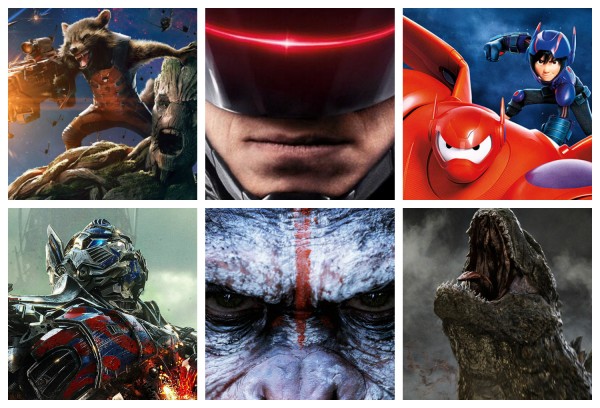 On Feb. 6th we kicked off the voting for our second annual celebration of the best in geek cinema, the Mythies. The week-long voting period lead to some very interesting and at times extremely close results.

One thing that was abundantly clear was the absolute domination of Marvel Studios over every other facet of geek cinema, with wins in the Best Superhero Movie, Best Villain, and Best Meta Element categories, and taking first and second in the Best Non-Human Hero category. Although not Marvel Studios, a Marvel character also raced out to a big lead in the Best Superhero Moment category and never looked back. Granted almost every superhero film of 2014 was a Marvel adaptation and they were among the most watched movies of the year, but that’s still a testament to general quality that Marvel has managed to bring to their projects, especially compared to the relative indifference voters had to non-Marvel Studios Marvel properties. Well, okay, just Amazing Spider-Man 2.

There was one category, however, which defied this trend. Best Animated Film saw a Marvel property (albeit a Disney production) lose to a film with a heavy presence of DC characters. With no DC movies scheduled for release this year, we’ll have to until 2016 to see revisit this battle.

Continuing for last year, where The Hunger Games: Catching Fire pretty well swept every category it was nominated in, this year’s Mockingjay Part 1 won by the second largest margin in the more narrow yet surprising robust Best YA Dystopia Adaptation. Yet the same film placed last in the Best Non-Superhero Hero Movie category. Hopefully this year’s Mockingjay Part 2 returns the series to genre-defying form.

Opposed to the many blowouts of last year, particularly in categories which included either Hunger Games or anything involving Chloe Grace Moretz, several categories were extremely close. Best Non-Human Hero saw one teammate edge out another by two votes, Best Original Genre Movie was decided by only one vote, and Best Low-Medium Budget Film resulted in an exact tie between an Oscar favorite and a film which shares its title with a Marvel character. We’re not saying that had anything to do with the voting, but it’s a fun coincidence… or is it?

Lastly, while we differ over animated films, YA adaptations, and original genre movies, our own editors’ picks line up quite closely with the readers’ voting. This proves that our readers have excellent taste. Usually.  😉

All right, enough opening monologue, here are the winners of the 2nd Annual Mythies Movie Awards. 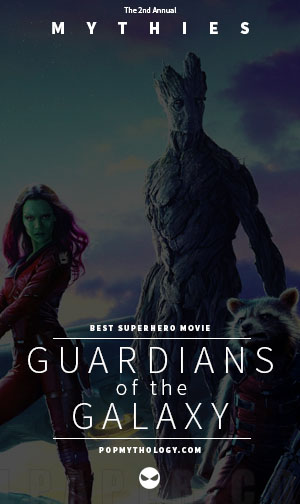 While Guardians pretty well dominated the readers’ poll from beginning to end, it didn’t pick up a single editorial vote. Captain America: The Winter Soldier nearly swept the staff, its lone vote against being mine for Birdman. 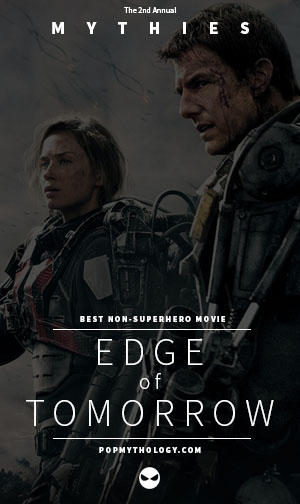 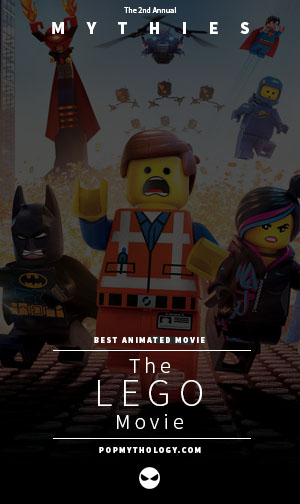 Despite my own vote for the readers’ favorite, Big Hero 6 took the editorial pick. Probably because of everyone else’s massive Marvel favoritism. It’s a conspiracy, I tells ya. 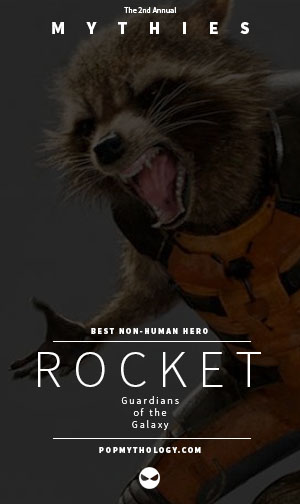 Instead of splitting the vote, Rocket and his personal muscle/houseplant Groot combined for a staggering 77% of all votes cast. Results were similar among Pop Mythology contributors where Rocket edged out Groot as the only two nominees to receive votes. 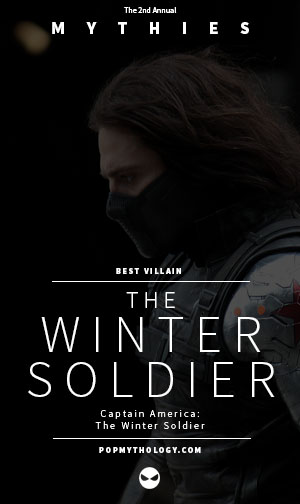 The sheer number of nominees reflects the goodness of the bad guys, but The Winter Soldier was the best of the bad for both readers and editors. And how couldn’t he? His name is in the title. 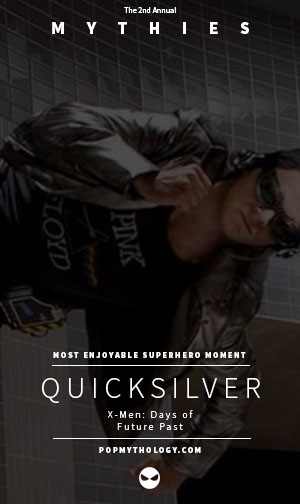 We all love dancing baby Groot, but the Quicksilver sequence in Days of Future Past was the most inspired moment in all of genre cinema last year. The readers’ poll was a lot closer than the editorial one as Quicksilver snatched up every vote. 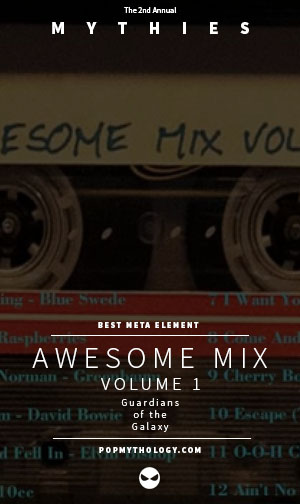 Awesome Mix Volume 1 lived up to this its name with the largest margin of victory in any category. Fittingly the Guardians soundtrack/general spirit won the editorial poll by the exact same percentage (66%). We can’t wait for Volume 2. 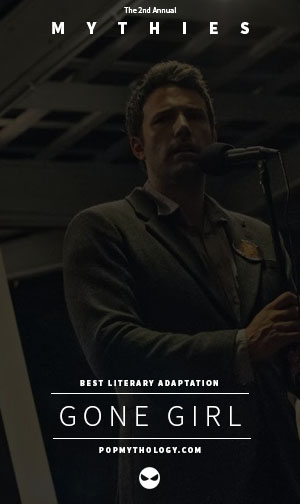 Nothing much to add here except that Gone Girl is great and that I may be the only person outside of the film’s producers who watched The Double. I still voted with the editorial pick of Gone Girl. 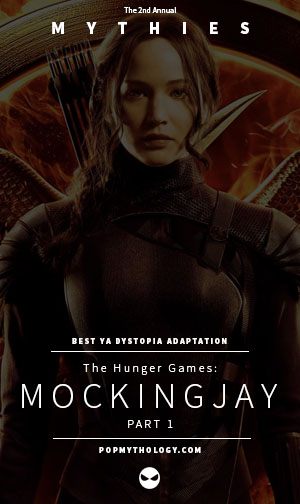 Well, as the readers’ pick Hunger Games series comes to an end, editors’ pick Maze Runner series has just started. With three of the four nominees continuing this year and more dystopias on the way, it looks like this award may reappear next year. 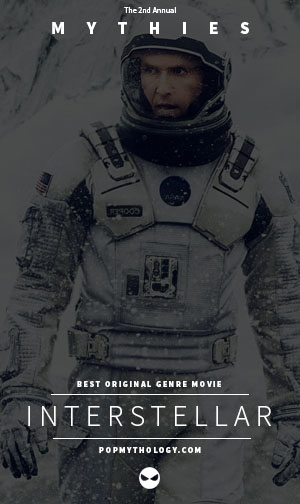 One single, solitary vote separated Christopher Nolan’s divisive masterpiece and the editorial pick of Birdman. As the only editor to vote in this category, I whole-hearted endorse this choice. 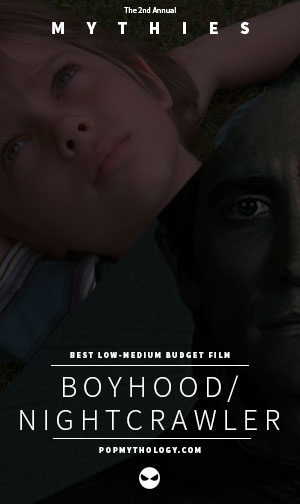 Boyhood and Nightcrawler may have finished in an exact tie in the readers’ poll, but it was The Imitation Game which took the editors’ pick. However, if editorial votes were added to readers’ votes, Nightcrawler would have the win. I’d like to add however that while I didn’t vote for it either, Top Five is a really good movie which more people should see. Hell, these were all good movies, otherwise they wouldn’t have been nominated. Proves that you don’t need hundreds of millions of dollars to make a good movie.

That’s it, folks. Thank you for voting. We hope you’ll do so again next year. See you at the after party.