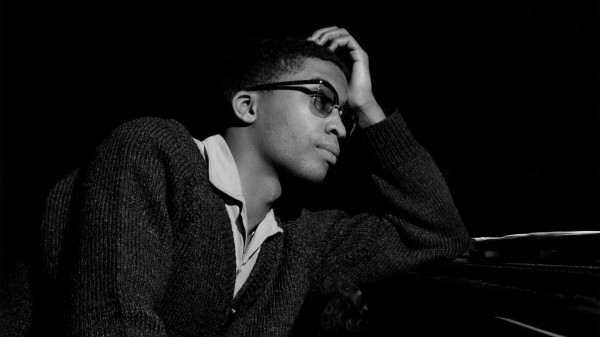 Although jazz had its high water mark of popularity back in the early sixties. Back then, Jazz pianists were often thought of as cool, smooth stylists in sharp suits tinkling the ivories in an exclusive, smoky basement club. Here are a few keyboard wizards who dazzled audiences with their fleet fingers way back then.

One of the big names in American jazz, Thelonius Monk was one of the creators of the bebop style and was famed for compositions such as ‘Round Midnight’, ‘Blue Monk’ and ‘Epistrophy’. Monk had an angular, sparse playing style, incorporating dissonant harmonies and silences into his compositions and improvisations.

Monk’s prolific career saw him make seventy recordings and play with John Coltrane, Miles Davis, Sonny Rollins and  Dizzy Gillespie, amongst others. As well as his music, he was also known for his unique taste in hats, suits and sunglasses. In 1964, he became one of only four jazz musicians to be featured on the cover of the prestigious ‘Time’ magazine.

Powell’s career was punctuated with time in psychiatric hospitals and several brushes with the law. Despite these setbacks, his contributions to Blue Note recordings such as ‘Un Poco Loco’ and ‘Parisian Thoroughfare’ garnered considerable critical acclaim. He died in 1966 of tuberculosis.

Even if you’ve never owned a jazz record, you’ll have heard ‘Take Five’ by Dave Brubeck Quartet. Brubeck’s recordings and live performances were very popular in the 1950’s thanks to building up a following off the back of many college campus tours and playing jazz clubs in all the major US cities.

In 1954, Brubeck appeared on the front cover of ‘Time’ magazine as the magazine profiled his rise to prominence on the American music scene. In 1959, the Quartet released what was perhaps their most famous album, ‘Time Out’. This collection of original compositions was the first jazz album to go platinum and featured different time signatures throughout the record.

Red Garland got his big break in 1955 when he joined the Miles Davis Quartet, playing important albums such as ‘Relax’, ‘Round about Midnight’, and ‘Miles: The New Miles Davis Quartet’, amongst others. Red’s ‘block chord’ technique was unique at the time and influenced many pianists that followed him in the genre.

Evans made his name in Miles Davis’ band in 1958, alongside John Coltrane and Davis himself, recording ‘Kind of Blue’ which went on to become the best-selling jazz album of all time. He went on to record albums with Tony Bennett, Jim Hall and lead several three piece bands, garnering 31 Grammy nominations for his work.

Nicknamed the ‘Maharajah of the keyboard by Duke Ellington himself, this Canadian pianist went on to perform and record with such jazz luminaries as Joe Pass, Count Basie, Herbie Hancock and Louis Armstrong over a period of over 60 years. He made over 200 hundred recordings and his work won him no less than eight Grammy awards.

Chicago native Hancock was a classically-trained child piano prodigy who at the age of 11, performed a Mozart piano concerto with the city’s symphony orchestra. As an adult, Hancock became the pianist for the Miles Davis Quartet, appearing on recordings such as ‘Sorcerer’ and ‘ESP’. After leaving the band in 1968, Hancock struck out on his own, incorporating collaborations with musicians such as Oscar Peterson, as well as pursuing a solo career. In the 1970’s his solo work followed a more disco/funk direction and in the 80’s his instrumental single ‘Rockit’ and its video became a hit with the MTV generation.

In addition to his solo albums, Handcock has composed several film soundtracks, including ‘Death Wish’ and ‘Blow-up’. Over the course of his career, Hancock has received fourteen Grammy awards and one Oscar for his soundtrack for the film ‘Round Midnight’.