Irvine Welsh wants to take you on ‘A Decent Ride’

Irvine Welsh is deeply immersed in the seamy sides of life, but the tone of 'A Decent Ride' is never dark or brooding. It does not shy away from ugliness, but Welsh serves it up with irreverent humor and panache.

Before you consider reading this book (or, perhaps even this review), I would urge you to take a brief personality quiz. Bear with me, this won’t take but a moment. Consider the following Venn diagram: 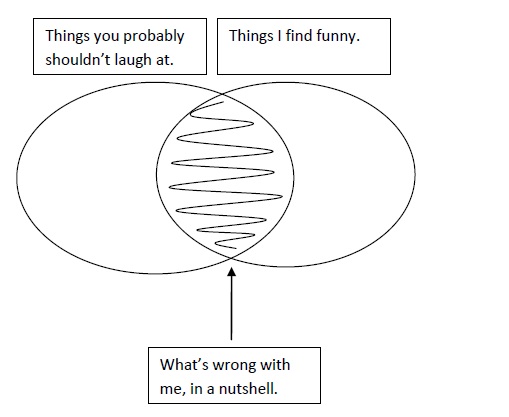 Now ask yourself whether or not you identify with this. If you do, then proceed; you will love this book. If not, well… you should probably take a pass.

Okay then, on to the book. A Decent Ride (and, oh yes, we are talking about that kind of ride) is set in Edinburgh. But this is not the touristy castle-bedecked Scottish capital – there isn’t a kilt or a bagpipe in sight. This underside of Edinburgh is much more like Charles Bukowski’s L.A., only with crappier weather.

Our fearless escort through Edinburgh’s underclass is “Juice” Terry Lawson. “Juice” Terry is nominally a cab driver who deals blow (or “ching” in the Scottish vernacular) on the side, but has also been known to star in a porn flick from time to time. He is also one of those men for whom the term “priapic” was devised to describe. And he is quite talented at providing a decent ride such that his taxi services are in constant demand. Many of us have encountered an individual that there was nothing he/she wouldn’t screw, drink, snort, ingest, or smoke at least once and maybe twice just to make sure. This would be an accurate description of Lawson.

“Juice” Terry is our driver and we get to side-along with him on his adventures through town. While helping out a friend manage his “sauna” while vacationing, Terry stumbles across a puzzling disappearance of one of the “lady employees.” In trying to solve this mystery, he encounters ever more strange events and odd characters, quite a few of which he seems to be related to through his father who seems to have sired half the town. One of the most interesting story lines involves a character modeled after Donald Trump. “The Donald,” who goes by the name of Ronald Checker, is in town to acquire a rare whisky and engages Lawson as his private driver. Checker is quickly sucked into “Juice” Terry’s hi-jinks and the two experience a series of crazy romps that would make Hunter S. Thompson proud.

In short, A Decent Ride is exactly that. While Welsh is deeply immersed in the seamy sides of life, the tone of the book is never dark or brooding. It does not shy away from ugliness, but Welsh serves it up with an irreverent humor delivered with such panache that can make one laugh at just about anything.

“Juice” Terry is a masterfully drawn character that will have all readers thoroughly and completely besotted with him by the end of the book. I have but one hesitation with the book – I would have loved to listen to it in audio form. Many of the characters speak in a thick brogue, which is true and right, but I found myself wanting to hear it aloud to make it even more so.

Irvine Welsh is deeply immersed in the seamy sides of life, but the tone of 'A Decent Ride' is never dark or brooding. It does not shy away from ugliness, but Welsh serves it up with irreverent humor and panache.
Facebook Comments