REVIEW: ‘Solace for the Condemned’ delivers redemption via sonic brutality 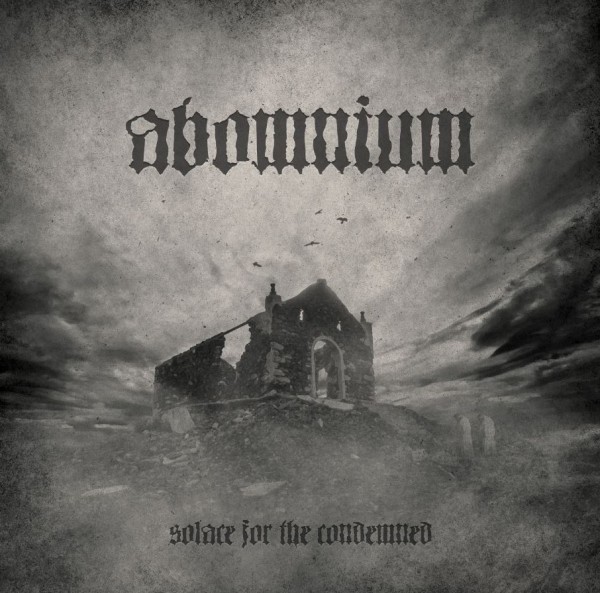 Somewhere on my very long lists of articles to write someday is a Top 10-style list of recommended extreme metal albums for those who don’t like extreme metal (“extreme metal,” for those unfamiliar, being the overarching category that includes various subgenres like black metal, death metal and grindcore). Well, I don’t know when I’ll ever get around to that piece as there are so many others I need to write, but I’m pretty sure that Abomnium’s  Solace for the Condemned—an exhilarating fusion of  black, death, and thrash—would need to be on that list. And along those lines, this review is primarily geared towards those who would consider themselves just casual metal fans or even not metal fans at all but lovers of music. (You die-hard headbangers, after all, already have metalstorm.net or terrorizer.com).

Solace for the Condemned  is the third offering from Abomnium, the gifted one-dude band otherwise known as Sapient (mild-mannered human alter ego, Peter Watkinson), and his second album with the British label UKEM Records.

First, let’s talk sound. For those who don’t enjoy the intentional low-fi quality that’s a common trait of black metal, particularly during the 80s-90s, Solace offers such a clear sonic tapestry of production wizardry that going back and re-listening to some of those trailblazing albums might become an even more frustrating experience (looking at you, Under a Funeral Moon). Personally, as much as I’ve always found the low-fi aesthetic fascinating, I do ultimately prefer a cleaner sound since it helps me to better appreciate the rich textures and attention to details.

And both detailed and richly textured this album is, all throughout weaving together rousing riffs, powerful vocals, and deft tempo changes into an extremely gratifying, atmospheric and coherent whole. Never mind genre labels: this is melodic, soulful and deeply felt music.  Now, I know that the moment black/death metal elitists hear words like that they think, “Oh, then I’m sure gonna stay the hell away from that.”  But that would be to their own detriment because I can assure you this album has plenty to brutalize and scorch your soul whether it’s the propulsive album opener “Condemned,” the Middle Eastern-inflected  “Yad Al Jauza”  (which will seriously make you want to get up and do a whirling dervish dance), the Emperor-esque “The Walking Man” or the full throttle thrash attack of “Paths of the Dead.”

Despite the common misperception that the vocals in black or death metal all sound the same, there is actually a fairly diverse spectrum ranging from the serpentine shrieks prevalent in black metal to the lower, more guttural growl that characterizes death metal. And one of the enjoyable things about this album is hearing Sapient subtly shift his vocal timbre, sometimes in the same song. (You can hear an even wider range if you listen to his previous albums, Rites Like Chains [2011] and Coffinships [2013], the latter being just as amazing as Solace.)

The lyrics here are nebulous and sparse, providing just enough evocative visual imagery but often remaining vague enough to allow you to project your own dark fantasies  and reveries onto them. “Crown of Feathers,” for instance, had me envisioning a sort of ancient raven god awakening to the world. “Witchlight,” an epic 7-minute track, is sort of the epitome of this lyrical approach as it offers just a tiny handful of words that could easily stand in for many things.

Perceptive listeners/readers may even notice what appears to be a conscious coordination of song sequence and titles with the underlying themes and title of the album as a whole. The first song, “Condemned,” involves the angels Munkar and Nakir passing divine judgment on the narrator. Now whether you interpret this from a metaphorical viewpoint or from the literal, eschatological one, there’s no denying that that’s about as condemned as you can possibly get. But gradually, over the course of the album, one song after another evokes a sense of rising and coming into being until, finally, the album closer, “Solace,” is a triumphant anthem of strength, courage and resilience against the trials and horrors of human life:

Be warmed by the gift of life

We are the few

We are those who stand

Never defined by our scars

But by our own pure grace

As beautiful as any words as I’ve ever encountered in any metal album. Solace for the condemned, indeed.

I admit that a lot of black and death metal can be  genuinely difficult for many listeners to approach. The artists even pride themselves on that since the roots of the genres, after all, grew out of anti-establishment, countercultural impulses. The fans too, especially the hardcore ones, relish being part of a musical sub-culture that others find puzzling or even outright discomfiting. It’s an understandable but somewhat unfortunate Catch-22 in which that outsider status is part of the appeal and yet there are aspects to both black and death metal that I feel could speak to more people in a profound way if only they gave these genres a real chance.

Barring that, however, it’s up to the right kind of artist to find ways to satisfy both seasoned fans and timid newcomers to the genre. I believe Abomnium is one such artist. I don’t know if he is doing it consciously (and it doesn’t really matter), but he is writing some of the most listenable and readily accessible extreme metal I have the pleasure of being able to recommend—not just to metal fans, but to anyone who loves music.

So whether you ever find yourself feeling condemned in any way or not, Solace for the Condemned  is truly a work that offers both sonic ferocity and spiritual solace. Much of the solace, for me, also lies in the fact that there are consummate craftsmen like Abomnium/Sapient out there who are finding ways to deservedly bring extreme metal subgenres to a larger audience without sacrificing an ounce of the music’s integrity or letting it be any less “black” than hardcore metalheads would want it to be.

Stand and be numbered. Be numbered among the few.