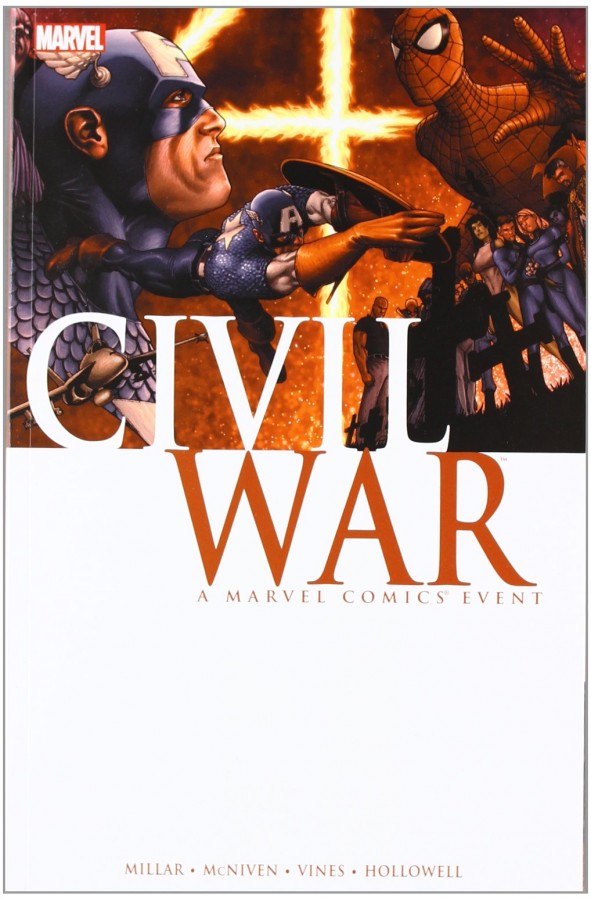 With Captain America: Civil War raging in theaters, it is a good time to take a look at the comic that inspired it: Marvel’s Civil War (2006-07) by Mark Millar and Steve McNiven. Like Frank Miller’s The Dark Knight Returns [DKR](1986) and Alan Moore’s Watchmen (1986-87), which have both already received the scholarly treatment here, Civil War pits superheroes against one another in a battle to decide the proper role of super-powered crime-fighters in a democracy.

Civil War is set against the backdrop of the “War on Terror.” The government passes the Superhuman Registration Act in response to a 9/11-like calamity in which a battle between superheroes and supervillains causes the death of six hundred people in Stamford, Connecticut. (The connection between the real and fictional catastrophes is made clear in the artwork of the first issue, which depicts superheroes searching for survivors in the rubble, evoking images of New York City firefighters at Ground Zero.) Just as “9/11” became shorthand for the September 11, 2001, terrorist attacks on the World Trade Center and the Pentagon, “Stamford” becomes a one-word reference to the superhero-caused tragedy. The Act requires all active superheroes to register with and serve the federal government. The first order of business for the heroes complying with the Act is to hunt down those who refuse, leading to the titular civil war.

This rooting in post-9/11 America, renders Civil War, in Roz Kaveney’s eyes, “the most intelligent piece of political comment, protest and analysis that the comics industry has ever produced.” Terry Kading writes about how the real-life supervillainy of 9/11 generated “the mood and the tenor of the superhero narrative, but without the benefits of the superhero.” Without the satisfaction of an avenging superhero to vanquish our attackers, we live in “a more ominous and insecure environment than we have known.” Against this backdrop, Civil War presents difficult questions with no easy answers.

Like DKR and Watchmen, Civil War deals with the proper role of superheroes in society. But where the governments in the earlier works are nearly as evil as the supervillains, the government in Civil War is consciously modeled after the real-world Bush administration’s response to 9/11. In both the real and fictional universes, the government responds to an external threat by restricting civil liberties, reflecting, in Travis Langley’s view, a natural human desire to place security ahead of freedom.

The opposition to the Registration Act is spearheaded by Captain America. Unlike Batman in DKR and Rorschach in Watchmen, Captain America is no vigilante. He has been a government agent his entire life, but he refuses to enforce a law that criminalizes “people who risk their lives for this country every day of the week.” He is the embodiment of American values, which are obviously not always synonymous with government policy. Kaveney describes him as “perhaps the closest thing the Marvel Universe has to a moral centre.” The fact that Captain America leads the resistance suggests that we are to sympathize with its struggle.

Iron Man, on the other hand, has long been associated with the U.S. government as a military contractor and even as a former secretary of defense. As both a weapons manufacturer and weapon himself, he literally embodies the military-industrial complex. But his support for the Registration Act is principled, motivated by a sense of collective guilt for Stamford tragedy:

As far as I’m concerned, Stamford was our wake-up call. What alcoholics refer to as a moment of clarity. Becoming public employees makes perfect sense if it helps people sleep a little easier.

In the end, Captain America has Iron Man defeated when a group of civilians jumps in to stop him. At this point, Captain America realizes he has won “everything except the argument.” He recognizes the irrationality of, in Langley’s words, trying to “beat someone else into seeing one’s rationale.” Given the opportunity to behave heroically, even in defeat, Captain America must take it.