REVIEW: ‘Avatar and Philosophy’ will help you to see, but only if you’re a fan 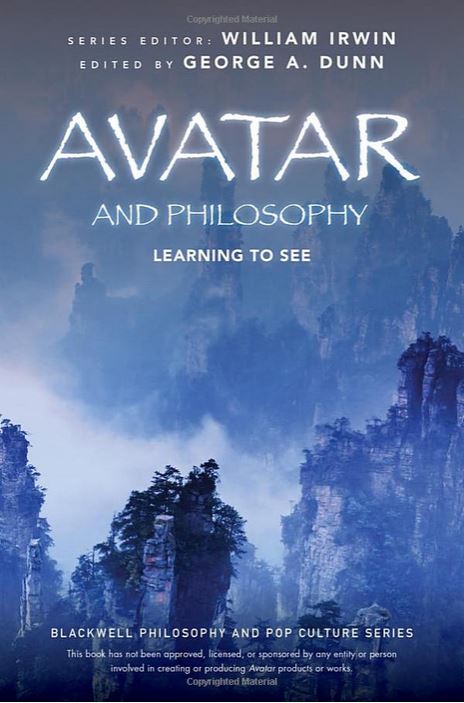 Avatar and Philosophy: Learning to See is the latest entry in Wiley/Blackwell’s long-running Philosophy and Popular Culture series, which began with the surprise hit, South Park and Philosophy: You Know, I Learned Something Today (2006, edited by Robert Arp). More than 40 volumes later, the series continues to use well-known works of popular culture to illustrate philosophical concepts. The Wiley/Blackwell website offers a pithy justification for the series: “A spoonful of sugar helps the medicine go down, and a healthy helping of popular culture clears the cobwebs from Kant.”

According to the jacket copy, “the book explains philosophical concepts in a fun and accessible manner that will appeal to all levels of readers.” This is a bit of a stretch. Although not as dry as most scholarly writing, these essays are still clearly the product of academics. The writers aim for an intelligent readership, but do not assume any prior knowledge of philosophy.

I can envision two main audiences for this book. It would work well as a supplemental text in a philosophy course, providing students with easily-understood illustrations of concepts like just war theory, feminine care ethics and Hegel’s Philosophy of Nature (1830). Most of the essays are grouped thematically, so, for example, a reader could explore three different ethical paradigms—business ethics, Native American philosophy and animal rights—in the section entitled “Seeing Our Ethical Responsibilities: ‘Sometimes Your Entire Life Boils to One Insane Move.’” But to really develop a coherent understanding of how these concepts relate to each other, one would need a more general survey of classical and contemporary philosophy.

The other main audience would be fans of the film who want to delve deeper into the questions it raises. The central thesis of this book and the others in the series is that popular works are more complex than they appear and that this hidden complexity will reward thoughtful analysis. I agree with this idea.

The main problem for me, however, is that I am just not that into Avatar. The premise of operating another creature’s body is cool, and the visual effects are gorgeous, but the characters are all cardboard cutouts acting out an obvious morality play. Avatar really is just “Dances with Smurfs” (2009) as it was lampooned on South Park—a show that is, by the way, a far more interesting popular work and one that made a second appearance in the series in 2013 with The Ultimate South Park and Philosophy: Respect My Philosophah! (edited by Arp and Kevin S. Decker). This view is explicitly supported by Dennis Knepp’s contribution here, “We Have an Indigenous Population of Humanoids Called the Na’vi’: Native American Philosophy in Avatar.”

And while the contributors to this book can’t be blamed for the film’s weaknesses, those weaknesses made it difficult for me to wade through these detailed analyses. I just don’t care enough about Avatar to get much enjoyment out of 250 pages of explication. For those who are really into the movie, though, this book will deepen their appreciation.

The anthology format is both a strength and a weakness. On the plus side, it offers a wider range of viewpoints and theoretical perspectives than would a single-authored work. But since all the contributors wrote their essays without knowing about the others, the anthology feels repetitive at times, with the same handful of scenes subject to multiple dissections.

Avatar and Philosophy is a difficult book to assign a rating to. The book absolutely succeeds in what it sets out to do—to provide “an engaging look at one of the most thought-provoking and popular movies of recent years.” But the audience of Avatar enthusiasts who are interested in digging this deeply is likely a narrow one—and does not include me. But if you love the film and want to explore its deeper meaning, Avatar and Philosophy: Learning to See is the book for you.