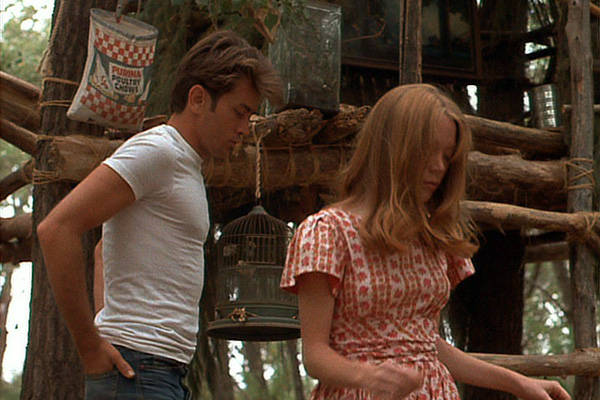 Over the course of four decades Terrence Malick has slowly turned farther away from traditional cinematic narrative and closer to pure narration over beautiful imagery. Badlands, Malick’s first film, has a straight forward narrative and lacks the cinematic poetry that has become his signature, but clearly displays the first steps towards the unique path the filmmaker would follow in later years.

Based upon a real-life killing spree across Nebraska and Wyoming in 1958, Badlands focuses on a pair of teenagers so self-absorbed that they’ll let nothing, not family, not law, not morality, break them from what they most want. Unfortunately, they don’t really know what it is that they want, other than to be somewhere else together. The leads, played by Sissy Spacek and Martin Sheen, are connected but distant. Each event which drives them closer together also pushes them apart, yet being teenagers, particularly for Spacek, they are doe-eyed and consumed with the idea that they among all people are destined for greater things, ambitions which contrast their dead-end lives, and romanticism which belies the grim, violent realty they create.  Although playing late 50’s teenagers in an early 70’s film, there is something strikingly and disturbingly modern in Kit and Holly’s callousness and disinterest in life.

Badlands in many ways feels like the movie that Quentin Tarantino has spent his entire career trying to make: stark, quick, casual violence bookended by non-sequitor dialogue, an unusual couple making life look simple and pretty, and odd, dry, ironic humor exchanged between characters, especially before or after violence, however with a terse, stripped down script which makes every line feel important, as cliché as Spacek’s romantic pining may be. All of this is contrasted beautifully with the endless plains of the American heartland. It’s an astonishingly confident effort by a first time filmmaker, and one that remains a touchstone for others even decades later.

The fact that Badlands is a lesser known work, even among Malick’s esoteric filmography, argues that fans of modern American crimes movies should make an effort to view the older, quieter films in the genre and not just louder more stylized ones which came after. [subscribe2]