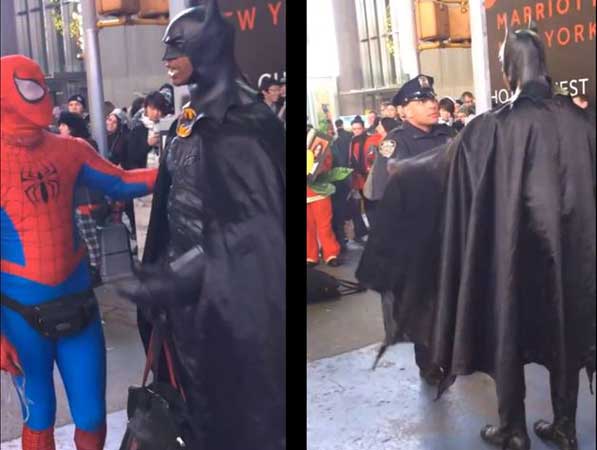 As much as Batman may push the limits of what’s acceptable  in his tortured pursuit of justice, one thing he does not do is curse profusely and act like a thug in front of kids who look up to him.

There’s just one thing I’d like to say to the man under the cowl in this video and that’s this:

Dude, I don’t know what that passerby did or said to provoke you, and you may very well be justified in your rage, but if you’re going to hurl such obscenities around like so many batarangs, do me a favor and take off that costume.

Why? Because that costume you’re wearing is a powerful symbol that’s known the world over and cherished, even worshiped, by people both young and old.

Kids don’t know that you’re just some guy with a part-time job to promote something by wearing that suit in Times Square. And even if they do know that you’re not the real Batman, there’s something disturbing to them about seeing someone in a suit that represents order and justice behave in such a disorderly way (hey, he’s not that dark!). Like a drunk Santa Clause groping a female department store employee, it taints the image of their beloved pop culture icon which is not even just a pop cultural icon anymore but practically an “icon” in the original religious sense.

I gotta say, though, the guy in the Spider-Man suit certainly lives up to Spidey’s peaceable image by patting angry Batman on the back and trying to calm him down.  Good job, Spider-Man guy.