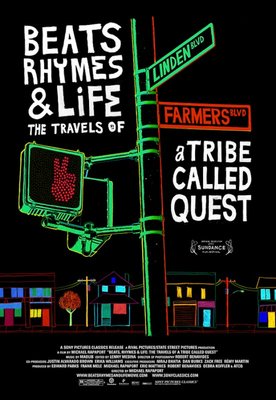 As much of a celebration as it is of A Tribe Called Quest’s time as one of hip-hop’s first truly great groups, it’s hard not to notice the tinge of loss in the way each member speaks of past glories in Beats, Rhymes & Life: The Travels of a Tribe Called Quest.

The friendship between Q-Tip and Phife Dawg, from beginning to end to (seeming) reconciliation, is documented in a way that presents not only two but four sides of the story. Rapaport presents Tribe’s journey as a history of hip-hop’s growing acceptance as art with a visual style perfectly in tune with their early 90’s aesthetic and, of course, plenty of Tribe songs.

Unlike most modern documentarians, Rapaport stays almost entirely behind the camera, leaving the members of the group, and those associated with them, to speak without inserting his own commentary.  As with A Tribe Called Quest’s music, the film’s audience is undoubtedly limited, but those who listen will be enlightened while those who don’t will miss out. [subscribe2]