Tim Burton’s ‘Big Eyes’ turns the gaze back onto you 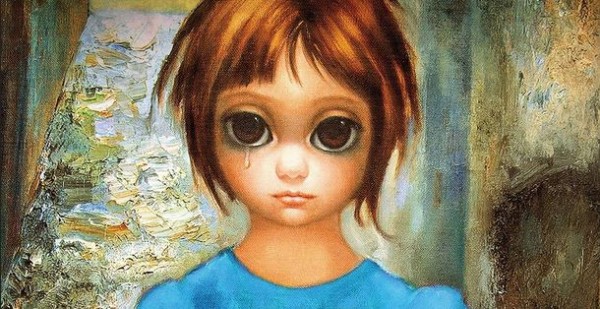 If a film based upon the paintings of Margaret Keane should be made, it should obviously be done by Tim Burton. The ubiquitous waifs, with their big, dark eyes and colorful attire over dull backgrounds, are the exact sort of sinister charm that Burton has built his entire career on. Combined with the 1950’s aesthetic and Northern California setting and Keane’s story (both Keanes) seems like it was specifically crafted just so Burton could later adapt it. The odd thing is that, despite playing into almost every one of Burton’s tendencies, Big Eyes isn’t a terribly Burton-esque film. It’s not as big of a shift as Walter Keane’s cityscapes to “his” waifs, but there is a parallel.

In almost all of his real life movies, meaning those which don’t take place in fantasy worlds like Alice in Wonderland or Planet of the Apes or reinterpretations of historical periods like Sweeney Todd, Burton is constantly playing with the darker side of the American ideal, the one looked so fondly upon through the rose-hued cat eye sunglasses of people who pine for good old days that never really were. Margaret Keane’s story allows Burton to target the pervasive lies of that period so intensely, particularly that of a woman’s role in society, that there is almost no need to call overt attention. The theme itself is so embedded into the story of Walter Keane hijacking his wife’s art that any additional focus would feel heavy-handed. Instead, Burton pulls in other related and equally compelling topics.

Big Eyes very well captures several of the faults in the art world and the cult of personality that surrounds many artists, a phenomena that has only grown with social media and entertainment news allowing people to become “celebrities” despite not producing anything themselves. Artists who are famous for a name or a fashion rather than for their actual art. This commentary opens up further discussion on what art is, what makes it good, who decides what is good, and what its role is in life. Answers to these questions come through the inclusion of Terence Stamp as New York Times art critic John Canaday, whose opinions serve as a meta-criticism of criticism itself, ostensibly detailing the division between critic and audience and asking who should decide whether, say, a movie should be considered high art or not. The art world as depicted in Big Eyes is a place where buzz and influence mean more than skill, where presenting yourself as an artist is more important than being an artist. In that sense, Big Eyes becomes a sharp satire even without turning much of its focus away from the central narrative.

This same lack of thematic flash is reflected in the film itself, with only a few flourishes here and there providing break from what’s primarily a straight ahead biopic. While other characters play minor roles, the dependency upon Amy Adams and Christoph Waltz as Margaret and Walter allows both of them ample opportunity to flex their acting chops on screen.

Waltz is of course the bigger, flashier of the two, chewing scenery in a way consistent with a pathological attention-grabber. Meanwhile Adams is quieter and more composed, often playing background to Waltz’s focal point. At times this means that she can almost be forgotten, even as the protagonist, but it’s also an element built from the character and the story. Where Walter wants to be in the spotlight, Margaret is either willing or coerced into giving it to him. The same is true with the performances. However, as with Margaret, when given the chance, Adams shows herself more than equal to her male counterpart.

Thus the interplay between the two leads reflects that of the characters and the film as a whole, making up for the complete lack of interesting supporting characters. Sure different people pass through their lives, but none of them seem to register enough to have a name beyond their role (journalist, daughter, gallery owner, friend, critic, judge, etc.).

Similarly, the lack of style could actually be to blame for Big Eyes feeling somewhat unfulfilling in its examination of its themes or its criticism of art and domesticity. In other places small details distract from creating a believable representation of 1950’s San Francisco (I know I said this about Big Hero 6 (see review) but the city is not that sunny, and anyone who’s been there for a year knows you don’t need heating oil in the winter, at least not before global climate change wrecks the whole country). Yet these minor critiques focus more on what we as audience members expect of the personality of Tim Burton and not what would best serve the art that he’s presenting on screen. It’s here that Big Eyes turns its critique on us, as an audience, and what makes us interested in the film. Is it the story and the characters, or the people behind the story? Is the art or the artist?