Captain Kirk’s log: Variety is the spice of comics

I’m really impressed with the overall level of variety in this week’s selections. In fact, I don’t think I remember a selection with such a great variety of choices.

Variety… it might be cliché but it’s what makes life truly interesting, isn’t it? And that’s the great thing about comics: it’s a medium of great flexibility. There are a range of art styles from the straightforward styles of artists like Greg Land to the experimental ones like Ray Fawkes. Comics can either be episodic or stand-alone stories making you either wait or revel in the satisfaction of a story well-told. Comics can envision unique stories, continue adventures of familiar and well-loved heroes, or even re-imagine existing stories in new ways.

There are examples of all of these types in this week’s list. Let’s take a look.

Guardians of the Galaxy #21 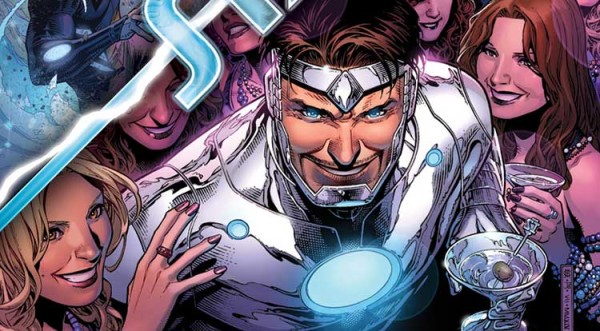 You know, as much as I’ve panned this event for its lackluster start and twisted happenings, this issue actually wasn’t all that bad.

I was actually entertained by the re-imagining of classic Marvel villains like Loki, Sabretooth and Mystique battling on the side of the angels. I got a bit of an ironic charge at seeing Sabretooth admonish Nightcrawler at being one of the people that Logan never lost faith in. It was somewhat of a revealing perspective of Sabretooth’s relationship with Wolverine that was a bit more insightful and poignant than Sabretooth would typically present. Loki’s devotion to his amoral brother Thor, was even a little refreshing. In short, the entertainment value in this issue was fairly decent.

Of course, in terms of continuum, I want to know how Chris Claremont will reconcile this in his run on Nightcrawler, but, if you read my post last week, I get the feeling that he won’t care.

Guardians of the Galaxy #21

Fairly humdrum, but a feature of note is the developing relationship between Kitty Pryde and Peter Quill.

Yeah … for realsies. I’m feeling a little uncomfortable with this.

Okay, for comic readers in my generation, Kitty Pryde was the ultimate girl: not only did she have super-powers, a genius-level IQ, but she was also really cute with that attainable, girl-next-door look. Moreover, she also knew martial arts and considered herself a nerd.

Colossus was an idiot; falling for some crazy alien healer chick and breaking Kitty’s heart in the Secret Wars? Yeah … there’s the real jerk for you. True, the got back together for a little bit in Joss Whedon’s run of Astounding X-Men, but all in all, I think I belonged to the club that considered Kitty their exclusive crush. 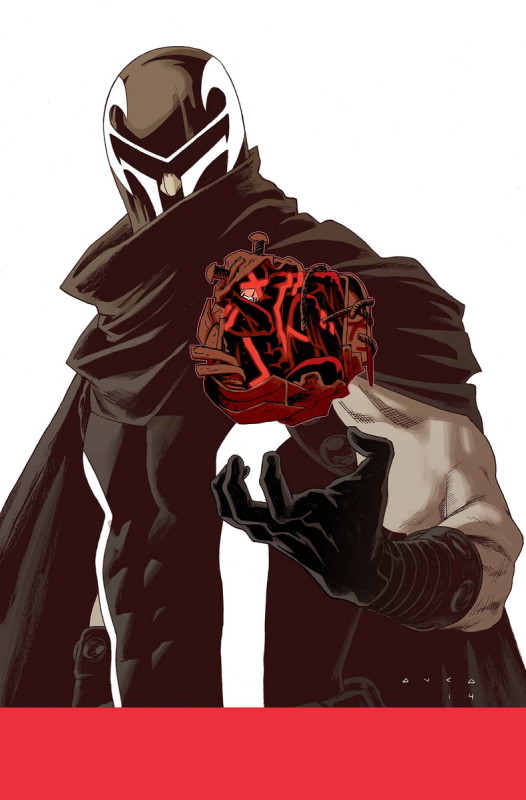 I’ve been following this series with a sense of renewed hope. Will Cyclops return to the fold from his revolution against humanity? Will the X-Men manage to re-unite in the wake of their schism and significant deaths? First Professor X and then Wolverine? Come on …

For a while, though, it looked like Cyclops was on his way with the combined investigation of a new Omega-level mutant with SHIELD and his former team-mates. I was sincerely hoping for some improvement in this direction until last issue when he simply disappeared with the new mutant to enlist him in his cause.

Not much happened in this issue. It was fairly disappointing to see Bendis hold on to this failing storyline. It was a bit of a filler issue. The end was a segue into another examination of this encounter, but I really don’t see any entertaining outcome to it. 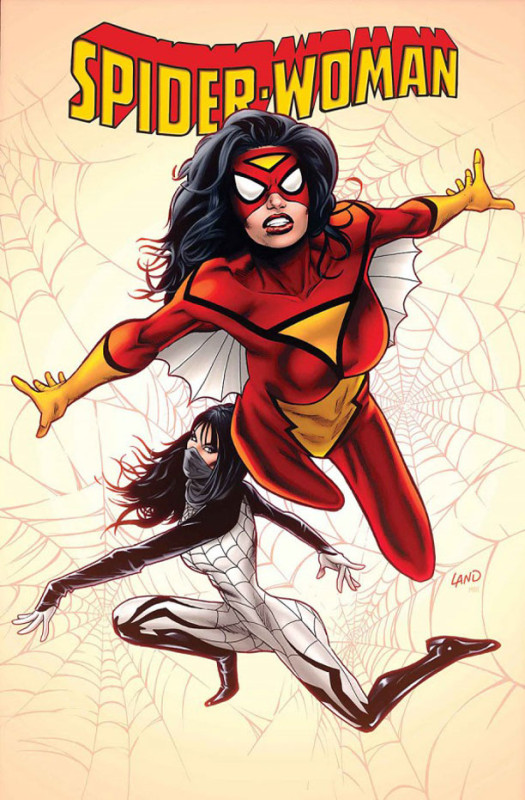 With all the hype around the cover of this issue, I was disappointed not to get one. Don’t get me wrong: I simply wanted one for the notoriety. However, I was dismayed to learn that DC was only allowing comic shops to get them if they ordered over a hundred of them per store. So I got the Land version – which I think is superior. Greg Land is a talented artist and I love his work. However, that’s pretty much it for this comic.

This series is a spin-off from the Spider-Verse event in which the latest Spider-hero, Silk, is being chased through a series of dimensions by a pair of hunters seeking to kill those who have Spider-powers in a number of different dimensions for their life-energy. It’s a bit of a far-fetched premise in itself to let lone justifying the existence of a new series. I have to say that while I enjoyed Land’s work, the entire premise of this story is laughable. This is not a good story and Marvel could have done a lot better with the property. There’s also a bit of an irony in that the first issue of this comic was written by a writer named Hopeless. 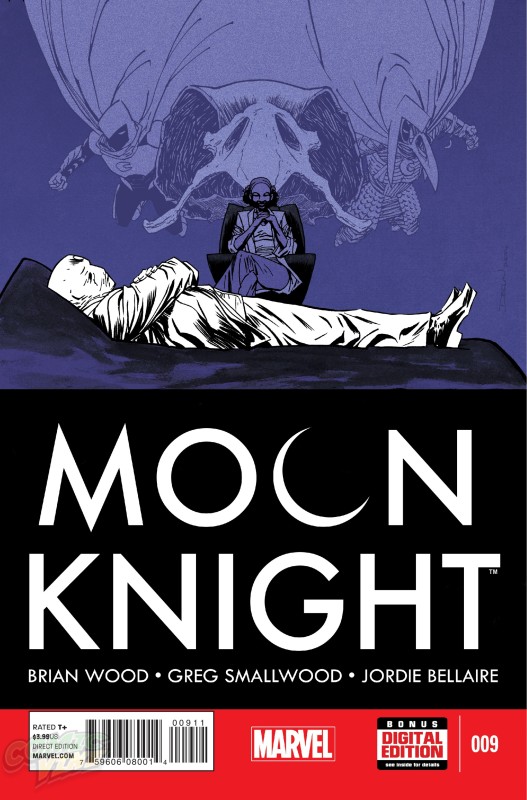 The best of the Marvel books right now. Moon Knight is a great mix of dazzling writing combined with solid art that truly draws in the reader with an in-depth look into the nature of Marc Spector’s relationship with the Egyptian god of travellers, Khonshu. What makes Spector such a ready avatar of this deity? If he had a choice, would it pick another human to carry on its work?

This is a great story.  It has depth, complexity and a realistic character with flaws and fallibility that makes him relatable. Buy this book. Brian Wood is a truly gifted writer who is never allowed to leave this book.

I’ll be honest, I didn’t understand this.

It’s a shame too … obviously using the original Charlton comic characters that went on to inspire The Watchmen, this comic tried to tap into the unique time-continuum perspective of Dr. Manhattan/Captain Atom but instead of providing an entertaining one, it was simply a confusing one. But it had a great deal of potential. It was great to see these characters in their original conception in the snippets of scenes that made sense, but overall, this story was vague and woefully obscure. I was really disappointed. 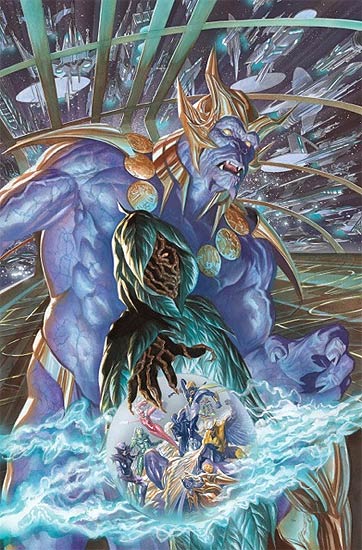 Another surprising disappointment. It seemed a bit disconnected and rushed. The premise was weak and hyperbolic. I just didn’t really care about a character who only had about a page of introduction and it wasn’t clear the character was the focus until the very end. It wasn’t the best story for this comic. 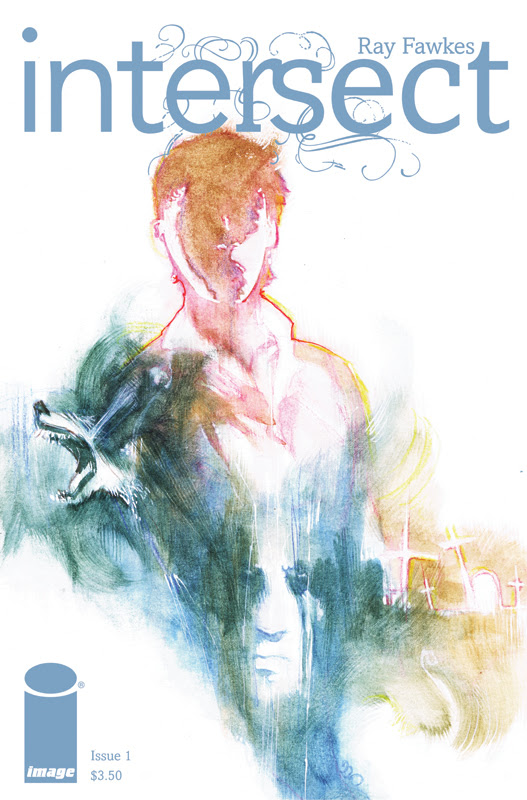 Ray Fawkes’ offering via Image Comics and I was a little puzzled by it. I found the art extremely distracting. It was hard to identify what was going on and to be frank, I really couldn’t focus on the story. I hate to say this, but I really wasn’t impressed.

Now this is a bit late. Steampunk BSG has been running for the last few months, but this was the first I was able to land a copy of the first issue. I have to say, I wasn’t disappointed.

The idea should be pretty obvious: a Steampunk version of BSG but what’s really cool is that it’s a re-imagining of the original television series created by the recently departed Glen Larson. Steampunk is awesomely fun in itself, but to have BSG re-interpreted this way is a really cool wrinkle. Like I said, it’s a bit late, but it’s an inspired creation from Dynamite Comics that I had to mention.

So there we have it: a real variety grab-pack. But there can only be one pick of the pull. For this week, it has to go to:

This is about as close to the original spirit of Marvel’s “House of Ideas” that was around in the 1960’s as you can get today.  Like I said, this comic draws you in. It is a subtly crafted story driven by a character that we can relate to through his flaws and imperfections. Marc Spector’s multiple personalities provide a variety of characterizations and perspectives of this book, and as we know, variety is what makes life – and obviously this comic – great.