Captain Kirk’s pick: Getting kids to think through comics 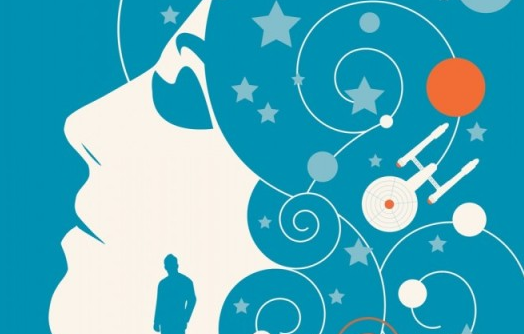 It’s Parent-Teacher Interview week and I have eleven comics to read. Luckily I’ll be probably talking comics with the parents, so this gives me a good start for the long evenings ahead.

I tell my students to read comics, not because they’re any easier; on the contrary, the presence of visual information in these books also adds a layer of non-textual communication and forces kid to think about the message that’s reinforced on a visual level. Implicit messages are more difficult to comprehend and, hey, if I’m forcing a kid to think, then I’m pretty much doing my job as a teacher, aren’t I?

Furthermore, what’s really cool is the conversation that we have about the backgrounds of the story and the characters and that’s pure learning gold. If a kid is engaging with you about a literary source of information, then that’s half your battle. At that point it’s fairly easy to give them a writing assignment or some other project once you have their buy-in. In the teaching world, that lends a degree of authenticity to your request and the ids accept you for it.

Comics … is there anything they can’t do?

Let’s take a look at the books that I’ll be hopefully talking about with parents this week.

Star Trek: The City on the Edge of Forever

Star Trek: The City on the Edge of Forever 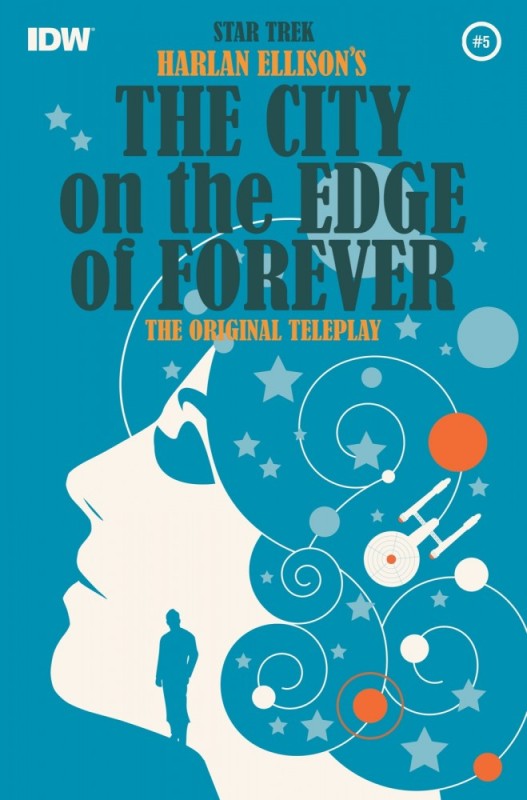 This will make an incredible hardcover. What I love about this re-visitation of Harlan Ellison’s amazing signature Star Trek episode is the detailed examination into James Kirk’s love for Edith Keeler. As opposed to the original episode where Kirk had to fall in love with Keeler in about 15 minutes, this five-issue series (which wraps up the whole story) shows us how they fall in love. It also touches on the early development of Kirk and Spock’s friendship and gain deeper insight into it. Spock finds Kirk – and humanity in general – puzzling but because Kirk still manages to thrive despite his incessant risk-taking and intuitive grasp of situations. He is the nature of humanity and nothing expresses humanity better in Ellison’s reasoning:

“We look at our race, this parade of men and women and the unbelievable harm and cruelty they do. And we sigh, and we say ‘perhaps our time is past. Let the sharks or the cockroaches take over.’ And then, without knowing why, without even thinking of it, the worst among us does the great thing, the noble deed, that spark of human godliness. And we say ‘perhaps the human race is entitled to a little more sufferance. Let them keep trying to reach the dream.’” 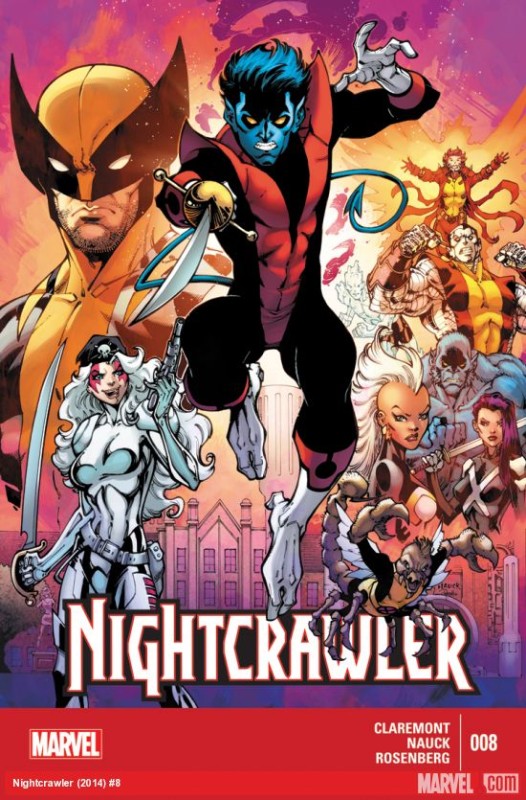 In the preamble, we read that Nightcrawler has found himself in a new world and is trying to find his place in it. He must do so without the guidance of his closest confidants and he is in a different world from the one he left behind.

Wait … are we talking about Nightcrawler or Claremont?

It’s easy to read between the lines and make speculations as to their potential meanings, but if you’ll bear with my idle speculation – is Chris Claremont thinking about jumping ship? If so, that’s a shame, because I’m enjoying reading Claremont dialogue again. This is a good comic – not great – but it’s a comic that brings us back to the days when comics were fun.

Nightcrawler was a swashbuckler. Now he’s a fairly morose and laments the death of his friends, the loss of his place in the after-life and those daring adventures he used to have in the Dave Cockrum  Nightcrawler mini-series from 1985.

I can understand why. The X-Men have lost that spark. They were about tragedy and drama, but they also had a spirit of playfulness about them that made them so compelling and endearing. I think the last thirty years have ground that out of them – especially the nineties – what a dismal decade for comics that was.

Now Nightcrawler – and Claremont – find themselves in this dried-up diaspora that the X-Men franchise has become and both are wondering what to do in it? Claremont needs to invent more characters, return Nightcrawler to his carefree adventurous days and set out on his own, just like Cockrum did. Maybe this issue will see the start of that. There were some initial developments – as well as the return of an old enemy – that might allow Kurt Wagner to return to his status of everyone’s favourite “Fuzzy-Elf” … wait, does that mean we need more Kitty Pryde too? Think about it, Chris. 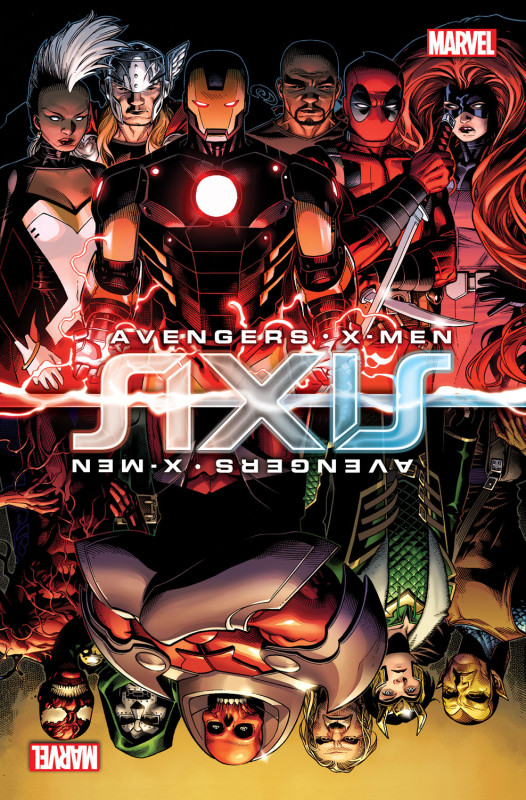 Marginally better this time. I don’t know if that’s because Terry and Rachel Dodson are on pencilling and inking detail or if the storyline of the inverted heroes and villains is a little more understandable. I’m not crazy about this series – I’m only buying it to understand a larger picture of the Marvel Universe as this event relates to it. In one word: meh. 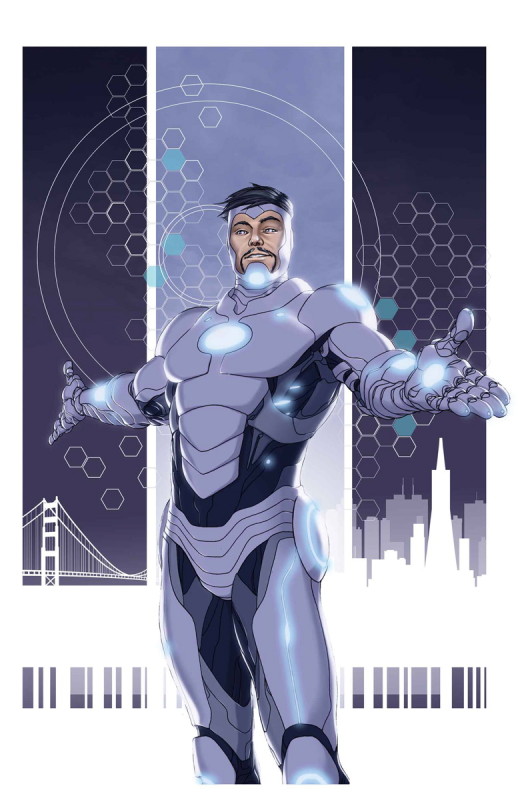 Wow … I have to confess, I really wasn’t expecting this. It’s on the heels of the Axis event – Stark is a re-aligned hero with severe character issues – including the demise of his sobriety. Not only do we see some really cool armour, but a new character dynamic between Pepper and Tony. The climactic ending to this issue really shows you how low Stark has fallen, but last page really had me wondering. Issue #2 will be worth picking up. Well done to writer Tom Taylor and artist Yildray Cinar – both unknown to me, but I’m glad to read their stuff. 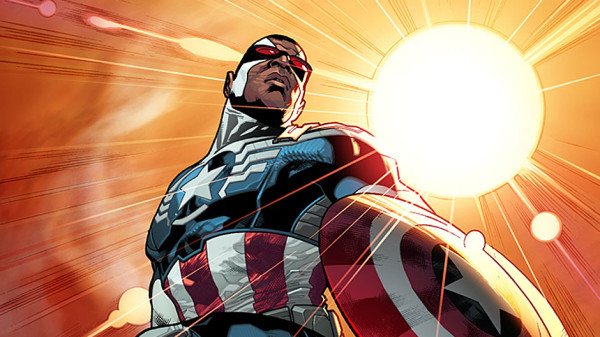 Sigh … it seems that if Marvel wants to launch a new title, all they have to do is add the words “All-New” to the front and hey presto! New title.

I’m still not taken with the Falcon playing the new Captain. I know Steve Rogers has lost the super-serum, and I know they can’t have him live indefinitely. The Second World War wasn’t just 40 years ago from when I was a kid, now it’s 75. As time gets further away from World War II, it’s more difficult to reconcile our notion of the hero that came out of that conflict. The Falcon is an answer to that. Still, it’s hard for me to let go. I know, I know … I’m only a few years away from yelling at kids to get off my lawn.

Still, this wasn’t bad, as much as I hate to admit it. Captain America is still fighting HYDRA and being the son of a preacher, Sam Wilson is still a noble character to fill the shoes. Give it a read and see what you think. 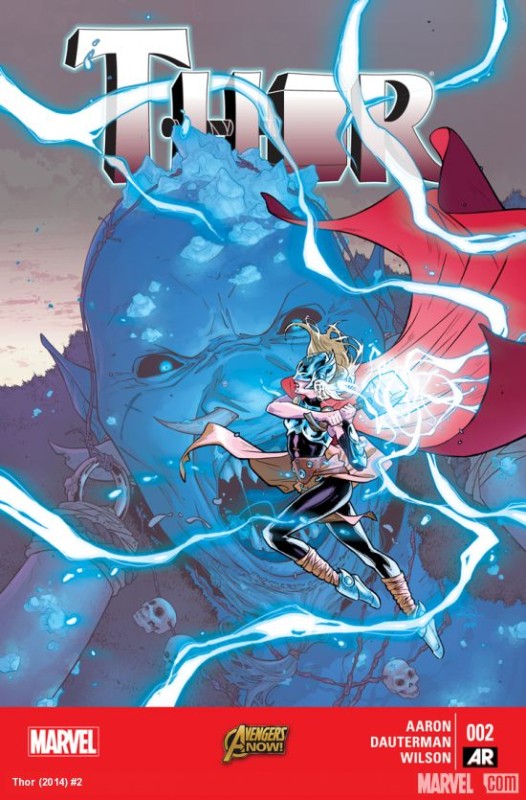 When last we left Asgard, we were still unaware of who this new female Thor’s identity was.

Bait and switch. It seems we will have to wait until the next issue. Basically an action issue, giving the new Thorina, Thorita , whatever , a chance to flex her muscles and beat up some frost giants. A pity … I think I’m done with this. Not very much was revealed other than the new Thor is as surprised as the rest of us that Mjolnir (which apparently is somewhat near-sentient) chose her for the role.

You know what? Save yourself $4.00 and wait for the big reveal announcement. I like my Thors bearded. Just sayin’. 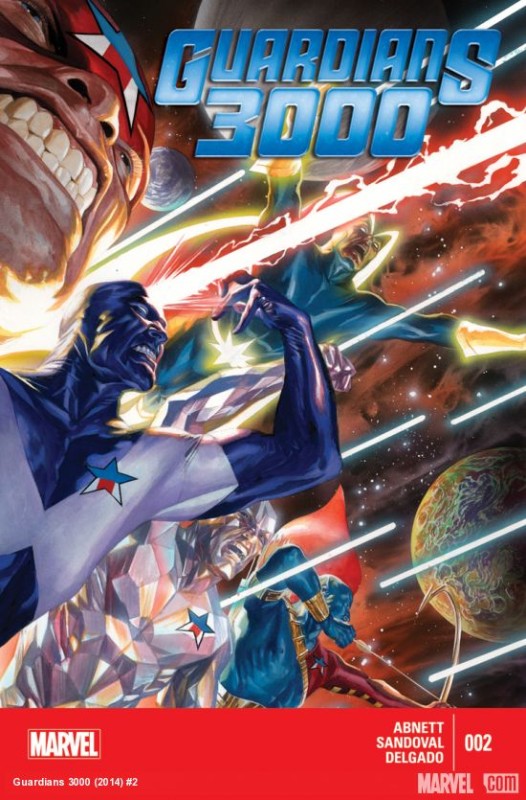 I hate the art. Large, gaping mouths are NOT a common expression. Yet Gerardo Sadoval seems to delight in gifting his characters with them. If it wasn’t for the different costumes, we’d never be able to tell the faces apart.

Still, this wasn’t a bad romp. If you remember that these Guardians are the original Guardians and Marvel is just bringing them into common continuity by placing them in the year 3014, where they can’t do any harm to it, then you’re on your way to understanding this book. 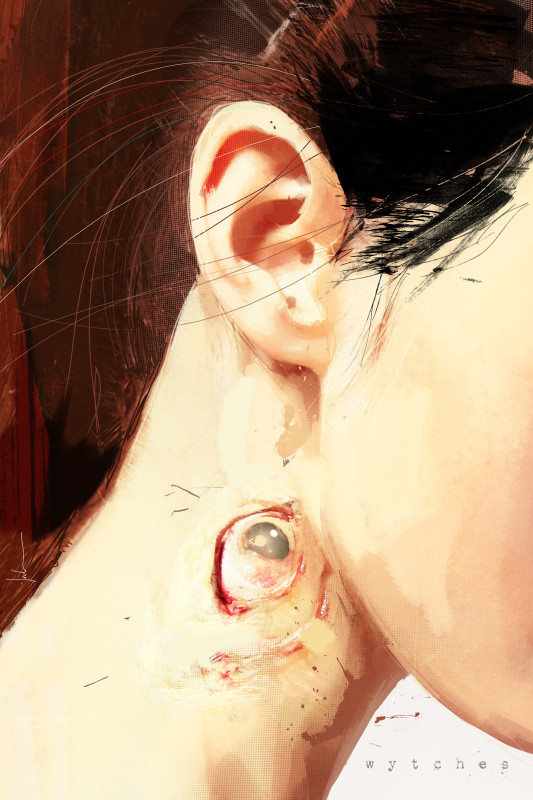 Okay … this one I’ve been waiting for all month! Reading #1 was a heck of a lot of fun. It also allowed me to discuss the nature of horror with my students but looking at how comics are able to use suspense so well. Just one simple panel without any text and a couple of changing frames can convey a short, but effective suspenseful idea with remarkable efficiency.

And that would be Scott Snyder. In the first page of this book, we see three wordless panels of the same tree. We get closer and closer to it and by the time we get to the fourth panel we see a mouth emerge in the trunk of the tree, uttering a pathetic cry for help.

This is a book that makes you shudder out of sheer fear, followed by pure happiness in reading a comic that can make you experience that rush in four simple panels.

Weird stuff … definitely cool, but weird stuff to read. Image certainly has its talent detectors on the right frequencies. This is stuff that far outstrips anything Marvel has got going on , for sure. I wish Image would come up with a shared universe for its creations though. It would be fun to do cross-overs and team-ups. Still, creator-owned stuff is the way they’re going – and quite successfully – but it’s all independents. 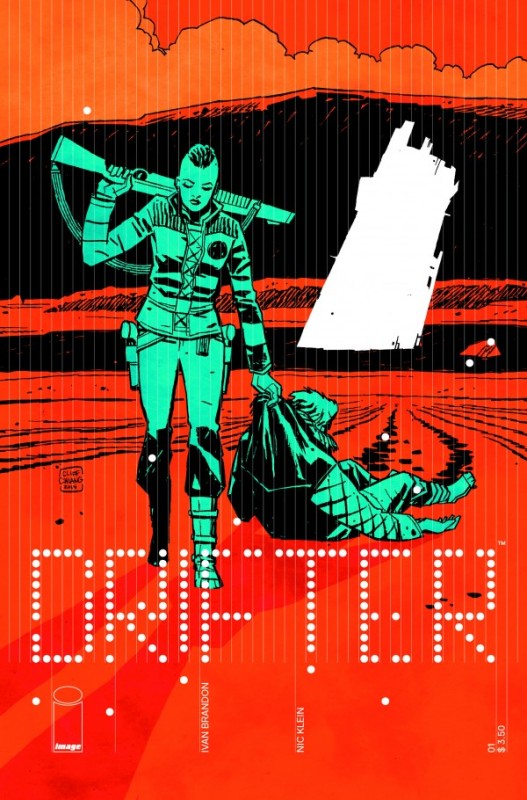 Speaking of which, this new offering from the Image stables has a BSG feel to it; a Spaghetti-Western feel to it, but definitely a BSG vibe in there. Lots of mystery and lots of intriguing characters. I love mystery towns and the one in this comic looks like something I could really sink my teeth into. There’s a lot of promise in this book. I’d advise you to keep an eye out on it. The next Saga, perhaps?

Well done to writer, Ivan Brandon and artist, Nic Klein. Two definite talents that you also want to keep an eye on in the future. These guys are great. 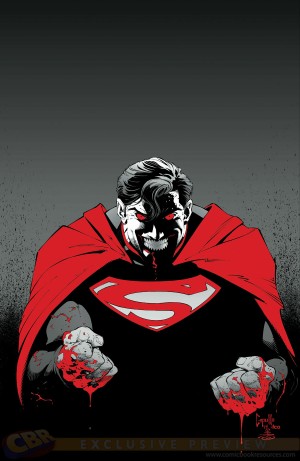 Awesome stand-off between Superman and Batman to start off. Amazing reveal from an old friend. Just a great book – but is it any wonder? Just another great Snyder book. 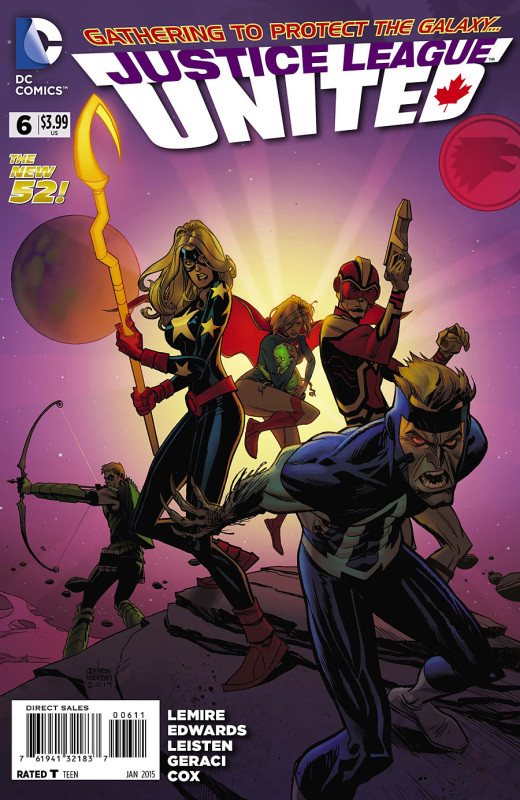 Definitely starting to take shape. A very busy issue, but the emergence of the Legion of Super Heroes last issue definitely gave us a fun battle this issue. I think the JLU would do better staying closer to home in Canada though. We need another Alpha Flight for this generation.

So that’s it for this list. The pick of the pulls for this week goes to:

IDW’s Star Trek: The City on the Edge of Forever

Harlan Ellison recently suffered a stroke. He’s recovering, I’m pleased to recount, but this book is proof of Star Trek’s timeless nature and how it can continue to survive and succeed. Even this mini-series, using the original teleplay of one of the greatest Star Trek episodes ever, can continue to delight new AND old audiences alike. It’s also testament to Ellison’s writing in that it also continues to entertain an audience in a new century.

It was a foregone conclusion from the beginning of this post that this comic was the choice, hands down. In fact, this also makes an excellent teaching tool in looking at the elements that make a timeless and enduring story.

And hey … it’s in a comic book. Guess what I’ll be telling the parents about tonight?