I was playing my pull list in my mind as I was running tonight; trying to identify which one would be my top pick for the week. It was a short list. Why? Because there weren’t a lot of indies on my list this week. Not because there aren’t any notable talents to look at, but personally, I’m getting a little overwhelmed by the proliferation of creator-owned books that are flooding the market these days. I mean, I’m all for exploring new talent, but in the comic market, I don’t have time to read every new title that comes my way. That’s a harsh thing to say, because on one hand I want more competition, but on the other hand I’m sad that I can’t handle it all.

A comic-loving friend of mine once said to me that his ideal day would be to shut himself up in a room filled with all the comics that he would want to read and not come out until he’d read them.

I agree whole-heartedly, but the problem with that fantasy is that you would need more than just one day.

Sigh … let’s take a look at the list this week:

Guardians of the Galaxy: Prelude #1

Aquaman and the Others #1

Guardians of the Galaxy: Prelude 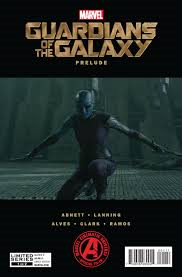 Marvel’s got a bite from the movie bug this week. Guardians of the Galaxy: Prelude #1 is a diversion away from the regular GotG book and ties this into the upcoming film release. In fact, the cover has a new emblem I’ve never seen before: MARVEL CINEMATIC UNIVERSE – OFFICIAL TIE-IN. A new universe – who’d have thunk it? Wait – didn’t they do this before in the 80’s? Oh … right.

We get a taste of the film (which is supposed to give us a taste of the comic, ironically) by giving us character-focused stories of the film interpretations. Not a bad idea, and despite my initial misgivings, not a bad comic. Of course, if you want cosmic writing talent you go to none other than Messrs. Abnett and Lanning, who cut their teeth on the Annihilation series in the early 2000’s. These guys are pure winner, so of course, is this comic. I really found myself intrigued by these new interpretations of Gamora and Nebula. I’m glad I picked this up now – even if it’s just for the fancy new movie label.

Can’t say I was overly impressed by the styled “Marvel’s latest epic”. The idea this comic is based around is Black Bolt’s decision to detonate a Terrigen bomb over New York in order to create more Inhumans and increase his subjects and ensure the Inhumans’ survival as a species.

Unlike the bomb, this comic really didn’t begin with a bang but more of a whimper. Bit of a surprise too, really, given that this comic was supposed to be released in January. Rumours have it that the artist, Joe Madureira, likes to take his time on books and this might explain the delay. Sad to say, the delay has made Attilan’s crash to the surface world old news. I don’t see this comic surviving more than ten or fifteen issues, which is a shame; I’ve always had a soft spot for the Inhumans. 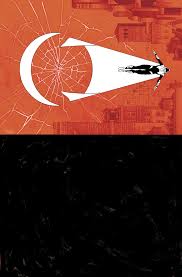 When Moon Knight #1 hit the shelves, I was a really excited grown-up reliving my mid-teen years again. Moon Knight was back! The first issue was a real winner, but this one? Well, let’s just say that Warren Ellis is a guy who knows how to make a statement when he writes characters, which is completely ironic when you read that Moon Knight only utters about twenty words of dialogue in the entire comic.

And three of those are “I’m not real.”

Oh wow. My heart just stopped a bit. Given Marc Spector’s history of insanity, this simple phrase just reinforced in my mind that Ellis is a writer who knows the best aspect of his characters to present. Moon Knight’s most memorable moments were when Spector demonstrated how out of touch with reality he was. This one was pure and simple comic goodness. 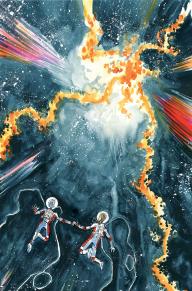 Jeff Lemire generally does quirky well. His other work is award-winning and professionally recognized. Trillium though, didn’t really do it for me. It promised a lot in the beginning and the whole idea of reading the comics upside down and back to front was certainly disorienting, and supposed to make us feel what the characters feel in this out-of-place/out-of-time series. Based in two different time periods and connected through a quasi-mystical alien intelligence, I found that the last issue ended fairly quickly. I wanted more than the abrupt ending I read in this last issue, especially with such believable and compelling characters.

I’m really sad to say I was disappointed with this one. But, maybe I need to go back and read it again from the beginning. Like I said, Lemire generally does this sort of thing very well, so I had high expectations. Maybe too high, this time. 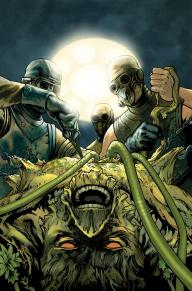 I was initially intrigued by the 52 reboot of the Swamp Thing. Alec Holland is still a mystical avatar of the green, as originally introduced to us by Alan Moore in the 80’s, but this avatar seems to have no limitations on his powers except for what he does not know. That’s the angle they’re playing with – that Alec Holland is still human in his perceptions of “the Green” and this prevents him from realizing his true potential.

There isn’t a lot of mileage in this type of story and it gets over-used. The repetition of cyclic structure of Holland discovering some aspect of himself and realizing his power, only to have his plans thwarted by his own ignorance is boring me.

Which is what is happening in Issue #30. Frankly, I can’t see myself staying with this title for too long.

Aquaman and the Others #1 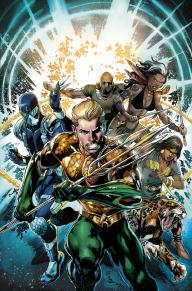 Perverse curiousity made me want to pick up this book. I’ve been collecting Aquaman along with the other rebooted DC titles, and I haven’t been disappointed until of late. So the question begs to be answered: why do we need two Aquaman books when the first one is starting to drop readers?

The Others are a group of misfits with Atlantean technology and were somehow a super-team associated with Aquaman in his new 52 back story. They were never properly described except for a couple of times in a few reunion issues where two of their number were killed, almost frivolously, by weapons smugglers who were searching for Atlantean technology.

That’s the launch pad for this story, unimaginative as it may seem, it is arguably a logical point for the comic to begin. What I can’t see is how they are going to solve the continuity issues I described in my last article and reconcile the two books with Aquaman’s JLA activities. As for the story itself – meh. Rather lackluster and fairly formulaic. I give it ten issues and we’ll see what the sales look like.

The Pick of the Pull

So the pick of the pull for this week is: Moon Knight. What a fantastic follow-up to the first issue, incredibly minimalist in execution but true Marc Spector in every presentation of the character. Moon Knight fights crime, not because he has a magic ring, or to avenge his parents, but because he is compelled to. Just a fantastic story and a real blast from the nostalgic past – this is the comic that the next generation of comic readers should be shown.

Until next time – keep your lists updated and remember to support your local comic book shop!