Captain Kirk’s Pick of the Pulls: East of West #11 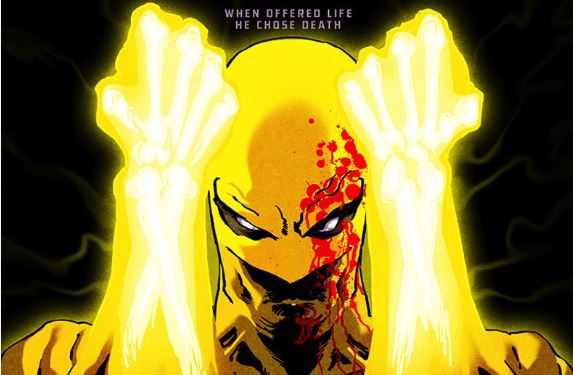 Here’s on deck for tonight’s package of pernicious picks. It’s an eclectic mix, and Marvel has the top-heavy selection for my pulls this week. But does quantity also bring quality to bear? Sometimes, but I think the thing to watch for is the series of loose threads that seem to unravel the fabric of a consistent publishing effort. Given that Captain America: The Winter Soldier has seen some serious success at the box office, why weren’t there more titles that could tie into the Marvel Cinematic Universe? Guardians of the Galaxy: Prelude last month was the only title with that moniker that caught my attention – and that’s for a movie that hasn’t hit the screen yet.

See … that’s my general complaint about the big comic publishers – there isn’t an attempt to create a “grand unified theory” in their respective universes. But I’m distracting myself. Let’s get to the picks. 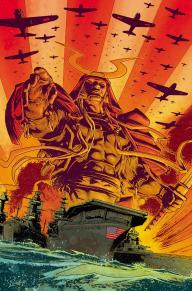 Like Garth Ennis, military history titles never fail to draw me in. But the cherry on top of this World War II sundae is the alternate history angle. The majorly cool premise behind this six-issue series is genetic bloodlines of the royal houses of Europe hold host to super-powers within their individual notaries. In this version of World War II, the royals made an unspoken agreement to keep out of the conflict, until the prince of the House of Windsor could not bear to abrogate his perceived responsibility to his people and wades into the fray. Then, the war takes on a new added dimension of nationalism, social obligations and a level of intensity that only a super-human can bring.

This is a pure winner. It’s got everything that a World War II story should have but adds the element of the reluctant hero. It’s certainly going to continue to be on my list and should be on yours too. There’s one scene where an aircraft carrier … no, I’ve said too much. You’re just going to have to read it. 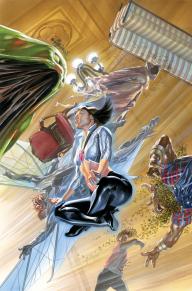 This series is a collection of vignettes set in Kurt Busiek’s Astro City. If you never caught the first incarnation of his works, then you need to pick these up. What I love about them is the human perspective to the duties and challenges of being a super hero and the non-powered mundane humans who help organize their lives, keep them grounded or sometimes save the day. This issue is titled The Sorcerer’s Assistant and it speaks volumes about the under-rated ability of an organized person who can bring order to another’s chaotic lifestyle. Plus, the little pokes at simulacrums of the major heroes in other universes can’t help but delight and the incredible covers by the uber-talented Alex Ross are a huge draw. This series is refreshing and just simply fun to read. 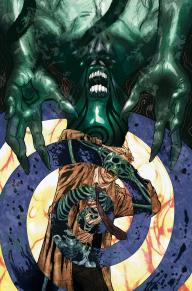 You know, prior to the 52 re-boot, John Constantine was a total dill-hole. He lied, connived, betrayed friends and enemies alike to either satisfy his own rankish purposes or to prevent some extra-dimensional force from obtaining dominion over the prime material plane of existence. And I liked him. He was simple but delightfully entertaining in a twisted way. There was justice or reason behind his machinations, but I have to confess, I have no idea what this 52 John Constantine is about. I’m serious … he occasionally fits into continuity, is a part of the JLA Dark and somehow has his own storyline about being hunted down by a bunch of ruthless brotherhood of sorcerers. I confess that I’ve completely lost track of him. The stories just aren’t memorable or they’re too convoluted that you need to read them from a wider perceptive. I find the art is too busy too. It’s messy and it seems hard-pressed to stay in a dominant style. I’m sorry to see Constantine go, but this one will be my last read. 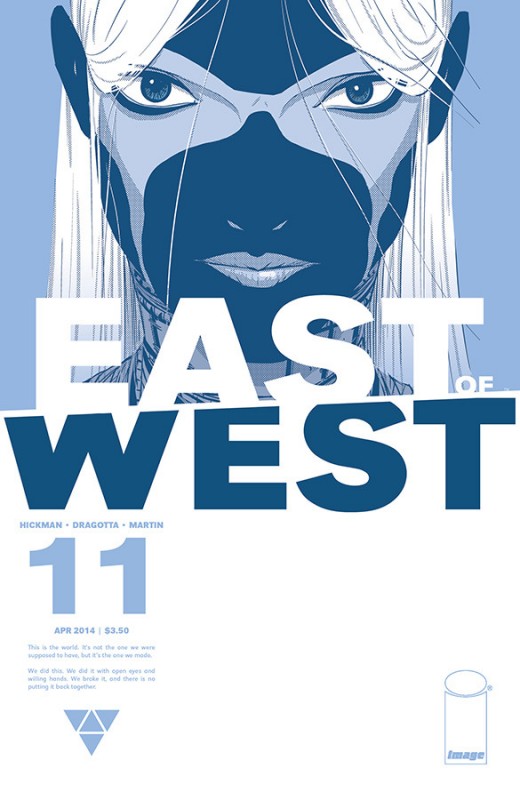 Don’t you just love a good post-apocalyptic fantasy? I sure do, and I love the decaying universe that Jonathan Hickman has built for us. This is so exotic and cerebral that I have to re-read each issue at least two or three times to see if I’ve missed anything. In this comic, Hickman is doing what he does best – universe building. His panoramic visions completely overwhelm us that it’s so very easy to overlook the small, subtle details that could prove to be so important to the fabric of the story. I’m continuing to buy these in individual floppies, but I honestly cannot wait for this to come out in hardcover and to sit back for an afternoon and completely immerse myself in this strange, damaged universe. Just go buy it … you’ll see what I mean. 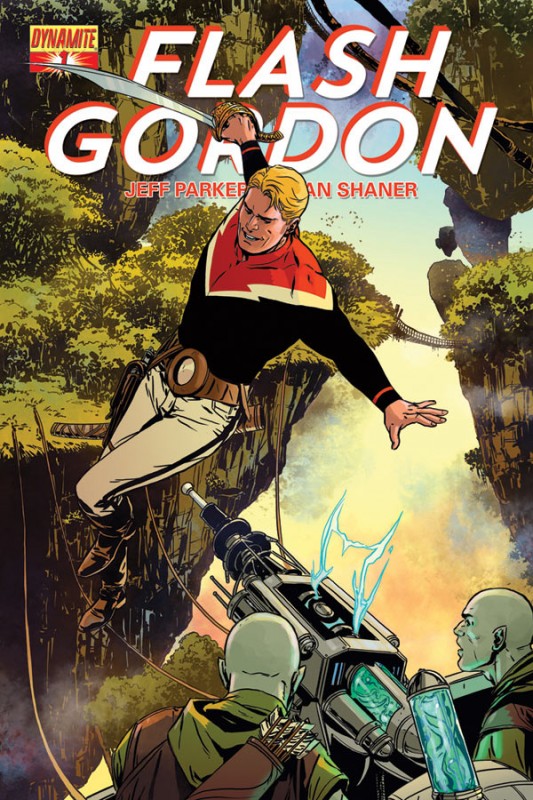 You know … this wasn’t half-bad. To be honest, I was a little wary about resurrecting an old fossil like Flash Gordon, but this worked. Wonderfully written by Jeff Parker and drawn by Evan Shaner, I was quite surprised and pleased to see the re-working of the familiar space-hero. I hope this continues in the same vein. 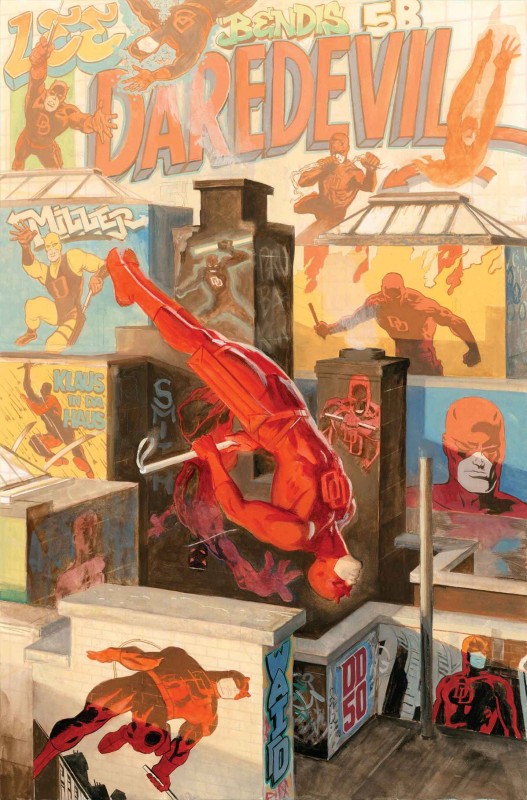 Didn’t have quite the dramatic punch I was expecting, but this had a pair of solidly written “other-universe” stories that I found quite entertaining. It’s funny … but I don’t really have much more to say about this issue. I’ve gained a new appreciation for the man without fear in my latter years that I didn’t have in my youth, but I don’t think anything will ever top Miller and Mazzucchellli. I’ve been spoiled. 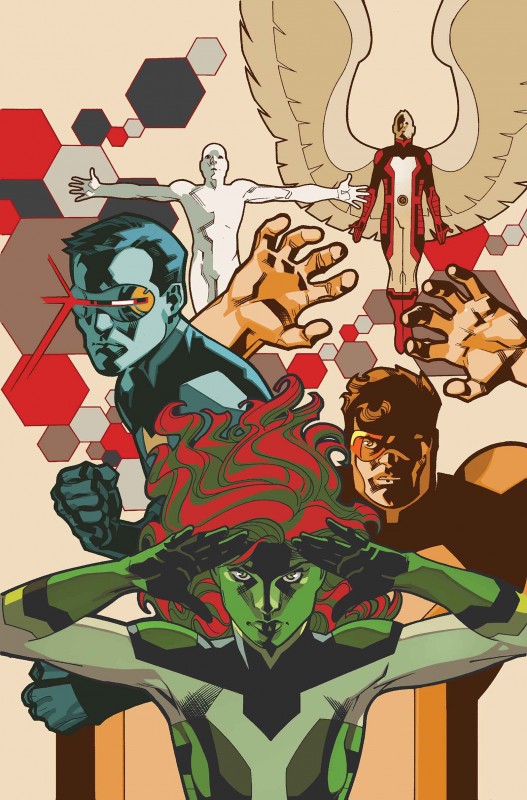 Why? Why did I buy this? Oh yeah … because I’m a mindless X-Men drone that will buy anything as long as it has “X-Men” stencilled on it. I’m serious. Because of the investment in collecting the X-Men in the 1980’s, there’s a part of me that refuses to let the X-Men go by without picking up a copy, regardless of what has been done to my favourite super-team. Despite the hype on the cover, this was a remarkably dull issue. Beast has a bad dream and gets chastised by an unwelcome visitor for all of the screw-ups that have been perpetuated upon the X-Men in the last few years. Well, given that Beast DID cause a lot of them, it’s definitely blame well-placed, but the combination of artists and different mini-scenarios throughout the book was confusing and just down-right silly.

It’s hypocritical for me to say so, but let this one pass. Unless you’re like me, who just has to have it for the continuity of his collection then go get it … and may the comic gods have mercy on your soul. 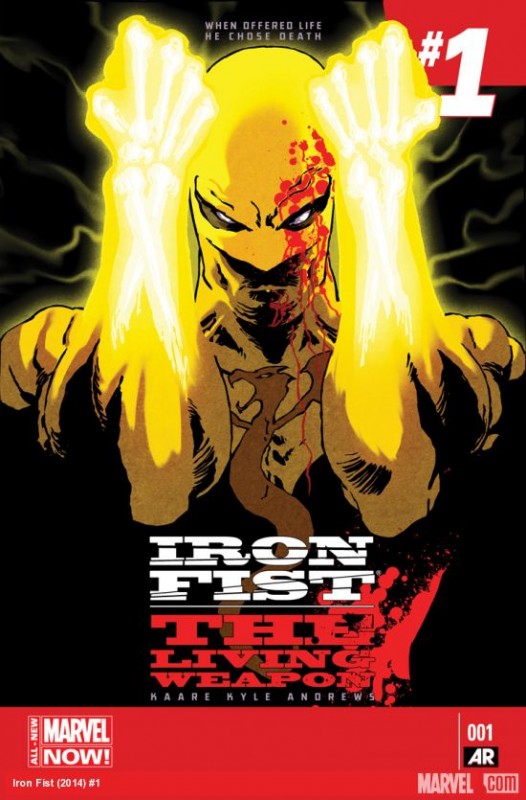 Written and drawn by Kaare Andrews, this rendition of Iron Fist is a little darker than I was expecting but spotted with inappropriate moments of levity. In one scene, Daniel Rand is internalizing about the “full charge of unbridled power” and next moment he voices his disappointment in its failure with an odd and unfitting “crappity-crap”. I think it has some potential and full kudos must be given to Kaare Andrews who is taking on double-duty of drawing and writing, but it didn’t completely wow me. Again, after reading Matt Fraction’s The Immortal Iron Fist, the question begs to be asked – have I been spoiled? 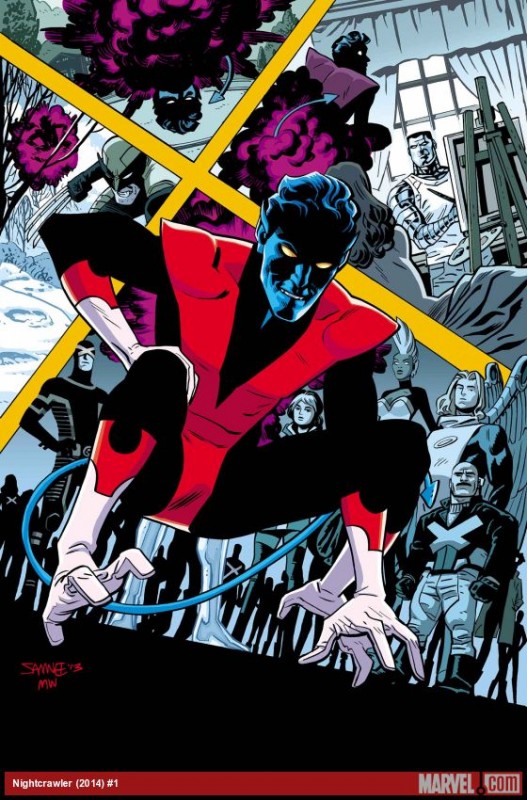 It might be too early to say for sure, but I actually didn’t mind this issue. Maybe I’m just used to Claremont’s writing style, but it was a solid story with clear character motives, strong plot and enough of a realistic threat to keep me curious to read the next issue. It was classic, old-school X-Men … forced to deal with the new state the X-Men are in now. I think Claremont pulled it off. There’s also the added thrill of seeing classic Nightcrawler back again in all his Bamfy attitude. It was like Claremont pulled Kurt Wagner back out of the 80’s and that’s very hard for me to resist liking. So, well done, Mr. Claremont. Let’s see what the next issue looks like.

So, the pull of the picks for this week is …

A close contender was Astro City … a very close call, I have to admit; but in terms of scope, the edge has to go to Mr. Hickman and Mr. Dragotta for their ability to synthesize this shattered world out of the scraps of the one it previously used to be. It’s an awesome series that deserves serious respect, and that cover is just simply stunning. Anyway, go buy it and until next time, don’t forget to show some respect and support to your local comic shop!