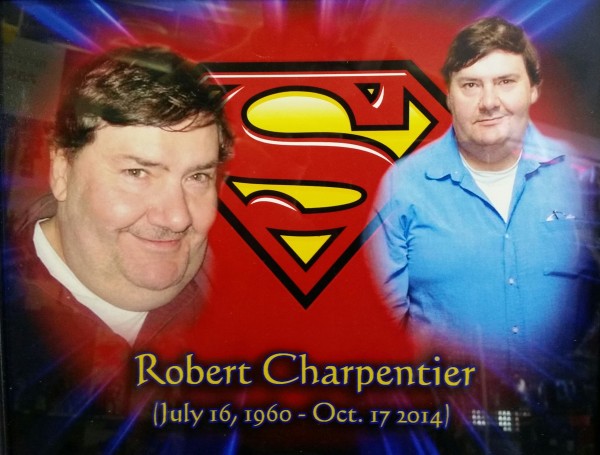 It’s a sad day for Toronto comic lovers; one of our own has passed. Rob Charpentier, owner and manager of Comics and More lost his valiant struggle with cancer and stepped through the veil on Oct. 17th.

Sounds like a dubious sort of relationship to miss, doesn’t it? I mean, he owned a hole-in-the-wall comic store and someone that Rob knew very well even had the audacity to suggest that he wouldn’t be missed – it’s not like he did anything, right?

In his own quiet and saturnine way, Rob was a constant presence on Danforth Avenue. Hunched over his counter, usually poring over his laptop, he was predictable and reliable. He knew what to recommend to new readers and he was always willing to share with a mother or grandmother what their kid should be reading, He didn’t disappoint customers.

Rob only had the one store. He was incensed by other stores’ price-gouging practises and frequently complained – to those he shared his mind with – about the lack of honesty or holding back stock to drive up demand. Rob certainly didn’t do any of those things.

Rob was a grim sort, to be honest. He didn’t greet people with a happy, welcoming smile. He reserved his customer service face for those who truly loved comics and for those who deserved them. Rob may have provided countless issues of various comics for customers but it was the people who truly loved them that he shared his opinions with. He was a supporter to many local school libraries, providing deep discounts for exhausted library budgets and even sponsoring my school’s Heroclix club with free figures and prizes. Rob didn’t hold back when it came to making his products available to people he knew would appreciate them.

When my kid was sick, he didn’t hold back on kindness for her. His little gifts of comics and toys made her happy during the tough times of her own battle with cancer.

He didn’t express any friendship… and neither did I. But I was there, every week to buy my stuff from him and he was always there with an opinion about my last article or a recent development in the comic world. For that, I was deeply appreciative.

Maybe Rob didn’t do much, but he meant much. How much, I don’t think people really know.

Rob… this is for you. Thanks for all the pages. May you read forever in peace. 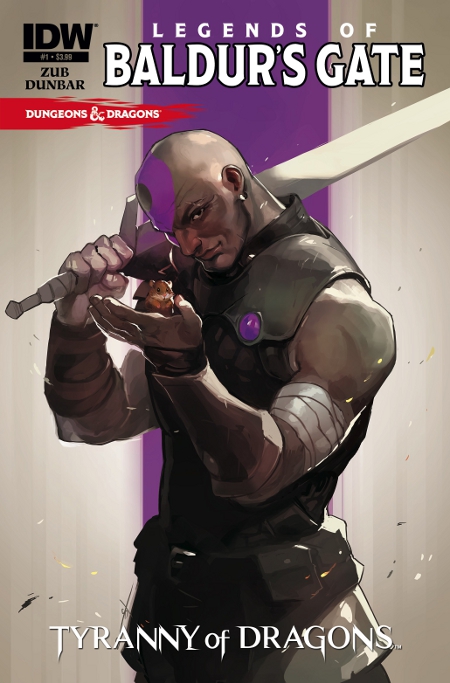 This book started fairly typically: a generic D&D character rushes on to the page and gets into some sort of trouble for a few panels. However, the next few pages really accelerate this book into the funsophere.

Remember Baldur’s Gate? Probably the best D&D computer role-playing game – ever. If memory serves, I think it was released in 2002. It was so big that it had to be stored on five or six different CD-ROMs. It came in a massive envelope and every time a new adventure started, you had to take the disks out of the envelope and insert them. It was actually the first computer game that competed with my wife for my attention. She deeply hated it.

Of course, I loved every minute of it. But it was the NPCs that you ran into who formed your adventuring party that made this game fun – and one of those characters was the Ranger Minsc, accompanied by his dreaded hamster, Boo. Remember them?

As soon as I discovered Minsc and Boo were in this book, it hooked me. This is a book that capitalizes on the fun of the game. Jim Zub does a great job of bringing these characters back to the forefront. With battle cries like “GO FOR THE EYES!” there is a real nostalgiac sense of recapturing what was fun about this game in this comic. It’s definitely a fun read and worth buying from your LCS. 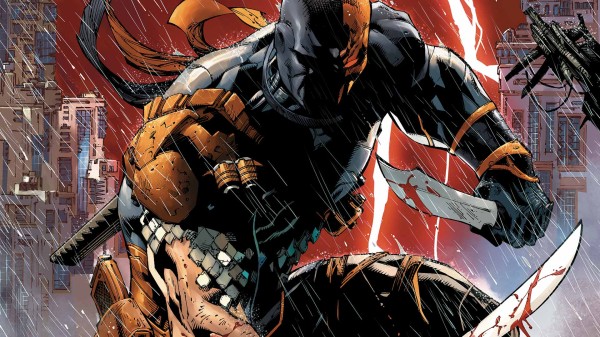 I’ve never been much of a Deathstroke fan… in fact I remember the Teen Titan days when he went by the appellation Deathstroke the Terminator, but that was pre-New 52 and even back in the 80s it didn’t work so well with the proximity to the Schwarzenegger films. However, “The Judas Contract” is still one of my most favourite story arcs of all time. I think Tony Daniel remembered it as well and started off this new version of him with the same moniker and in the same spirit of the Deathstroke that I remember.

Have to say though, I wasn’t disappointed. I liked Deathstroke as a mastermind, but recent versions of him have been quite content to portray him as the mercenary fighter who uses over 90% of his enhanced brain capacity. He’s like a more serious Deadpool.

Daniel has done a great job in portraying him in a new way… still a mercenary making his living off the corpses of others, but he’s a mercenary with a new mysterious past and one that bears examination. Give it a go and see what I mean.

The Multiversity: The Just #1 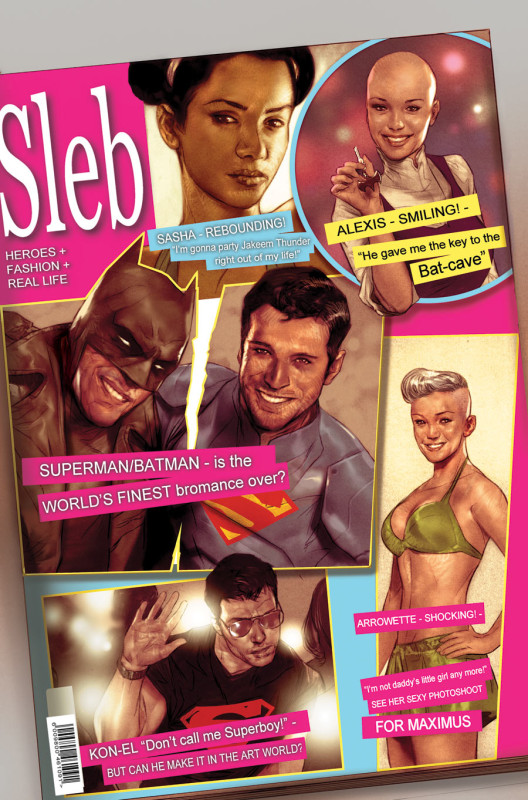 I just feel like I read the National Enquirer’s version of another superhero universe.

Which, of course, is the entire aim of this comic. In this reality, the remaining superheroes or descendants of the greatest ones are simply bored. The father of this reality’s Superman has constructed a giant army of Superman Robots reducing all heroes to obsolescence, so all the remaining heroes are resigned to creating mock-villain battles or endless clubbing nights.

It’s a real stretch of the imagination for this one. I can’t say I enjoyed it and I can’t see anyone being entertained by the story premise. It’s a comic in the same spirit as some the brainless reality TV shows that are out there today. Stories of entitled and spoiled youth are not what I want from my entertainment fiction. I mean, I’m a teacher. 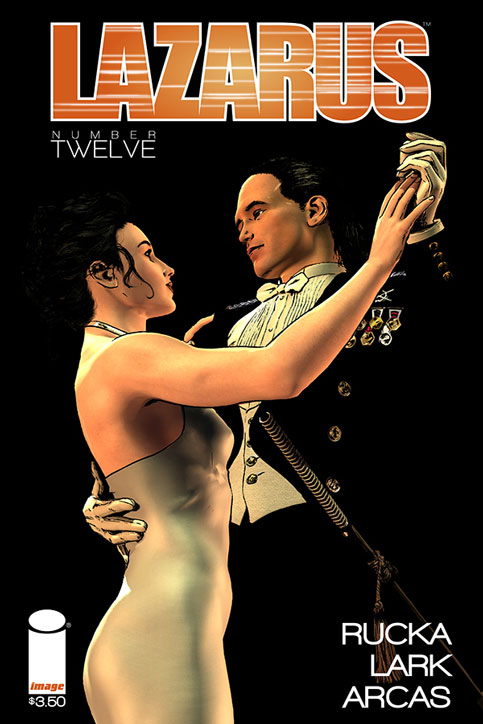 There’s never enough of this book. In fact, I’d like to personally request that Image double the size of the book. Make it 50 pages … I know this will put more stress on Messrs. Lark and Rucka but, I say their discomfort would be well worth it. Seriously one of the top five best comics out there right now. It is thoroughly enjoyable but you know that they’ve only uncovered the tip of the iceberg. It is an entirely new world that just begs to be revealed, yet it is only done so 22 pages at a time.

In this issue, we see the heads of the different families come together for a social gala … but like all stories of political intrigue, this is simply a metaphor for what Chancellor Bismarck termed realpolitik. The scary thing about this book is that it is entirely a foreseeable dystopia. However, in the midst of all this grand strategizing, we see the counter-point of Forever Carlyle, the Lazarus and military commander of the Carlyle Family forces, uncomfortable in an evening gown. An incredibly well-crafted contrast truly fitting of a thoroughly amazing story. 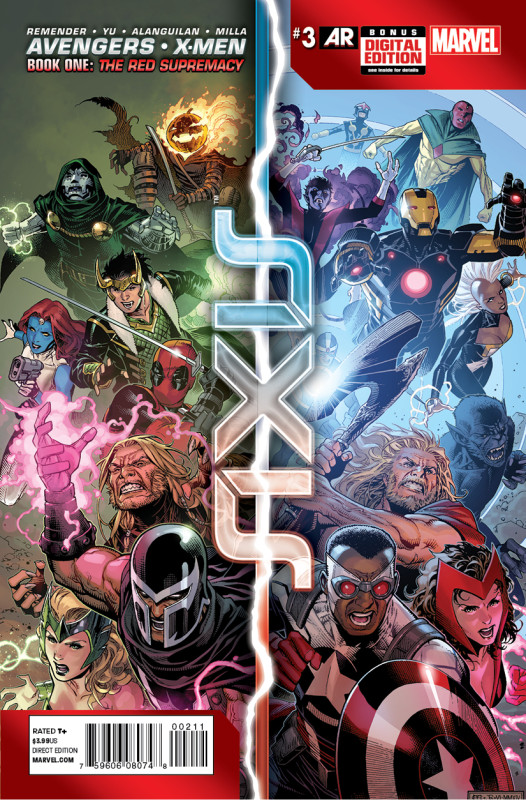 I did enjoy this issue. Like I said last week, Axis is pretty much just an excuse for a major battle between heroes and villains. In this issue, we see former villains and present villains acting as heroes and coming to the rescue of the heroes.

Sigh … it’s as imaginative as I make it seem.

Aside from some witty banter, it’s passable. If it weren’t for the hint of the possible return of a certain mentor mutant leader somewhere in the thick of the story, I really wouldn’t pay attention to it. Still, Deadpool actually manages some decent one-liners, which is odd, given that I’ve grown tired of his banter. However, I have to give full credit to Lenil Yu’s art – the man is a gifted talent.

So the pick of the pulls for this week goes to:

Have I ever NOT given this comic my recognition? I’m actually trying to remember if I there has been a time when this comic lost to the competition and I don’t think there ever has been such an occasion. It’s just such a high-quality read … there simply isn’t anything that can compare to the vastness of the world-building that has gone into the creation of this book. The political system, the military dimensions and even the social infrastructure – I just don’t think there is anything quite like this book in terms of scale, scope and detail. This is the fun of writing for me – I love to think and create worlds – backgrounds for stories, but Greg Rucka actually brings these worlds to life. It is an enviable gift and I am truly humbled. It’s all I can do to simply be a grateful observer and enjoy his vision brought into focus by Michael Lark. Amazing work, gentlemen – I am truly grateful.

That’s it for another week. It’s been a good week of comics, but as I said in the beginning, a sad one for Toronto comic lovers.

Read in peace, Rob Charpentier. Thanks for bringing these stories to our community; your work was appreciated.