Captain Kirk’s Pick of the Week: Tales of Honor #4

It’s an Image-exclusive read today! My apologies for the lack of variety in publishing houses, but I have to give Image Comics credit – they’re knocking them out of the park these days. Why? Good question … maybe Robert Kirkman could shed some light on that for me. In fact, to be honest, I’d love a sit-down with the guy and just find out from the source the answer to the question: just what makes a good comic?

Well, whatever that answer would be, it’s clearly working out for his company. Today I’m looking at these two titles: 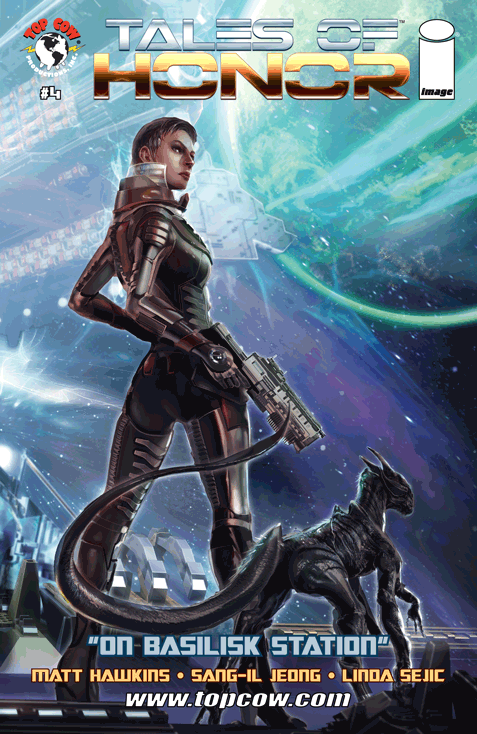 Aside from the atypical spelling of ‘Honour’ (Hey – I’m Canadian raised), this comic is absolutely entertaining. An adaptation of David Weber’s Honor Harrington series, it’s a must for any military/naval/sci-fi enthusiast to read. The comparisons to the British Navy are plainly apparent as is the naval hero formula. Weber has a C.S. Forester’s Horatio Hornblower/Patrick O’Brien’s Jack Aubrey vibe going on here, with the exception that the hero of his stories is an accomplished female officer in the Royal Manticoran Navy.

I’m a Weber fan … have been, ever since my university days. Why it’s taken this long for someone to see the merit of these stories brought to new vision in a comic book, but thank God someone finally clued in. Weber’s fascination with militaria and its applications to sci-fi captured my interest so when Image (partnered with Top Cow) released Tales of Honor, a few months back, it just blew my mind. I included Tales of Honor #1  in an earlier post.

So here we are again: the one thing that amazes me about this comic is the pace. The problem with reading a 22 page book is that the whole story can’t be contained … and there has to be some cliffhanger. But when every issue is a cliffhanger, it gets a bit tiring. Tales of Honor has found that right measure of giving you a full story that leaves you satisfied while also panting for the next issue. Kudos to Matt Hawkins for a wonderful adaptation and such satiating story development.

This is the fourth issue that covers the first novel, On Basilisk Station. The lead-in is a little out of order with Honor as prisoner of the People’s Republic of Haven, recounting her first encounter with the Havenites. Still, it’s very workable and by the fourth issue, the arc of the story is rising to a climax. It’s wonderful reading and if you’ve never picked up any of David Weber’s stuff, this is a pretty good introduction. 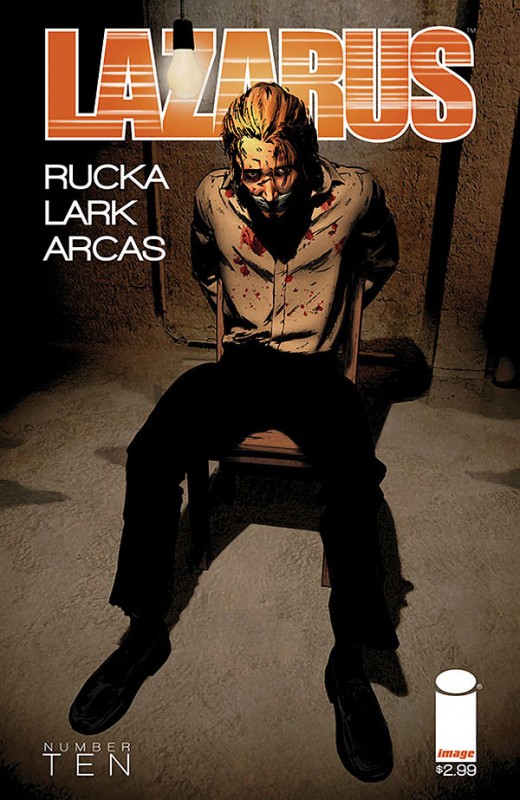 Wow … Greg Rucka has woven an amazing vision of the future. The Carlyle Family saga continues with the flight of one of its family members to what he hopes is sanctuary. This is an incredible story with such realistically grim portending … the concentration of wealth in this new North America in a few dynastic families.

My only problem with this comic is that you only get tastes. It’s a fantastic story, don’t get me wrong, but there isn’t enough of it in one issue. For example, most of the story has been contained in the Southwest of the United States, but by issue 10 we are only just getting introduced to the area, east of the Mississippi.

We’ve also only seen representatives of the three of the controlling Families. The world that Rucka has created is obviously huge, but the last few issues were devoted to a story about some of the serfs in the service of the Carlyle Family with some marginal involvement of Forever Carlyle. What we really want to see is more about Forever … or the Lazaruses of the other families. Rucka has written an immense world into creation but we are only able to see glimpses of it.

While this is incredibly frustrating to the reader, I can only imagine how Rucka must feel. There’s this great big world and he can only let people play in it for a few pages. Still, it’s something that can’t be missed. No matter how small the opportunity, you have to take it.

The pick of the pulls for this week is:

Seriously one of the best novel-to-comic adaptations I have read in a long time. The artwork is simply stunning and truly captures Weber’s descriptions of Honor and her treecat, Nimitz. I love space opera and I haven’t read a decent military sci-fi comic in ages. This one is definitely worth picking up … and it’s certainly my honour to recommend it.