Captain Kirk’s Pick of the Week: The Mercenary Sea #6

It’s a pretty small list for Pick of the Pulls this week. I could claim the regular list of things that clog up our everyday lives as interference, but the truth of the matter is: my comic store guy is in the hospital.

Yeah … we all have our pushers and Rob at Comics and More (Greenwood and Danforth here in Toronto) is mine and he isn’t doing too well. Rather than get into the details of what’s wrong with him, I’d just like to put out that this is a guy who keeps my comic orders in line, gives me a break on the multitude of issues I purchase and alerts me to whenever something significant is coming down the pipe.

You can’t get that with a digital service.

He does this all by himself too. It’s not like he’s making a fortune – his is a one-guy operation with occasional help and as soon as he goes missing, the operation grinds to a halt. Luckily he has a few folks who he can call to get the store running, but he’s the heart of the operation.

Unfortunately, this is true with most brick and mortar stores. A good number of comic publishers see them as a growing liability. It’s more expensive to ship instead of downloading. A lot of the time, comic shop owners advocate on behalf of their customers. With a download key – there’s really no or little recourse. But with high overhead and low profit, the traditional comic shop is phasing out.

Sure, there are human errors and mistakes, but with a real live person behind the counter you get the opportunity for personal interaction; opinion about what makes a good comic instead of just reducing it down to a subscription numbers game. I like the efficiency of a digital comic, but it’s got no soul and no way to show a creator at a convention that you care about her work so much that you dragged it down town in a protective casing to get her to deface it.

I count myself lucky to be within a few minutes of a drive to neighbourhood comic shop. I enjoy the conversation, the recommendations and the knowledge that I can always get an informed response or opinion on something that’s bugging me in the comic world.

Print still matters. People like Rob still matter, so Rob, this one’s for you. Get better soon.

An interesting development in what has to be one of the weirdest cross-publishing events Marvel has dreamed up. I’m also pleased as punch to see the original Nick Fury back in the saddle again as a central character, but I can’t help but feel that this is the Marvel Cinematic Universe’s way of ushering old Nick back to the happy hunting grounds. However, it does beg the question just how the heck do they plan on accomplishing that? Ah, speculation, speculation.

Still, the death of the Watcher upsets me. It’s one of those 1960’s lynchpins that held the Marvel universe together. With Uatu gone, there’s a sense of a noticeable void in the old 616. However, in this issue, at least they upped the plot development a little. Fury has a vague purpose that’s indefinably unsettling. Too much sizzle and not a lot of steak for this event, I’m sorry to say.

In fact, there’s not a lot of connection between the main series and all the other tie-ins. I have to say, there seems to be no real common denominator among all the comics – as we’ll see when I discuss Uncanny X-Men #23. But if there is a real failing to this event is that the plot is completely puzzling and there is no real sense of mystery behind it to generate our interest in it. The hints and foreshadowing we do get are just too vague to give us a definitive sense of where this story is going.

If there are more clues in the tie-ins, then they’re way too spread out for anyone save the most extreme collector to read them all and give us an idea of what is going on. If there’s anyone out there like that who has given this a try, let me know, would you? I’m honestly frustrated and I hate feeling that way about a comic.

Well, the cover indicates that this issue is about the last will and testament of Charles Xavier.

Because that would indicate that he’s dead, right?

While we do get a bit of a focus on Dazzler; a re-joining of a previously dismissed member (Hijack) of Scott Summers’ rag-tag bunch of trainees, and oh, She-Hulk shows up to say that she has Xavier’s will, absolutely nothing else happens in this comic.

Bendis wrote another filler issue. I’d say that the only two significant matters of interest in this issue are the fact that there’s a will, and the question about Xavier about really being dead came up. When is Bendis going to quit screwing around this group of characters and re-united them in one single, non-confusing comic title? Please?

I wanted to know what was in the will. Save yourself the effort – rely upon my summary above and buy the next one. That is, if you are truly curious about what’s in the will.

I’m starting to really get into this series. It had a bit of a slow burn in the beginning, but I have to say the story direction is intriguing and it features enough of a cast variety to keep me interested without dividing my attention too much.

Based on my prior New 52 knowledge, I’m really intrigued to see how DC re-invents the OMACs and the Brother Eye saga. Obviously, Batman isn’t to blame for this … or is he? I’m finding myself pleasantly entertained by this story, and can’t wait to read it in its entirety when it eventually becomes a hardcover collection. It’s worth reading.

As much as I’ve enjoyed most of the previous issues – and to be fair, there really isn’t anything too wrong with this one – I’m seeing this as less a Batman story and more of another kick at the Batman, Incorporated model.

(Sure … it only took me fifteen issues to catch on to that.)

I hate Batman, Incorporated. It was a terrible idea to sustain. It may have had its kitsch-like quality, but it just wasn’t a premise that had a lot of endurance. Still, every issue, there’s another member of the Batman extended family lending a hand here and there.

However, there was an occult element to this story that had a different flavour than the prior issues to date. I quite liked the inclusion of the Spectre and can’t wait to see him in action. I’m waiting for the incident that cries out for justice to release the Spectre into the mix. It promises to be a lot of fun. 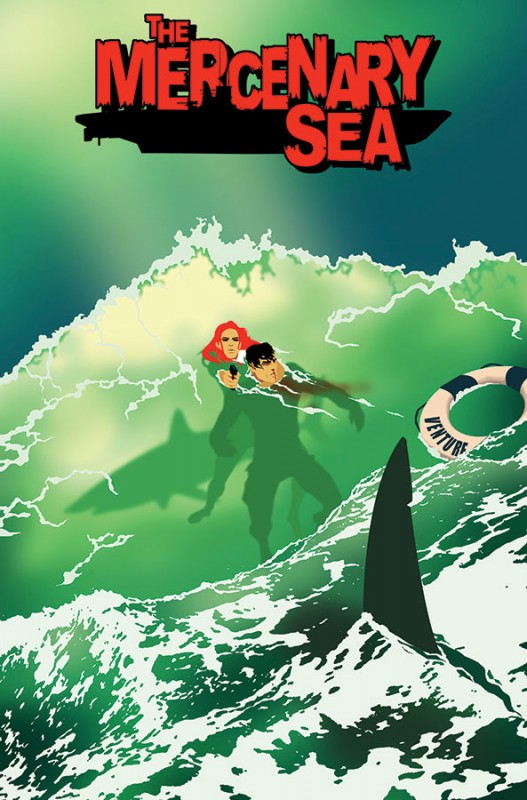 I love this comic.

There’s humour, swashbuckling adventure and a 20th century film-type romance quality to this book that is nostalgically appealing to a war-story aficionado like myself. But the fact that there aren’t a lot of stories out there set in this time period makes this book really unique. It’s a change for the typical present generation of comic readers today but the setting is also appealing to older readers like myself. It’s got all the right elements for success in it.

Now that the arc has wrapped up in this issue – a bit too conveniently, I think, though it does provide us with an opportunity for some delicious complications down the road – I can’t wait to see what the crew of The Venture get up to next.

I held off on this one last month because I wanted to see a larger segment of the story. This one came right out of left field for me. I had a different set of expectations.

The idea is that there is a group of different immortal beings from all sorts of diverse pantheons. Every so often they end their existence temporarily and then reconvene together at regular intervals. For what? That hasn’t been made clear yet, but this is obviously tying into some sort of examination between the relationship of gods and humanity. Are they here to inspire or demand our worship?

The idea of the god as a pop-culture figure has been done before but writer, Kieron Gillen, obviously feels that the he can re-use the concept in some new way that we haven’t thought of yet. For one, I’m willing to give him a try.

I found the characters to be incredibly compelling. I’m definitely drawn to them out of a genuine sense of curiousity. I’m always intrigued by the notion of gods walking among men and how would they fit into the current framework of our civilization. Did Lucifer kill the … oh, wait. That would be a spoiler, wouldn’t it? Well, it’s got me thinking, that’s for sure.

Other than that, I honestly don’t know why I’m drawn to it, but like the lead character, Laura is drawn to the immortals, I’m probably just mesmerized by them too.

Well, with that said, the pick of the pulls for this week is:

Ah … I had to. After all, it’s been my pick for several occasions, and this issue wraps up a story arc. There’s something comforting in that and in the knowledge that Captain Harper and his renegades will be back in the mix with another daring adventure. Well done to the team of Kel Symons and Mathew Reynolds: they’ve done it again.

A close competitor was The Wicked and the Divine #1 and #2. I found the story a little bit slow and not as explosive as The Mercenary Sea. When that comic first came out, it came out with an action-packed bang that threatened to blow your fingers off if you didn’t turn its pages!

And that’s it for this week’s installment. Like I said, this one’s for Rob at Comics and More. Here’s hoping he gets better soon because the world needs more comic book stores!