The theme this week? Recognizing what’s good when we see it.

Too often, we see what’s right for us and we pass it up for a variety of reasons that seem to make sense. I’m adopting a different format for this week’s post. Instead of surveying a variety of titles and listing a selection, I’m going with a single title this week because after reading over 120 titles from different publishers, I’m just going to go with the one that lets me justify reading so many comics in the first place.

Let’s talk about The New Mutants #5. 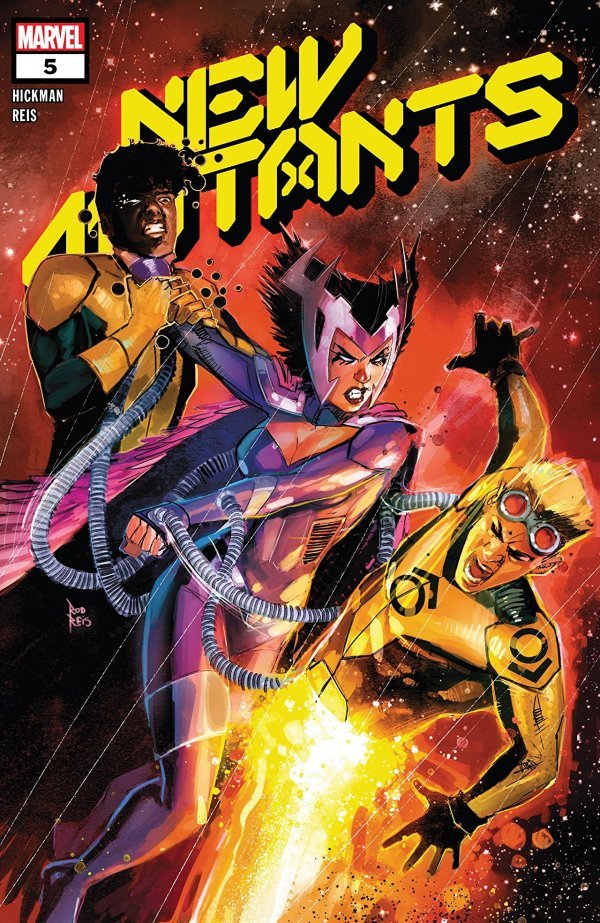 You see, as a reader of comics with about 45 years under my belt, it’s within my generational mentality to be moved by nostalgia. I can’t help it; it’s a function of my age. The New Mutants were my number one favourite comic titles when they were released (temporarily surpassing The X-Men) for a few months because they were released during an integral story moment of The X-Men when readers were genuinely worried about their continuation.

Now, this is important. Readers were genuinely worried about their continuation from a story perspective, as opposed to a publishing perspective. At the time of reading, the audience was actually concerned that the X-Men, considered dead, would not be able to make it back to Earth which spawned Charles Xavier’s guilt and trepidation at finding a new team of mutants who could continue his dream of a fighting force who could bridge the gap between Humanity and Mutant-kind.

But the 80’s were a time when youth voices were starting to be heard and writers like Chris Claremont and artists like Bob McLeod and Bill Sienkiewicz were instrumental in allowing those voices expression. So, the New Mutants was a title that managed to make a decided impact upon a formational generation of readers – like me – who were able to recognize the appeal of this book.

I don’t have to quote statistics on how successful this book was in the eighties; the fact that the efforts of these creators is still felt in the comic world today is testament to how influential their work is felt. In fact, if anyone was to dispute that with me, I feel confident that the majority of comic readers would support me.

With that established, let’s talk about this book.

I have been writing about Jonathan Hickman since I started this column. I’ve been witness to his work as it has appeared in various publishers. What I have always been impressed by is the scope of his vision. You know, if you’ve been a long-time reader of his work, like me, is that he doesn’t care about the individual popularity of issues. In the comic world, as issues come out on a monthly (some times interrupted every six or eight months) basis, so comic writers are sometimes beholden to the appeal of the monthly sales report.

As I’m largely distanced from some of the commercial aspects of comic publishing, I think I’m a bit sheltered from seeing some of the pressures that are placed upon creators. However, as I began my career in publishing (ten years) and have worked in education for the last 17 years, I think I have enough of a balanced understanding of business and literature demands to account for the comic stories that come out on regular basis to account for my nostalgic proclivities.

The New Mutants rule, and let me explain why.

First of all, there’s the voice that Jonathan Hickman has adopted for the central narrative of this issue. Roberto “Bobby” DaCosta (aka “Sunspot”) was originally created as a wealthy scion of a Brazilian magnate who had the limited capacity to absorb solar energy and turn that into super strength. But, he was given limitations. He wasn’t invulnerable and the ability to use his super strength wore out over time. Not only was this an imaginative creation but it was a built-in story device that would account for unforeseen story issues that could manifest down the line. Claremont built this story device into the character that could last for generations.

Sure enough, Hickman has taken advantage of this trait and, in his iteration, had Sunspot blatantly declare (with a significant degree of hubris that matches the original incarnation of the character) to Deathbird (one of the most enticing and under-used characters of the 1980’s X-Men franchise) that he can absorb the energy of any sun.

Of course, this also matches a much-hyped Millennial boastful trait of announcing not only his wealth, his super-power (to absorb alien suns’ energies) but that he is the leader of the group of mutants on board the ship that is to protect her.

The shallow DaCosta responds by stating how refreshing it is that she likes how he looks.

That is the embodiment of the original Roberto DaCosta that I was first introduced to in my formative reading years, but it is now accessible to me – in my 50th year – to appreciate as a Millennial who has now reached a point in his life (though has an abundance of wealth and super-powers) when he audaciously thinks he can approach a member of an alien royal dynasty for a hook-up.

But then there’s his best friend, Sam Guthrie, aka, Cannonball. Initially, Sam was a character who had his family’s best interests at heat and who quit school and went to work in the coal mines of Kentucky after his father died to secure a future for his siblings. Originally, he joined The New Mutants because Charles Xavier’s wealth guaranteed an income for his family and an education for him. Now, Sam is not only an independent, intergalactic success, but he has ensured the survival of his family, has a happy relationship and represents the epitome of the happy, grounded “best friend” a wealthy rake like DaCosta should have.

This is the prefect interpretation of The New Mutants for this generation and Hickman needs to be seriously complimented for the accuracy of his vision in presenting this team for, what I’m going to coin the new age of adult comic reading.

Let’s face it: the people who are going to be accepted for accurate and historical opinions on these characters are the people who have been reading them for the years they’ve been around.

But I don’t want that to discount the artistic work of Rod Reis. While his work may have a bit of exaggerated colourful flair to it, I can’t say that I’m opposed to it. It has a nostalgic 1980’s flavour to it that really resonates with my reading of the development of the characters that Hickman has provided. It’s like reading an issue of Epic, Illustrated and that has a significant appeal to me.

The challenge I have here, is to refrain from gushing about how much I like the nostalgic appeal of the eighties that Hickman has created for readers like me. However, if we are to look at my all-time favourite New Mutants – Illyana Rasputin – in this book she’s presented as the late 90’s early 2000’s version, and I can’t say I disagree with that. I have four representations of this character form various artists (still waiting on you, Bill Sienkiewicz – just saying!) and I like the development of Magik as she has grown up with the rest of her peers.

It’s also important to recognize the setting. The Shi’ar are my favourite alien race of the Marvel Cosmology and created in the eighties by Claremont and Austin – is it any surprise? But, this is essential to appreciating Marvel in the 21st century that readers need to be cognisant and accepting of the history that went before it.

Too often readers look at historical antecedents of their favourite literature and reject it because it doesn’t meet with the norms of the day. Readers don’t have to accept the values that were presented twenty or thirty years before they were born, but they have to accept that was the norm for the time. It’s the same sort of situation that I encounter when I teach History. Yes, we learn about the values of the past and we accept them, but we have to incorporate them into our understanding of the development until now.

I thoroughly enjoyed this issue. Bobby’s levity, Sam’s sense of grounding, the Shi’ar hierarchy and the ease in which the team of The New Mutants were able to slide back into their original combat roles when pressed. But, the fact that Hickman’s interpretations of the Mutant Continuum today easily fit into this book made the Hickman perception of the various incarnations of the X-Men acceptable and entertaining.

There was playfulness, banter and a complete repudiation of the established protocols that was reminiscent of the days of the youthful “Breakfast Club” rebelliousness of the eighties that tied in with Hickman’s modern vision. Let’s face it, Illyana as a “Krakoan Captain” successfully juxtaposed the eighties vision of New Mutants into Hickman’s vision of this mutant team.

Yeah, I was overwhelmingly happy with reading this book this week and I have to say, that was the dominant spirit I went with.

I’m itching to talk with Hickman. I think we’d have a lot in common, but I’m simply happy to follow his continued interpretation of the Marvel Mutant Saga as we continue into the new decade.

However, I was happy with this book, and I wasn’t going to it pass me by this week!

Until next time, I hope you all see what’s good for you when it appears!

Pick of the Week: New Mutants #5