Happy New Year and welcome back!

This week, it’s the call of responsibility that governs this week’s theme in the comic lists. After all, it’s been a restful and relaxing holiday break but like the rest of the western world is realizing, the holidays are over and it’s time to return to the old grind for another year.

Sigh …. Why does it feel like doing the right thing is the wrong thing to do? Let’s get to the list for this week and take a closer look at some of the comic heroes who know this better than us. 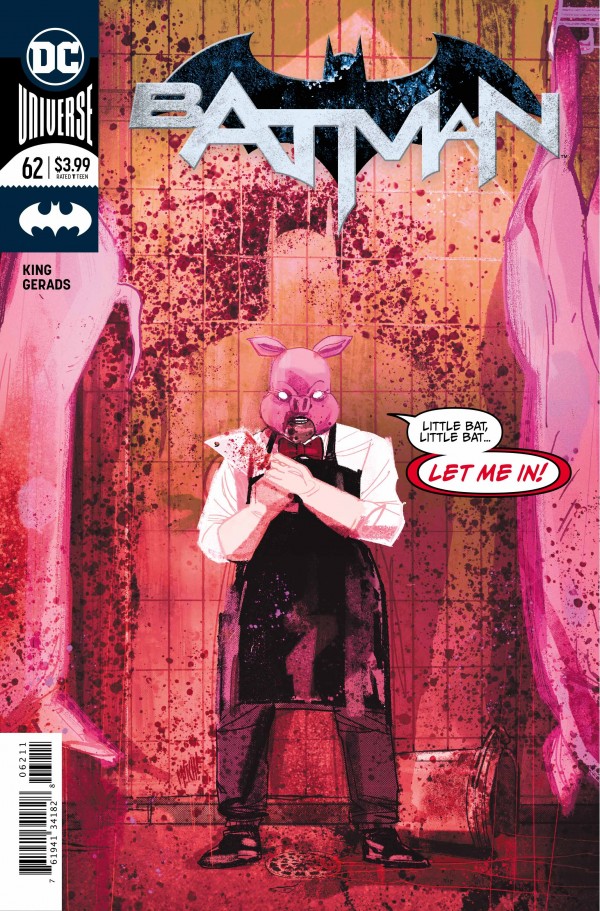 Even in a dreaming state, Batman still feels the pull of responsibility. Gotham is his city. The drive to protect its citizens and address the evils that plague Gotham is the Batman’s fundamental characteristic. Detective skills, strategic planning, inventiveness – these are all secondary to his sense of resolve. It’s amazing that Tom King can draw upon that and create such an array of stories.

Titled “Knightmares, Part Two – Lost”, Tom King is partnered with his brother-in-arms, Mitch Gerads to present this trip down the surreal. As Batman states in the last panel, it’s a metaphor, a myth, but it’s also very cerebral for the reader. The best thing for the reader to do is to sit down with the previous issues, read them in sequence and try to parse out details that make the significant message stand out.

In that sense, it’s a real mystery for the reader to figure out but it also underlines the Batman’s state of mind, given the recent personal crises he’s gone through lately: the cessation of his wedding, the attempted assassination of Nightwing and the recent threat to Alfred’s life. Bruce Wayne has a lot on his mind and there’s a real focus on the weight of all that responsibility in Tom King’s latest stories. But it’s the most responsible people who feel the implications the hardest.

Tom has many trophies on his own belt: Omega Men, Mr. Miracle, Vision, but I think it’s Batman that he’s going to be best-known for. After all, who better than a dutiful family man to understand the significance of the potential threats to the Batman’s family? Tom understands duty and responsibility on a familial level and this sense comes out in his writing. 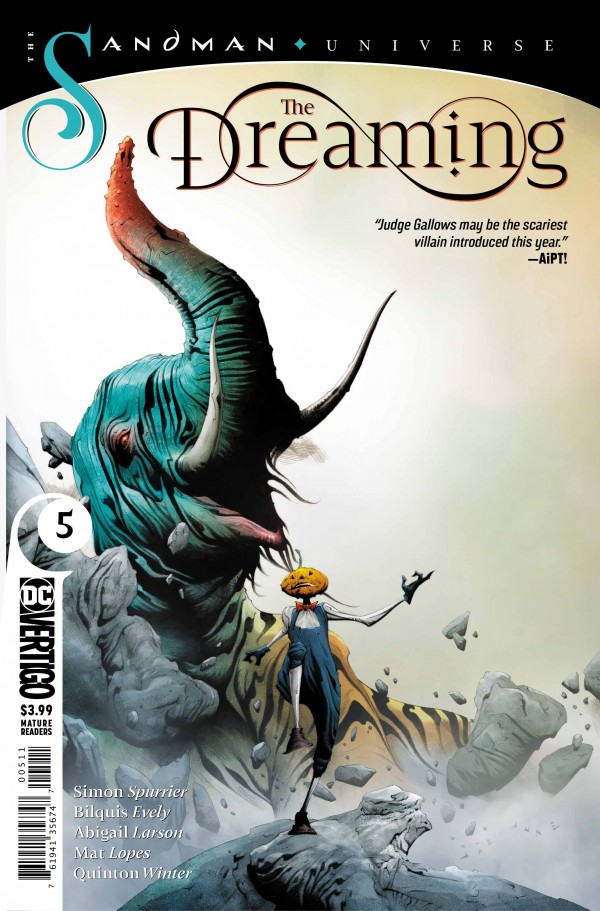 It’s Lucien who is the dutiful soul in this story. To an Extent, Dora too. It’s hard not to feel for them; they’re the only two denizens of the Dreaming who actually seem to feel some degree of responsibility and awareness of the decay of the domain. While Lucien is the dutiful steward, he appears to have a deeper connection to the realm and feels the absence of his master in a profound and poignant manner. Dora pretends at irresponsibility but it’s clear – at least in this issue – that she also has a more important role to play. We see hints of it in this story.

Si Spurrier has a gift for describing the metaphysical. I’ve always been envious of writers who can take intangible concepts that delve into the realms of the philosophical or who can write in the metaphorical level of language in a sustainable way. It may seem like existential, flowery bullshit, but it’s a real writing gift that keeps the writer hooked.

Bilquis Evely has won my heart with her work. However, her work is supplemented by that of Abigail Larson. While she is an accomplished and talented artist, I found that the interspersing of their work was a bit jarring. 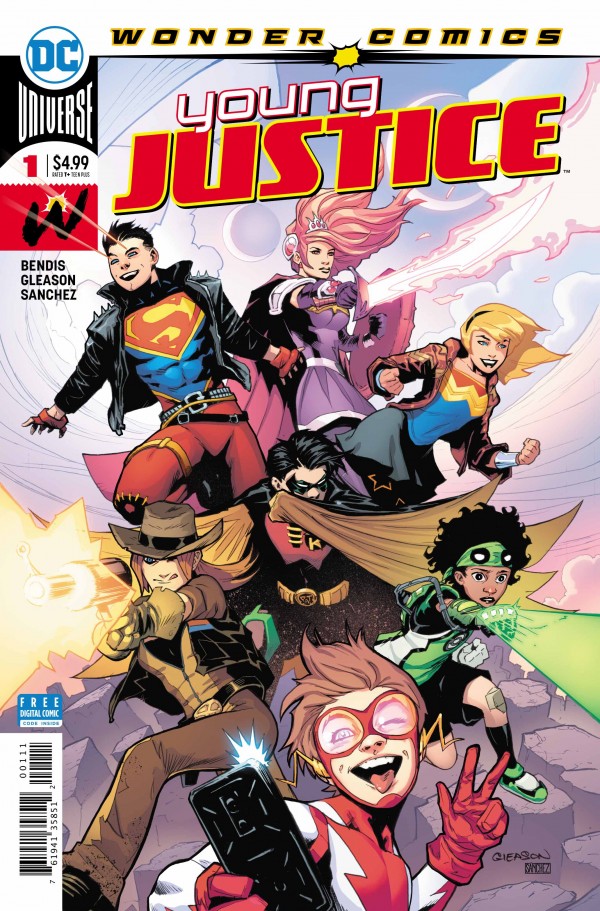 The instinctive call to action. Yeah, we’ve seen this group before but I have to confess, I loved seeing new iteration of Gemworld added to the reunion of the group and serving as a fundamental part of their new origin, so to speak. But I was also excited to see it bring back one of my favourite female characters from the 80’s back into solid action, Amethyst, Princess of Gemworld.

I think what I liked about Young Justice is the inherent recognition of that with great power comes … well, you know. After all, there’s something very romantic about young people with super powers and have the ability to change the world. Also, not discounting when young people can be dumb-asses, I think this book from Brian Michael Bendis and Patrick Gleason promises to supply ample entertainment and humour. 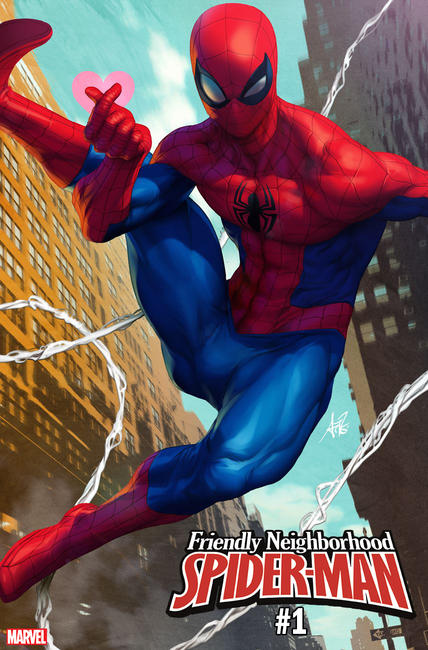 What would Peter Parker do? It’s the ultimate test, isn’t it? A former acquaintance of mine would use this as his mantra, though he wasn’t able to live up to it. After all, it’s more difficult to live up to than it is to say it. But there is something this ideal that is reassuring to try. This is the essential responsible character.

However, at the end of this book, Editor Nick Lowe basically asked himself the question: why would we do this? As he also points out, there are so many Spider-Man titles and in my opinion, this just drives a final coffin nail into a universal continuity across the Marvel spectrum. I mean, I hearken back to the days of the Secret Wars in the 1980’s when the entire Marvel Universe was put on hold while readers waited to see what sort of effect the maxi-series would have on the regular titles of the involved characters.

If you say that was a headache to manage, then yeah. It was. But it’s work – honest work and quite frankly, I hate it when people complain about the amount of effort it takes to do something that you’re supposed to love. If you’re not in you job for what you like to do, then you are definitely an unhappy person. But if you think it’s too much work to do in comics, then that also dilutes the sense of responsibility you have to your readers.

To be honest, I’m not sure I agree with Nick’s answers to his own question. While he touches on the notion that this is a Spider-Man with a narrower focus and a more defined set of neighbourhood responsibilities, the comment about it being a “cash-grab” also rings true.

However, he’s lucky that Tom Taylor and Juann Cabal have crafted a story that does that. He’s right – it is a Spider-Man that focuses more on the essential characteristics of the original Spider-Man with real worries, problems and a set of responsibilities that he has to balance out with being Spider-Man and Peter Parker. But, at the same time, then those other titles need to be halted. Telling two stories gets in the way of character clarity and it seems like an irresponsible handling of the property – at least, that’s my opinion.

I have to say though – I have missed this Spider-Man. Simple, down-to-earth and quite frankly, the type of Spider-Man whose ideals we can adopt as our own because we better relate to them. 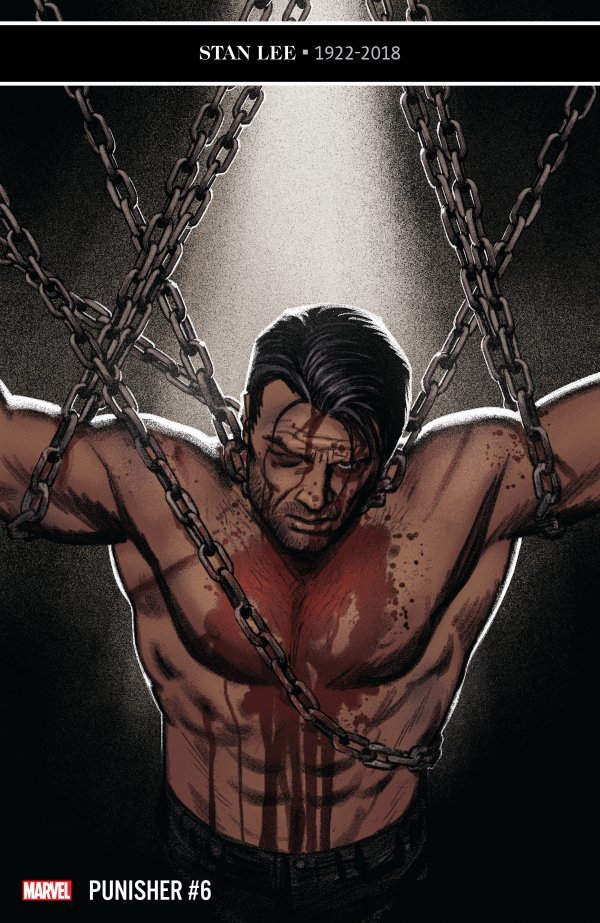 I mean, you want to talk duty? Talk about duty that’s borne out of a sense of red-hot revenge and that’s the Punisher. Still, in this issue, we see Frank Castle captured by Baron Zemo. While it’s clear that the Punisher has done enough damage to Baron Zemo’s tiny totalitarian nation (I mean, they can’t get eggs because of international sanctions!), he’s starting out the book as a prisoner and that’s frustrating for me, and I’m sure for Frank Castle.

I want to see the Punisher punish.

But, there’s a clear obligation on the part of Rosenberg to set up a story here. Obviously, this is a set up and there’s a bit of time dilation here as we see Castle grow a full, solar plexus-long beard, but it’s apparent that something is going to happen. However, I just don’t buy that Castle would be in Zemo’s clutches that long for him to grow a beard like that. Castle would either have killed his way out of jail or died trying. It’s like he forgot his self-imposed responsibility.

Sad to say, this one just didn’t do it for me.

There’s a lot of talk about honour, family duty and code of conduct in this issue from Kieron Gillen and Angel Unzueta. You know, the types of responsibility that we kinda take for granted, but in this book, where we have such a talent in Kieron Gillen who understands the character motivations so well that these themes can be very easily explored and presented.

Star Wars is probably the best title that Marvel is putting out, in terms of quality, comprehension and vision – it’s a success and while we see the “Star Warriors” dealing with new situations, they do them in ways that make us believe and want to see more of this storyline unfold and being situated between Episodes 4 and 5 make this a “sweet spot” for those of us who are old enough to remember seeing them in the theatres, live that joy of re-exploring these characters again. 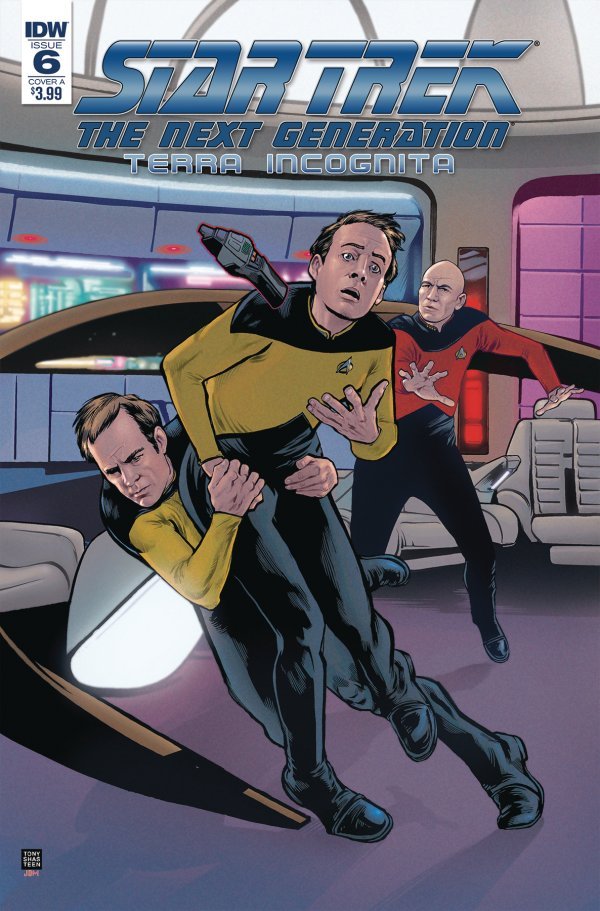 The Tiptons are definitely aware of their responsibility to maintain the Star Trek continuum in their storytelling. You can see it in the careful attention to detail in dialogue, character motivation and Trek history while at the same time, not sacrificing their own creativity. They take their craft very seriously and it’s a joy to read one of their stories.

In this issue, we see the continuation of the mirror universe infiltration into the prime universe. It seems like the Mirror Barclay has a secondary agenda, after all. Could it be that he actually enjoys living in the regular universe? He surely resists going back when the opposite Data comes looking for him.

I also enjoy knowing when they’re working on their stories. I like to think about what they’re writing and then try to match their stories with my own predictions.

Carlos Nieto does a great job in supplying the art for this issue. I know he’s an artist well-respected by Scott Tipton and it’s reassuring to see that degree of respect amongst creators.

Like I said, they take their responsibilities very seriously and I have to recognize that sense of responsibility, as it’s the theme for this week and give the recognition of the pick of the week to this talented team of Trek-creators.

I love their dedication and in pursuing the presentation of this property in all its intricacies to such a fine degree is something that shouldn’t be overlooked.

Well done, gentlemen. Please keep doing what you’re doing. After all, it’s your duty as Keepers of the Canon.

That’s it for this week! Until next time, may I continue to be as responsible as these talented creators!