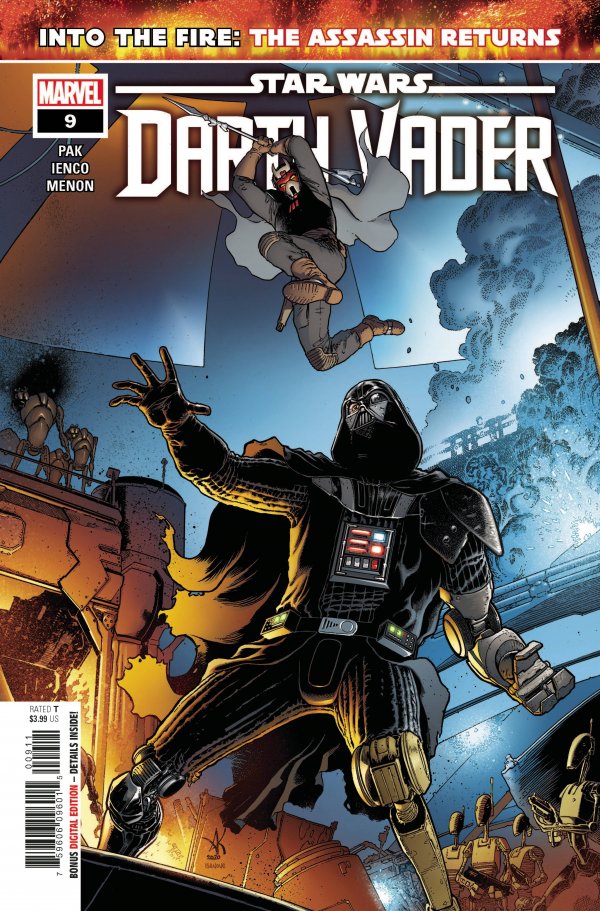 I am still in solid admiration of Raffaele Ienco’s art. He has captured the dynamic movement of Vader’s combat while still managing to portray the inner conflict Vader still has in his mistreatment by the Emperor. I think it’s this portrayal of memories that lends itself to a greater understanding of this character.

It’s possible to admire Vader without admiring the villain in him. What I enjoy about this character is the amount complicated backstory behind him. Remember, for the first three episodes of this franchise, Vader, or Anakin Skywalker, was a character wracked with self-doubt. He was too young to begin training but he was thrust into a world because of his strong connection to the Force. However, that didn’t deter him from being someone to be reckoned with, despite his ambiguous origins. However, in the next two episodes, we saw more of Palpatine’s influences work on him and corrupt him to the dark ways of the Force. However, if we want to completely absolve Vader of his fall into the Dark Side, we can look at the personal amount of resilience he has, and I think Greg Pak has completely captured that aspect of Vader that is deserving of admiration.

In Part IV of Into the Fire, titled: “The Assassin Returns”, Vader is trapped on the planet of his origin – Mustafar. It was where the Emperor recovered him after the soul-crushing battle with his former master, Obi-Wan Kenobi. For some reason, this lava-filled planet will be more of Vader’s homeworld than Tatooine was because of the pain he felt in transforming from Anakin Skywalker to Darth Vader. This is where the Emperor had left him, crippled, unarmed and denied the use of the Force in order to not only punish but prove himself worthy of learning his new Master’s secrets.

In this issue, he has learned the secrets of the Eye of Webbish Bogg, held off the Sith Assassin Ochi and now has to face an onslaught from his droid mercenaries, who Vader threatened last issue that he wanted their parts.

Remember, Vader is mostly cybernetic with two missing legs, an arm and a whack of other undefined injuries that require the use of artificial parts. Vader, like Obi-Wan described in Episode IV is “more machine than man now” and yet, he is able to ignore these impediments, replace missing parts (a throwback to his boyhood mechanic nature), use whatever weapons are at hand and still manage to evade the assassin and discover Webbish Bogg. Of course, that was last issue, and yet through sheer resilience of mind, of spirit and determination to find answers that he does not know, he also overcomes Webbish Bogg to discover a Sith Wayfinder that will lead him to even more information and secrets that his master is only privy to.

You see, it’s not just about the physical threats. Even with reclaimed obsolete droid parts to replace his missing limbs, or the lack of the Force, Vader is the living embodiment of will made physical. He says little, but his demand makes up for his lack of voice. He withstands pain to an unimaginable point (surrounded by melting lava, withstanding physical assaults be droids, etc.), and simply utters forth monosyllabic grunts as bare acknowledgement of his pain.

Vader is a classic example of a stoic. You know, a character who experiences disappointment, discomfort or even pain and complains to no-one for fear of upsetting a greater good? Well, in this case, Vader is in fear of upsetting a greater sense of understanding and this decries his villainous nature. Even though we KNOW him to be a master of evil, he is not evil’s master. Vader simply wants to know the mysteries of the Force, whether Dark or Light, because this he was a kid who had nothing growing up and knew that if he had power, he would never feel weak again.

Pak has this perfectly captured in this rendering of the character. We understand his motivation through the dialogue he crafted, not just in this particular issue, but in the entire arc. However, in this issue, when Vader says nothing throughout his entire encounter with the Droid Pirates of Bestoon, we see his sense f determination. In fact, it is through the dialogue of the Droid Pirates that we gain this understanding. It’s like the absence of light makes the darkness more pronounced and while Vader could be commended for his ability to combat the Droid Pirates with such limited means at his disposal, their commentary throughout the battle makes him such an admirable force of resilience and resistance.

I think that’s what I love about this villain; not just his mastery of evil and the power he projects – anyone can do that. If you are in a power position and have the upper hand, it’s easy to be the bad guy. But, Vader’s dogged determination – his pursuit of Princess Leia and the stolen Death Star plans in Episode IV, his willingness to search the Millennium Falcon, his insistence of facing down Obi-Wan Kenobi and finally, the choice t pilot his own starfighter to take on the attacking rebel force – all these things are underrated as part of his character. However, with over forty years of backstory, Pak has epitomized the perfect description of this villain’s true resilient nature – and damn it, if I don’t want to be Darth Vader right now.

Look: the world is in the grips of a global health emergency. The pandemic has severely limited what we can all do in our neighbourhoods. We can’t visit friends or places of entertainment. We can’t shop for fun, just for necessities and tourism is right out the window. But, while our freedoms may be restricted, it doesn’t mean that we are imprisoned. Our spirits are free. We can exercise outdoors wherever we want; we can purchase goods from businesses that will leave our goods on the curb, and as long as we maintain that safe distance from our neighbours we are free to visit and chat.

But we are still free and I daresay we have a lot more freedoms going for us than Darth Vader does, still in the grips of his master.

Is it possible to be inspired by a villain? Well, like I said, Vader has a tremendous amount of backstory and is a complicated character to write. However, Greg Pak has done exactly that. He has given us a character who is not only worthy of his own comic, but a story about him that lends greater value to the entire franchise. In my opinion, he’s made Vader a greater character and one that I definitely admire, if you can understand where I’m coming from!

Until next week, stay resilient!