I find that looking fondly back at the past helps me to look forward to the hopes of the future.

That’s the province of comics in my opinion. Comics are the rightful successor to the pulp literature of yesteryear. These were stories that captivated the imagination but were set in a time where everything seemed to be new, but it wasn’t. The people of that time had the same emotions and perspectives of the people around us today – the same collective imaginative desire to be told a story.

I love the flavour of a pulp story.

What is a pulp? A pulp is a tale that fits into a popular genre. A sci-fi, a Western or a horror. They use characters with exaggerated features or have very simple ambitions or issues. They are easy to understand but have a relative poignancy that endears them to our hearts.

Pulps are things of the past that have a simple beauty. Let’s get to my selections for this week. 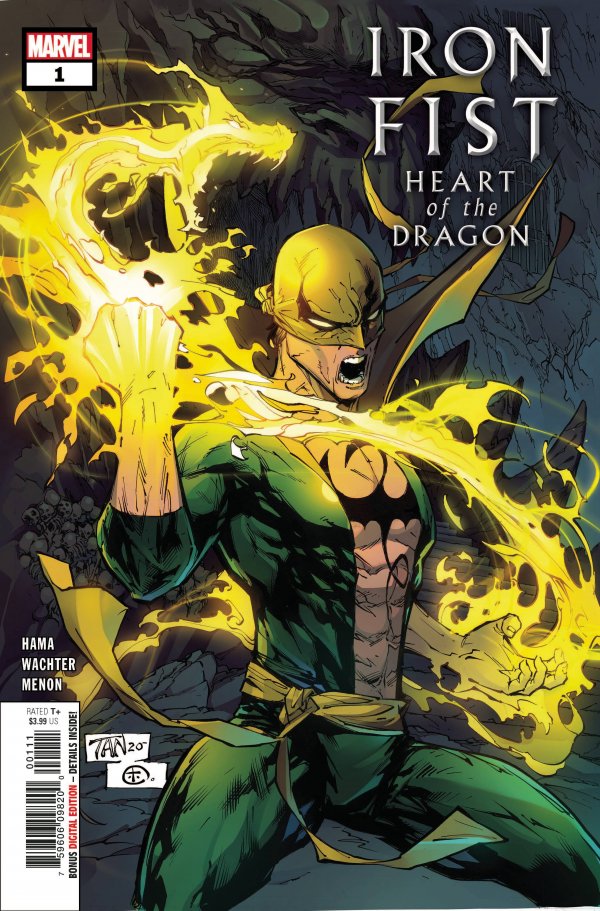 Speaking of the past, iconic veteran Larry Hama provides the scripting for this character that originally is a throwback to those pulp days of adventurers. Iron Fist stemmed from a time in the 70’s when martial arts films were the rage, and this comic, along with Shang-Chi, the Master of Kung-Fu, were representations of that trend.

Of course, I gotta love that cover by Billy Tan!

In this issue, we see Danny Rand, the Iron Fist, with his companions, Luke Cage babysitting Rand’s ward, and his spiritual advisor, Fooh, are about to embark upon a journey back to the Heavenly Cities in order to protect the dragons of those cities. It’s a good start and utilizes the same enjoyable elements we saw in Matt Fraction’s interpretations of the character.

However, what strikes me most in this comic is its use of stereotypes which marks this iteration of the Iron Fist as a reminder of those pulp days. Fooh, the Iron Fist’s sidekick has an accentuation that leans towards a comedic depiction of the character, so ably pencilled by David Wachter. Clownish, clumsy and possessed of a sense of humour that one would expect from a sidekick from those days (think Uncle Marvel or Plastic Man’s Woozy Winks), Fooh is pure comic relief.

Even the idea of there being mythological Heavenly Cities is a wonderful feature of a pulp-era story. Think about Edgar Rice Burroughs or Robert Howard – these writers created fantasy worlds that were accessible in some way from our own reality, either physically or distanced by time. They still had a connection that readers could immediately appreciate, and the mystical gates that Danny Rand, as champion of one of these Heavenly Cities, K’un L’un, can access just as easily.

With that access comes acceptance. It certainly has some campy bits with Pei, Danny’s ward and a martial arts child-prodigy herself, is somewhat stereotypically a “cute child” character-extreme, but that’s part of pulp literature and we can accept that. But the Iron Fist is one of Marvel’s most memorable characters and the newer developments of this character that I saw in Matt Fraction’s The Immortal Iron Fist in 2009 really add to the depth of this character and Larry Hama and David Wachter are to be commended for continuing those story elements. I think they add to the pulp fantasy value and that’s exactly what I enjoyed reading this week. 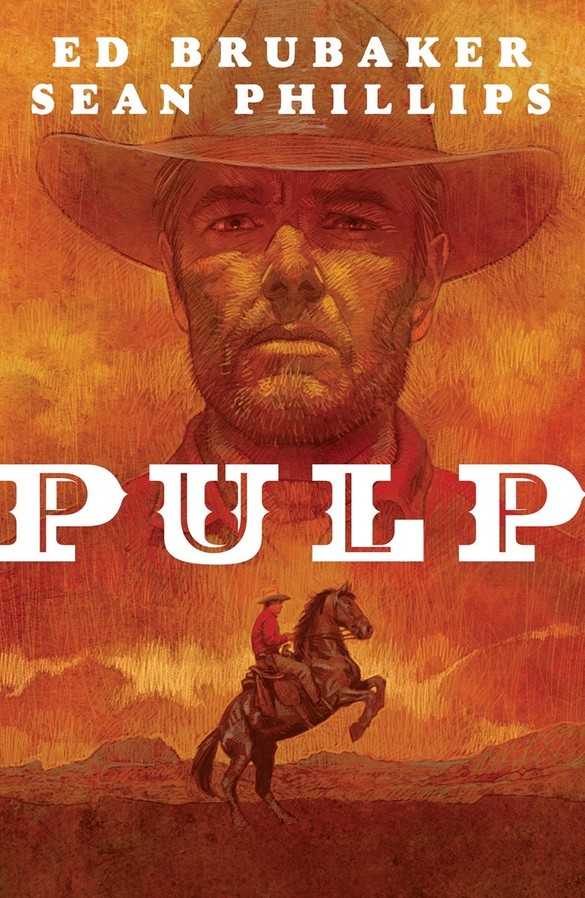 Probably the finest recent story in this genre that I’ve had the pleasure of reading.

Of course, the title says it all. You know what you are going to get but the idea of a story about a pulp writer who writes about his own real-life adventures is not only a clever twist on the genre but reveals the talent of this storytellers.

Set in 1939 in New York before America’s involvement in World War II, we meet Max, veteran storyteller of western pulp stories struggling to make ends meet with tales of his far-distanced youth. Plagued by old age and bad health; threatened by being replaced by younger writers who will work for less, Max, quite simply, needs to make money – fast. Thinking about his younger days in the Wild West of robbing banks and stage coaches he comes up with a scheme that takes on unforeseen developments.

It’s a simple premise but in the first part of this 72-page story, we are able to get the measure of Max’s character. Max knows what’s wrong. Stealing money may be a crime, but it’s a bigger crime to ignore evil when it makes its presence known, especially when he sees bullies in the world in the form of street thugs, men who like to beat on women or even Nazi-sympathizers. Old, impoverished and alone, Max is a character we can all relate to immediately. An underdog is an easy sell in storytelling. However, this is a pulp story which has a fantasy element that doesn’t seem to be present in this one.

That’s the draw. Max actually lived a pulp life. Now he’s faced with the bitter sting of reality and in the end, the only way to deal with it is to submerge himself back into those ways. Meeting a former adversary who actually validates his choice only sets him on his path to create one more adventure but this time it’s more than for the thrill or the glory – it’s the last, desperate choice he has.

I see so many comparisons to what’s happening in the world today. It takes courage to stand up to a bully but sadly, that’s not all. You need strength of mind, body and conviction to stand firm. You also need time. Max has courage but is lacking in strength. But he has the conviction and when the opportunity arises for him to make a difference, he doesn’t hesitate knowing that his time is short.

The juxtapositioning of reality and fantasy in this story create a wonderful structure. One that not only entertains but makes us think about our own values. What will we stand for? Would we do the same thing when the moment comes for us to make the same choice that Max does? In the end, stories emulate scenes of reality to test our own values. Pulp stories are supposed to be dramatic to celebrate the extremes of the human condition. We want to see heroes, brave and more gifted than us to allow us to dream and pretend that we can be the same. But in this story, it comes down to one pivotal moment that forces us to search within ourselves and see if we can measure up to one old man with a heart condition and surety of knowledge of the difference between good and evil.

America’s time with a bully in charge has ended, thankfully. The rest of the world will be able to breathe a sigh of collective relief as we watch a new leader take his place who is a mirror opposite to the previous one. An old man as well, to be sure, but one with conviction and a sense of decency that will allow America the opportunity to reflect upon its values and what it really stands for. In this case it has the time and it has the conviction.

Like I said earlier, pulp stories give me a great feeling of enjoyment … and hope. That the heroes of yesterday can show us the way to reach a future that is prosperous and also full of hope.

Pulp is my pick for the comic of the week. Read it and be inspired on this new comic day – and a new day for America.