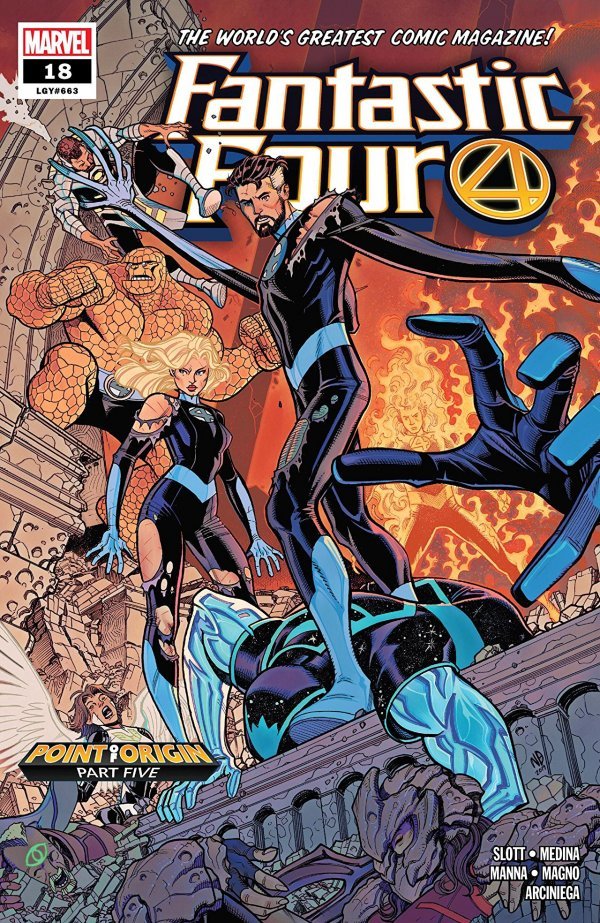 It’s a popular misconception that, in the end, revenge is its own reward.

It really isn’t. I’ll talk more about this later.

Reed Richards’ greatest crime is his oversight in accidentally exposing his friends and family to the cosmic rays they unwittingly encountered in the maiden flight of the Marvel many years ago. For that, his best friend resented and even hated him; his girlfriend managed to forgive him and become his wife and it has been the cornerstone of drama within The Fantastic Four for decades.

It’s been a repeated storyline in many a FF book that has included including Doctor Doom using the contents of Reed’s journal to break their trust in each other, erode Richards’ confidence. It’s been the source of discontent for Ben Grimm’s transformation into the Thing, given that his team-mates managed to retain their normal human appearance and relationships. For the Thing, in particular, it has been the source of many acts of vengeance and resentment. That’s certainly the driving motivation and case in Dan Slott’s Fantastic Four #18, titled “Worldbreakers”.

The story so far: the FF have retraced their steps in the Marvel-2, a copy of the original spacecraft that was to take them to the Planet Spyre. Landing on the planet, they discovered a society that had been preparing for their return as prophesized “world-destroyers” bringing them into conflict with the planet’s band of super-heroes, The Unparalleled. The leader of Spyre, the Overseer, ordered their destruction for fear that his secret of exposing his own planet’s population to cosmic rays would be revealed. His justification? The protection of the planet by giving its people abilities that could match the Fantastic Four. However, while this was the origin of the Unparalleled, the cosmic rays were also responsible for creating a disenfranchised and horribly mutated division of the population known as the Monster Mob. During this conflict, the Overseer’s secret was revealed along with the fact that the Fantastic Four’s accidental exposure was also a deliberate act of the Overseer.

This is a hateful revelation for Ben Grimm, whose heart and soul are more than heroic, they belong to someone who has a higher calling. The Thing is a hero whose super-strength and invulnerability are great, but have their limits. But time and time again, it has never been these powers that have saved the day, but the power of his convictions. Yet, in the light of this news, Ben can only see red.

Slott has tapped into a historically fundamental part of the Fantastic Four’s origins and put a new spin on it. However, it isn’t an invasive retcon that writers of legacy titles like this book are wont to do; it’s an important revisiting that absolves Richards of his miscalculations or oversights in the light of the Overseer’s deliberate and murderous use of cosmic rays to kill Richards and his friends. Instead of killing the Fantastic Four, the act became their crucible. This new revelation doesn’t detract from the origin story – it actually adds more value by transforming it from a hateful accident that Richards could have caused to a shared trauma they all survived and from which they all emerged stronger.

However, like all traumas, there is still a point in time that is the division point between anger and acceptance.

When Ben Grimm learns of this, the Overseer becomes the target of his rage. For years Grimm’s self-esteem has suffered because of his transformation. His friendship has suffered, believing that his best friend had caused it, by placing his intellectual arrogance above Grimm’s own welfare. Grimm wants blood to pay for all these years of torment and the scene where Sue Richards recognizes that is the point in time when acceptance needs to overcome Ben’s anger and his thirst for revenge. The look shared between the two is an expression of friendship that underlines Slott’s understanding of revenge in this story and what makes it stand out for me this week.

Before I continue, I need to acknowledge the wonderfully entertaining art by the tag-team trio of Paco Medina, Francesco Manna, and Carlos Magno. What stands out for me is the collaborative work in making these characters so expressive. It’s an explosively energetic issue with a lot of activity and the pace is a frantic one. Nick Bradshaw and John Rauch’s cover is certainly a match that would bring any curious reader to this book. Their collective work is definitely up to the task, and the look between Ben Grimm and Sue Richards is probably my favourite scene in the book. That expression is the emotional foundation for this story.

When bad things happen to us, either deliberate or accidental, it’s a natural impulse to want payback. After all, those events take something from us; either time, opportunity, something of value – whatever. We suffer loss and if we can’t replace what was taken from us, we want something – anything – to replace it, and vengeance is like fast-food: always there and easy to eat.

Ben Grimm is a noble character, but he’s still human and it’s within the realm of reason for him to satisfy that emotional need through revenge. The Overseer tried to kill his family and, in the process, mutilated him. But noble people usually have noble friends, and in this case, that’s Sue Richards.

It’s rewarding and endearing to see how Slott understands this. Overcoming traumatic incidents isn’t achieved through revenge, although the desire to hurt those who hurt us is a powerful one. In the end though, it doesn’t alleviate the pain of that loss, that injury that was inflicted upon us. It only exacerbates it because the loss is still there and the fact that you managed to inflict a similar amount of pain only makes you the same as which that what injured you.

What actually brings comfort is the reminder of friends who understand us. In the smoke and rubble that trauma causes, those who are standing with us are our true friends. Revenge isn’t its own reward, but the presence of good friends who understand we are in pain is a reward that is important to acknowledge.

I wouldn’t want a hero like Ben Grimm to go down that route, and clearly, neither does Slott. That alone makes Fantastic Four #18 the pick of the week for this week’s run.

I hope you look for friendship in place of revenge in your own trial and tribulations! Until next week!

Pick of the Week: Fantastic Four #18