The first review of the New Year! Why isn’t there a band around when you need one? Seriously … too much to celebrate this holiday season, yet every new comic review is a chance for celebration.

I’m extremely pleased with the selection I’ve managed to assemble tonight. There’s some epic storytelling along with poignant characterization and even a favourite fandom that is too much of a temptation for me to ignore!

Let’s get to the reviews! 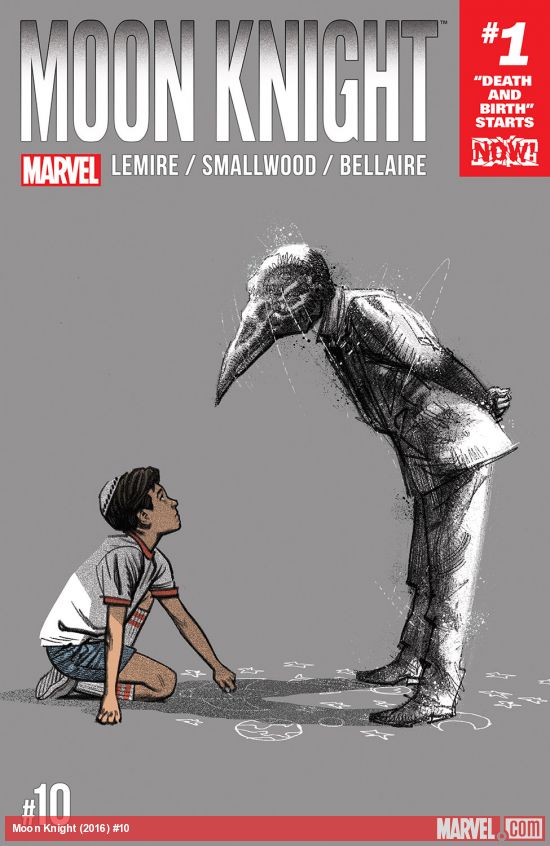 I think Jeff Lemire might be seeing his way to finalizing Marc Spector’s emergence from madness and restoring the super-hero to this super-hero book.

Lemire likes esoteric themes and overcomplicating stories. Let’s face it: Moon Knight is a street crime fighter with a bit of an esoteric background. Originally, he was just a knock-off of Batman, but over time he became something more. Lemire is capitalizing on that slight angle of strangeness and emphasizing it. However, that’s gotten old.

But, with this first issue of a new story arc, “Death and Birth”, perhaps that will change.

I want to see Moon Knight turn back into a superhero, saving lives and making a difference in the real world. If this is an allegory for overcoming mental illness, then so be it; but it that’s all this book is ever going to be, then I’m going to have go elsewhere for my four-colour fix.

Still, I have to say that the scene where a young Marc Spector is revealed to be talking to himself really hit the source of feels within me. Lemire knows his moments, that’s for sure. 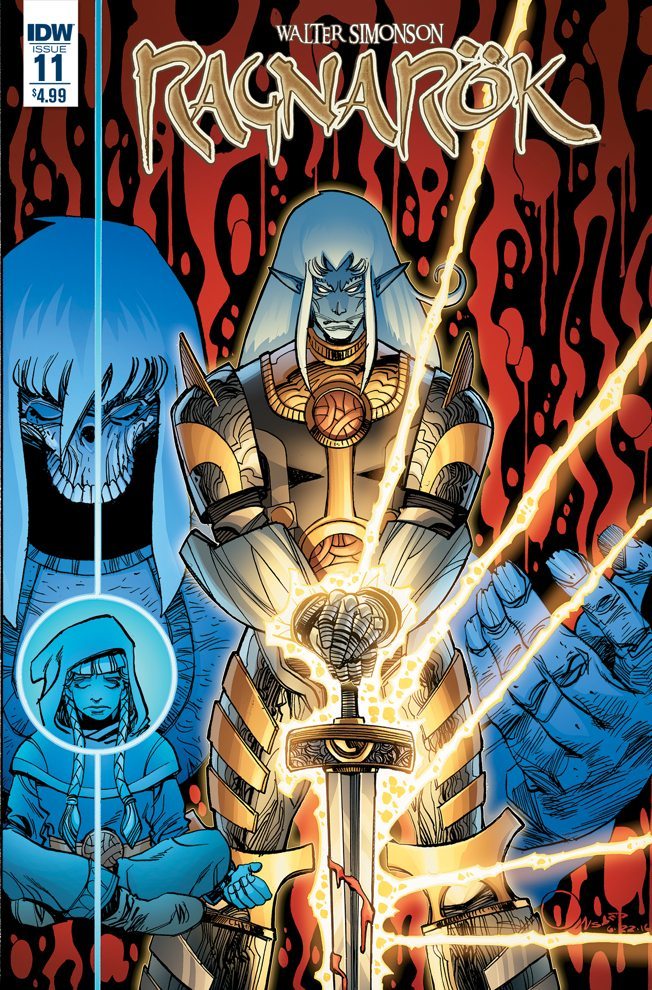 Too much love for this guy’s work to immediately start writing about it coherently. I always need a bit of downtime to process Walt Simonson’s work and Ragnarok is one of those books that makes you think. Of course, it’s not that the story is overly-complicated, but it’s the anticipation of trying to figure out where he is going with this snippet of the grand adventure that is yet to come.

I keep getting frustrated that the issues are so short and that the audience is only getting a slice of the whole story – but of course, that’s the idea! This is The Arabian Nights done extremely well.

Still, for the first time, I have a beginning sense of seeing behind the curtain. I have a feeling that I know where this book is going to go yet it’s been carefully crafted behind character investment. I love Thor’s new incarnation but I have also grown to love Drifa. Hey, I’m a dad of daughters. But even Ratatosk became much beloved to me as he was a symbol of Thor’s previous life and I was distracted by his death and the sense of loss that created within me.

Simonson is a crafty storyteller to manipulate this feeling to incite his readers to want to read more. Using the sense of loss to propel them forward into the story is a very devious trick yet when you consider that the entire story premise is based on loss, I chide myself for not seeing it earlier.

It’s the rare story that keeps me in the dark for long, and Simonson has accomplished that feat. This is one of the five comics that I regard as truly irresistible. 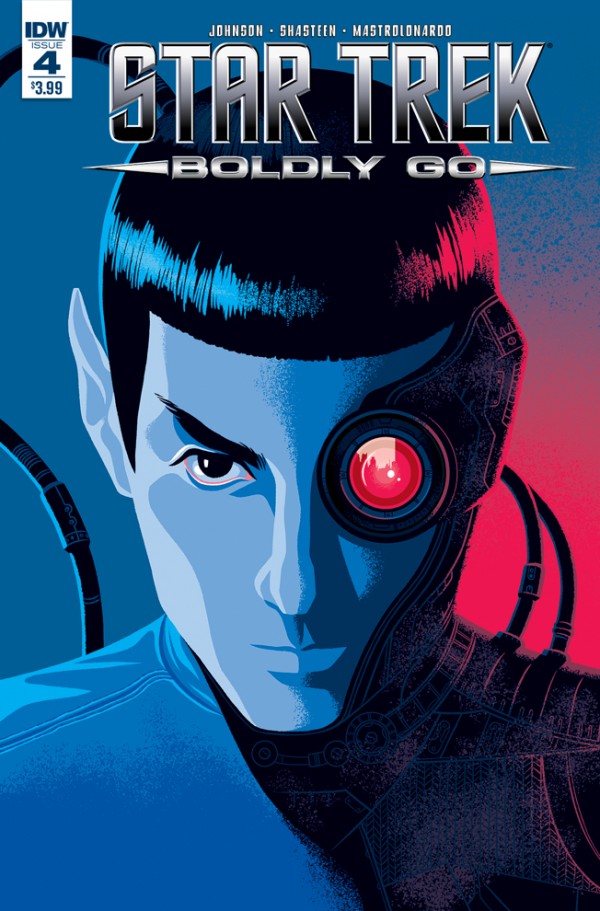 Mike Johnson and Tony Shasteen have my unbridled devotion and loyalty for making the Kelvin Timeline something that I can enjoy – and they will always have my thanks for that.

This is the last issue in the Borg encounter story arc and as much as I enjoyed reading it and the resolution, I just found that it ended too fast. It’s like it needed just one more issue to properly display Spock’s assimilation encounter with the Borg or the joint battle with the Romulan Fleet. Johnson had a great story here and I can’t help but feel that it ended too quickly.

I was certainly enthralled by their treatment of the Romulans in this universe. It was fairly daring to introduce a race into the comic that even Paramount hasn’t introduced in their films yet. Not to mention the creation of new crew characters and, as I indicated the last time I reviewed this comic, bringing the Borg into the Federation years before the Next Generation era was also a bold step.

I can hear Zachary Quinto’s voice as I read his debate with the Borg during the assimilation process; it’s uncanny that Mike Johnson can accomplish that fact.

And, Tony Shasteen can leave his doubts behind about properly illustrating the iconic Borg. He certainly had their number as his illustrations depicted the Borg as a hegemonic species rife with technological parts. His detail and attention to their structure was excellent.

IDW has got a gold mine with these two creators. Their interpretation of events after the third Kelvin film has taken the crew to new heights and they even manage to make the absence of the Enterprise such an authentic and workable element in their storytelling. With their ingenuity, action and character interpretation, they manage to bring a sense of dynamism to Kelvin Star Trek that makes it not only accessible to die-hard prime Star Trek fans like me, but also incredible enjoyment.

I constantly look forward to reading their work every month, which is why they certainly have earned my honorable mention for this week. 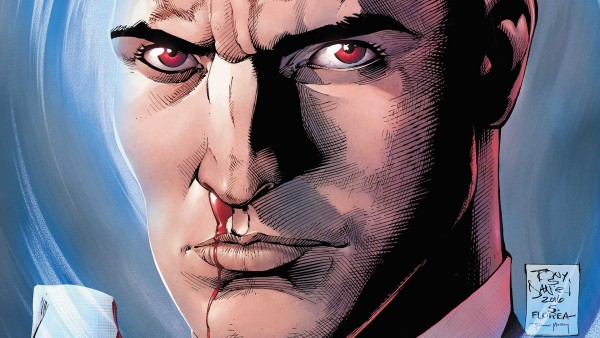 Maxwell Lord, baby! Yeah – what a memorable villain and just the right one to bring back to DC’s Rebirth!

This is a tie-in to the Justice League vs Suicide Squad event which is gaining a lot more traction than would have commonly believed. After all, capitalizing on the feature film of the Summer of 2016 is an expected angle to take with this property and it sets up for the Justice League film that is eventually making its way to the forefront of people’s expectations.

What a great cover by Tony Daniel. It definitely captures the mood and mentality of this psychotic mastermind and strikes the right chord in setting up to read this book.

What an incredible re-introduction to Maxwell Lord that Tim Seeley and Christian Duce have crafted for us! Not only do we get Lord’s origin story in the Rebirth, but we also get a sneak preview of his motivation and what we can expect from this character in the future. The only way to effectively describe this is as a triumphant return to the DC Universe! 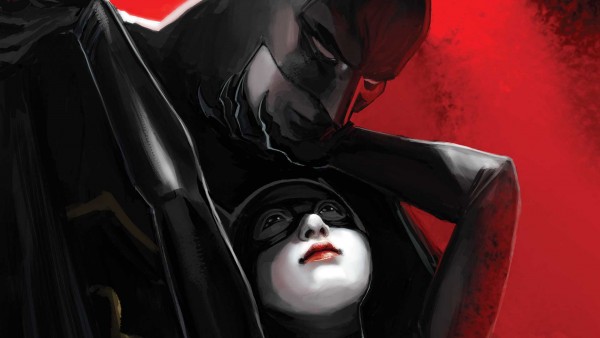 “Rooftops, Part One” – what a beautifully tailored love story.

I’m not one for love stories – after all, I have a carefully crafted image to think about.

(I’m sitting in front of a stack full of comics in a room in my basement surrounded by Star Trek miniatures and super-hero statues. I’ll let you decide if my image has been well-crafted or not.)

I’m not familiar with Mitch Gerads’ artistry but I can attest that his work is definitely the right one for this book. The lines and colours are soft and rife with emotional content. It’s almost a water-coloured effect which has perfectly reinforced the sentiment Tom King was clearly going for.

There is definitely a wistful tone that King has inserted into this book. It’s a lovely story of two people desperate to find themselves a corner and defy all the external pressures of their lives to simply be with each other. It’s a poetic masterpiece and it’s so hard to ignore the poignancy of this issue.

Which is why, despite my avoidance for love stories, I have to give this one the coveted Pick of the Week! There’s just such raw passion and desperation in this story and King really managed to hit me with it. This is the exemplar of superb storytelling that you want to hold up when talking about comic books.

Hey, I’m not a romantic guy, but I was touched by this issue – and that’s no mean feat! Ask my wife!

And that’s it for this week. Of course, I’m still in celebration mode, and after the rave acclaim I’ve given to Tom King, Tony Shasteen, Mike Johnson and Tim Seeley – I hope they are too!