Toronto is gearing up for the Fan Expo Comic Show in March and I am keeping an eye on the guest announcements! You see, every comic junkie always wants to know who’s coming well in advance. The more time a collector has, gives him – or her – the opportunity to plumb the depths of a vast collection in the hermetically sealed room in the basement in order to find THE ONE comic that has to get signed by these visitors.

Hey … it’s a labour of love, and it is not to be taken lightly.

Even transporting the comics to the con is a Herculean act. Not only do you need to have a sturdy, yet compact container to transport said comics, but they must also allow for fast and easy access. Nobody wants to the fan who holds up the line searching for and removing the prized piece of literature from its protective plastic wrapping. Plus, there’s also the time needed to replace said plastic afterwards but woe betide you should said celebrity actually agree to a photo with you.

Cons have their challenges.

I have friends who feel that the act of signing a comic by its creators is actually vandalism. While I wouldn’t go that far, the autograph is a personal thing: a memo of that time when you and the comic’s creator(s) shared the same point in space and time for a brief spell. It’s a bit of a fallacy that the signature of the creator will add to the value of a comic. It would definitely be a point of interest and a collectible that will certainly be prized – and will make a difference with insurance policies – but as for increasing value, it would have to be verified and certified. Yup, things get more difficult as technology has advanced, which is why, from my perspective, I rarely get comics signed any more.

Now, hardcovers? Yeah, that’s a whole different issue and a lot of painkillers for my back. Imagine bringing the entire Mike Mignola Hellboy hardcover treasuries with you to get signed. Well, it impressed the heck out of Mignola, that’s for sure, but I didn’t walk comfortably for the next three days afterwards. God, I just hope that I’m in good enough shape to get my Absolute Sandman editions signed should Neil Gaiman ever appear in Toronto again.

You can be sure that Popmythology will be covering this show with great anticipation – especially after some of the “backstage” rumours we’ve been hearing about the guests who will be in attendance. Trust me … this show is shaping up great for comic guests!

The Legend of Wonder Woman #1 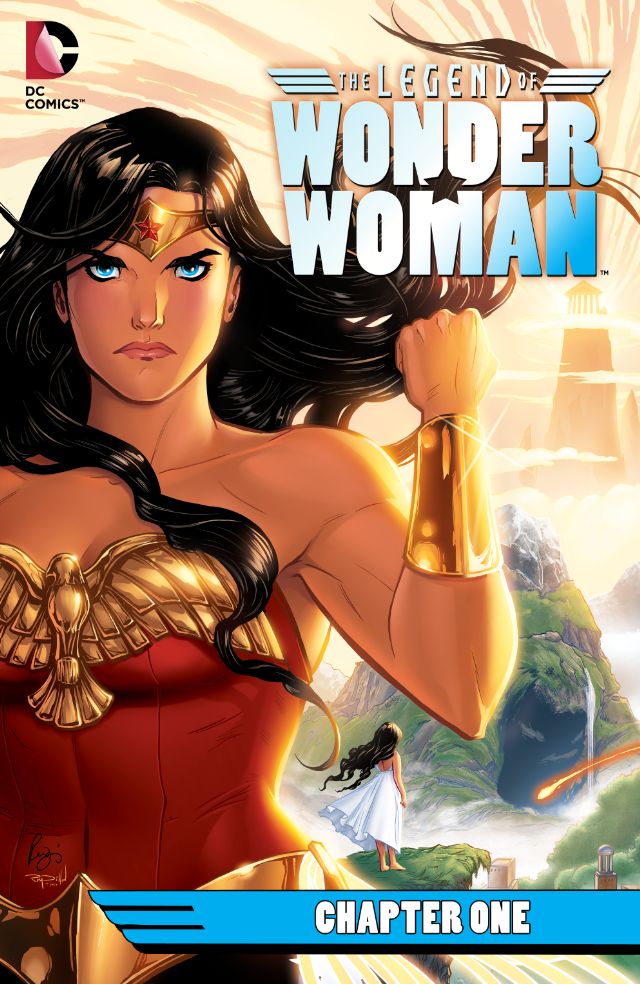 Okay, I’ll be the first to admit that I’m not a Wonder Woman fan. I’ve found her to be a reliable source of social gender-focused storylines that have demonstrated themselves to be repetitive and boring.

However, I was overwhelmingly surprised and pleased by Renae De Liz’s detailed and mythologically respectful treatment of Wonder Woman’s origins. Not only does this penciller and writer bring us the most complete and thorough examination of the earliest beginnings of the Amazons and Princess Diana’s histories but it does so in an epic storytelling fashion that makes us look at the child and daughter first in order to prepare us for the woman she will eventually become.

This book takes its time in describing to us Diana’s surroundings, her mother, her friends and the way she sees her role in the world. There’s no rush to drag her from Themiscyra into the outside world and we are quite content to allow De Liz to purposefully and slowly appreciate the character of this hero-in-waiting. I was thoroughly entranced by De Liz’s portrayal of Princess Diana, the child and found a new appreciation for this character.

The artwork is fairly good. It’s bold, solid and Ray Dillon’s inking certainly adds an extra level of appreciation for this book, from my point of view. This is a solid winner with me and I am looking forward to more of Diana’s development as she gradually develops into what I think will be a grander representation of this classic heroine. 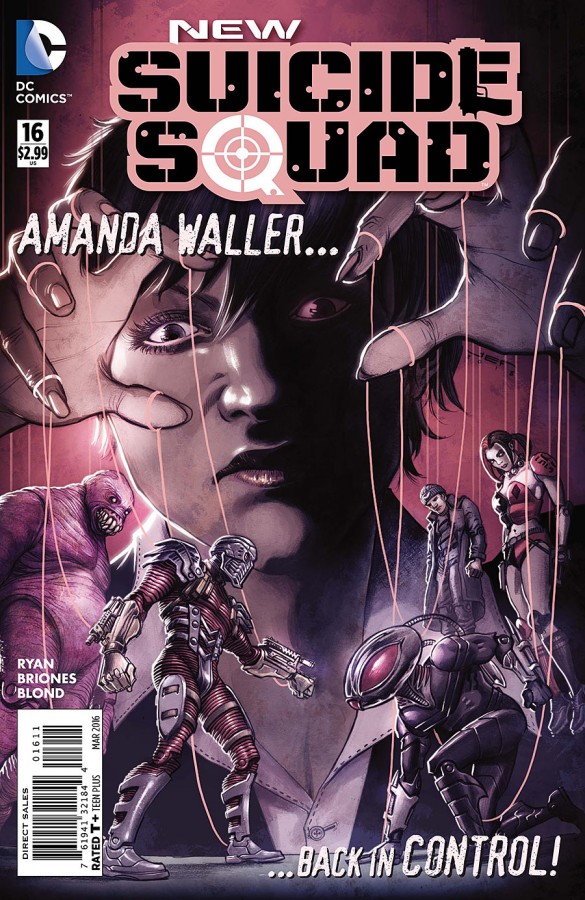 Sean Ryan has the pulse of this team. This was a pretty decent ending to a story arc that should prepare us for a new one with Amanda Waller’s return to power. I confess I liked the old Amanda Waller but this new one makes a lot more sense for the character. Phillipe Brionnes delivers exceptional action and characterization with his pencilling and all in all, this is a DC book that I look forward to reading out of a sense of seeing just what these forgotten criminals are up for next. 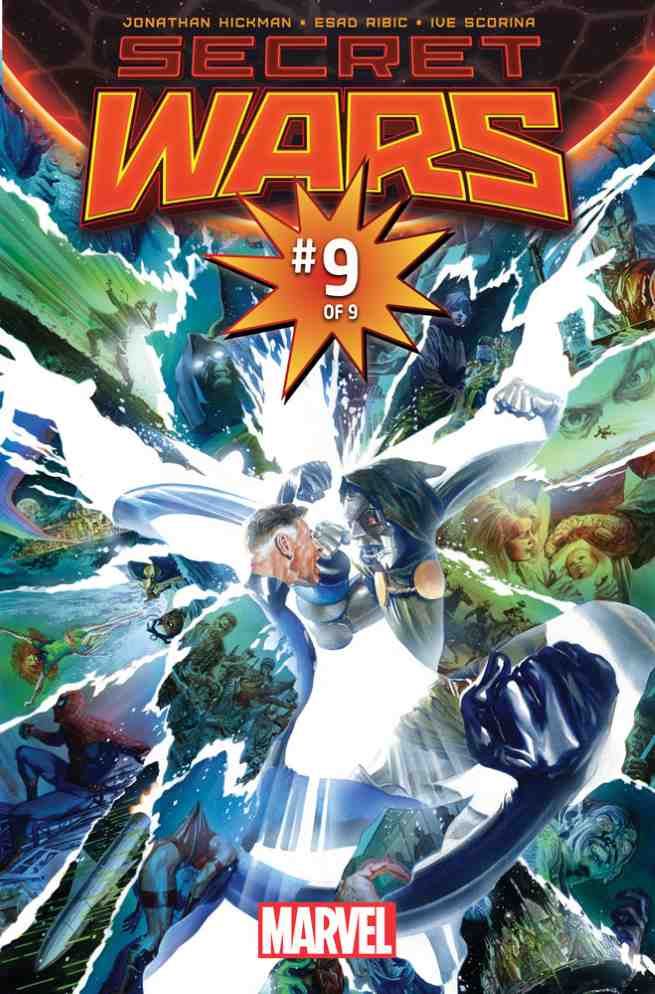 To use Wolverine’s vernacular: it’s about flamin’ time!

In all seriousness, I confess I need some help in figuring this one out. I mean, it’s hard to ascertain the impact of this series upon the rest of the Marvel Universe. Given that Marvel doesn’t seem to care too much about the nature of the maintaining the continuum as much as they did back in the days of the original Secret Wars, then that pretty much diminishes the idea of initiating this comic in the first place.

The first Secret Wars actually had relevance and a meaningful effect upon the Marvel Universe. It created new heroes, formed new teams and made significant changes in the established characters in the 616. After reading this comic, I have to say, I didn’t see its importance. Sure, there are some changes that have been already revealed: Miles Morales and Doctor Doom’s restored face as two prime examples, but as for everything else – well, I hate to give anything away, but suffice it to say that this was not the ending I was expecting. In fact, this is the way that the universe begins: not with a bang but with a whimper, if you like.

I feel very nostalgic right now. I want Jim Shooter to hold me and tell me that everything is going to be alright. 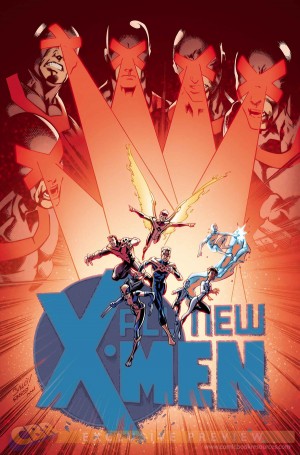 Didn’t I cancel this title from my pulls? I thought I had. Oh well, the best laid plans of mice and men, and all that …

First off, let’s be nice: it’s a gorgeous cover. The stripling new X-Men are clearly menaced by grumpy old Cyclops the Elder in a true throwback to the 1980’s. I can almost see the banner “WELCOME TO THE X-MEN, X-MEN – HOPE YOU SURVIVE THE EXPERIENCE”.

Sigh … but that’s where it ends.

Send them back to their time, please? It just doesn’t make any sense to keep a comic team around whose byline begins with “ trapped in the present …”; that in itself presents to the reader that this team is an aberration that should only be regarded as a temporary thing. There are too many things that need to be done with the X-Men and bringing back a younger version of the originals to compete with the present ones is only going to confuse new readers and effectively present paradoxes that are only going to require other aberrative methods to solve them.

No offence intended to Dennis Hopeless – this was actually not a bad piece of writing. It ended a useless arc and opened up the door for this book to end. Mark Bagley’s art is absolutely stellar. Great talent but I wish he was working on a better concept. 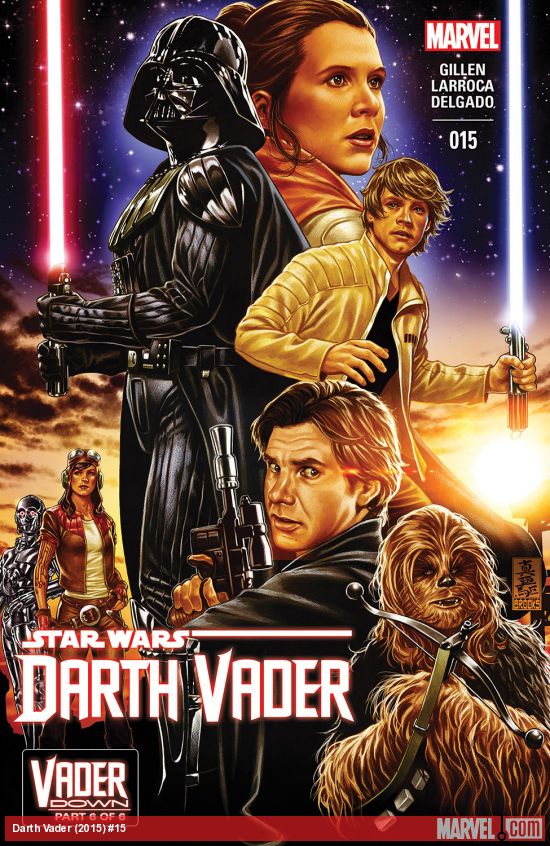 This was supposed to arrive last week but for some unknown reason it showed up this week. Oh well, vague and mysterious are the ways of the Dark Side.

This is the final Part (Six) of the mini-event, “Vader Down”. Without a shadow of a doubt this comic is one of the best things that Marvel has got going for it right now.

However, I have to confess that I was not overly impressed by the ending of this particular book. In fact, I have to say it was a little bit of a let-down. I mean, I ended in the way that it needed to end, but it was a subdued completion that really didn’t reflect the intricacy of Vader’s plans nor the dramatic conclusion to his survival of the catastrophe he had landed in. It was a pretty banal ending that didn’t do proper justice to its lead-up. I hate to say it but I was actually disappointed and that’s the first time I’ve ever said that about this book. Hopefully, Messrs. Gillen and Larroca won’t disappoint me next time.

And that’s about it for this week.

After careful consideration, I have to say that the comic of the week has got to go to …

The Legend of Wonder Woman #1

Loved it … it was an elegant book that made great use of patience and careful and proper portrayal of characters to see the true worth of this embryonic hero. I felt this book had an epic, poetic quality to it that made it not only enjoyable but made Wonder Woman truly … legendary. A great book and I can see myself picking it up again next month and definitely holding out for the hardcover. Make sure you add it to your own pull lists and good luck with your own labours of love, whatever they should be!