Looking over my last few reviews, I can’t help but notice a decided lack of Marvel titles on my pages. It saddens me because I would have considered myself to be a ‘Marvel Guy”. I came of comic age in the 1980’s and grew up on the stylings of Dave Cockrum, John Buscema, John Byrne and the storytelling of Chris Claremont or Jim Starlin and other notable luminaries.

Now I find myself drawn to Marvel films, Marvel television shows more than their comics. I read at least four DC titles to every one Marvel and a combination of three or four Image and IDW titles to one. I find myself less interested in the general goings on in the Marvel Universe to make things worse.

No – it gets worse than that; their cinematics are based on stuff I used to read.

So that leads me to ask the question – are Marvel Comics past their day?

Star Wars is the title I usually pick up and enjoy, but to be frank, I could enjoy Jason Aaron’s exemplary work in Image Comics’ Southern Bastards. The great comics houses used to employ big talents near-exclusively (Claremont, Byrne, etc.) but today’s contracts don’t seem to last as long as the epic-scale runs like Byrne’s Fantastic Four, to cite as an example. Writers (and artists) are lucky if their titles last a couple of years. Who knows how long Jason Aaron will last on even a high-profile title like Star Wars?

DC has re-invented themselves yet again with Rebirth and is elongating the re-introduction to its stable of characters. In this, they can expect to extend the life of some of their heavy hitter titles and characters but also see some ancillary sales with the lesser names. Of course, it also gives a chance for up-and-coming artists to get some exposure with a big house.

I’m looking for Marvel to wow me again; to give me that sense of wonder that I first had when I picked up my first copy of X-Men #124 back in those heady days of my childhood. Of course, they’ll have to contend with my middle-aged cynicism, but who doesn’t like a challenge? 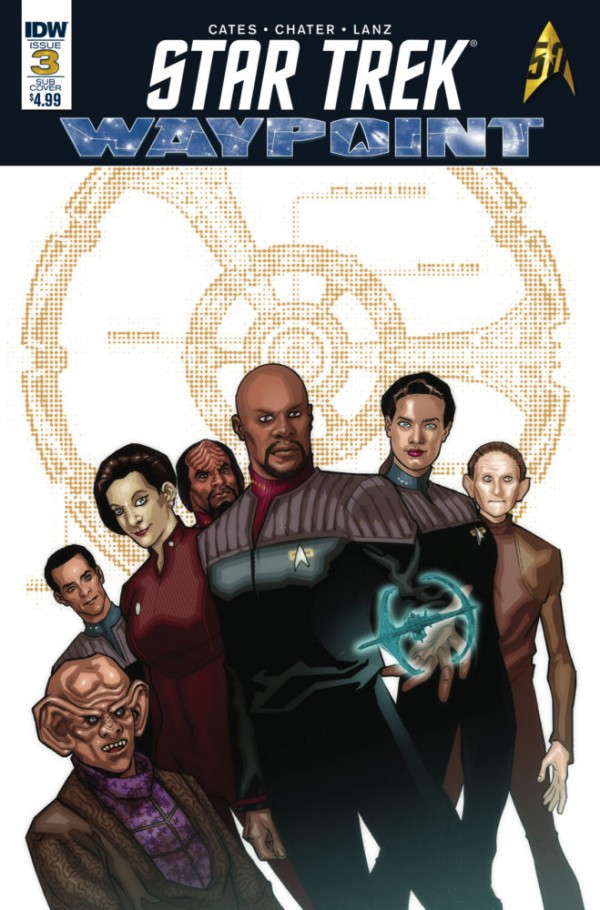 A very simplistic pair of stories in this third issue of IDW’s most recent Star Trek title. I don’t mean to devalue this book with this description; quite the contrary. However, with the glamour and excitement that Star Trek has to offer, it’s quite easy to overlook the human interest side of this environment. After all, Roddenberry meant for the human experience to be transported to the stars in his vision of the future. The human includes stories of loyalty, innocence and friendship. That’s what you find in Mairghread Scott’s The Wildman Maneuver and Cecil Castellucci’s Mother’s Walk.

However, as sweet as these stories were, they didn’t wow me. Waypoint is good, and it’s a welcome addition to the library of Trek books, but it’s still finding its legs. Still, this book introduced me to the artwork of Corin Howell, and I have to say that I enjoyed it. I’ll be sure to keep an eye out for more of her work in the future.

It’s a mesmerizing storyline that exactly fits in the space between history and fantasy. A mix of modern-day storytelling and Early Christianity finding its stride amidst the tattered remnants of the Pagan word. Brian Wood and Garry Brown have a real winner with this book. It takes a great deal of skill to introduce a character like Magnus the Black with a confident manner like we’ve always known him. There is an implied familiarity with Magnus and he is a very relatable hero with flaws and failings that endear him to the reader.

In this issue, Magnus has caught up with Bishop Oakenfort and is still smarting from Julia’s treachery. He has doubt after this betrayal, but the assistance of his companion, Kitta has restored his faith and now he sees the next step of his revenge clearly. 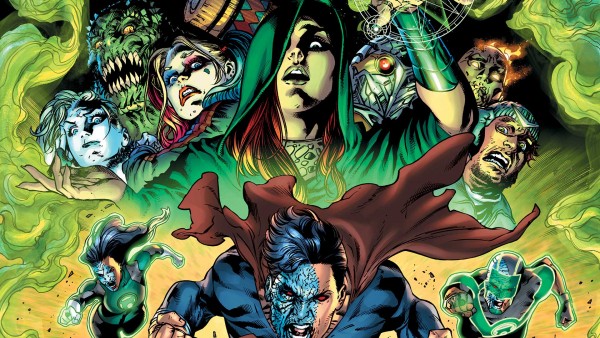 True chaos. The JLA has fallen under the influence of … well, should I reveal? In any event, it took 13 minutes to effectively pacify the United States.

Heh … too bad that didn’t happen before the election.

Joshua Williamson and Robson Rocha have created an extremely effective issue that ties in nicely to the other books in this cross-over event. It takes a lot of coordination and extra-awareness in order to keep this book in line with the other titles and that’s a lot of appreciated effort.

I haven’t seen this villain in a while. It’s a great return to an effective JLA nemesis. Rebirth is definitely doing well for me. 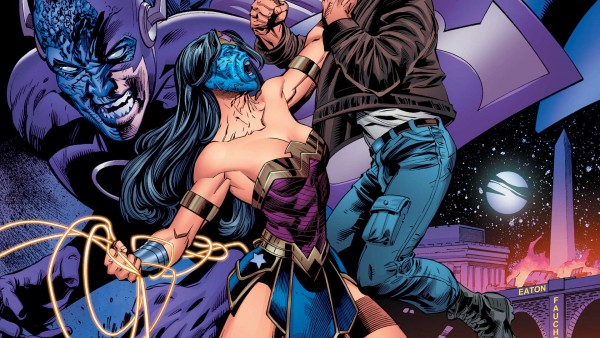 Tim Seeley and Scot Eaton have delivered a very dark rendition of this event. I haven’t enjoyed an issue of this title until now. I really enjoyed seeing the USA fall into chaos but Seeley puts a spin on Eclipso’s ( awww, I gave it away) influence that is just pure shadow. Imagine children arguing over when to eat their mother. Now you have a sense of just where Seeley has taken us.

While the darkness is on the side of restrained, it’s the focus on Steve Trevor that really illustrates the struggle of the light versus the dark. Alone and isolated, it’s up to Trevor to survive and somehow keep the hope alive that somehow, he and the JLA will overcome. But there’s that one scene where he looks up and sees Wonder Woman under Eclipso’s influence and you just know, that at that point, he’s lost all hope.

It’s a very poignant book and it certainly makes the honourable mention for this week’s review.

There’s something very frightening about losing hope. It’s a reality that people face every day in different places in the world. To see it portrayed in this book is a jarring comic reading experience.

The follow-up to last week’s Pick of the Week and sure enough, it makes it again. Rooftops, Part Two is the comic rendering of the morning after. For a few minutes, Bruce Wayne and Selina Kyle allowed themselves a slice of humanity, but for a few pages more of basking in the afterglow of their romance, they’re back to business.

Tom King has really captured the emotional resonance necessary for this romance to happen. It’s a complicated thing: one a crime-fighter with a tortured past, and the other is a tortured soul trying to rationalize ethical decisions with self-interest. It’s a beautiful blending of cryptic personalities trying to solve the mutual problem of relating to each other and for two issues, Tom King manages to make their orbits align and it’s a beautiful thing to see.

I wouldn’t be surprised if this becomes an award-winning script for King.

Mitch Gerads’ pencils really capture the moments too and his work is really suited for King’s story-telling rhythm.

I have to say that while I attribute Snyder and Capullo for bringing me back into the Batman fanscape, it’s King who’s keeping me here. This is a guy who knows characters and his work is keeping me entranced with the Dark Knight.

Yeah, DC Comics is really taking a leading role in wowing me. I enjoy seeing the way these title are evolving for the audience of the 21st century and while I may be a product of the last century, I still need to be impressed too.

DC can do it. Where’s Marvel’s game these days?