More than ever, we look to the items of comfort that tide us through the challenging times. Though we can see the end of these days, I can admit to finally feeling the strain of the last ten or eleven months. Last year, after March, I completely taught from home. This year, I’ve been teaching online since before the Christmas break, and though we have a target date of February 10th for my school board to return to in-school learning, I have now learned to never take these things at face value.

But Comics? Comics, I can trust. So, I am looking to the medium that assuages my worries; the titles that bring me joy. In short, this week I’m looking for what brings me comfort. 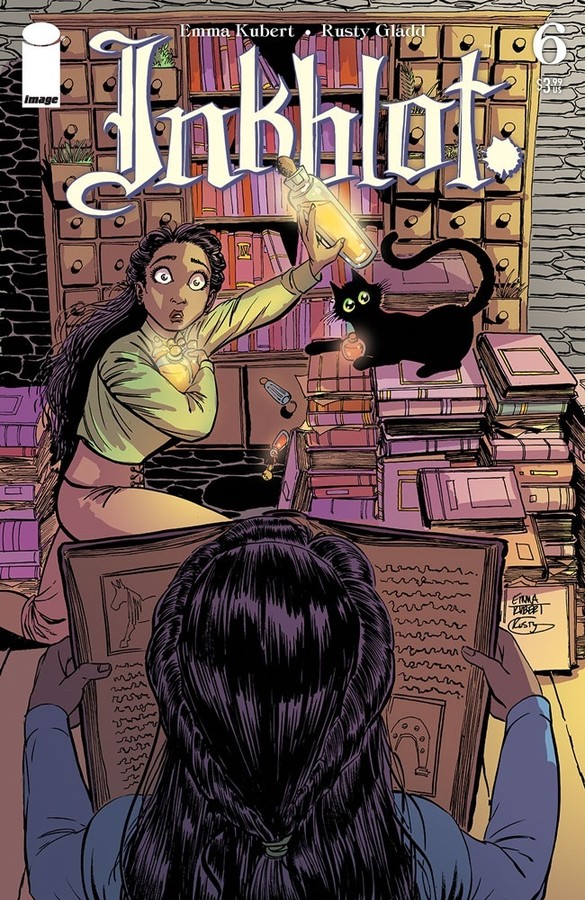 I’m taken by this strange cat.

In a previous review of this book, I’ve said that I’m not enamoured with cats. After all, we have this exceptionally large one in my house who eats, lazes around, makes a mess and expects me to clean it up.

However, she is well-beloved by my wife and two daughters. As such, I then need to step back and see that if they’re happy, then the walking cloud of fur on legs can be welcome in my house as well. It’s an odd thing and hardly a comfort in my universe to welcome something that I clearly dislike, but I understand its place and I guess that does bring me some sense of security.

I think that’s why I like this strange cat in this book. It represents a force of chaos in the Seeker’s life that disrupts her stability, her family’s lives and is a puzzle that she can’t solve. It doesn’t fit anywhere, and it’s the Seeker’s job to discover why.

Gladd and Kubert definitely have an odd vibe to this story, but it has a unique vibe of creativity that stands out. It’s different and though comics can garner a following of people who like the expected types of stories that are out there, it’s stories like this one that remind us of the creative force comic literature can manifest. It’s also a comfort that there are still new things to discover and in this book, the Seeker comes to that conclusion as well.

Like I said, I’m definitely taken by this odd cat. 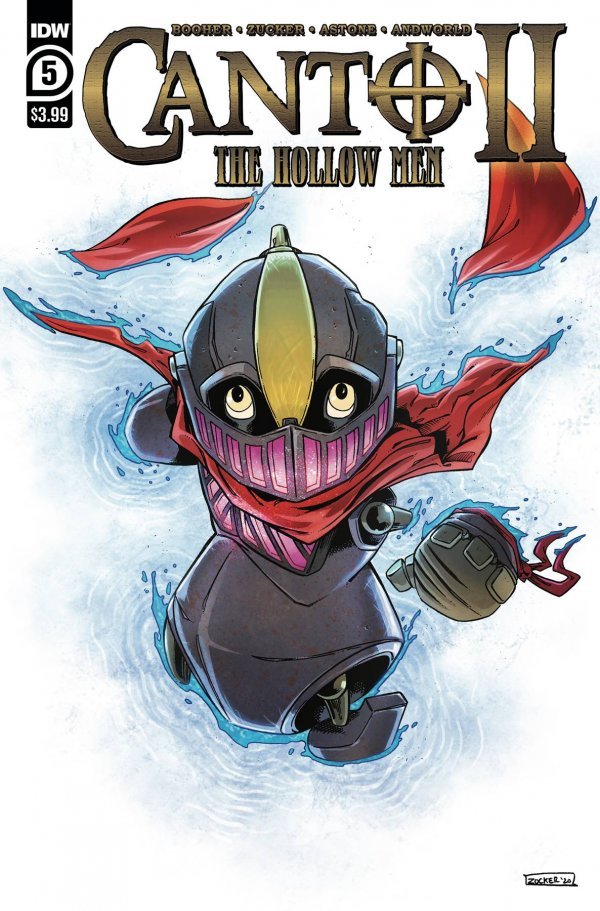 Canto brings such a relief in the form of a hero that we can always rely on, despite his diminutive size. It’s not the size of the warrior that matters, but the size of his heart.

However, in this poignant issue, it’s the heart that’s at question.

Canto has a choice: will he give up his heart to take the Shrouded Man’s and give his people a chance at their freedom? The thing about this description is that we already know the answer to the question. Canto is a true paladin and this type of hero doesn’t shirk away from overwhelming danger.

I’ve stated this before but this little guy is such an example. It takes a special type of courage to measure up to a threat and we need more of this character in real life. I wish I knew what Booher’s motivation was for this hero because it’s too well described to be simply inspiration. Like I tell my students, the best fiction is borne out of facts. There has to be someone in Booher’s life that provided this template and whoever it was, this person was clearly a blessing.

Drew Zucker has fun with this work. He’s an artist who simply loves what he does. It’s present in every frame and in the practice drawings he posts on social media. It’s gratifying to see creators who love their work get love back for their work.

The King in Black: The Black Knight #1 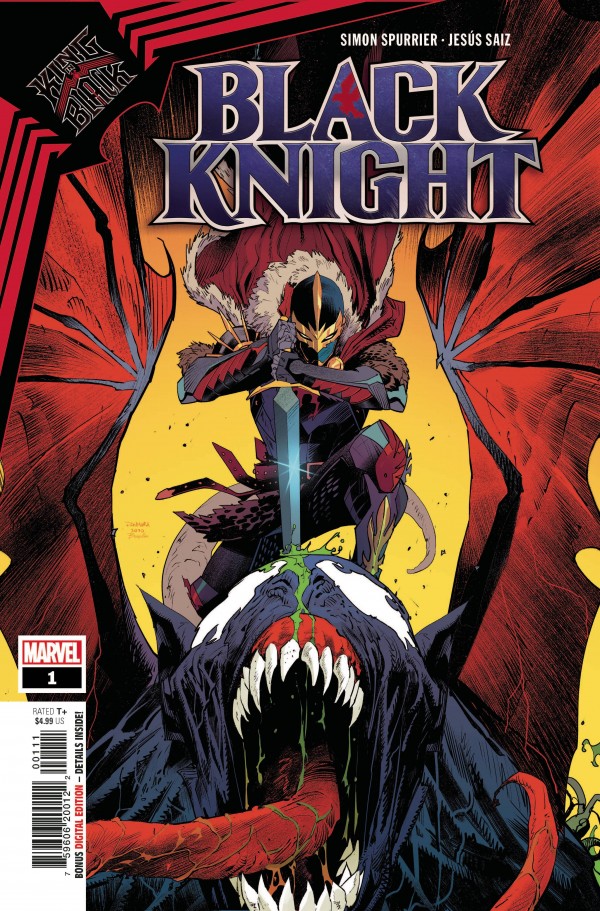 I was always a fan of the Black Knight in the 80’s. This was a character with a pedigree and an origin that spoke to my love of mythology and history. This is a character that not only comforts me but actually gives me a sense of optimism that he can be that character for others.

Tying into “The King in Black” event, Si Spurrier’s Dane Whitman is different from the Black Knight I knew from those days. However, this isn’t a complaint, but more of a nod of admiration. This Black Knight has doubts, even crippling ones about his worthiness to wield the Ebony Blade and live up to the reputation of his illustrious ancestor.

The artwork is definitely gorgeous. What stands out for me is the colouring. It has a particular type of faded quality that evokes a retro vibe, which really works for Dane Whitman’s recollections and visions of his own and family’s past. I’ve seen Saiz’s stuff in the past but this is truly scintillating work.

I enjoyed this book without the barriers of nostalgia getting in the way. I don’t have to like new iterations of favourite characters but I’m glad that I have the open mind to do so. A great story and a lot of relief in knowing that the character and its origins can find a place in modern comic reading! 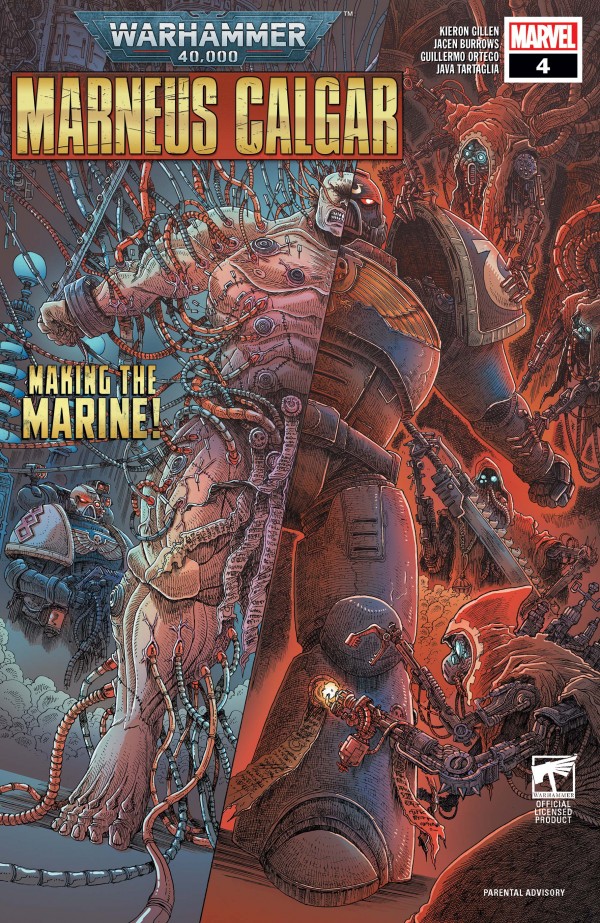 Loved this. Loved my memories of playing Warhammer back in my days of youth. However, as a game that relied upon the collection and maintenance of figures, the chance to celebrate the individual stories was rare in North America, as most stories of the battles of this game were mostly written in the UK, the country of the game’s origin.

However, it’s Kieron Gillen’s mastery of the detailed minutia that amazes me. It’s this aspect that made the game such fun for players and fanboys alike. Each one of the collectible miniatures had a story and if purchased, the time it took to paint and craft the character created a special type of ownership. A player not only knew the statistics of the character but its backstory as well. These special character pieces were valued, more than just their retail price.

Kieron owns Marneus Calgar. There is as much love and devotion put into the storytelling of this character as there is in a Warhammer 40K player’s assembled collection of army figures. I think that resonates with the readers of this book. Marneus’s backstory, the detailed anatomy of the conversion of an aspirant into space marine, and the rugged history of the various planets that serve as battlefields for these epic conflicts. Not only does Gillen own these characters and his past but he owns the battlefields as well. He’s the ultimate Warhammer 40K player.

Of course, augmented by the staggeringly gory work of Jacen Burrows, readers get a visceral sense of the blood spilled on the Warhammer battlefields in this book. I’ve always been afraid of Burrows’ work. No, I mean, it’s fantastic in the purest sense. He has the ability to visualize the scariest of nightmares of any writer and it’s frightening to see the level of detail. This guy’s work stays in your head after reading and that’s real talent.

Note: I need to buy more art from this guy. 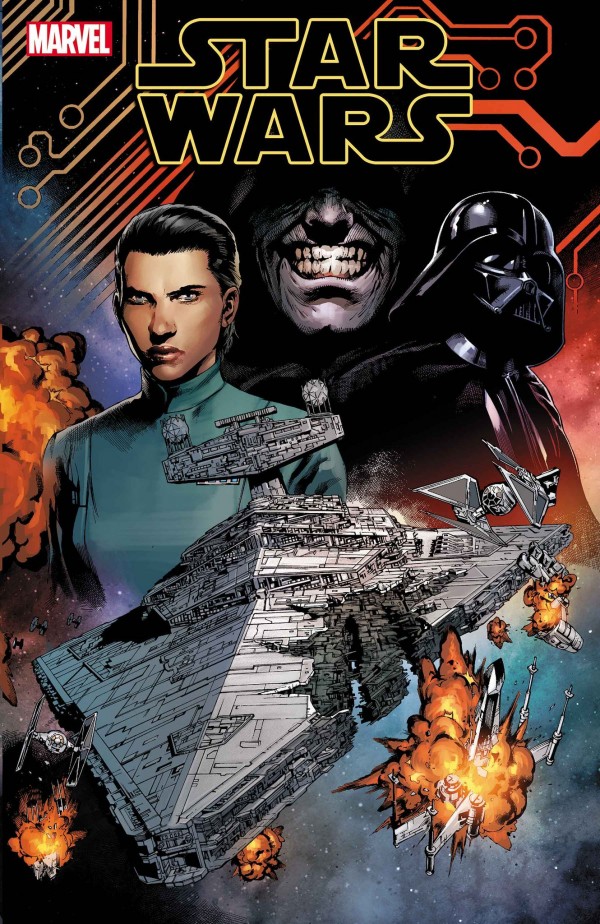 I remember watching Star Wars in the theatre when it was first released. I was a kid, but I was mesmerized by the pace, the action that mirrored the intensity of romance that was present in this film. It was the romantic flair of heroism that allowed me to discover classic films like Errol Flynn’s Captain Blood or Robin Hood.

Star Wars taught me about romantic heroism in storytelling and I don’t think I’ve ever lost that lesson, which is more than a comfort, it’s a passion to be lost in a story.

That’s what Charles Soule has done in this book.

There’s a special type of tempo that’s not only comforting but also somewhat familiar in this book.

This is part of the comfort I’ve been looking for this week. Not only has Soule managed to recapture the pace and the drive of the original Star Wars saga that I remember from the 70’s and 80’s but he has managed to create an original story that brings those heroes back with new counterparts that makes this story exciting for fans old and new alike.

Princess Leia asserts her role as General Organa so clearly as she has to make a hard decision that affects her friends. Lando shows himself to be the conniving scoundrel that we always knew he was, but also connects into Episode VI (The Return of the Jedi) as we see how he was able to gain access to Jabba the Hutt’s palace. The presence of Poe Dameron’s parents also links into Episodes VII, VIII and IX, giving some backstory to his role in those films. Soule has thought of all aspects but the most important is the sense of action, and the schemes, no matter how grandiose they may seem, the speed at which they happen doesn’t give the reader the chance to question how unlikely they may be. That’s Star Wars.

I just have to accept it. Not only does that entertain me, it brings me a sense of comfort – happiness, even, and that’s what I want to read in a comic this week.

Jan Bazaldua’s work gives the reader that same sort of comfort with the degree of realization in the art. Princess Leia isn’t just a princess – she’s a true officer in the Rebel Forces and Bazaldua captures that intensity. It adds to that state of familiarity that Soule has presented in this story and is a perfect compliment to the feeling that I want to achieve in reading this book.

This is where I’ll stop.

Like I said, looking for comfort, and the reassurance that this book is in good hands is a motivator for me to somehow campaign for Charles Soule to remain as writer for this book as long as possible. After all, it takes a steady hand to balance new canon co-existing with the old in a way that doesn’t disturb or supplant the previous work that went before. Soule does that enormously well and it’s such a relief to be able to read one of the fandoms that I love without feeling the schism between the old and new.

That’s a measure of balance, which brings stability. In stability there is comfort. Thanks for balancing the two sides of the Force in this book, Mr. Soule!

See you next time.