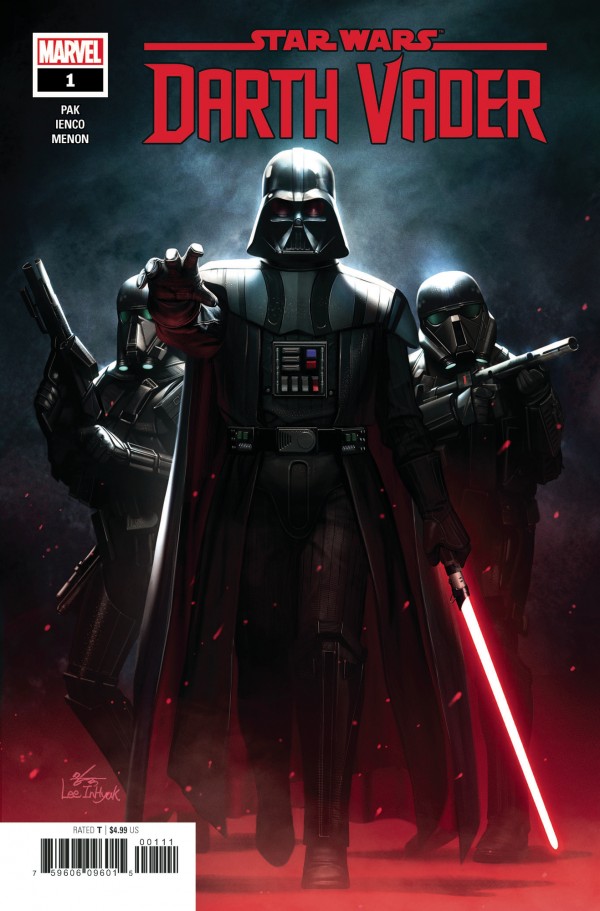 Where there is love, there will always be conflict.

Star Wars: Darth Vader #1 by Greg Pak and Raffaele Ienco is my focus for this week because it’s a stark reminder that even in a place of the greatest evil, love will always find a way to manifest itself and be felt, and in this case, will always be the source of wonder about this fascinating character.

The premise: Darth Vader has revealed to Luke Skywalker that he is his father and this book is about the unknown events that occurred in Vader’s personal life after that revelation.

It’s an excellent area to explore. After all, the films don’t allow for this type of introspective character examination owing to the limitation of film and the fact that comics, novels, and television shows exist to support this franchise for this very reason. It’s these moments that help to cement the franchise together and the space between The Empire Strike Back and The Return of the Jedi allows for excellent storytelling. As a die-hard original Trilogy fan, for me these are the best of the franchise and are the places where we should continue to look for more of these tales.

Pak sends Vader on a hunt for his past. In trying to learn more about the son he didn’t know, he traces his own history in the process, churning up memories, feelings and forgotten love that obviously puts him in conflict with his connection to the Dark Side of the Force. This not only reminds us of Luke’s eventual discovery in Return of the Jedi that Vader still has good in him.

This, of course, why Vader is such a compelling villain. It is not about his capacity to wreak havoc and evil upon his enemies, his significance is about the potential for him to do good. Greg Pak deftly demonstrates Vader’s redemptive qualities by revisiting those moments in his life where we could see his attachment to his mother, a panging for the relatives he never met and the love Anakin Skywalker felt for Padme Amidala. These are important moments that remind us that Vader is not yet fully a creature of the Dark Side and of the conflict that still wages within him.

Emperor Palpatine knows this too. Upon learning of Vader’s disappearance after the Millennium Falcon’s escape, he merely chuckles, knowing full well what his apprentice must be searching for, In two frames, we see that the Emperor knows that Vader’s training is not yet completed until he finally extinguishes the last trace of love he has for his family.

But Luke, in himself, is not just the last hope of the Jedi, he is also Vader’s last hope. This is a theme that I don’t think has received enough attention and it is refreshing to see that Pak has identified that thread and is exploring it with the full consideration it deserves, because in these trying times, we need to be reminded of that even when things seem their darkest, there will always be love. It is a lesson for our daily lives and that is the power of an epic story like Star Wars and an enduring character like Darth Vader.

Raffaele Ienco’s art brings full homage to that notion as well. His work is vibrant and rich with emotional intensity. It gives Vader’s struggle for redemption credence and in intense scenes, shows the tightly bound anger that is pent up inside him exploding in full Dark Side fury. Ienco’s art works.

But I would be remiss to overlook Joe Caramagna’s lettering. I recently chided myself for not giving lettering work enough credit. His sequences with the foreign language of Vader’s Death Trooper retinue definitely adds an extra layer of appreciation for Vader’s authority. The colouring of Neeraj Menon also deserves credit for the extra influence it adds to the emotional intensity of the story.

Flashback to playing Star Wars in my childhood: when my friends wanted to be Luke Skywalker or Han Solo, I always liked being Darth Vader. I always saw Solo and Skywalker as the heroes, only capable of making expected and therefore, boring choices. Vader was a villain, but he always had a choice to either hinder the heroes, or to aid them because he had a secret agenda to follow. He was a character that always fascinated me because of his unknown backstory. He could make or break the game, and that gave him power. Pak is realizing some of my childhood visions and making this character once more, an enigmatic and powerful draw.

But, out of all of Vader’s mystery, the conflict within him will always because of the love.

I have to say that I’ve enjoyed all of Marvel’s recent Star Wars works as of late, and Star Wars: Darth Vader #1 is no exception to this level of expectation and is, the pick of the week.

Until next time, may your week be free of conflict!