The theme is internal conflict and we’re all conflicted in some way, aren’t we?

Those conflicts are probably the strongest and most effective method for a reader to relate to a character. After all, we feel those conflicts within characters viscerally and comics reinforce that with visual storytelling. If the conflict seems real and poignant, and happens to strike the right note, then you have a memorable story indeed. That’s what every writer wants: for you to remember her or his story.

We’re exploring that this week.

… no doubt about it. 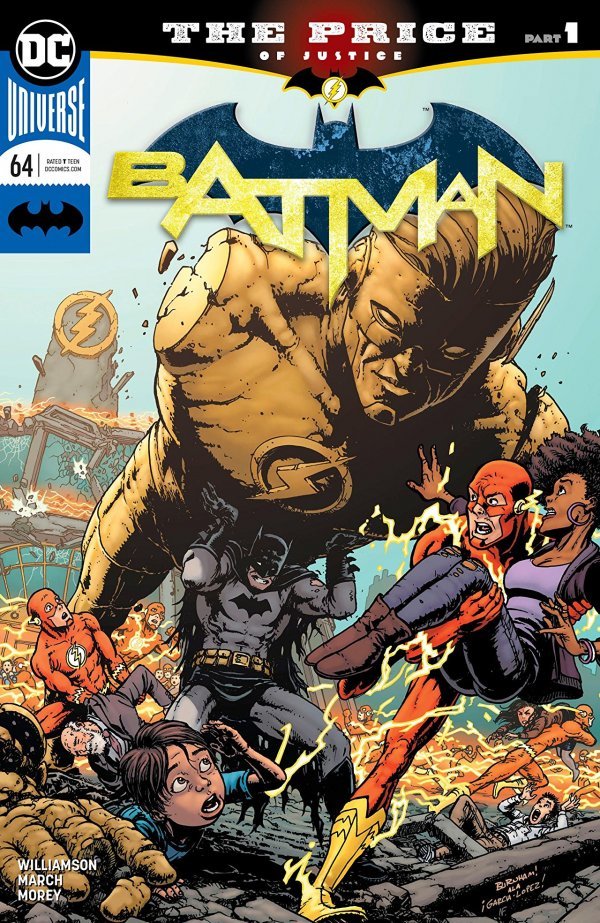 Looks like Tom King is taking a break this month as we interrupt “Knightmares” for a story that takes place before Issue #61 and approximately around the time of Heroes in Crisis. This issue sees the start of a new four-issue arc titled “The Price of Justice” by Joshua Williamson and Guillem March.

There’s a lot of internal conflict in this story, with the Flash’s resentment over Batman’s failure to find Wally West’s killer combined with the sense of guilt.

Many of the symbolic and testimonial places that honour heroes are under attack and the Batman teams up with the Flash once more to find who is responsible for the incidents. In this case, the Flash Museum comes under attack and it’s up to the two intrepid heroes to discover the culprit.

Batman is harboring an over-developed sense of responsibility in this story and it interferes with his job. You know, there are so many things that can distract us from our appointed tasks. They get in the way of our own self-esteem and make us less than we are.

This is true here. It’s hardly a “Brave & Bold” team up; more like “Guilt and Accept”. It’s a lot to accept two heroes resenting each other and themselves as a premise for a team-up. While I can appreciate the conflict in the characters, it’s just difficult for it to inspire more of my curiosity. After all, when you get to the end and see that the discovery of the aforementioned culprit is actually Batman’s fault, the guilt-meter is going off the deep-end and how will the Dark Knight ever recover? 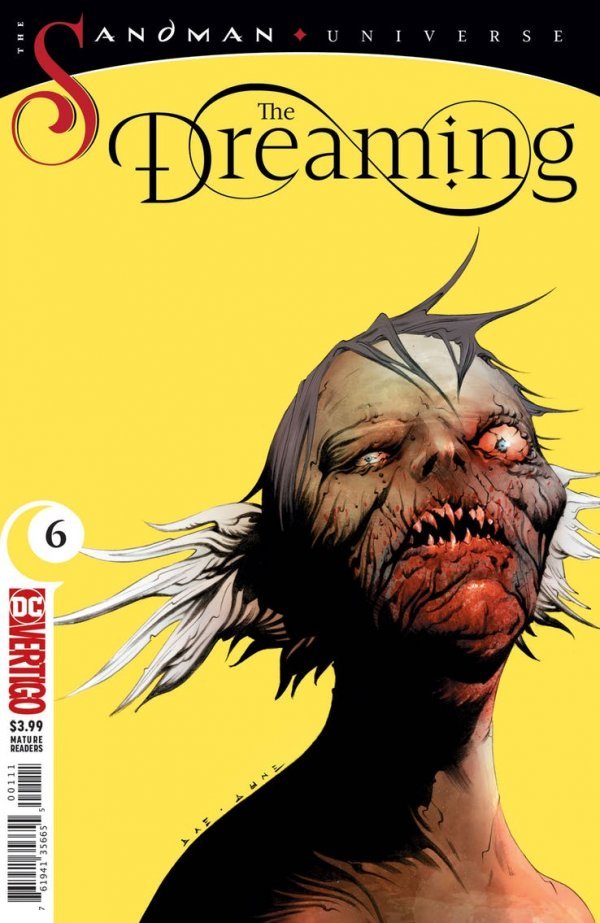 I’m conflicted by this issue, sad to say. On the one hand I have a real respect for Neil Gaiman’s creation and to this point, the way the property has been reverentially cared for. But I have to say, I just couldn’t accept the ending of this particular issue.

Don’t get me wrong; I loved to see the development of Dora into a force of reckoning in this realm. She’s a character who has insecurities and I would love to see her eventually recover her memories and grow into the true steward of the land of dreams. I love that she is able to gather her wits to challenge Judge Gallows, but her identity crisis and lack of self-confidence is an inner conflict that simply seems to much of an obstacle to overcome.

Well, maybe that’s what Si Spurrier wants us to think. I think that Dora is heading for mastery of the realm and instead of seeing Lord Morpheus, we are going to see Lady Morpheus.

But until then … the prime obstacle in her way is her lack of self-esteem. Yet, there is a moment in this book – and you’ll see what I mean – when she accepts her misgivings and manages to accept that she needs help.

I’m not a guy who asks for help; like most of us who were raised with the “stiff upper lip” mentality, I like to avoid problems and retreat into my shell. I don’t know if it’s the healthiest thing to do, but I know that Dora manages to see a little success through her admittance.

Bilquis Evely is an entrancing artist. Her work was meant for the metaphysical. Spurrier manages to carry the existential type of lingo in a masterful manner. I never have issues with the quality of their work, but I think a part of me was expecting to see the original Morpheus return and save the day. However, I don’t think that’s in the cards and hence, my conflict. 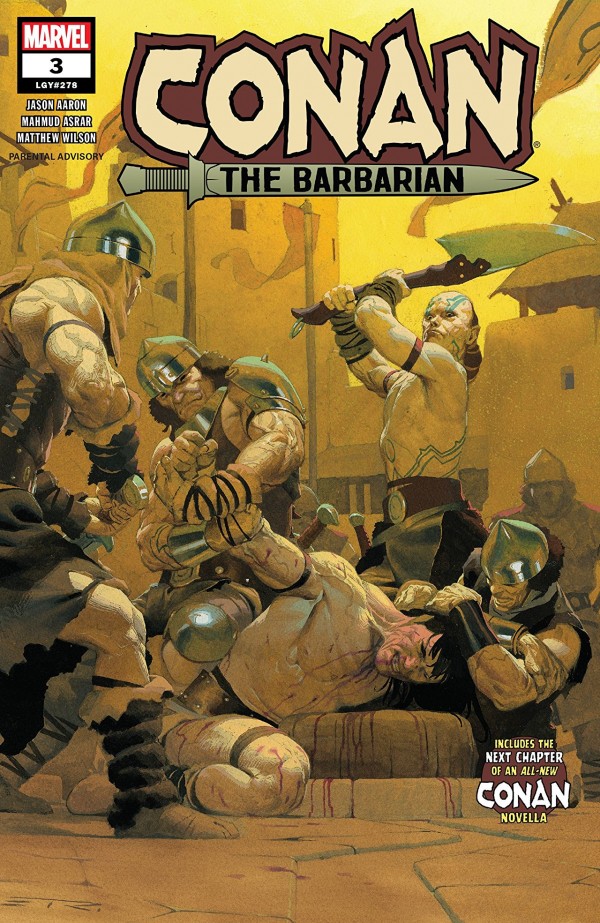 Oh my God … the pulp is strong with Jason Aaron.

Any story with Conan is a conflict-driven one, with tests of steel, guile and glorious rewards! It’s the quintessential fantasy story in which a reader’s dreams of adventure are realized … in blood!

See what it’s doing to me? I know Jason Aaron is a talented writer but to see him in this genre is just pure fun. I’m sure he’s loving the challenge too, though I doubt it’s much of a challenge. However, he has managed to capture the vibe of Robert E. Howard’s classic warrior. It’s a complete vicarious thrill to see Conan in his element.

Conan is a thrilling character because of the danger, the excitement and his inherent confidence that he will win any conflict. Whether it’s by brute strength, skill at arms or just plain luck, there is nothing that this barbarian believes he can lose.

In this story, Conan has been taken prisoner in a failed attempt at thievery. Yet despite the odds, Conan manages to give a good account of himself. He has no allies here, only some act divine providence can save him. But, Crom is a lazy, recalcitrant god. Will he listen?

Jason Aaron must get a kick out of writing such gritty prose. It’s earthy and visceral and has a drama to it that throws the reader right into the conflict. Mahmud Asrar does a great job in realizing the Cimmerian thief. It’s just a joy and no conflict in enjoying this book, that’s for sure. 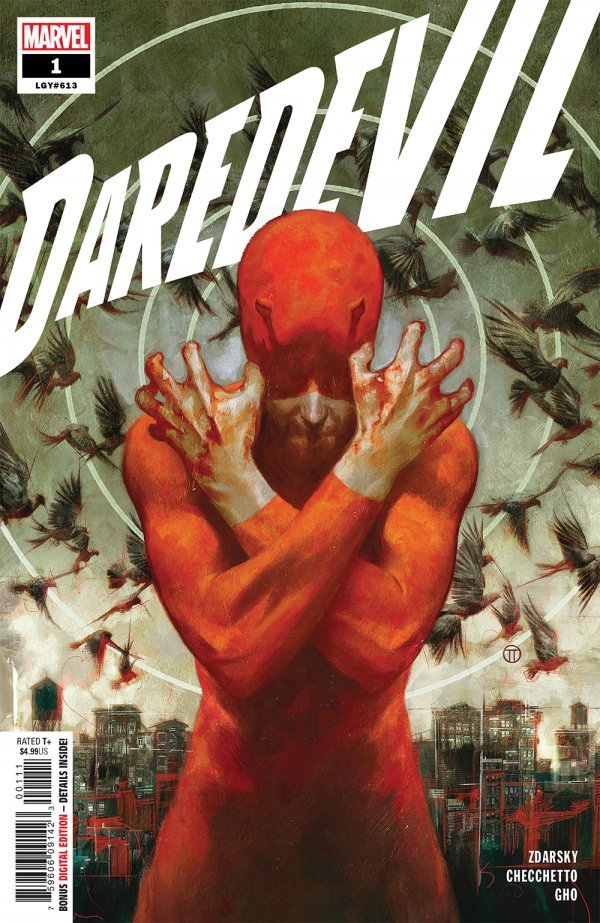 Chip Zdarsky gives us a look at a Daredevil who finally fears fear … and if that isn’t a conflict, I don’t know what is.

After recovering from near death, the conflict that Matt Murdoch has to reconcile in this story is to simply overcome the fear of being who he once was. Even though Daredevil’s moniker is “the Man with No Fear”, that isn’t entirely accurate. Daredevil knew fear like a friend, with all of its limits, habits and more importantly, what it could do to him. But Matt Murdoch, after being caged in a hospital room, has been betrayed and abandoned by fear and now only knows him as an enemy.

Fear is a motivator in that it can teach us to ignore conflicts and limitations. If we are unable to serve a greater desire or what we know to be good, then we are nothing. Daredevil is nothing with fear no longer pushing him to reach that greater good.

There’s a lot of thought and spirituality in this story. While Daredevil’s Catholicism has always been a strong theme, it has acted as an ethical measure for Matt Murdoch to either justify his actions or to act as his conscience and check them. In this case, it’s a barrier to contain his fear. While Catholicism may have a bad rap for dogmatic adherence to the faith, Zdarsky’s take on it is to allow Murdoch – and the reader – to consider if becoming Daredevil is the right choice.

There’s a wonderful parallel in the story. In the beginning (if you’ll pardon the expression given the context), Matt Murdoch takes comfort in the carnal comfort of the one-night stand. Yet, later on, we see accessing the spiritual counsel of a long-serving family priest. In one of these moments of advice, the priest reminds Murdoch that “we walk in two kingdoms”. One is of God and one is of man and in man’s world, one is expected to follow the laws of man.

When Murdoch becomes Daredevil, he is pursuing a higher good, and one can could ask if he is in the service of God in doing so. There’s a great deal of conflict in this book and could it be that the source of fear is the thought that God has finally abandoned him?

This was a great issue from Zdarsky, whose name always offers me a moment of fear as I feel like I’m blindly arranging consonants. Marco Checchetto’s art is a dynamic battle between light and shadow; the external conflict mirroring the internal one felt by Murdoch. Sunny Gho’s colours definitely need some love here as well.

When conflict happens internally, externally and on a higher plane of spiritual reasoning, then there’s no doubt that this is the comic pick for this week’s run.

We fear success. We fear the barriers to our success and the impediments in our way that we need to overcome to achieve that success. Therein lies the real fear and Zdarsky has our attention with a hero who can’t even overcome three small-time robbers in his neighbourhood.

There’s no forgetting this story, that’s for sure. When we see a hero conflicted by the notion of being what he was again, it’s easy for us to relate and understand his quandary because we all struggle between being what we want to be and what we are.

That’s it for this week. May you overcome all your upcoming conflicts and realize victory in a truly heroic manner!

Pick of the Week: Daredevil #1