It’s independence week for me this time around! I love stories with an individual hero/villain breaking ground and proving their worth, but gotta be true to myself.

You see, lucky for me, I get sent a wide array of comics to preview, and to be honest, it’s such a massively wide spectrum for me to wade, that really it comes down to what is affecting my mood in a given week. As an independent reviewer, I’m lucky that I’m able to review comics without bias or motive. I know what I like and I like what I write about.

That’s why I’m going to look at exclusively take a look at Aftershock Comics’ Scout’s Honor #1 & #2 this week as my first troth. Seriously I feel wholly guilty that I didn’t look at this book last week because what an amazing storyline.

I’m a sucker for post-apocalyptic premises. I think it’s a function of being a 1980’s teen when you were asked in your English class in high school if you thought you were going to experience a nuclear attack in your lifetime. I remember at least 80% of my grade nine class put up their hands. I think I was the only one who didn’t because (and this was my teenage mind thinking) that it was just something that only cool sci-fi stories could come out of.

True story – ask anyone who was there.

However, I think that expresses not only my adolescent, root understanding of the basic nature of man, but that it also showed my ability to acclimatize current events to popculture understanding. Quite frankly, I think my understanding with comic storylines made me better to accept current events and deal with them in a rational manner. 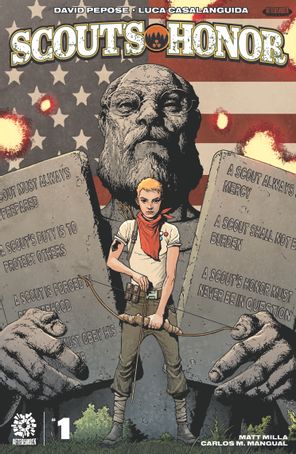 Created by the team of David Pepose and Lucas Casalanguida, here’s the description from their own press release:

“SCOUT’S HONOR follows a cult that has risen from the ashes of a nuclear war… and their bible is an old Boy Scout manual. Our story centers on Kit, a young Ranger Scout who’s had to conceal her identity as a woman in order to serve in this hypermasculine survivalist cult — and as you’ll see in our second issue, she’ll have a dangerous road ahead of her after she discovers her way of life was built on a lie.”

It’s simple and straightforward but has a flair to it that hearkens back to the post-apocalyptic stories that I loved. Books like the Slash Maraud mini-series Doug Moench and Paul Gulacy or Sabre by Don McGregor and again, Paul Gulacy. Those books paved the way for stories like Jonathan Hickman and Nick Dragotta’s East of West or Garth Ennis’s Crossed with Jacen Burrows.

Scout’s Honor has a classic, retro feel to it. With its emphasis on male primacy, it gives me the sense that the great disaster that the world experienced was set some time in the 80’s, which is an automatic win in my book and I think it’s a book a lot of other comic readers in my demographic would immediately grasp as well.

Remember the old role playing game, Gamma World? If you do, then you’ll love this story.

I enjoy the spontaneous feel of a simple premise. The fact that an entire cult could spring up from the teachings of a Boy Scout manual is so ridiculously simple that its acceptability actually makes it a more believable story. The willing suspension of disbelief isn’t too much of a demand and that ease of acceptance frees us up to enjoy the dynamics of the characters, the sights and features of the strange new world that has emerged out of the nuclear ruin, and fills the reader with a desire to explore more of it.

Casalanguida’s art is new to me, so that’s an additional joy in reading these two issues. New, good art is always fun to see, especially in a story that entertains me. It’s gritty, emotionally dark and fits the story well. This world is shattered and Casalanguida’s art perfectly captures that dimension. 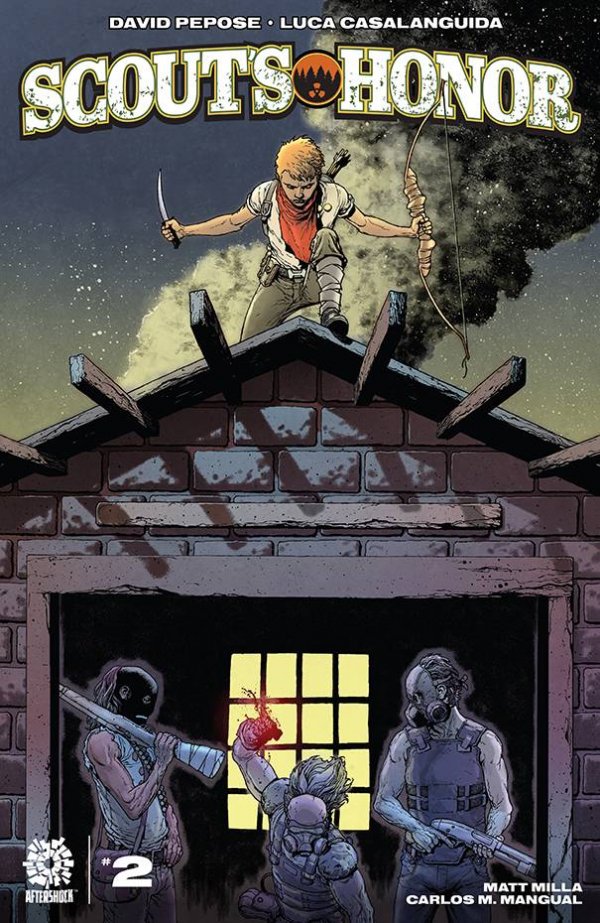 This is an independent comic. Like I said, I admire the spirit of heroes who break ground and come into their own, but I also have to say that I like creators who manage to do the same thing. We need to support more of that. It’s a big market and there are lots of stories out there. This is an example of the emergence of an independent great story and I was glad to see it from the beginning.

This is the first time I’ve reviewed a book from Aftershock and if there are more like this one, then I’ll definitely be interested in taking a look at more.

Scout’s Honor #2 is on sale tomorrow. Be independent and give it a go.

Pick of the Week: Scout’s Honor #2