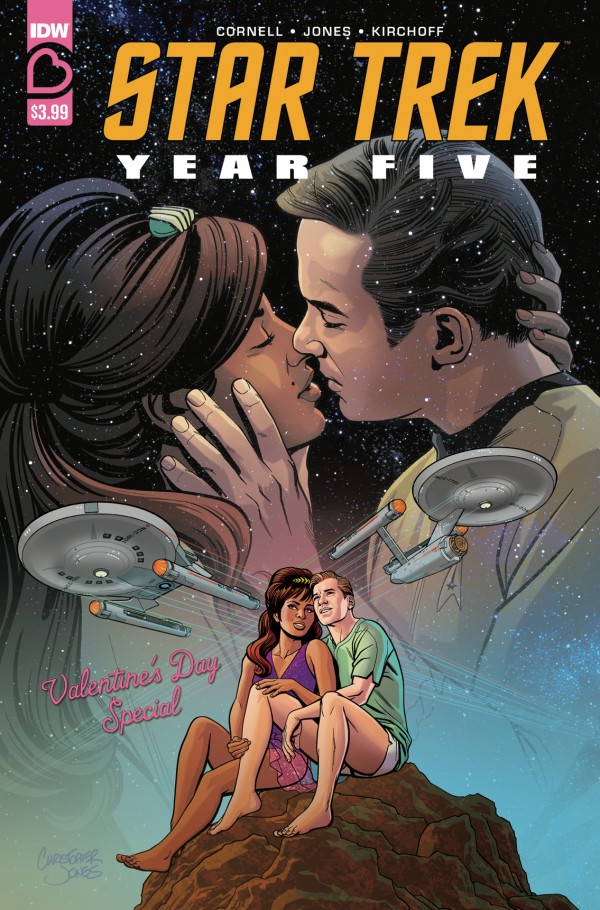 The complex nature of James T. Kirk’s personal relationships has always been a subject of fascination to me. The way Kirk pursues his love-life has always been in direct opposition to the way that he tracked his career. In his captaincy, Kirk has always been decisive, confident and trusted his instincts in a manner that made him stand out, but his relationships with women? Well, that’s a completely different story.

Paul Cornell’s and Christopher Jones’ Valentine’s Day special edition of Star Trek: Year Five, titled Captains of Sea and War is one of the most enjoyable stand-alone issues I’ve read in this series. Not only does it tie into classic Naval warfare history, a poignant Kirk romance, close friendships, starship combat – this has everything you could ever love about James T. Kirk. I’m sure William Shatner would approve.

I have really enjoyed this series because it looks at a critical point in the careers and lives of all the officers and crew of the USS Enterprise. Not only do they have the distinction on serving on board one of the most memorable missions in StarFleet history, but they are also seasoned veterans who have a degree of unparalleled experience in space. It’s a pivot point for many of them, especially James T. Kirk as he begins to make the transition from Captain to Admiral – and the life choices that lay ahead of him.

In this issue, Kirk is on shore leave and meets fellow Captain, Laura Rhone. The attraction is instant. Hell, I was attracted to Laura Rhone from the moment she sat down at Kirk’s table and announced that she liked to “go at her objectives, Like Lord Nelson.” Any beautiful and accomplished woman like Captain Rhone with a knowledge of naval warfare history and tactics is definitely a winner in my book and hard to resist. The fact that there is a definite resemblance to a 1970’s era Pam Grier adds to my enjoyment of this adventure!

Kirk has always had an attraction to direct women. They seem to put him off balance, make him react in stead of respond. Women like Edith Keeler or Miramanee who knew their minds and what they wanted seemed to be the ones who held his heart the most. Instead of directing them, as he does his crew, he prefers to be directed. The ones who can do that well are the ones who will seize his interest.

Laura Rhone does that from the first time we meet her. They begin a whirlwind courtship of intense togetherness that culminates with Rhone proposing to Kirk. What’s best about this part of the story is the chance it gives for us to see the relationship Kirk has with his closest friends, Spock and McCoy. He seeks out their guidance in deciding what the answer should be and they give him sage counsel. Finally, he decides, and it is completely the decision we would expect from James T. Kirk.

Flash forward to ten years later. Kirk is an admiral and must give an order that is sure to send Laura Rhone to her death. A mini-singularity has opened and an anti-matter explosion can halt the singularity form growing. She accepts the order and just like that, she, and he ship, the USS Drake, is gone.

… Only to reappear fifteen years later. She and her ship have returned from being thrown half way across the galaxy. After her experiences, they reconnect and decide to explore the status of their relationship with each other.

It’s a perfect love story completely appropriate for IDW’s Valentine’s Week issues. After all, when we think romantic Starship captain, you can’t write a story like this without Kirk. While he is a philanderer, a “ladies’ man”, if you like, there is also a great deal of hesitancy and vulnerability when he does settle into a serious relationship and I completely respect Cornell in his decision to tackle a story like this. It’s daring and shows Kirk in a way that always provides for a Star Trek story that has a classic vibe to it, which is, of course, what Trek fans want when reading a story from this era.

I have to give full respect to Christopher Jones’ art. Good likeness work is essential for franchise fiction and Jones succeeds admirably in this regard. But, I like his work in setting a scene more. His character positioning in proximity to each other, action, etc. For instance, the montage of Rhone and Kirk’s outings, the depiction of their shared interests not only highlights the main theme of the story so admirably, but it also intensifies my appreciation and yes, approval of the relationship. In fact, I think Laura Rhone should be an added canonical character to the lists for sure.

If you add Neil Uyetake’s spot-on lettering and the perfect palette of colours from Charlie Kirchoff, you have an wonderfully rendered cornucopia of visual delights that will be sure to please any lover of a classic Star Trek love story. This story is a winner and it’s certainly my pick of the week for this week’s review.

Like I said, Kirk is my literature hero – always has been and always will be. Seeing his vulnerable side and him in a relationship that impacts on a fateful time in his career? Well, this is the complex and introspective side of Kirk that has always fascinates me. The added enjoyment of this being one of the Valentine’s Day specials from IDW makes it a really special and appropriate read.

I have to commend IDW for their treatment of the Star Trek franchise. Not only is it respectful of the history but it also dares to explore those ideals and philosophies that have set Star Trek apart from other science fictions. I’ve covered IDW’s efforts fairly closely in my own five-year mission and I must say, it’s always been a pleasure.

For now, may your Valentine’s Week prove to be as fascinating and daring as you explore your own … final frontiers! Until next week!