Happy Valentine’s Day! While, I should be looking for the comics that exemplify the romantic nature of love, instead, I’m looking for another form of comfort in the form of stress relief.

Why do I find comics such a stress-reliever? That’s simple: Series of fantasies, not unlike soap operas in which heroes and villains are matched up against each other in a struggle to prove that right shall prevail, honesty is a virtue and that in the end, good shall triumph. Writers may disguise Good in various forms: anti-heroes, sacrifices for the greater good, or the adoption of the tactics of the enemy in order to win a desperate war. All of these still mean that the Good is observed and secured in some way.

I need to believe in the Good. That’s why comics are necessary in my life. The world is an infinitely better place because these stories exist.

Let’s get to the list and see what Good there is this week. 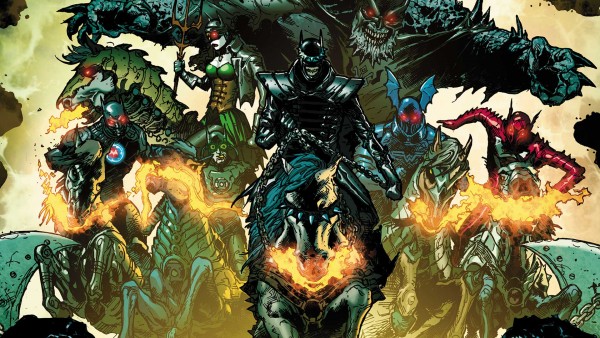 This is worthy of notice. I love how Scott Snyder takes a seemingly innocuous character like Bobo, the Detective Chimp and makes him applicable in a multiverse of capes and powers. A life of abuse and torment is made relevant and useful by the kindness of an under-appreciated and likewise seemingly innocuous person and this gives the Detective Chimp his raison d’etre for seeing the interconnectedness of things – and the ability to know when something isn’t right.

I love the start to this issue. The feels, people.

Grant Morrison and Scott Snyder working together on a piece is like an atomic warhead containing both interdimensional awareness and emotional resonance. Both of these writers are using their strengths to influence the other and it’s a tale that makes complete sense, despite its location in the interdimensional nexus known as “The Bleed”. There’s a lot of fun in this book and despite the stress of the stakes at play, seeing how hope can keep one going is something to watch and enjoy. 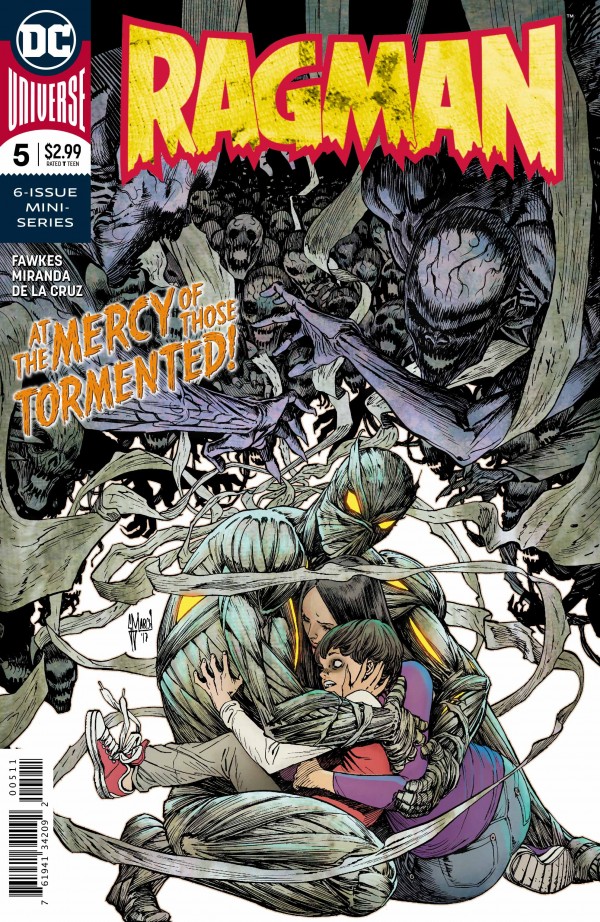 Ray Fawkes has crafted this tale of honour beyond the grave and in fact, the danger of dealing with demons.

Yeah – you’d never think that was a life skill to master, right?

I have to say, it seems like this has be prematurely halted. This is issue #5 of 6, but while I love stories about making deals with the infernal realm, it’ll be a better story if our young Rory learns how to handle both Etrigan and his latest villain while maintaining his loyalty to his dead comrades who the Ragman costume has entrapped.

I don’t think I’d like to be entrusted with someone’s soul but it seems to me that is the measure of Good in this book. What is the ultimate limit you’d push yourself with a friend’s valuables? Well, if you’re a decent person, you’ll take good care of them, – unless you have a greater Good in mind – and I am definitely curious how young Rory is going to get himself out of this one.

I think I’d enjoy this more knowing it was a continuing series. 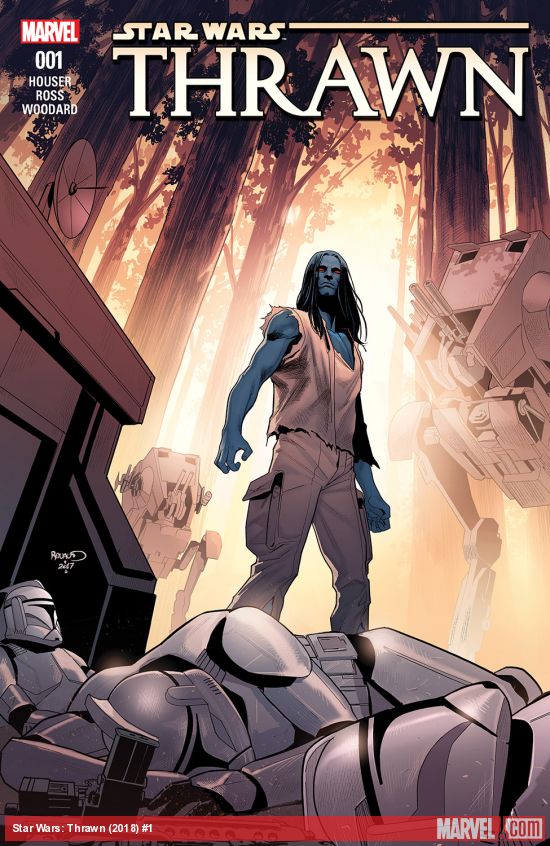 I have never loved a villain so much as Timothy Zahn’s Admiral Thrawn, and this insightful rendering from Jody Houser and Luke Ross into his origins is most certainly something that I could not afford to let pass me by.

Damn … Houser’s Thrawn will make you lose all faith in what Good can be done when presented with such a masterful schemer! It is a fascinating study to see how this alien military genius got the attention of the Emperor and eventually rose through the ranks to become the Grand Admiral and delicious villain of Zahn’s books.

This is how you add to the veracity and enjoyment of canon, people. Additions should never seek to supplant previously established works, only make them better and that’s what Thrawn does. Though he is a Grand Admiral, he is still subservient to the whims of both the Emperor and Darth Vader. In this case, having Thrawn’s origin story explained certainly cements that principle and makes this probably the best Star Wars story I’ve read in a long time. If you’re a fan – buy it. 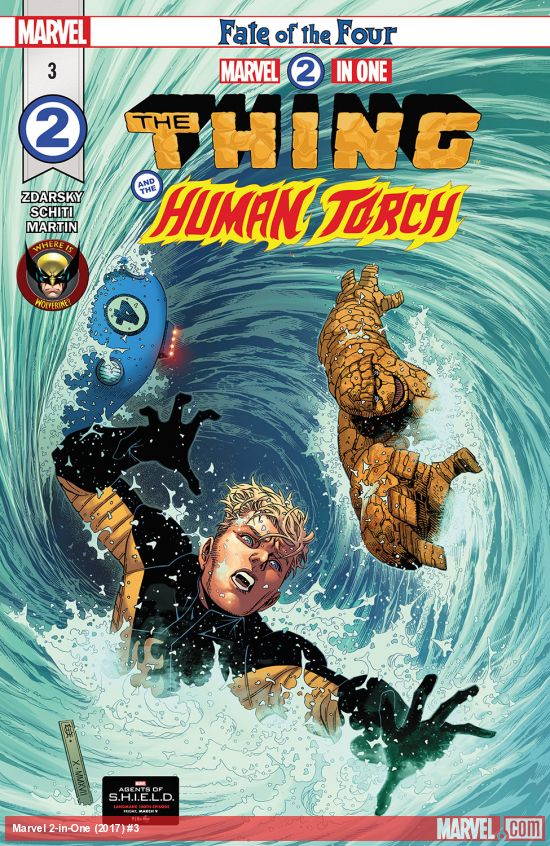 How stressful can it be when your loved ones are presumed dead? What I took for a quick one-shot has emerged into a compelling story arc written by fellow Torontonian, Chip Zdarsky. I find I truly empathize for both the slowly de-powering Human Torch and the Thing. In fact, Zdarsky has gifted both these characters with new emotional ranges. Johnny Storm is more reflective, though still possessed of his hallmark impulsiveness, while Ben Grimm is more openly caring and altruistic than in previous portrayals. I am given to enjoying Zdarsky’s interpretations of these characters more than I realized.

I don’t know Valerio Schiti’s art, but I have to say, I quite enjoyed it in the continuation of this story. It had a quality that matched the emotional resonance of the story that I couldn’t identify yet still managed to appreciate. Perhaps someone with better skill than me can identify it for me, but I enjoyed it nonetheless. 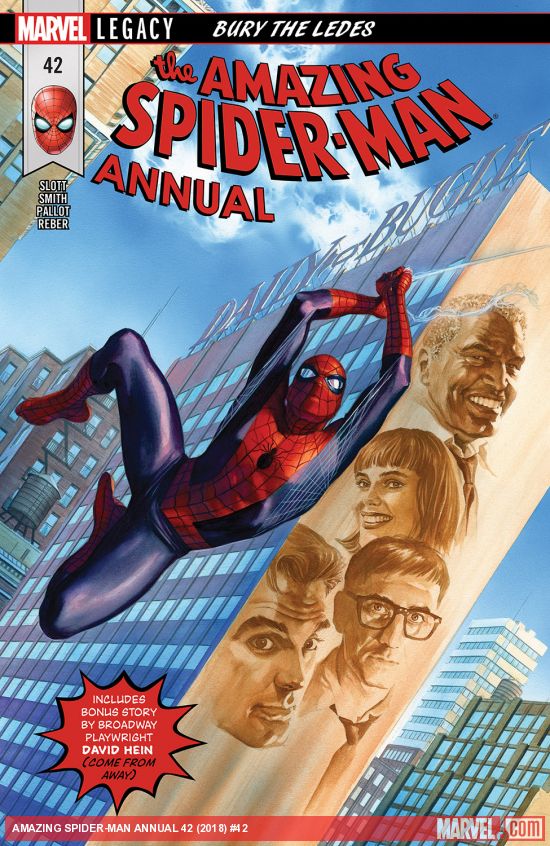 Accept no substitutes, when there’s a danger, call the Spider-Man!

Dan Slott is a very caring guy. I’ve met him, chatted with him backstage, and, deeming myself a good judge of character, he’s the type of guy you could hang out with and know that he has his friends’ backs.

This is the type of guy who could write a story in which you see the Good prevail.

There’s nothing bad in this story. I’ve always enjoyed the maxim: “What Would Peter Parker Do?” and, there were former friends of mine who I felt lived by that as well, I find that I actually do question my motives and those of my friends by that standard.

Dan Slott has to live it as a professional.

The thing is, after you meet the guy, you know that it’s not just a job – it’s part of him. That comes out in the writing and I found myself drawn to this particular issue as Spider-Man watches over Betty, honours the memory of his friend, fulfills his own professional obligations at the Daily Bugle and is just one damn fine friend.

It’s a typical Spider-Man story: a problem with a co-worker at the Bugle which necessitates Peter Parker to involve himself in order to bring out Spider-Man later. The Undermob, a mysterious Civil War statue and the belief that Betty Leeds has that her husband, Ned, is still able to contact her from beyond the grace. While Spider-Man knows the truth, he still feels an obligation to keep his friend safe.

Slott has brought Peter Parker back to his original roots and that’s something that’s not only hard to ignore but something to indulge in after a hard week. There’s such a major comfort in knowing that your heroes can continue to act in reliable and consistent manner, because in order to combat stress in our lives we need to know that some things will never change. Whether this is the constancy of friends, the love of family or the simple value of professionalism, the struggle is worth the stress.

Thank you, Dan, for reminding us that sometimes the best way to deal with the challenges in our lives is to think about what makes the Good so important in our lives. The Amazing Spider-Man Annual #42 is the pick of the week.

Pick of the Week: The Amazing Spider-Man Annual #42