the influence of the 70’s four-colour heroes is a power that instilled a genuine sense of the power of justice in a lot of people my age who grew up reading them. There was nothing a true crusader borne of the spot-colour process couldn’t do. They could absorb damage, push past their own limitations and show us what a true hero was capable of, and with the right determination of our own, how we could be like them.

In those comics, the hero always won, when confronted with opposition greater than their own, but should they ever lose, it was a time of great revelation and an opportunity for them to grow … and be stronger.

I miss those days, so that’s what I’m looking for in this week’s comic run. So, let’s get to the list. 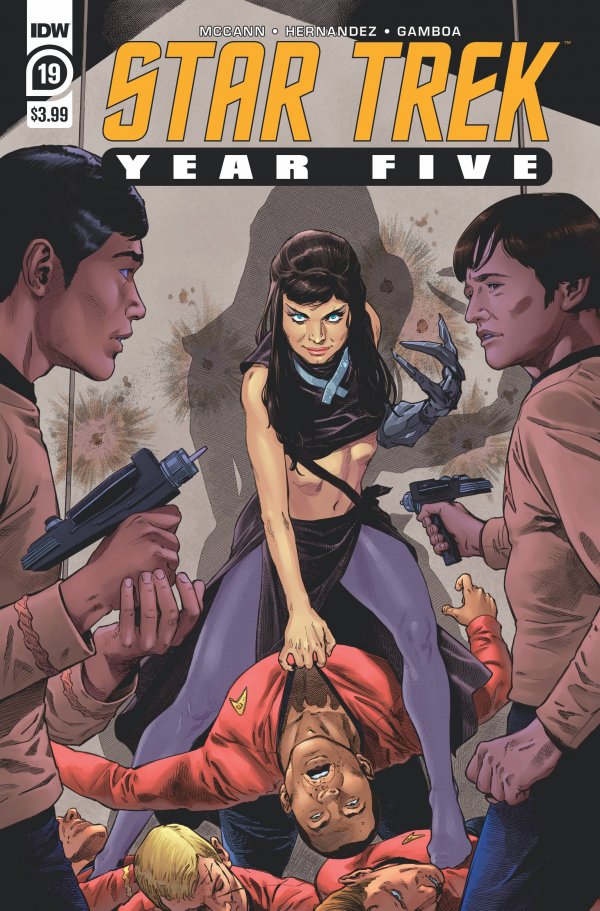 In this book, we see a return to the greatness that was the original Star Trek series. The crew of this gallant ship all had a role to play and they were each specialists in their own fields. Sulu was a gifted helmsman, Uhura could translate and communicate with alien species; Spock was a bastion of reason and logic while Dr. McCoy was an insightful healer unafraid to risk his own life to save another’s. Scotty? Don’t get me started about a fellow clansman who was probably the inspiration for the McGyvers who would come after him. But, led by Captain James T. Kirk who placed his ideals alongside with his daring – it was the stuff of legends – and in this case, Jim McCann and Angel Hernandez, under the showrunning guidance of Jackson Lanzing and Collin Kelly, have returned us to that sense of adventure.

I’ve been a sucker for this series because there has been that return vibe to the 60’s era of Trek, but it has had poignant features of a future that this current century can relate to. In short, it’s a revisit to a series that could actually fit into the current Trek milieu. John Byrne managed the same sort of feat with his Star Trek: New Visions series and this is a tasting of the same vintage.

I will also flagrantly admit that I completely adore the character of Isis. She’s a 1960’s character who we knew nothing of – and I love the way that she has been developed in this series.

This issue though, it’s Dr. McCoy who shines, not only with his medical skill but with his willingness to give of himself. It’s the type of heroism that doesn’t seem to be valued. It’s still here, in our world, but the fact that Bones can sacrifice some portion of himself, risking mortal danger, can still make the difference. Making a difference matters in this book and that’s a value I can appreciate.

Sulu, Chekov show their friendship to be their strength and the sub-plot with the battle with Gary Seven’s aide-de-camp, Isis, makes this a true Trekkie’s dream come true: a return to the original heart of Star Trek. Angel Hernadez’s work acquits itself most honorably – yet again – and Jim McCann should be applauded for capturing those character attributes that matter the most to Trek fans, regardless of their generation. 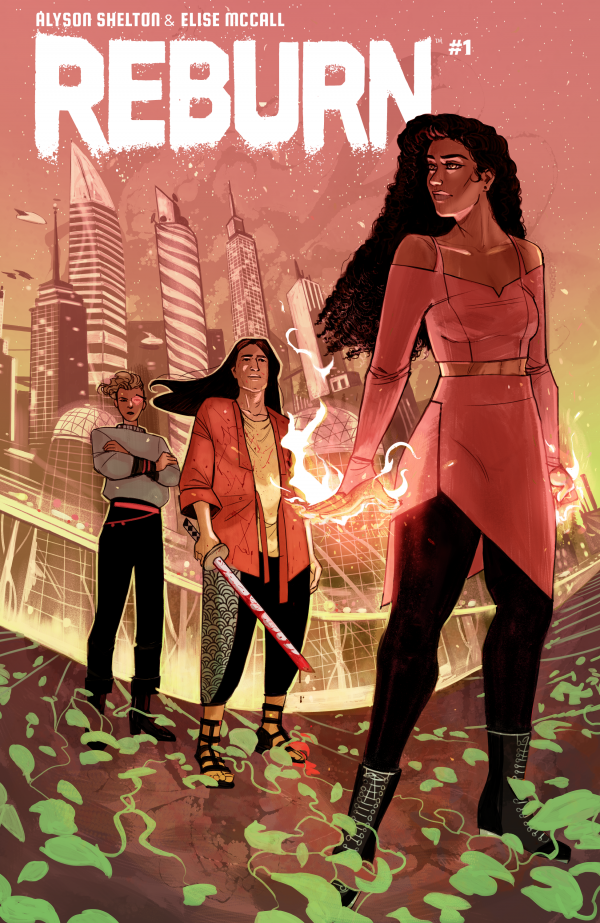 This is the variant cover for the first issue of Reburn. I haven’t had the full extent of this comic. In fact, I’ve only had the first eight pages, which is enough for a teaser but not enough for a full evaluation of the story. But what I like about what I’ve been given so far is the throwback to the post-apocalyptic storyline that, if you remember from what I wrote last week, is certainly within the vibe that I can appreciate from the nostalgic perspective that I’m leaning to right now.

I like it because it evinces a strong female lead, and I don’t think it’s a “progressive” perspective to state that this is a thing that people should look for in comics, it’s a thing that they should naturally appreciate. I mean, hell, I married a woman. I wanted the mother of my children to be someone they needed to respect because she made the decision to bring them into the world. My wife is my queen … and her daughters need to respect that.

In what I’ve seen so far, we see May, the leader of a revolution being thrust into a wartime situation that she never expected. It’s one of those typical hero-origin stories that we definitely need to see more of. It’s going to be set up under a kickstarter and here’s the link if you’d like to learn more:

When the full issue is released, I’ll be bound to cover more. Based on what I’ve seen, I’d definitely like to see more because it captures that vibe of strong, female heroes that I’ve grown up with in my life. 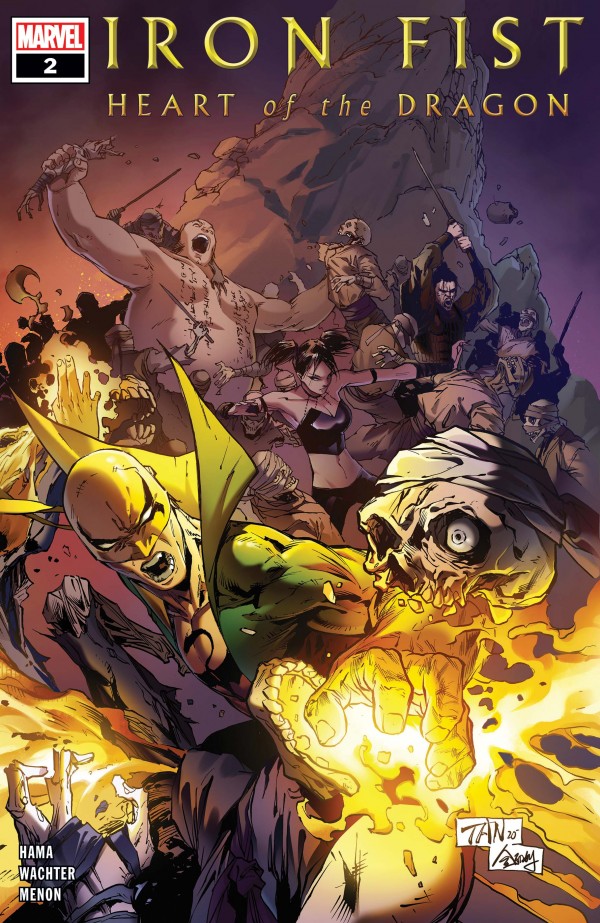 In all honesty, with the first issue, I didn’t think that this story would fully capture me, but with respect to the theme that I’ve chosen for this week, I’ve looked at this book with a different perspective and I have to honestly say that this issue totally has my attention for this week.

The mythological aspect, the focus on the 1970’s costuming, the complete validation of Fooh as not just being a subservient underling – everything that I saw in the first issue got repudiated in this second issue. That means: growth.

The cover, by Billy Tan, one of the nicest guys in the industry, is just absolutely breathtaking. Billy’s work is always awesome. I know – I have some.

Look, who am I to criticize Larry Hama? The guy knows his job (lousy artist, by the way – just saying, I have proof) and he knows how to properly set up a heroic character that readers can immediately invest into – and in this case, the mythological, magical background that he infuses Danny Rand with hearkens back to the 70’s Kung-Fu mysticism that readers of my generation would understand but that new readers would be entranced by.

The inclusion of Dog-Brother, Fat Cobra and the Bride of Nine Spiders makes this more than just a 70’s Kung-Fu comic – it’s an extravaganza that needs to be fully enjoyed. I loved these characters when I first met them in Matt Fraction’s run and I’m sure Hama has had some fun with bringing them back.

But the recognition that they added to that 70’s vibe can’t be lost on Fraction and that is testament to the fact that a 21st century author can have a degree of authenticity and authorship of a genre, from at least thirty years prior to his writing, included in another writer’s work – from his own generation of writing, no less. This is an example of perfect continuity, within the same work, by writers of two different generations. What an excellent show of collaboration.

I’ve always loved the character of Iron Fist. What a great concept. The measure of the hero is perfectly represented in the amount of resolve in the character. I think this is a perfect representation of the 70’s vibe I was talking about, but in this case, I think it’s a perfect eternal vibe. I want my heroes to be resolute Regardless of the flared collars or any other definitive costuming style, Danny Rand has the right measure of heroic abilities set against overwhelming odds. This makes a great story – how will he overcome? I don’t know, but that’s the attraction to reading it, right? In this case, I want to know more

However, I definitely won’t look at Fooh the same way after this story!

So, I think it’s only fair to say that this is the comic for the week. I mean, it’ got everything I was looking for this week and the talent is great. Dave Wachter knocks it out of the park with the degree of emotionality in the characters’ faces and, of course, what can I say bad about Larry Hama’s writing? I can’t – so it’s a great comic that fit my vibe this week, and I hope it hits yours!

Remember the four-colour comic heroes in your lives and what they meant to you! Until next week!

Pick of the Week: Iron Fist – Heart of the Dragon #2