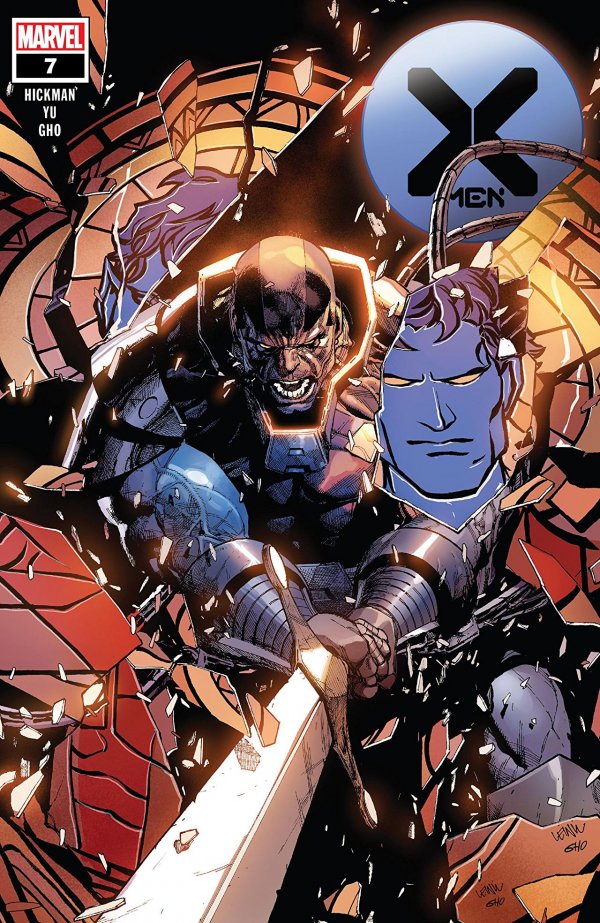 I never used to have problems with faith. Then, I became an adult and found myself in situations where I was really in need of what faith promises to provide. Faith is a belief in the things unseen. It can take the form of believing in spirituality, ethical standards or even in the nature of people.

My faith in the general nature of people has been shaken by events in the world, both public and private. It’s something I’ve been wrestling with and my discovery of a similar theme in X-Men #7, titled “Lifedeath” from Jonathan Hickman, Leinil Francis Yu, Sunny Gho and Clayton Cowles this week has left me with a deeper sense of reflection to muse on for the rest of the week.

Hickman’s creative strength is his ability to build worlds. However, in this situation, he is re-building a new world of Mutant-kind out of the foundations of what has been previously established. He is taking canonical material, rewriting it and bringing the entire Marvel Universe of mutants into greater relevance. He’s demonstrating that he can effectively redefine mutants from how we have traditionally seen them to giving them a collective sense of purpose and, and consequently, new identities.

There is a near-religious aspect to Hickman’s writing, and we see familiar elements in his presentation of The X-Men. The island of Krakoa is not only a place where mutants can live in peace, free from persecution and with their own kind it’s also a sort of Xanadu; a veritable ”Promised Land”, if you like. All mutants are welcome regardless of their past histories or associations, based on an apparent idea of mutual acceptance, and like that, all previous histories and misgivings are forgiven.

There’s a great theme of redemption present in Hickman’s presentation. It communicates the notion that we can all be forgiven. Even Apocalypse, towering above tiny Melody Guthrie, and despite his imposing and intimidating presence, is somehow representative of this idea. The Apocalypse I first met in the 1980’s is now a symbol of redemption, forgiveness and the gateway to Melody’s salvation?

I’ll come back to that later.

Kurt Wagner is one of my favourite characters, a man resurrected and one of great faith. So, when he explores his home and discovers a place that was created perfectly, exclusively for him by Krakoa, his reaction is that it makes the hairs on his arm stand up. Why is it that this priest of God, when confronted by seeming perfection still has questions? Is it because we cannot grasp the notion that maybe we deserve forgiveness? That we are unworthy of it?

Like I said, I have problems with faith. It is an enormous request of X-Men fans to simply accept that a former villain of his magnitude is a creature of such promise. Apocalypse is a welcomed citizen of the Mutant Nation, accepted and welcomed by an entire population who believe that he is capable of this promise because of his devotion to the ideal of protecting the Mutant species.

I am an enormously unforgiving sod. Once I have been crossed, it’s difficult for me to find faith in that person again. Don’t get me wrong, while I have a great deal of patience, once that limit has been exhausted, I cannot find the effort to forgive the person for their transgressions, especially where there is a sense of justice concerned. I suppose I still cling to the classic “eye for an eye” notion.

I suppose that is why I have difficulty in accepting Apocalypse as one of the “protectors of the faith”, in this story. I just find it hard to believe in this character, particularly after the harm he has done to original five X-Men all those years ago.

But then, there is the spiritual side to this as well, and I guess that’s where the faith comes into being. Krakoa isn’t just a place where mutants can live in peace, but a place where they can be reborn, healed of their ailments in body, mind and spirit. Apocalypse has gone through this transformation and now, in this issue, he offers the same chance to Melody Guthrie.

Krakoa is the soul-healing Deus ex Machina here. That’s what makes the forgiveness and acceptance of every mutant in the world possible and it’s what readers must accept in order to grasp what Hickman is offering.

For once, the X-Men aren’t at war with each other. They aren’t despised by a world that they have tried to save. They are living in apparent harmony with each other and for once in their sixty years of comic history, they actually seem … happy? Maybe that’s the message that Hickman is trying to communicate and like the notion of forgiveness, we need to accept about his presentation of the X-Men?

I think I need to take a breath.

I want to talk about Yu’s artistry for a moment, and give my head a chance to absorb. Yu’s work is evocative. It communicates feeling and intent. This is a story with a lot of poignant emotions and Yu’s work is sincere in this regard. Likewise, Sunny Gho’s colouring is spectacular work, adding nuance and intensity to an already emotionally-charged story that left me with more questions than answers.

Coming back to the notion of being happy when being forgiven, rather than Melody Guthrie’s Crucible (you’ll find out more about that as you read – no spoilers!), the conversation between Scott Summers and Kurt Wagner about the Crucible is the most important element in this story because it dwells on simply accepting and believing rather than asking the questions.

Faith goes hand-in-hand with forgiveness. To forgive means that you have faith in the offending person’s ability to redeem themselves, to fix the damage they have caused and to do no more harm but only good. To be someone that you could call a friend, I suppose. In this regard, I think my faith is still somewhat lacking.

I still can’t forgive people for their harm. I don’t have faith in humanity’s ability to redeem itself in this sense.

Somehow, Jonathan Hickman does. Maybe, just maybe, he’s a happier person than me?

X-Men #7 is the pick of the week because it made me think about this.