The mission. The task. The responsibility. The measure of a successful character is the dedication to the task he has either been given or has given himself.

That’s what we are looking at this time around. So, let’s get to the list for this week! 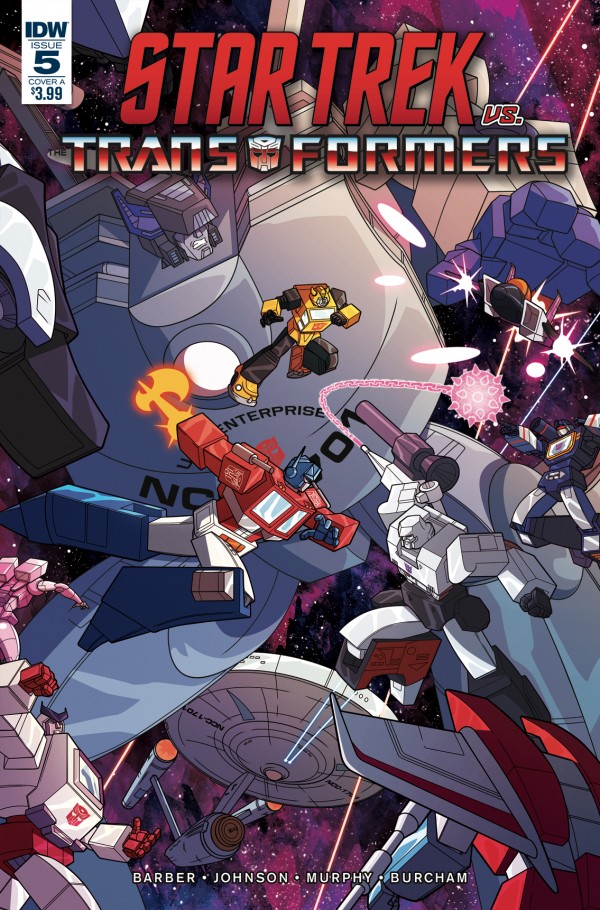 I remember scheduling my Saturday morning cartoon watching like it was a task that needed to be accomplished! Of course, at the age of ten, what other responsibilities did I have 7:45 in the morning on a Saturday?

But it was about keeping track of good stories. That’s what this is comic is about: it’s a simple story in which we get to see the animated Star Trek and Transformer characters in a more playful sense. That’s kind of the way I see it.

Star Trek TAS avoided a lot of the main themes of Star Trek and used simpler scripts aimed at younger audiences. For a lot of people in my generation it was a gateway back into the original series. That seemed to be its job, in my view. After all, we do know that Gene Roddenberry was planning a return to the small screen with Star Trek: Phase Two, but that evolved into a feature length film. Yet TAS continued the interest in Star Trek for a lot of people, but in a less serious and challenging mode.

It’s the same with this series. There are no great demands on the reader save that it’s just like pretending which super-hero can beat each other up. Mike Johnson, John Barber, and Phillip Murphy are clearly just having loads of fun. 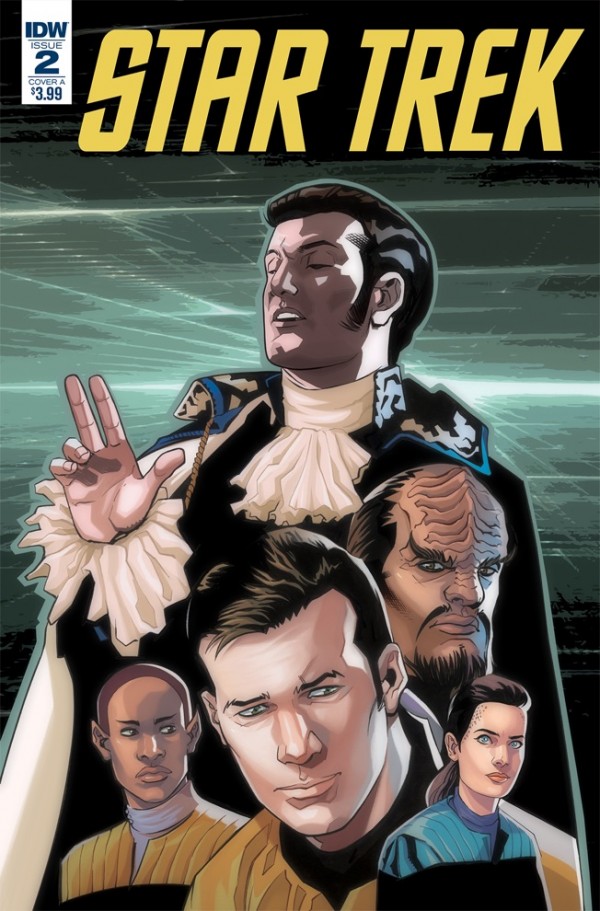 Speaking of Saturday morning cartoons, anyone remember the Hanna-Barbera “Wacky Racers?” Teams of crazy automobiles would have to team up to achieve a specific purpose during a leg of a race that seemed to go on forever! But you never knew which team was going to win, so it was a bit of a story with the aspect of a sporting event combined.

In this case, with David Messina providing the art, Scott and David Tipton have engineered a scenario in which the Q and the other seemingly omnipotent entities in the Star Trek universe have assembled teams from various incarnations of Trek to settle a disagreement among them. Matching personalities like Captain Janeway, Picard, Kirk and Sisko with a mixed assortment of the command crews under them into new teams make this a real competition.

The problem though, is that the reader has a vested interest in all the teams as they feature all of our favourite characters from TOS, TNG, DS9 and VOY! There is no one team that you want to win over the others, but this poses a problem for the so-called Eternals. How will their dispute be settled if all the teams seem to be evenly matched?

I guess we’ll see which team is the writers’ preferred characters when the overall winners are revealed! 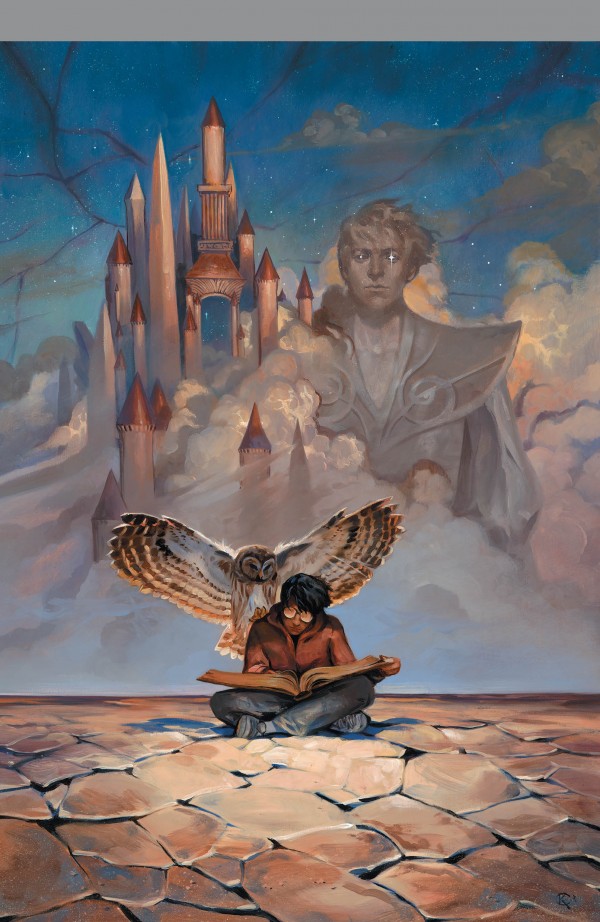 Tim Hunter has a self-imposed task: learn all the magic he can and simply stay alive.

Tom Fowler, Kat Howard and Jordan Boyd are clearly masters of their own magical domains as we are transported to a world that I think many readers wish they lived in.

I think this is a book that has a major learning theme. Tim is discovering aspects about magic that he didn’t consider in advance. However, there are also hidden dangers and threats that hide in the shadows. Tim just doesn’t just have to learn about magic – he needs to learn how to use it to keep himself safe and alive.

I know that goes without saying, but it’s that sense of discovery that really keeps me coming back to this story. 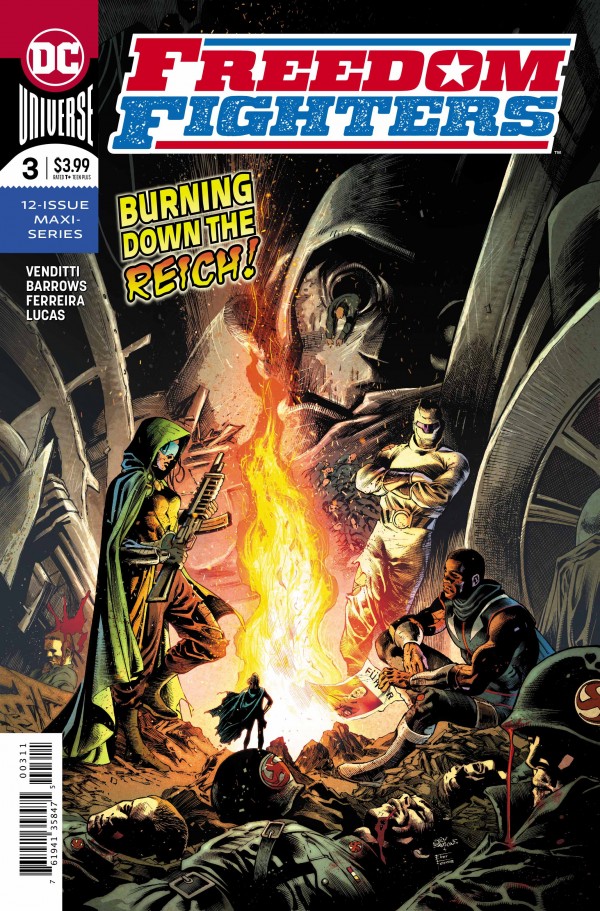 Bring back America – the way it is supposed to be! That’s the mission in this story. Every American has an obligation ensure that the USA is free and a place where dreams can happen, right? I love the idealism and it does tap into the duty that every US citizen is supposed to have burning inside them. You know, the flame of patriotism, and all that?

I don’t know if Robert Venditti and Eddy Barrows have their own “citizen’s code” or something, but it’s clear that there is a message in this book. It warns America of the dangers of authoritarianism by bringing back the worst nightmare of the 20th century and placing it in charge of today’s USA.

In any event, and not presuming to speak for Americans, but I would imagine it is every American’s duty to uphold their way of life; to value others’ independences as well as their own freedoms. The diversity of America is supposed to be a respected value, am I not mistaken? If so, then a Nazi regime in the USA would be the antithesis of that duty.

Anyone seeing an allegory here? Good, because it’s one that’s needed in this day and age. 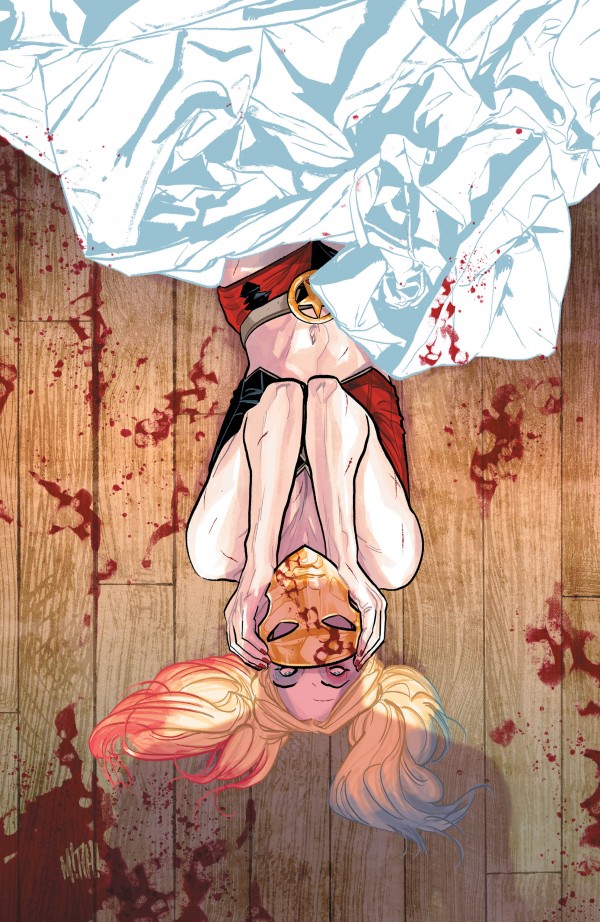 Sanctuary is a place that holds a special responsibility. Heroes need healing in as much as every member of those folks in the public service. It only makes sense that they too would experience effects like PTSD and the like.

But the problem I have with this story is that it seems too large to be properly conveyed in the episodic manner of the comic medium. There’s too long of a gap in between issues and to pick up immediately in the middle of a story after a month to allow the story to continue. I need to be reminded or I have to go back and find the last issue and pick up where it left off.

King writes deep material. He knows the way people act, think and his prior service to his country gives him a unique insight to be able to communicate these effects. But this comic is a real allegory for the mental health issues these – and other faceless thousands in society suffer. The question is: where is their sanctuary?

In this harsh, uncaring America of the 21st century, I don’t think anyone really knows the answer to that question.

Mitch Gerads and Clay Mann tag-team this book this month. As much as Clay Mann’s art is incredible, I didn’t like the transition between the two styles. I wished they had’ve kept just to one artist. 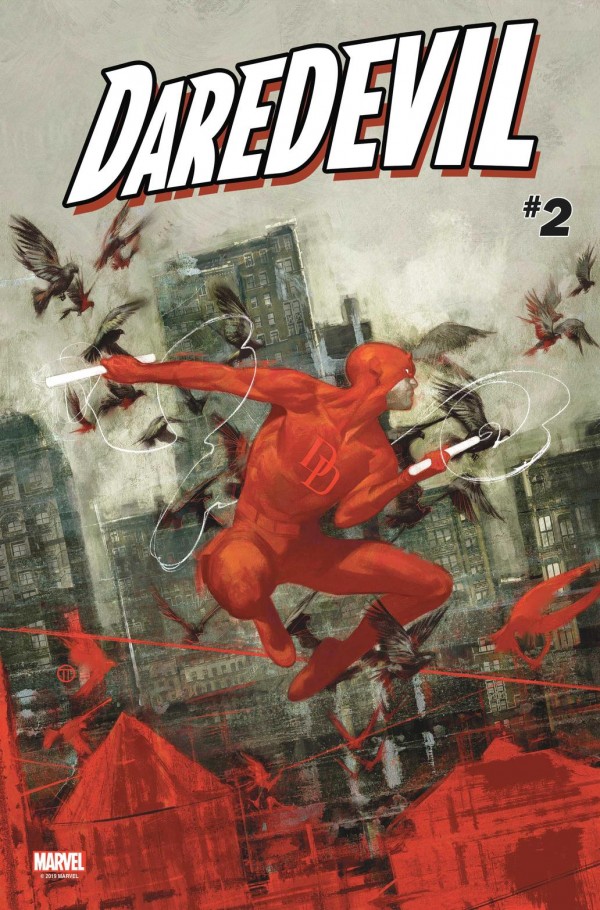 This book has a narrative tone to it that sounds like a cop’s voice. Matt Murdoch’s task is to redeem himself; to bring him back to his former self’s standards. The near-death experience he suffered has definitely given him cause to doubt himself and his abilities. As we saw last issue, the death of a petty criminal is being attributed to his diminished abilities but as Daredevil gets stronger, so does his resolve and sense of duty.

The personal conflict between these two similarly-structured characters is the meat. It’s greatly entertaining to see two noble heroes in conflict with each other while trying to accomplish the same ends. However, each has their own particular mindset but it’s clear to see that eventually they will become firm allies in the future. It’s a great introduction and set-up and I love seeing how the Kingpin freaks North out.

Mark my words: Zdarsky’s and Marco Chechetto’s run on this may prove to be one that will stand out as one of the best redefinitions of the classic character.

Meredith Finch has clearly enjoyed her time writing this classic fantasy tale where the dedication isn’t about fulfilling a task, rather it’s about upholding an ideal. Rose is a force for good who still learning about the extent of her power by the end of this series. While she is able to represent this good, it’s still not entirely clear if she knows what she can do with it.

I found that the series ended fairly abruptly. Hopefully Finch will be able to explore more of this world in a later series and we can see what Rose and her khat, Thorne, will be able to do in upholding this sense of good. But, stories about the dedication to an ideal are never bad things to read about. 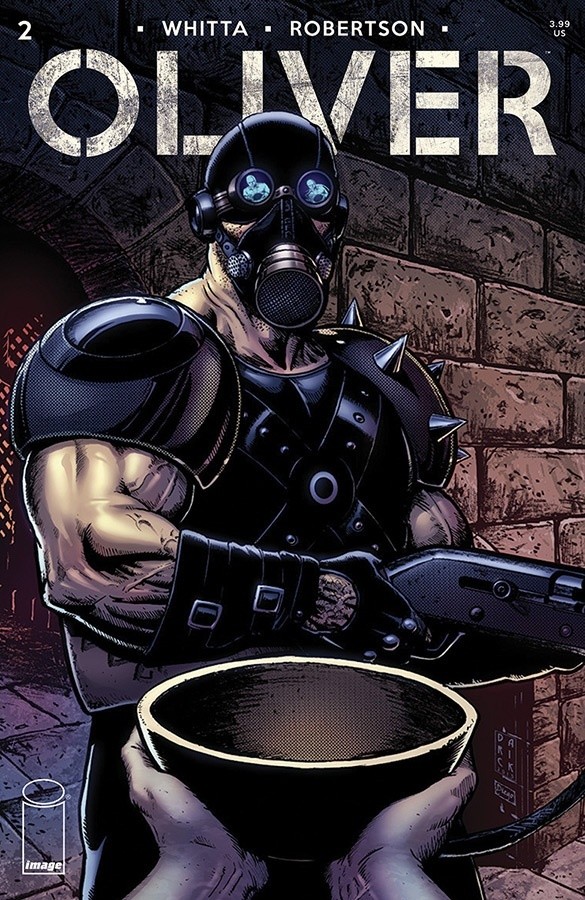 An inspiring tale of the nobility of society’s orphans.

Darick Robertson and Gary Whitta have thoroughly captured the intense struggle and bleakness of Charles Dickens’ original Oliver in this Dystopian sci-fi story. What a profound and unique comic. It is an overpowering book – and we’re only two issues into the series.

Other than the incredible art and emotionally rich story, what also captures my attention is the innate sense of responsibility the main characters demonstrate; the instinctive dedication in the “IV’s” – the genetic clones used by the British government to fight their war then discarded to form a serf-like work force that is the backbone of their economic production. The theme of artificial people proving themselves to be more human than their creators is hard to overlook and is always good for a morality-based story.

But Oliver is special. Not only does he seem to possess the physical characteristics of the IV’s, but he has something more. His mysterious background, his desire to know more about himself and his steadfast loyalty to the clones who raised him all point to special role for him in this post-apocalyptic society.

The clones, particularly Prospero, all know that Oliver has this special role. His welfare is their mission in that they know to keep him safe for that role.

I think we see nobility in the lowest of classes here. The leaders of the battered post-war Britain certainly do not represent the best values that humanity can offer. I live for these things in real life and yet to see them reflected in this story makes it not only personally relevant to me, but also exemplary to the rest of us.

Too often this decade have we been disappointed in the leaders of our present age. It reverberates through our society. Recently I heard a 13-year-old student falsely accuse his teacher of lying, shrugging his shoulders with the dismissive comment: “everyone lies”.

Is Humanity naturally cruel and brutish, to paraphrase Thomas Hobbes? I hope not, but Oliver shows us in his innocence and mystery that given the occasion, mankind can rise up to the challenge and be better. Mankind has the capacity to be a defender, a healer, a teacher and most of all, a lover of all things good … and I hope that includes Humanity.

I think that should be everyone’s mission. Our task. Our responsibility – and Oliver tells us that.

That’s why it’s the pick of the week for this week’s list.

Pick of the Week: Oliver #2