Surprises can make or break a comic.

It’s all part of good storytelling, of course, but in order for surprise to work as a story development device, it has to be based in the proper context of characterization, backgrounds and established history of the comic. If these things aren’t arranged properly or in good measure, then the surprise becomes superfluous and wasted.

There are a few examples of this idea in this week’s round-up. Let’s take a look at the list. 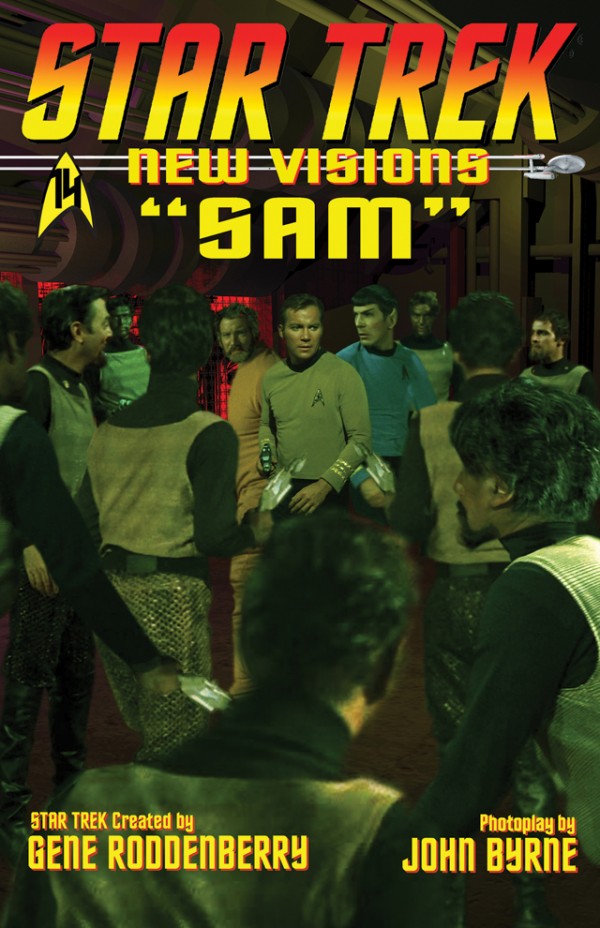 Completely brilliant. John Byrne always manages to surprise me with his unlimited imagination in creating new Star Trek TOS stories. I always wonder which is more responsible for his success with this venue: is it his established status as a legendary comic creator or his love for Star Trek? I guess I’ll never know as I won’t get a chance to ask him. Byrne doesn’t do interviews anymore and only appeared briefly at the 50th anniversary celebration in Las Vegas this past summer after much cajoling – his first public appearance in ages.

He’s been taken out of context by comics journalists in the past and while I can understand his reticence to enter back into the field again, I selfishly have to say that he’s never met me and needs to give me chance! I mean, If there was anyone I’d ever want to interview in the world of comics, it would be him – but even though I grew up worshipping his work on the X-Men, the Fantastic Four, Iron Fist, to name a few, I’d just love to chat with him and shoot the shit about Star Trek.

Star Trek and comics are my two favourite pastimes. The facts that Byrne has that sense of shared love as me, as well as immigrating to the Canadian prairies from the UK as a young lad – also like me, have convinced me that we have a great deal in common; I’d sacrifice an organ to find out what else – well, a non-essential one.

In this book, we get more of an insight into Captain Kirk’s older brother, Sam. Accused of murder on Starbase 11, the Enterprise has been diverted to pick him up and transport him to Earth to stand trial. Of course, when it turns out that he knows more than he’s letting on about a Klingon spy, the story takes a turn for the worse and the crew of the Enterprise are forced to engage a Klingon battlecruiser.

But, what about the Organian Treaty?

I love that Byrne can easily toss Trek details into the mix and come out with a book that is, in structure, essentially fine reproduction of another episode. It looks effortless. I mean, you can even hear the theme in the background of your mind as you turn the page and even supporting incidental music as you move from section to section. It’s a Trek lover’s delight and a loving tribute to this franchise from a legendary comics creator.

Or dedicated fan? I’m not sure, but either way, Star Trek: New Visions #14 gets my honourable mention for this week! 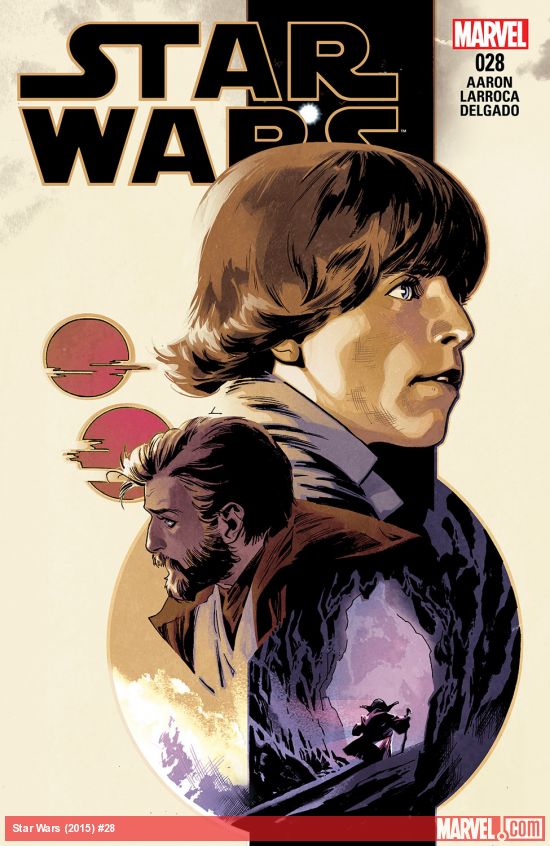 This is a thoughtful and inviting examination into Yoda’s past that is part of a very enjoyable storyline. I still swear that Star Wars is Marvel’s biggest draw and hopefully they aren’t relying on it. With Jason Aaron on board though, it’ll be hard not to.

I really am entertained by the extension of the Force into something that manifests differently on another planet. It’s a very cool extrapolation of the mystical field that not a lot of folks have really paid attention to in their storytelling. It’s very clever and I look forward to seeing it developed further in later issues.

Still, with the lack of resolution of Yoda’s adventure, the jarring interruption of the story and its continuation into next issue, I was a little disappointed. Not that it was bad – I am such a fan of Jason Aaron’s work but this issue just didn’t fully do it for me. I think I need to see the entire storyline overall to get a better appreciation of this issue. 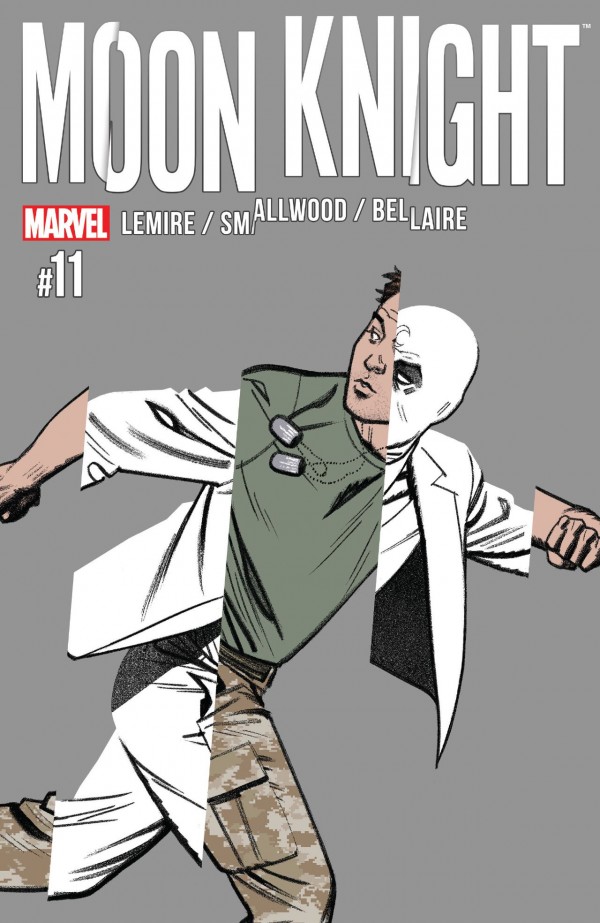 A bit more of an accelerated pace in this month’s offering and this is a great cover by Greg Smallwood.

I like that Marc Spector has a goal instead of simply trying to get out of the institution he was in. I also am in favour of seeing the character move away from his multiple issues as a main storyline and on to another path. It’s taking too long for Moon Knight to return to his super-hero roots and I’d like to see a more separate storyline develop.

While the subject of mental health is an important one, I’m getting a little bored by it. Comics, like any other medium of expression, can be used to talk about various topics, but they’re also about entertainment. Right now, I’m not feeling like I’m being fully entertained by this book. I’d like to see a resolution to Spector’s multiple personalities fairly soon as there’s very little surprise left in this book for me.

The Fall and Rise of Captain Atom #2 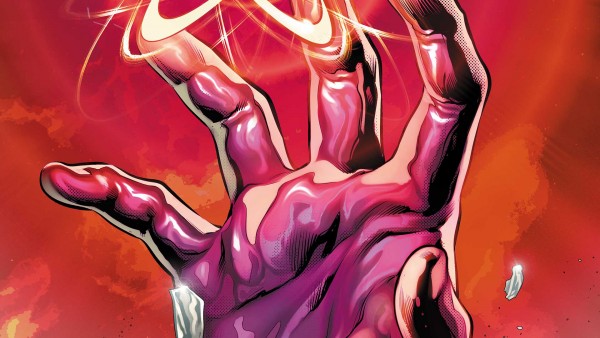 This one really did take me on a bit of a trip. I have to say I didn’t expect where Captain Atom landed after we saw him explode in the first book of this six-issue mini-series. Clearly, a big part of the surprise was that there was a Captain Atom in the first place as the last issue had pretty much defined his end.

But Cary Bates and Greg Weisman managed to pull the wool over our eyes on this one. Seeing as there are five more issues to go, the story couldn’t have ended with the first one. But it’s the mark of a masterful writer – or writers, in this case – to trick the reader into thinking that the end has certainly come for the hero and there’s no way out.

I’m not overly familiar with Will Conrad’s artwork. As this was my first impression with it, I have to say that I enjoyed it as well. Good to know that his work makes good first impressions.

I hate to give this one away, but I can’t really avoid it. The fact that Nathaniel Adam winds up back in the 1990’s, a decade when super-heroes hadn’t arrived yet, without his powers, identity or a penny to his name. That threw me for a loop as it forced me to re-examine my DC Comics continuum.

I enjoyed the process of reconciling Captain Atom’s past with the new Rebirth era and I have to say it was a delightful experience. Of course, when Captain Atom’s powers start to seep back, well, that’s a perfect breeding ground for more surprises to occur. In this case, the element of surprise definitely worked out well for this book. 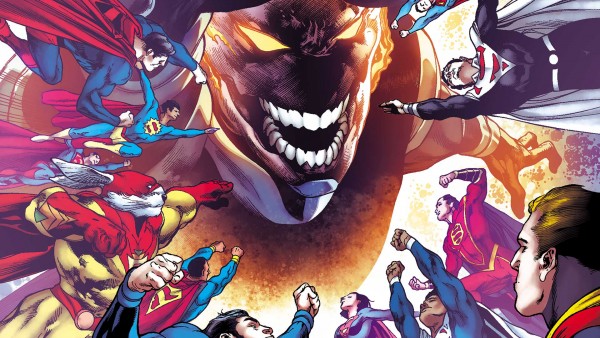 I have to say, I didn’t fully enjoy this one as much. Not that it was a bad read or that it didn’t make sense, but that it was a typical Superman story. Peter Tomasi and Patrick Gleason can’t be faulted for their work on this book, but there was no doubt that an army of Super-folk from the Multiverse would be able to put the uber-villainous Prophecy down for good. Tony Daniel and Clay Mann deliver amazing artwork but I have the say the book felt like a guest-book for the different Supermen characters, particularly the New Super-Man, which is a very unsurprising tack for this book to take. 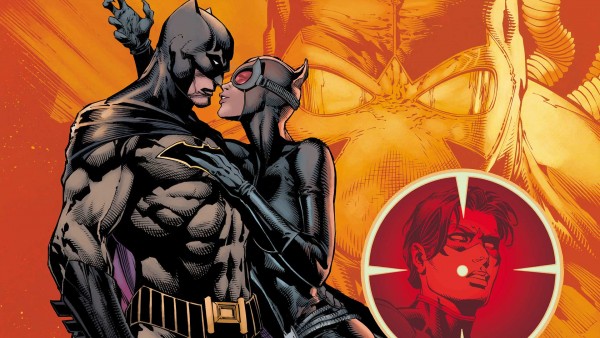 Seriously excellent art-work with an incredible surprise waiting for the reader by Tom King at the end of this particular and emotionally-rich issue.

The entire theme of this issue is trust. Batman has allies – family, even, related to him out of a bond of trust and a recognition that bond is unbreakable. The scene at a Batman-themed fast-food restaurant is not just comedic relief, it’s a chance to emphasize that bond and to remind readers of it

I like Tom King’s presentation of Damian Wayne. When he was originally introduced I felt he was a character devoid of any growth simply by being the grandson of Ras Al-Ghul. King has taken this character and made him into a son – a product of his environment, but able to adapt to the mantle of being the son of the Batman. These are all parts of King’s exploration of Batman’s relationships: Selina Kyle, his former and present sidekicks and even Bronze Tiger and Commissioner Gordon. I think King’s greatest contribution to the Batman is to make him more human and more relatable.

But the surprise at the end of this book was the greatest one I’ve read out of the list, and for that reason alone, Batman #16 is my pick of the week!

King certainly has a lot of surprises in store for us and this book is a clear example of using the element effectively! And David Finch’s work, is always a joy to behold, which makes it as good as any pleasant surprise! I look forward to seeing more what else happens in this book! Until next week!