The February blahs are pervasive. I don’t know about other sun-enriched places but up here, in the land of the ice and snow, we need a change from the dreary and cold routine.

Which is why every new comic Wednesday is such a much-needed break in the middle of the week! Adventure, excitement – maybe a Jedi craves not these things but a middle-aged, comic-readin’, Star Trek-lovin’ teacher of geeks does! However, I will settle for vicarious adventure brought to me by my favourite comic creators. So let’s get to the list for this week and see which title really brought the adventure to an otherwise dull week! 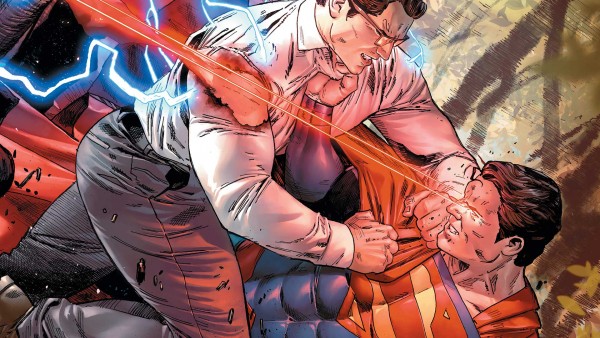 I love the cover. The image of Clark Kent and Superman going at it has definitely been done before in the past, but it’s still a gripping one, especially with such a long-drawn mystery around the existence of both the Man of Steel and his alter ego as separate entities. Certainly it allows Superman a degree of flexibility and freedom to be in his hero identity and spend time back on the farm with the family, but I’ve been dying to know what’s going on with this “rogue” Clark Kent.

I can’t say I’m particularly blown away by Patch Zircher and Stephen Segovia’s pencils; it seems somewhat hurried ad imprecise, but as I’m not a comic artist trying to meet multiple deadlines, I can’t really offer any more concrete suggestions on what to change so I appreciate their efforts. I can only say if I like it or not and while it was definitely passable, it wasn’t my favourite.

Sad to say, my curiousity remains unabated. In fact, I’m starting to get the idea that even Dan Jurgens doesn’t even know where this is going to go. So much for an exciting reveal for this issue; I suppose I’ll just have to continue waiting. 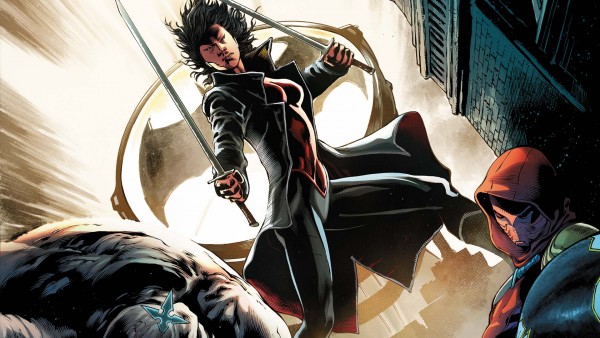 This book definitely fooled me. It’s a bit of a bit of a sleeper in the first ten pages or so, but by the time you get to the final stages of the story, you are taken in by the intricate workings of the League of Shadows. To be fair, I was initially a little dulled by the story but it’s a bit of a slow burn and the last few pages really woke me up and made me really appreciate the nature of the danger of shadow assassins. While I was given a bit of a thrill, I have to say overall, it didn’t give me the thrill I was looking for. Not a bad book, after all, James Tynion IV knows what he’s doing with capturing Batman, but with February’s effect, I needed a severe jolt! 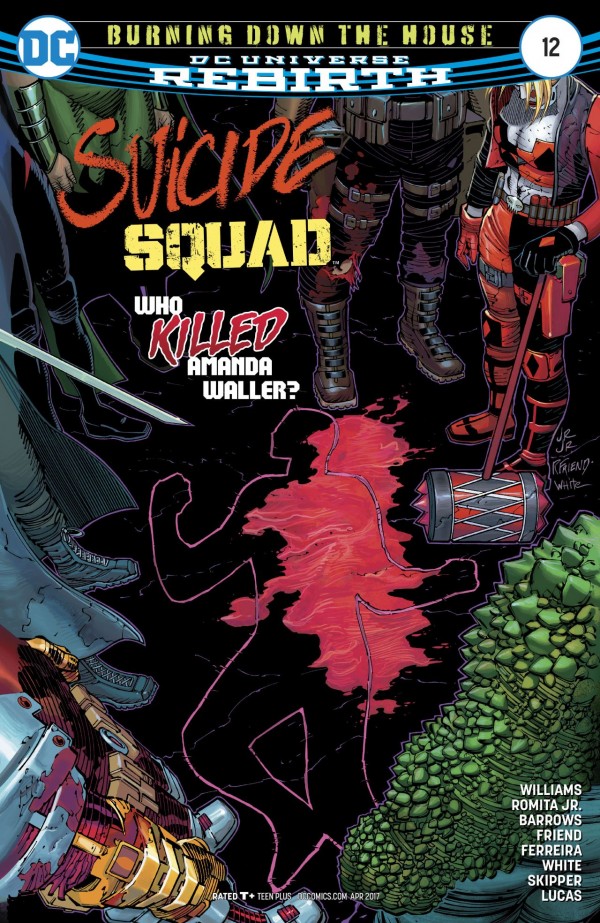 Who killed Amanda Waller? Yeah, that’s definitely an interesting question and one that sets me up for an exciting read. With John Romita, Junior’s cover and interior art, I’m primed and poised!

… Also, Rob Williams’ reference to a 1980’s top 40 hit as the title for this story also gets my attention! Yeah – I’m an aging man-child.

Sadly though, with all the promise this book offered, I can’t say that I got into the story. Rustam and his released prisoners are about to soundly thrash the Squad but spare them in the wake of the announcement of Waller’s death – which was given away in the title, folks, so no spoiler-crying, please! But I have to say that this book, even with its second feature story, it just didn’t do it for me in the end. It was a bit of a let-down. Still, I have to say that the second feature was valuable in the fact that it added additional contextual value but the break in between the two stories was a tad jarring and interfered with the continuity of the story. I would have much preferred a single, longer story rather than two short ones. In short, the execution of this book just seemed … off. 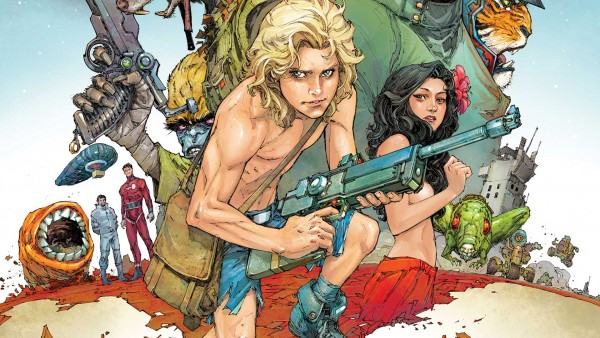 I had such high hopes for this book, seeing as how much I enjoyed the first issue! It’s just such a novel concept, to have writers actively working against each other in creating an exciting story designed to foul each other and push their imaginative efforts to the limit. Plus, seeing Neal Adams work on something that’s within his era but in a new direction is definitely worth anticipation and with Peter J. Tomasi scripting it, there is something to look forward to with this book.

This was incredibly exciting and fun to read! When you see the variety of foils and encounters that Tomasi uses in order to surprise the reader with escaping the trap set for him in the previous issue! I loved every page of this book and definitely got the thrill I was looking for this week! It’s a winner in my book and certainly gets my honorable mention for this week! 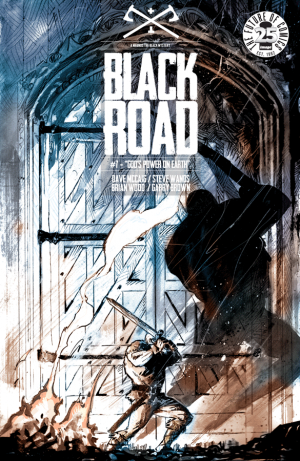 My God, what a captivating tale. I love the juxtaposition of pagan and early Christian struggles in a mythical land that could have existed at the dawn of Christianity in Europe. It’s exciting to see the political fight for dominance between these two belief systems and in the middle, Magnus the Black acts as an impartial observer, seeing the advantages and disadvantages of both systems and just walking a tight line between the two of them.

I want to know Brian Wood and Garry Brown’s inspiration for the conceptualization for this story! Creative inspiration is always a source of fascination for me, so I’m definitely up for an interview with the two of them to talk more about Magnus, early Christianity and just where the heck this came from. It’s bold, it’s grim and it’s certainly a thrill to read.

My only problem with is – like a lot of Image’s books – is the frequency of its appearance. It’s not regular and when it does come out, it seems like the pages have been elongated with extra filler action in order to whet a reader’s appetite for the next issue. It’s so good that by the time the next issue has come out, the reader is wrapped up in too much gratitude to forget about how long it’s taken to get to this point.

Still, it’s visceral, daring and a book that a good comic reader needs to check out, if they haven’t already. 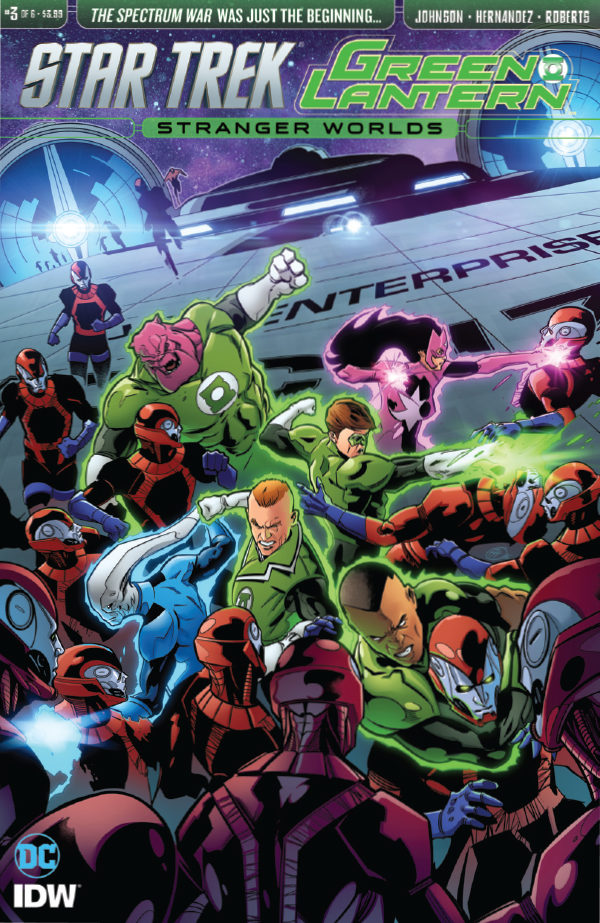 The remarkable thing about this book by Mike Johnson and Angel Hernandez is that this is the second iteration of this unorthodox crossover. Think about it: in the tight margin world of comic publishing, this got a second kick at the can, which means these creators are doing something right.

I love Mike Johnson’s writing; it’s rich and really taps into the core of the characters he’s focusing on at the time. But look at the intricacy of detail that comes out between the interaction of Captain Kirk and Hal Jordan: there’s an inherent recognition of similar personalities and a complete synchronization of objectives. Johnson makes this unlikely pairing not only workable to both Green Lantern and Star Trek fans, but completely fun and exciting to read as well.

Accurately characterization is an incredibly powerful storytelling tool and Johnson has it in abundance. That’s what makes this book really successful and when you consider the idea of Khan Noonien Singh (even the Benedict Cumberbatch one – sorry, I’m of the Ricardo Montalban school of thought here) armed with a Red Lantern ring of rage, yeah, you get to see how much fun Johnson is having with this book in exploring the variety of possibilities it opens up. It really is a “sky is the limit” deal with this creator. 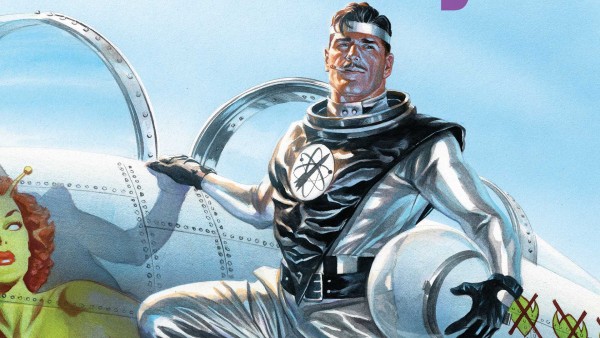 Speaking of “the Sky’s the Limit”, I haven’t looked at this book in a long time. Kurt Busiek is a much-lauded creator and one whose work I’m always interested in, but to be frank, Astro City began to get a bit of a repetitive tone for me: one of redemption or self-discovery. While I really enjoy character-driven stories of personal growth, it was just getting to be a bit of a similar routine for me.

But I’m glad to see that after a few issues away from this Super-hero city, that this was a story that was set back in a retro-time that I could really get into. In fact, this one reminded me of a George R.R. Martin character from his Wild Card series, Jet-Boy. Again, very similar to Sky Captain and the World of Tomorrow, Busiek takes these character arch-types and has fun with them. They’re enjoyable to read and fill an expectation that a lot of a lot of readers would have, especially within a retro theme.

Brent Anderson’s art is truly superior and it’s an overwhelming pleasure to see it flourish in Busiek’s storytelling.

Still, there’s also a pulp glory to this story that has to be acknowledged. I miss the thrill that the pulp serials used to hold for us that doesn’t seem to be a value in modern storytelling anymore. I want to believe in heroes and this is a book that brings back that glory of hero-worship and faith, that yes, there is someone out there looking out for us and perhaps one day, a reader like me might be one someday. After all, isn’t that what reading comics is about?

That’s the excitement I’m looking for this week, and this issue of Astro City gets the pick of the week for this installment of reviews.

But sadly, the excitement is done. I’m spent … but, there’s always next week! Until then!

Pick of the Week: Astro City#41