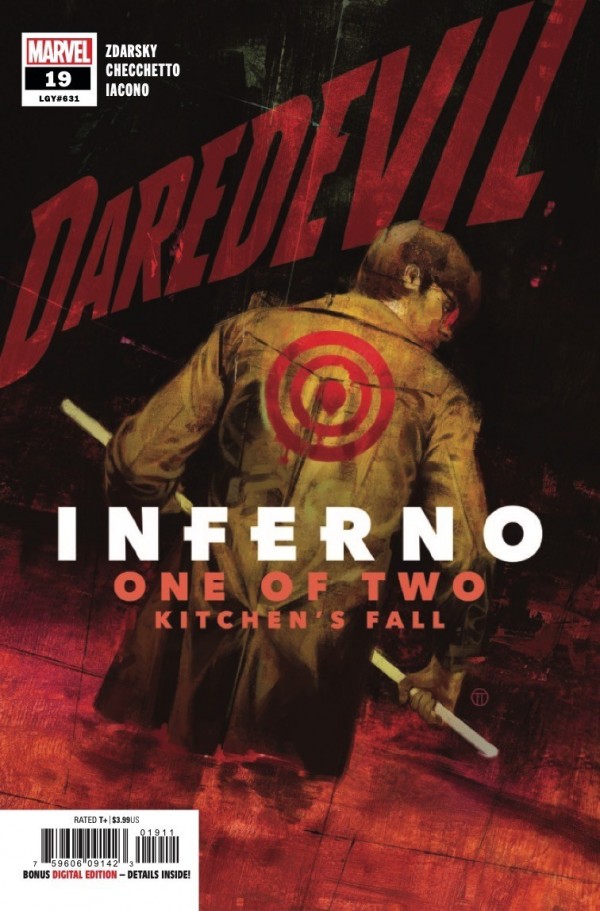 It feels like we could all use a little more hope these days.

Corruption seems to reign supreme in the daily operation of our highest offices. The systems we have placed our faith in, ie: Science, Education, even the governments of the day are all either wantonly suffering from an abundance of uninformed opinion or sheer ignorance.

People are letting me down and I’m starting to lose hope. By Issue #19 of Daredevil, so is Matt Murdock by Chip Zdarsky, Marco Checchetto and Mattia Iacono.

The situation so far: it’s open season on Hell’s Kitchen as the police have been ordered by the governor not to respond to emergency situations. The mega-wealthy Stromwyn Twins are deliberately destabilizing the neighbourhood as part of a real estate scheme and even Wilson Fisk is powerless to change what is happening in his city.

A few valiant police officers, led by Detective Cole North, have taken it upon themselves to disobey those orders and trying to bring law and order back to Hell’s Kitchen, but they are few against the many. And now, Bullseye, Crossbones, the Rhino, Stilt-Man and Bullet have added their brand of chaos to the mix, further throwing the Kitchen into deeper disarray.

Currently, I’m in a job action situation in my personal life. As a teacher who lives in the same area as my school, I have deep ties to my community. I have taught over 8000 kids in my neighbourhood and seen many of them go on to become community leaders, professionals and some have even come back to me as colleagues. But, right now, the public is frustrated by our own government who seems hell-bent on ignoring real concerns in the classroom, and making wild claims that the issues of improper class sizes, mandatory e-learning and reduction of staff and resources to school boards while increasing the amount of responsibilities on the part of home room teachers.

Yet my government seems to think that we are spending too much money on pizza lunches.

Look, I don’t want to make this about me, but I can’t help but feel for both Matt Murdock and Cole North in this issue. There’s one line that resonates with me and seems to give me some comfort. When surrounded by super-villains and apparently on his own, North simply says to himself: “People need help. Do the job.” As a teacher, I try to help people every day. Am I perfect at it? No. But I like to think that sometimes, I make a difference and in this current job action, I’m not able to make a difference, or I have people telling me that I’m simply putting kids out in search of my own personal interests.

I mean, let’s face it: there is government dissatisfaction in both the US and in Canada. North America seems gripped by this strange intolerance of integrity and accountability as the provincial government here in Canada is constantly making fiscal mistakes in issues like license plates, social assistance and in maintaining a war with teachers. In the US, climate change is openly disbelieved and the Federal Government seems to wallow in its international policy of alienating friends and allies and playing into the hands of its enemies. Why? Because of the people we trust who are letting us down with their pursuit of greed and control. Hope can’t thrive in these situations, but this is the time when we need it the most.

But then, something happens in this story that makes me think again. Far be it for me to give it all away, but it made me think that maybe that was Zdarsky’s purpose in this story: to remind us that hope can appear in unexpected ways?

Instead of using heroes to foster the resurgence of hope, Zdarsky uses villains to force it to appear.

Matt Murdock’s struggle in the last story arc was to redefine himself and in doing so, maybe he opened up a new avenue of hope to explore? In pursuit of why Daredevil is so important to his sense of purpose, then realizing who he is that he can also reveal a sense of renewed hope in the process. I don’t know for sure, but the central point in this issue definitely strikes a resounding chord in anyone who has been following this story and who has been experiencing some of the societal stress that I’ve mentioned.

I love the appearance of the classic Daredevil villains in this story, they are what tips the balance. They are the catalysts who drag hope screaming and kicking to the surface. In an issue that screams desperation and sacrifice, Marco Checchetto’s art brings that sense of emotion to life.

What can I say that I haven’t already said before about this artist’s work? It has a vibrancy to it that really works well when reading stories with emotional depth and feeling. His character positioning has an alacrity about it that conveys the type of intensity needed when discussing the possibility of the renewal of one’s hope. These are topics that need passion and combined with the passionate palate of Iacono’s colours, Checchetto’s art really sings.

With those feelings in mind, it’s those neighbours in Hell’s Kitchen who provide North and Murdock with hope in this story. They just aren’t the ones that Daredevil and the police need to protect, but they are also the source of their strength. Instead of expecting hope to appear from within, maybe we need to start looking at the sources of hope all around us and just maybe, that’s where I need to direct my own attentions.

Both Cole North and Matt Murdock are renewed by their recognition of the responsibility those in service have for their neighbours. The fellowship of a community is restorative and reminds us of why government is in place. Government is for the betterment of us all.

Daredevil #19 is the pick of the week.

Pick of the Week: Daredevil #19