There are some days when you feel like you’re being attacked on all fronts. It’s a legitimate feeling. We all wear many hats and have many different responsibilities. We can’t get everything right and sure enough, there are those days when it seems like everyone is out to get you.

This is definitely one of those weeks.

But, that’s comics for you and that’s what we’re exploring in this week’s list! So, let’s get to it! 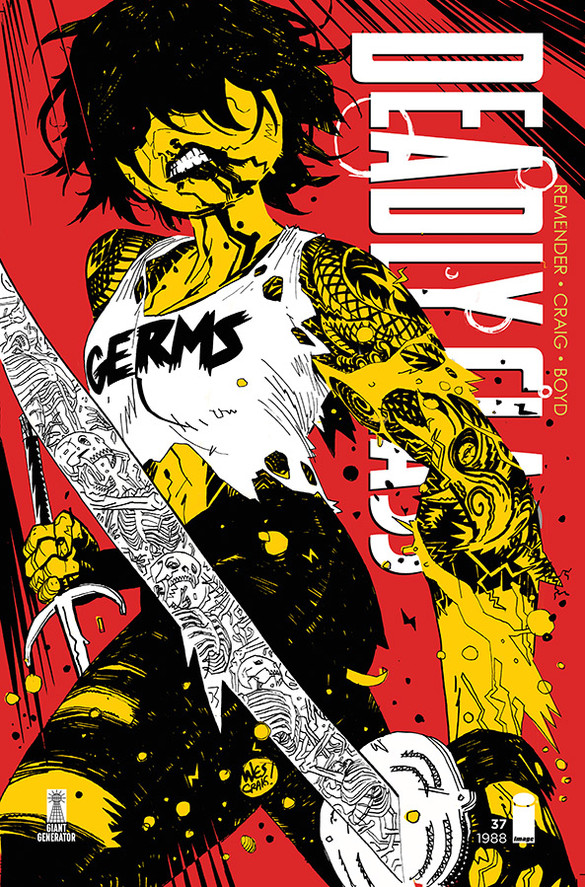 How do you grow up, face the awkwardness of adolescence and learn the arts of assassination and subterfuge? So many battlefronts in this book from Rick Remender and Wes Craig for the kids in this story to fight. Even though this is a book set in the 1980’s, these kids are dealing with issues way beyond their years to contend with. Matters of life and death coincide with the regular issues that young people have to endure – acceptance, maturation, and even family drama.

Fan-favourite Saya, is at her lowest in this issue. Imprisoned by her evil brother, Kenji, she needs to make a mad escape aided by the one person who betrayed her. Will Quan actually measure up? Like I said, there are a great many dimensions to appreciate these characters and given that we are already ahead of the television series, this gives the readers a whole new way of enjoying them.

We finally return to “Knightmares” in Part 4, titled “Cat”. I have to confess, I feel like Tom King is all over the map in telling this story. It’s so fragmented and the interruptions have given it a sense of epic proportions. So, of course, this is a story that hits you from all angles: friendship, lovers, and secrets all make up its different levels.

We gain a little bit more insight into Catwoman’s mindset as well, with regards to the Batman/Catwoman break-up. It seems that the Catwoman, interrogated by The Question about the split, has secrets to reveal. Could it be that the Batman’s imprisonment into a twisted series of nightmares all stems from having his heart broken?

Catwoman became his friend and lover. She walked away, leaving a gaping void inside the Batman. It’s one that deserves a complex examination and if there’s anything King loves to do, it’s to paint a complicated picture of emotional responses to a situation that is derived from the most basic of humanity’s motivators: hate, pain, fear, envy, and in this case: love.

Tom King’s gift at exposition is an elaborate window dressing that covers the brief bits of dialogue that contain the emotional meat of the story. In this book, we see The Question and Catwoman deftly spar with each other, as they exchange opinions about the enigmatic nature of the Batman. Finally, The Question poses the right query: why is the Batman so weak?

But is that all she said? You have to read the comic for the rest. 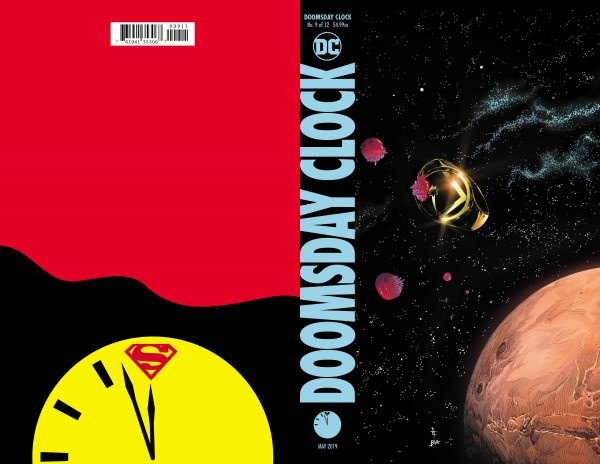 Talk about many different responsibilities and seeing a situation from different perspectives … Dr. Manhattan is exactly that.

Superman has been taken down and Dr. Manhattan’s involvement in this plot is revealed.

There’s a moment in this story when all of the superheroes literally combine their might in confronting Manhattan, and Guy Gardiner boasts how they have taken down foes like Darkseid or the Anti-Monitor and then learns exactly how powerful Dr. Manhattan in true Guy Gardiner fashion.

Of course, that’s one of the various cool facets of the book. Having Dr. Manhattan face the combined power of the Justice League and various others of the DC Universe’s most powerful heroes has enough of a “cool factor” in itself, but his power to manipulate view time and space in a near infinite amount of perspectives also mask his reason. Dr. Manhattan isn’t a force of chaos, nor is malevolent; he simply has a plan to understand the mysteries of the universe.

But, does this include a plan for self-protection or is there a greater cosmic reason for his behaviour we still need to learn?

Manhattan is involved in the lives of Meta-humans on a micro AND macro level for a purpose and Gary Frank and Geoff Johns have three more issues to reveal what that purpose is. I’m looking forward to finding out what it is. 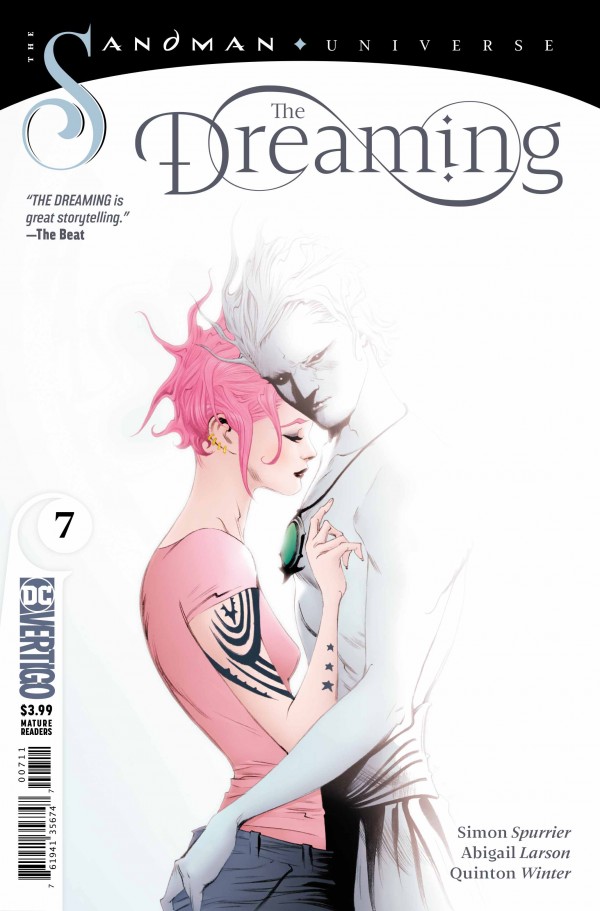 This issue of The Dreaming took me a little by surprise, and when you’ve got a million things coming at you, surprise is usually not welcomed.

First off, we can’t help but notice there’s a change in the art on this issue. Abigail Larson handles the pencils while Quinton Winter has the colouring responsibilities. The art styling is abruptly different and I’ve gotten very fond of Bilquis Evely.

Si Spurrier has given us an intermittent set-up issue. We discover that Lucien has fallen through the portal and wound up in abandoned field, rescued by Rose Walker who manages to get him to a hospital. In the course of the issue, we learn more about Rose, her cancer-ridden mother and her daughter, Ivy. Both Rose and Ivy have met Lucien’s master, and while a lot doesn’t happen to the progress of the story, we are given an interesting bit of background.

This is one of my favourite titles and I also noticed there was a slight change of pace to the overall story. But there’s no doubting that Rose and Ivy Walker’s roles will have some great significance for us. 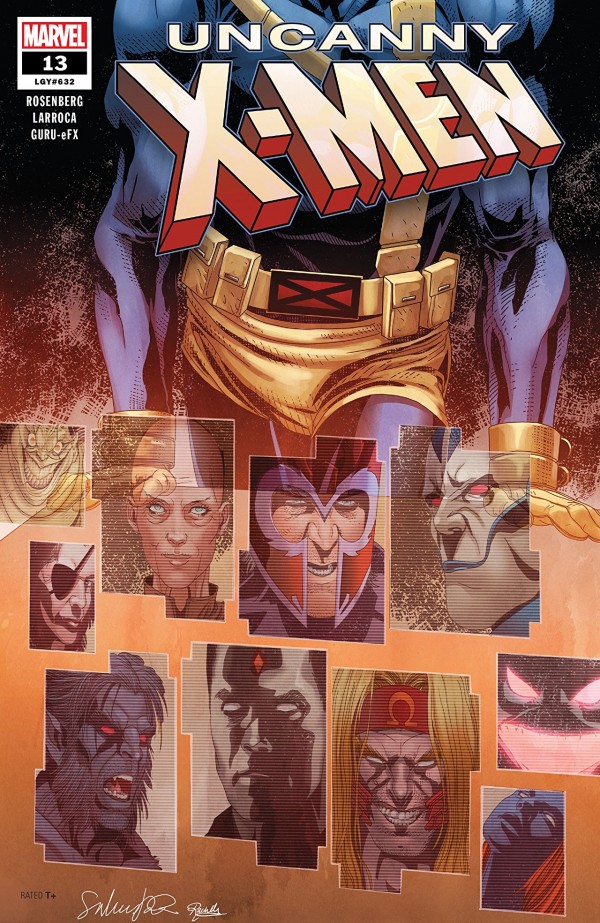 We have a lot to thank Matthew Rosenberg and Salvador Larroca for. After all, they’re reaching back into the original underlying values of the X-Men from days past and making them fit into the new century. The X-Men were hated, feared, misunderstood … and were few. Mutants were rare because mutations were freak occurrences. Over the years, the X-Men have not only grown in number but so has the number of mutants in the world. That large population of characters has diluted the importance of the X-Men and their entertainment value.

In this new incarnation of the title, the X-Men are once more under the leadership of Cyclops who has gathered a few of the remaining heroes, including Wolverine, Magik, Wolfsbane and Madrox to his banner. He’s making the former enemies of the X-Men. Bent on revenge, there’s also a tactical value in taking the fight to the enemy when they least expect it. We see Cyclops one more returning to his familiar leadership role as the X-Men clothe themselves in once-abandoned uniforms of yesteryear and go to do battle with their enemies and find their friends.

I’m enjoying this title and am definitely looking forward to the others. 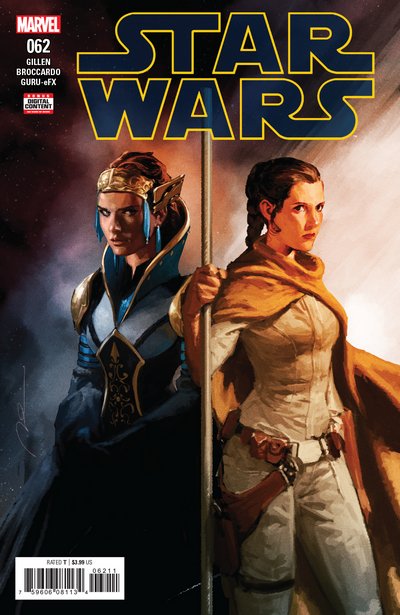 Stories like “The Magnificent Seven”, in turn, based on “The Seven Samurai” all have multiple levels of engagement. You can appreciate them romantically, heroically; they have an entourage of characters to all appreciate and they serve as templates for other exciting stories to come after them.

Part One of “The Scourging of Shu-Torun” has all of these elements but basing them in the Star Wars universe makes them even better. I’ve said this before but Keiron Gillen knows this franchise so well. This is a payback story that also recalls a lot of the most successful stories in recent Star Wars comics and some of the most original characters as well.

While this is a typically epic Star Wars story, it also has the classic vibe of another 60’s trope: the “heist” film. While the gathering of the forces is directly from “The Magnificent Seven”, the planning aspect of this book is right from “Ocean’s Eleven”.

Again, another story in which so many different types of enjoyment are coming at us from all directions. 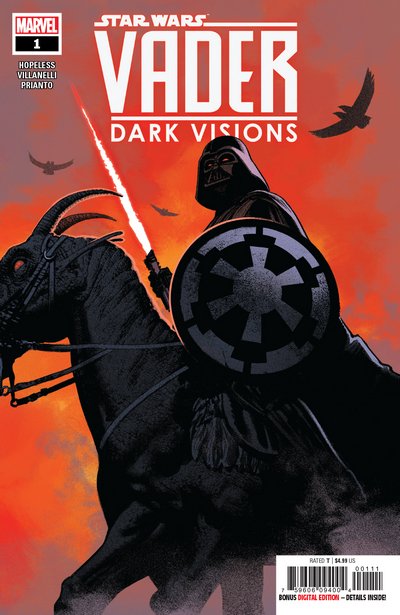 Both a hero and a villain; a knight and a tyrant, the Emperor’s greatest weapon and his own demise, Darth Vader has to be in the Top Ten list of the greatest characters in science fiction and fantasy literature of the 20th and 21st centuries.

He’s everything to write.

There is so much conflict in this character. While a master of Evil, he still finds time to rescue a small child from overwhelming danger in a battle with a leviathan when his fighter crash-lands on an obscure planet. This short tale shows so much of what we love about Vader: his might, his resolve and this strange spark of goodness that all loyal fans of this franchise know is still present within him.

Dennis Hopeless captures the intensity of all these internal conflicts within Vader. The point of this series is to examine the legacy of all who have encountered Vader. But the variety of these encounters also reveals his many different facets. Vader’s spirit is assaulted by so many things: the need for security, his ego, his thirst for knowledge in controlling the Force; but he also has a conscience that, while deeply submerged in this evil, is still trying to be heard.

With Paolo Villanelli’s dynamic art, evocative of Carmine Infantino’s work, portraying this epic battle between the Lord of the Sith and a monster greater than him by virtue of its size, this is an incredibly vivid and accurate story that all loyal Star Wars fans will absolutely love.

This is definitely the pick of the week. It’s got so much to enjoy: the franchise itself, the character but then when you stop to consider the various aspects to Darth Vader’s character, the fact that being seen in this light, as a benevolent and powerful warrior come to save a population from its greatest monster, obscures the fact that Vader is just as much a monster!

This story constantly forces you to re-evaluate exactly why fans love this character and relish in his evil nature so much, and so will, I’m sure, the other remaining four books challenge you in this manner.

Until next week, try to dodge as many slings and arrows as you can … or you could just lose yourself in a good comic book!

Pick of the Week