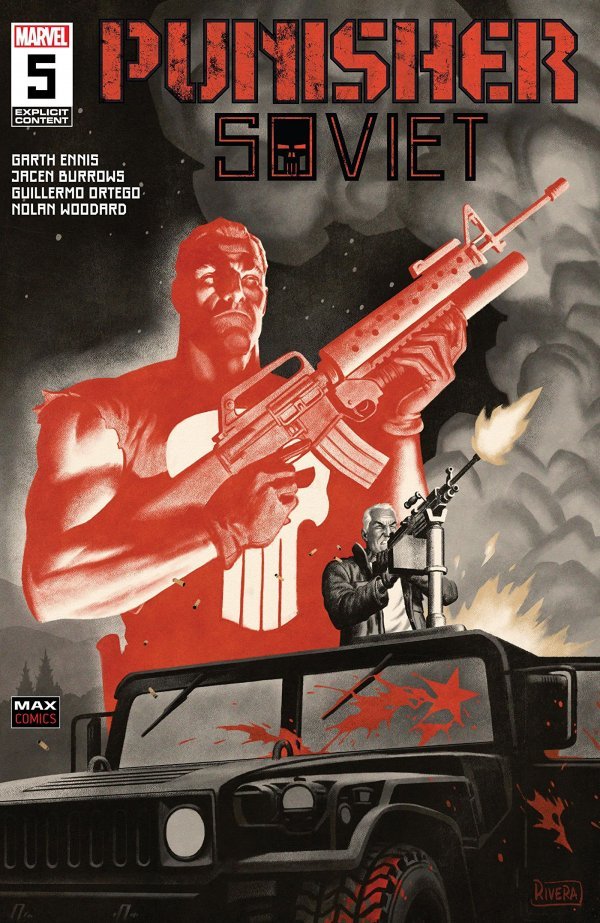 Living life isn’t just a sequence of reacting to the events that happen around you. In order for a life to be happily lived, it takes hard work, determination and most of all, planning.

In my day job, I see so many young people who could be better than what they produce if they only listened to prompts, tried to think in advance before they made decisions and most of all, were a little more aware of the events around them. Teachers and Educational Psychologists refer to this as “executive functioning”, but in layman-speak, it’s really just about getting your act together and good organization.

First of all, I have to say it: I’ve always had a soft spot for the work of Garth Ennis. The guy grew up on the same British war comics that I did: Action, Battle Weekly, Victor and so forth. He’s also one hell of a military historian and has written a number of great prefaces to the hardcover compilations of some of these books that I’ve mentioned. So, when it comes to comic writing, I’m already naturally predisposed to consider anything he’s written as a worthy competitor for my attentions.

However, from this, I can also see that he has an affinity for the military style of precision in planning a character like the Punisher would obviously include in his activities. However, when you look at the style of Ennis’s narrative, it reads like one of the Punisher’s War Journals, which not only lends a great deal of authenticity in the presentation of this character but it also adds to the story’s acceptability. After all, it would make sense that a soldier like Frank Castle would write from a first-person, empirical point of view. If you’ve ever read a soldier’s journal, they are deeply personal but explicitly descriptive and that is sometimes how we can understand the full monstrosity of war.

The fact that Ennis presents the Punisher to us in a way that has been presented in Marvel Comics before also gives us a realized sense of his familiarity with the history of the character. This guy is a Punisher expert, if you like, and that goes a long way in producing a successful comic. If the writer has no experience with the character, then chances are that fans are going to get a story that isn’t palatable. It’s kind of an obvious thing, but it happens a lot of with unsuccessful comics, particularly with new writers trying to break out. But if you don’t know what you’re writing about then you really shouldn’t have any business writing it, at least in my humble opinion.

In this story, we see both the expertise with the character and the military precision laid out. The dialogue between Valery Stepanovich and Frank Castle is an exchange of peers. Their conversation has little feeling or artifice. They mutually understand the tactical situation and are able to improvise a response that represents their assessment of their assets, advantages and liabilities. It is the language of veteran soldiers who know how to achieve their objective regardless of the odds stacked against them. It’s brilliant reading.

It’s this type of thinking that I wish I could teach, to be frank – no pun intended. Taking stock of one’s situation is something that is dictated by necessity and a little bit of fear. Some schools strive for teaching in a consequence-free environment, which I have to say, I can’t agree with. Consequences are part of the learning equation and in a soldier’s case, the consequences can be fatal. Lack of planning means death. In schools, lack of planning should have a more lasting effect than a hope that the student’s learning will eventually kick in at some point. Waiting to fail is not a way to foster learning, especially if a student has both time, opportunity and resources to do the job.

Of course, I’m not saying that students should learn like soldiers, but military school has a degree of attractiveness to me right now.

But I think I’ve always been impressed by sense of resolve Frank Castle has. He’s always been one of my favourite characters because he doesn’t have powers – he just has a lot of experience and a lot of training to properly assess a situation. He accomplishes his goals despite being the underdog and even in a military situation, he’s usually the guy who’s armed with nothing more than a knife and a limited number of bullets. It’s his ability to not accept the possibility of failure that stands out for me and sometimes, I wish I had his focus to make things crystal clear.

Speaking of clear imagery, Jacen Burrows has always been an artist of high regard in my experience. Burrows is a past collaborator of Ennis, so clearly, they not only have a shared history of familiarity with each other, but also a successful one – or else they wouldn’t be working with each other.

Burrows’s art is visceral and blatant. Its stark simplicity belies a complexity of detailed effort. I love it because it emulates the same style of thinking as Ennis’s writing. It’s all about the details and made manifest, these details matter with regards to the storytelling. I’m very pleased to say that I own original art by Burrows, recognizing his talent very early on. However, that does not say I’d love to own more. But, the inking by Ortego, the colours by Woodard would also definitely need to be included with any new art I purchase! It’s definitely a matched set. Rob Steen’s lettering is classic and clean, devoid of any fanciful emoting – it’s lettering that hearkens back to the style of lettering I grew up with in the 80’s, so it’s also sincerely admired and appreciated.

Though we don’t learn her name, Pronchenko’s wife is another strategic figure in this story to be admired. Aware of the assets and resources she possesses, she managed to turn Pronchenko into a bigger threat than he originally was. Though her aim was self-survival, she achieved a significant return on her investment. Pronchencko becomes a monster because of her efforts and he is a horrible character to pursue, but that makes Stepanovich’s truly just. Castle and Stepanovich are like characters which makes the international parallel not only intriguing but welcomed. Kindred spirits, if you like, finidng each other across thousands of miles to follow a similar path. It’s not only a reminder of how small the world is, but how universal the quest for justice is, and though Stepanovich is no vigilante, his objective is something that Frank Castle can appreciate, as well as readers and followers of this iconic character. Stepanovich is a truly memorable character, and even though we have it, we don’t need Frank Castle’s appreciation to confirm this fact. In contrast, Stepanovich has a dark humour that Castle lacks, and that makes him a perfect partner in his war against crime.

Yeah, it’s the details that I admire. I’ve liked strategic games for this very reason. It’s how I see life and I wish that we could teach planning and organizational behaviour because it is an art unto itself. People succeed because of the effort and detail they put into life and it’s something I’ve always admired.

Clearly Ennis and Burrows admire it too because it comes out so clearly in their story-telling.

I hope your plans come to fruition this week. Until next time.

Pick of the Week: Punisher: Soviet #5