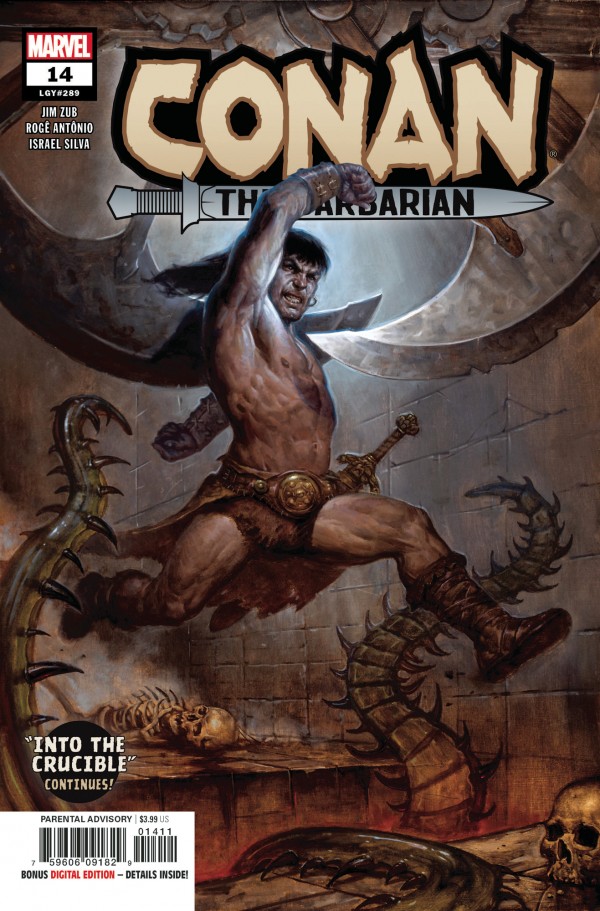 There’s fury – in this week’s reading, the fury borne out of frustration at being trapped in a situation that none of us wanted is probably best expressed by Jim Zub’s Conan the Barbarian #14. If there’s ever an expression in a comics character about using rage and pent-up frustration to get out of a situation, then it has to be Conan. In this issue, Zub puts Conan into a contest of champions where the sword of a shadowy warrior ignites all of that fiery anger to propel him, and his companions, through the caverns of the Great Crucible.

It’s a classic “swords & Sorcery” adventure, very reminiscent of the D&D adventures I played in my youth, and the same adventures that Zub is more than familiar with as well. Of course, this gives the Conan fan what he or she wants: a savage warrior with nothing but his desire to prove himself superior and bring a torrent of death to his enemies.

This tale is not done – to be continued in the next issue – but it definitely goes far to presenting the resiliency of the human capacity to use anger as a survival motivation. 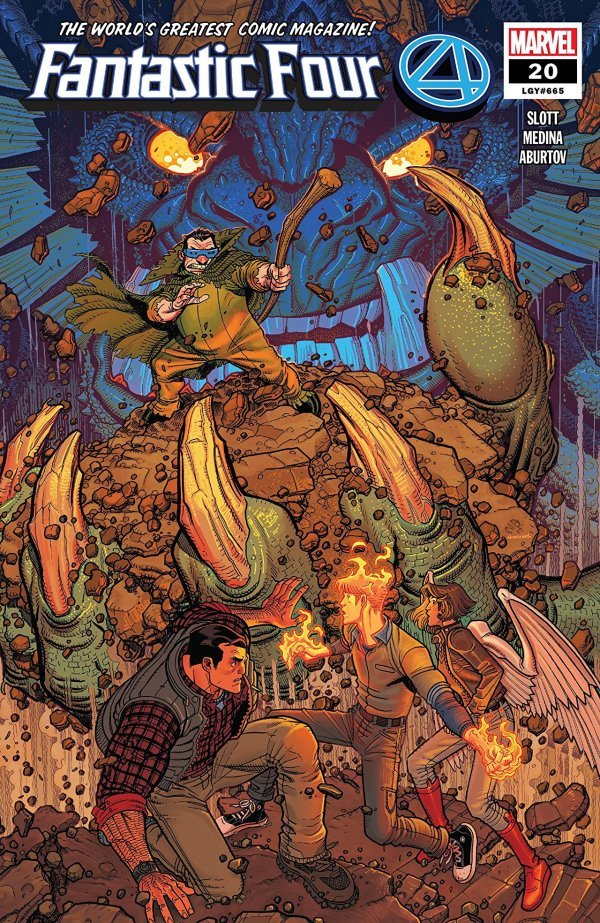 Then there’s the resolve – we will get through this. Let’s face it: we haven’t survived this long, with all the technology and science at our disposal to let something like an exaggerated flu virus to bring down what our global community has achieved. We are better than this and even though it means staying in our homes longer, seeing our friends less often and simply keeping our hands clean more than we are used to – we will survive this. Science is on our side, and that sort of determination comes out in Dan Slott’s Fantastic Four #20.

Now that the FF has returned to Earth, with Johnny Storm’s new soulmate with them, they can get back to being what they originally were: the heroes of “the world’s greatest comic magazine”! This is a one-shot story in which Johnny Storm is forced to reconcile with his “soulmate” from the planet Spyre. However, is Storm ready for a relationship? While he contends with this on an adventure with his friend Wyatt Wingfoot, it’s the last few frames of the book that show Reed Richard’s deep=seated resolve – and that really brought it home for me. I loved reading this book, and that was one of the emotional themes that stood out for me in this week of imposed, isolated reading! That’s the spirit we all need to promote. 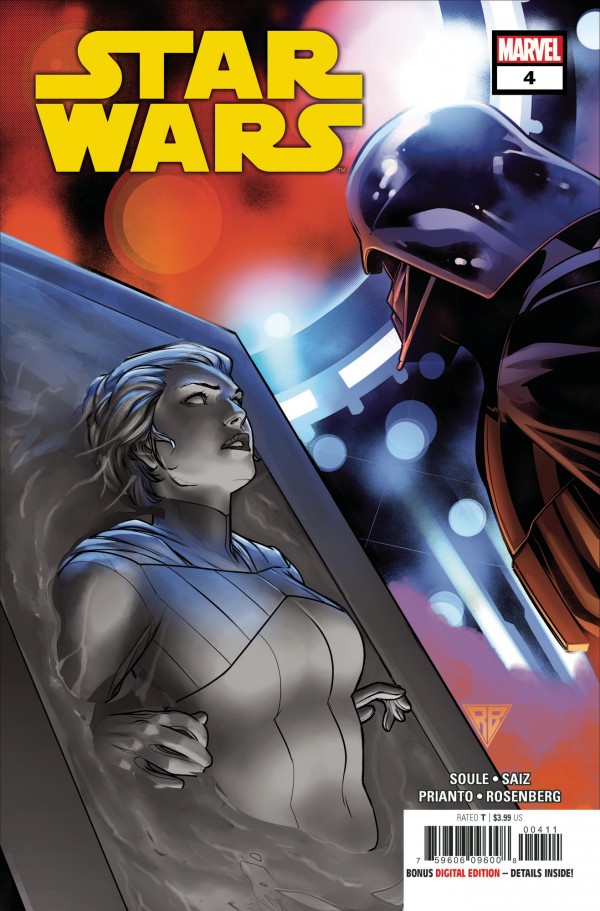 A New Hope – well, not yet, but it’s getting there, and we all know how important hope is.

Last issue, Leia was captured and imprisoned in carbonite in her and her friends’ search for Han Solo. In this issue, obviously that has to be resolved. We clearly know she survives, so don’t let the cover fool you!
Charles Soule is doing an amazing job in filling in the holes of the story in between The Empire Strikes Back and Return of the Jedi. Not only do we understand why Lando graduates from professional scoundrel to Hero of the Rebellion, but we also understand why Leia is so versed on carbonite freezing, the reason why Luke constructs a new lightsaber AND that he left an X-Wing on Bespin! I completely forgot about that!

But it’s the spirit of hope that’s present in every Star Wars story and Soule captures that story completely. That’s the spirit we need this week. 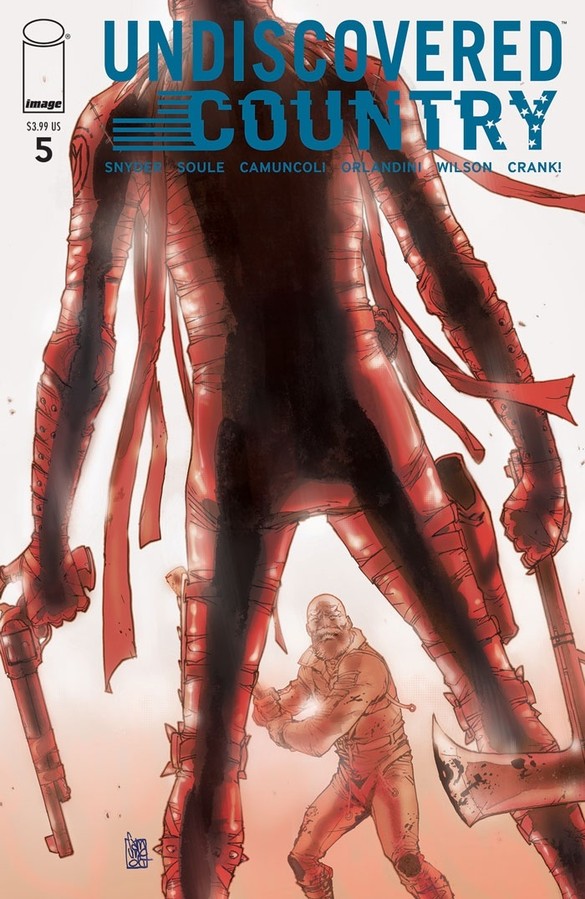 Another story from Charles Soule but partnered with Scott Snyder.

To be honest, nothing really remarkable happens in this filler issue. It really is a junction point in the story to allow greater things to happen. Such is the way of modern comic storytelling.

But there is something prophetic about this series, given that America has now literally sealed itself off to travellers, and given that the global crisis is high, we need to see a resolve that is equal to the challenge. In this story, it isn’t coming from American leadership, but from the action of individuals. Frankly, that’s the current level of messaging that’s present in this story: be considerate of one another.

The world has thrown us a bit of a curve-ball of late. However, there is strict messaging and procedure in how to handle it. Other countries who were at ground zero of the infection have now started to demonstrate how they have managed the rate of infection. We are time zones ahead of them, but given the exponential rate of infection, hours turn into seconds. But, with procedures like social distancing, hygiene practises, and self-imposed isolation for a period of time if you feel unwell, we can beat this thing.

We can also remember to be kind. Drop groceries for the elderly or the disadvantaged that you know in your neighbourhood. Make video or phone calls to your family and friends. If you are working from home or have been sequestered away form your workplace, take some time to re-connect with your family and think about ways to do joint activities with them that you didn’t have the time to do while you were working onsite. These are little things but they mean so much in the long run.

This issue is kinda like what’s going on right now. We may think that nothing of any importance is happening; it’s a filler issue that is transitioning into the next part of the story. But we see the determination of characters like Pavel Bukowski, who represent the determination to carry on in the face of evident danger. We get evidence of the bigger plan of Daniel Graves and we know something is going to change. Change breeds hope and in with Bukowski allowed to be on the wall, we know that he will get the chance to make a change for himself.

That’s what this week is all about, folks. It’s the belief that people will know the right thing to do. We’ll get through this situation, but we just need to listen to those who know what they’re talking about and do the right thing when it matters.

In a global crisis, it’s the actions of individuals doing the right, informed thing that matters.

Undiscovered Country #5 is the pick of the week.

Let’s believe in the positive power of individuals as we make it through to the next week. My best wishes are with you.

Pick of the Week: Undiscovered Country #5