I wish we had a more direct connection to the editors on the books we review. Not only would they provide greater insight into the machinations of the overall publishing direction of the stories that get printed, but clearly, they’d have greater insight into the inner workings of the creators. Thanks to Nick Lowe for validating my decision to choose Punisher: Soviet #6 as the pick of the week for this week’s review. 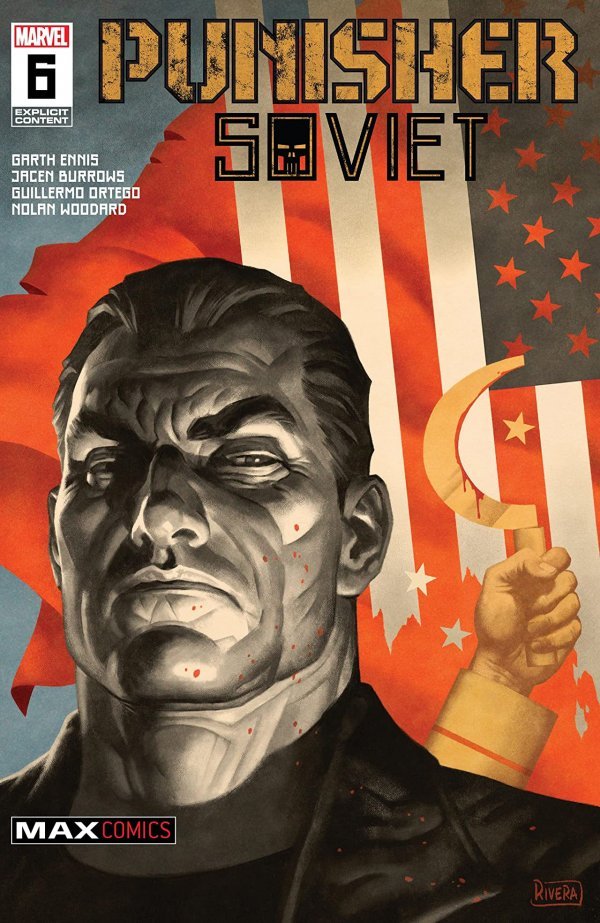 Let me explain why.

The Punisher is a character who does what he must. I respect that. Dedication to an ideal is a double-edged sword. Sometimes it can cut sharp like a sense of fanaticism, but it also cuts true. In this case, the truth is on Frank Castle’s side, and Nick Lowe gets that. While Garth Ennis and Jacen Burrows have always had my respect, and this final issue in this series is truly an explosive conclusion to a deeply felt story, I love Nick Lowe’s comments at the end of the book in which he describes the emotionality and difficulty of this story.

To be honest, Lowe doesn’t say anything that I haven’t already said about Ennis’s work in the past. He talks about Ennis’s exhaustive research; he alludes to his immense knowledge about militaria and how Ennis knows this character. But, while I am not claiming “I-Told-You-So” credit here, I am glad about the validation. If a guy like Nick Lowe is essentially reinforcing my conclusions. So, I guess Lowe should get the credit for telling me so.

There’s also a discipline in this comic that has to be respected and I think we need more of that in society, but I’ll talk about that later. In the last issue, the Punisher’s Russian double, Valery Stepanovich met a gruesome end in sacrifice for Frank Castle to continue the mission. Stepanovich’s dedication to his mission shows a lot of that discipline as well, which is something that Frank Castle can respect and appreciate. While it isn’t his mission, he could see it being one that he would choose. There’s a “brothers-in-arms” spirit that gives way to discipline in that issue too, and that sentiment sets the reader up perfectly for the final issue as well.

In this issue, what the Punisher does, requires both respect for Stepanovich’s mission as well as a great deal of discipline in holding to it out of loyalty to his comrade. Even though he was a Russian soldier in a Russian campaign, there is a shared sympathy for his Russian brother’s plight. He takes on the mission as if it was his own.

While I don’t want to give away the comic, it’s enough to say that the results require grim resolve to see the mission through – and that’s why Frank Castle will always be one of my favourite characters.

For instance, take what’s going on in the world right now. We need discipline to see us through what our governments require of us in order to defeat this disease. After all, we’re only being asked to stay at home, stay away from each other and be patient. If Frank Castle can adopt another, foreign soldier’s mission, then we can certainly take on one for our own well-being and safety. Given that the virus has a far-shorter life-span than ours, we have the patience and endurance to wait it out. The Punisher has a resolve that we can emulate.

As for emulation, what I really like about Jacen Burrows’ art is its gritty, in-your-face brazenness. It’s so clear and honest that it communicates aspects of the story in a brutally “Frank” way. Burrows has a gift for presenting violence in all its brutality. If there is a part of the story that requires visualization of pain and torture, then Burrows is the artist for the job. It’s an odd thing to be good at, but Burrows knows how to show pain. In this issue, and with Castle’s resolution of the situation, Burrows is the artist needed for the job.

In this time, we have to trust the people who must do what they must – after all alternatives have been exhausted first, of course. But, we trust our first responders, our frontline workers, our emergency personnel, and in my country, I am confident in trusting that my government is on top of this thing and I am following their guidance. I know we’ll get through this, but there will be a lot of deaths and that’s why we require the discipline to see it through. We can’t afford to take this threat lightly, and the Punisher never underestimates the threat that confronts him.

I understand discipline and that’s what drives Frank Castle. Like Nick Lowe says, Franks Castle is a difficult character to write, but Ennis also gets that quality of the Punisher which makes him successful in telling these stories.

Punisher: Soviet #6 is the pick of the week. It’s got discipline, resolve and the will to see something through.

May you have that same resolve as we see our way through this global crisis. Stay safe and stay away from each other.

Pick of the Week: Punisher: Soviet #6