Milestones are important in a person’s life. They are the historical markers that measure the passage of our lives, broken up into episodic achievements. We measure our lives by these achievements: the first kiss, the first job, whatever; these things help to shape our lives by punctuated moments of celebration that help put our lives into context of serial happiness.

That’s Detective Comics #1000 and it’s the pick of the week for this week’s list and it’s an ensemble of talent ranging from the classic creators like Denny O’Neill and Neal Adams to the modern torchbearers like James Tynion IV or Scott Snyder or my pal, Greg Capullo. Let’s take a look at the stories that make up this ensemble of one-shot delights. 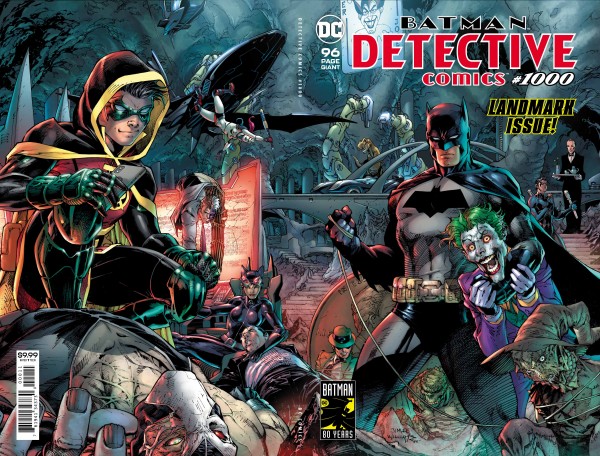 “Batman’s Longest Case” by Scott Snyder, Greg Capullo, Jonathan Glapion, FCO Plascencia and Tom Napolitano is a bit of an appetizer to start off this sumptuous collection of tales. You can tell that Snyder and Capullo were having fun plotting this story as the Batman travels to various parts of the globe in search of a puzzle that has eluded him for years.

This story highlights one of the most important facets of the Batman’s character: his unwavering dedication to solving a case. All of the greatest Batman stories are about his refusal to be defeated by a crime. At his root, the Batman is a detective, not a super-hero. He doesn’t defeat super-villains. He defeats people. Bad people, to be sure, but he gets a sense of reward out of saving people but a personal sense of satisfaction from solving crimes that can’t be solved.

In this story’s resolution, the Batman’s sense of satisfaction gets an even bigger boost with a reward that only he can appreciate. Far be it for me to spoil the story ending, but I think you’ll agree that this is a great opener.

“Manufacture for Use” is a wonderfully poignant story from Kevin Smith and Jim Lee. With Alex Sinclair on colours, Scott Williams on inks and Todd Klein providing lettering, we are given a story that delves into the deepest reaches of Batman’s past.

We are given a unique insight into one of the fundamental objects that caused the Batman’s birth. This object is not destined for a collection though, but rather a new purpose that serves as a re-dedication for Bruce Wayne to his unending war on crime. It’s quite the parallel to Smith’s own life as he has gone through a transformation of sorts that is almost like a re-dedication to life.

It’s also a touching story. I didn’t realize that Kevin Smith could be that emotionally deep.

This is a hilarious look at the clumsy ministrations of one ineffective ministrations of a loser henchman from the various perspectives of Batman’s greatest villains. Each recounts his or her encounters with this useless lump of an associate who always figures prominently in their defeat at the hands of the Batman. Of course, as is usually the case with these one-shots, the surprise ending at the conclusion of the story is definitely worth the read.

“The Batman’s Design” by Warren Ellis and Becky Cloonan takes us on a bit of a meandering meta-story as we are given a look into the Batman’s thinking in the course of his pursuit of criminals. The Batman just doesn’t think about criminals and their methodology; he studies it to the point where he can anticipate a move in advance, prepare a speech that will enter their minds, destroy their confidence and reduce them to more than just a moment of hesitation. He can bring them down to a ruined state of self-doubt and in this way, he defeats them within their own thoughts.

Jordie Bellaire provides the colours and Simon Bowland gives us the letters for this story.

The legendary Denny O’Neill (who I was just privileged to meet at Toronto Comic-Con a couple of weeks ago) teams up with Steve Epting to bring us back to where it all began in “Return to Crime Alley” with Elizabeth Breitweiser on colours and AndWorld Design providing lettering.

We see the contrast between one of the nurturing influences in Bruce Wayne’s life, Leslie Thompkins and the person she sees he has become as the Batman. O’Neill gives us a timeless lesson in compassion and understanding over the Batman’s desire to punish the evil. It’s a classic look at human nature and we are reminded why O’Neill is one of the greats.

Neal Adams and Christopher Priest give us “Heretic”, lettered by Willie Schubert and coloured by Dave Stewart.

This is a bit of a throwback story to Neal Adams’ time when we saw the Batman learn Eastern philosophy and incorporate the wisdom of the culture of the League of Assassins into his origin story. But. There’s nothing wrong with a little bit or re-visiting history, especially when it’s provided by one of the Batman essential creators.

It’s brief but it’s Adams. What more can you want?

Brian Michael Bendis’s “I Know”, with visual art by Alex Maleev and Josh Reed’s letters, is a story of the Penguin’s final revenge on Bruce Wayne far into the future of both of these two enemies. The Penguin knows Bruce Wayne’s secret and has outlived all of his enemies to finally cash in on this secret and prove that he is worthier than all of them put together.

That includes the Batman as well.

Dark and very Burton-esque in its presentation and its humour, this is probably one of the simplest and most entertaining stories in the collection.

“The Last Crime in Gotham” by Geoff Johns and Kelley Jones, coloured and lettered by Michelle Madsen and Rob Leigh is another speculative look into the Batman’s future where we meet his family and discover what sort of a city Gotham has become.

I found this one a little too brief and fairly unremarkable, I hate to say. It was too abbreviated for the significance to be noticed. But who am I to criticize Geoff Johns?

“The Precedent”, however, was very remarkable. With its stark and clear pencilling by Alvaro Martinez-Bueno, Raul Fernandez’s inks, Brad Anderson’s colours, Sal Cipriano’s lettering and an incredibly meaningful story by James Tynion IV, we get a story that spotlights one of the most positive things the Batman has done.

Dick Grayson becomes Bruce Wayne’s ward and while this may seem a part of the partnership between Batman and Robin that we take for granted, the reasons behind it are more than just taking a partner, it’s saving a life. Grayson has the capacity to become a better hero than Batman, one borne out of a noble reason, making a nobler person. It’s a great story and definitely ranks as one of my favourites.

Tom King, Tony Daniel and Joelle Jones give us “Batman’s Greatest Case”. While it may seem to be a fairly unexciting title, it’s a story that is entirely Tom King. King dwells on family relations and how the bonds between those who are family or as close to family affect our perceptions and decisions. Sure enough, in this we get a story that underscores the importance of the Batman Family through family bickering, personal jokes with each other and a sullen Bruce Wayne contemplating the importance of these people as they figure prominently in resolving his greatest case.

What’s the resolution to this case? Well, far be it for me to give it away, but it’ll become apparent to you as you read it.

All of these stories celebrate the 80 years the Batman has been around. That’s a great achievement; that one character can be this timeless and provide as much entertainment as he has, we need to take a bit of time and be appreciative of the many creators over the decades who have contributed to this legendary character.

The Batman is really a metaphor to the great mystery of life that we all have to figure out. But instead of great detective skills, we need patience to see things through, good relationships in our lives to fall back on when times get rough and more than anything, an enduring desire to see things through to their conclusion.

But – we need to find those moments of happiness and satisfaction in order to put it all together in a context that helps us to define ourselves. For me? I define myself by the happiness my accomplishments can give me.

Until next week, here’s hoping your accomplishments bring you as much joy!

Pick of the Week: Detective Comics #1000