You know, those closest to you can let you down. It’s sad, it’s sometimes painful but it’s also inevitable. Friends, to many folks’ surprise can be jerks.

That’s a universal experience that writers draw upon. It makes for the most poignant of dramas and the most relatable of stories. Readers can sink their teeth into these sorts of stories. So, of course, that’s what I’m looking at in this week’s comic round-up. Let’s get to the list.

This is a one-shot that looks at what happened after Mephisto sent Johnny Blaze to his death in Damnation #2. Have to say, while I’m only mildly entertained by the Damnation event, wanting to know what happened to Johnny was an itch I needed to scratch. After all, he is a demon and who else better than to let you down than the demon you’ve known for all of your adult life?

But this story is a beaut. Like an evil spirit rising from the flames of Perdition itself, Ghost Rider and Johnny Blaze need to climb their way through the nine layers of Hell. They are separated by Mephisto, meaning Blaze is without his powers and, yeah, that’s a serious double-cross. But, the Spirit of Vengeance that is the Ghost Rider doesn’t really like Johnny too much anyway.

Christopher Sebala and Phil Noto manage a surprising … Hell of a story as we see both sides of the Ghost Rider find grudging respect for each other. Johnny’s human determination coupled with the Ghost Rider’s thirst for vengeance make for a pretty good combination allowing the two to make their way back to the top. I have to admit, the final scene, though a bit under-displayed, justifies the entire story meaning that sometimes, you can rely on the devil himself. 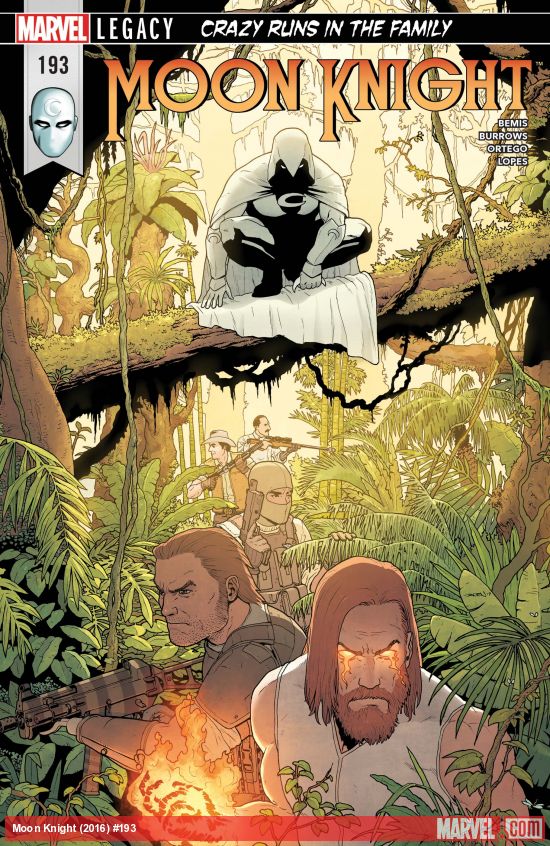 “Crazy Runs in the Family” and like family, sometimes you can depend on crazy. Let’s face it: if you know someone acts aberrantly, particularly family, then you know there is something you can rely on. I mean, whose family doesn’t have someone with some well-established quirk or something a bit more unforgiving, like a strongly developed streak of narcissm? Every family does.

Marc Spector needs to believe in something in this issue. He’s facing Khonshu’s nemesis, Ra, and his sponsored champion, Sun King. But Moon Knight has his newly-discovered family and daughter to protect and what I liked about this story from Max Bemis is the fact that we all have to dig deep inside ourselves in order to come up with the conviction that you are the only person who can’t let you down. Others might, but when you have people depending on you, it’s important to remember that even though they need you, you need them to need you.

A little convoluted analysis there, but with the Moon Knight, analysis is needed. Still, it’s a good end to the story and Jacen Burrows draws insanity so chillingly well. 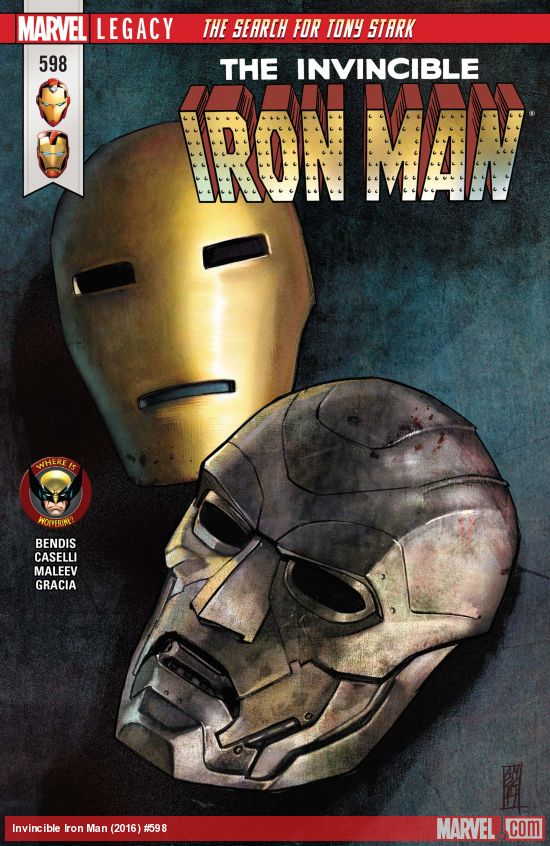 The switch between two different artists’ styles is really jarring in reading this book. Stefano Caselli and Alex Maleev share drawing duty, but Maleev gets Doctor Doom. It also doesn’t help when the story is dragging too long. To be honest, I wish they’d get to the point. Everyone seems to be looking for Tony Stark (even though Las Vegas has literally gone to Hell and the Avengers are suffering on two fronts – continuity, where art thou?) – it’s falling to Riri Williams and her band of techno-sages, including long-time favourite of mine, Madison Jeffries (I miss Alpha Flight, guys).

Riri Williams has an open offer to work for SHIELD under the protective auspices of MIT, which seems like a good enough pretext for me, but to be frank, I’m really not entertained by her character., so its thrill doesn’t appeal to me.

The little hints and dead-ends aren’t enough to make this a compelling read. Though I do confess to a curiousity to see if the so-called “Armor Squad” (ew) will actually find Stark, I don’t know if I can afford to wait another two issues before the grand finale of #600. We’ll see – I’ll probably do it because I’m weak – but at least I’m dependable. My advice? Hold off and wait until #600. 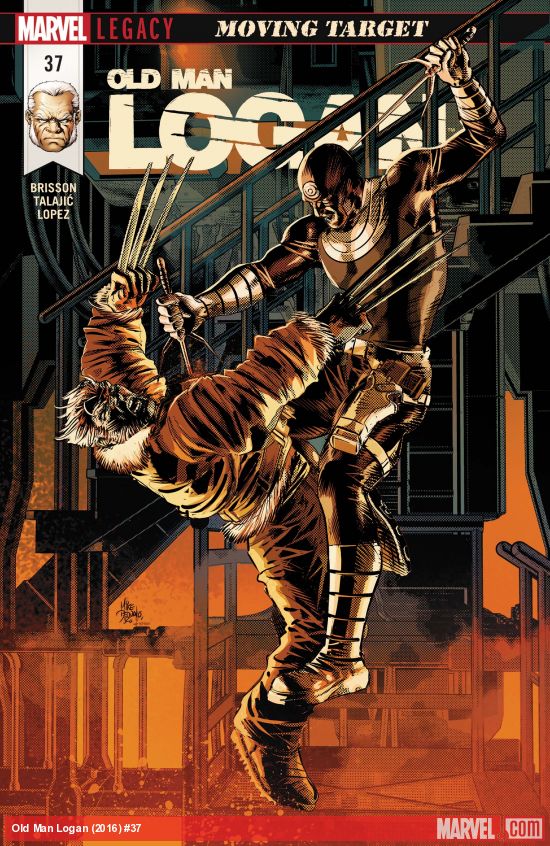 Yeah – I’m loving Ed Brisson’s work on this character. Originally I thought that Old Man Logan wasnothing but exploitive. But – seeing Logan struggle with his diminishing healing factor as he still tries to be a hero is what all Marvel heroes should be about: the struggle. And Brisson has made me want to invest time in this character.

Heroes can’t depend on anything, and Wolverine’s typical schtick was that he could always rely on his healing factor to get him out of any situation where the odds were stacked against him. Not this time. He’s literally almost died from his wounds in every second or third issue of this series, and I love to see him work for his mantle of heroism.

Sounds kinda sadistic of me, doesn’t it? But I’m of old British background in which it was understood that suffering was good for the soul. The more you fretted or worried over a situation, the more diligent you were in trying to resolve it, and that would pay off in the end.

I’m not crazy about Dalibor Talajic’s art in this book. It lacks a certain amount of detail and I find it fairly bland. But it’s comprehensible, doesn’t confuse the reader and it’s serviceable. So, it works.

Still, what a hell of a fight between Bullseye and Logan! I loved the choreography and how Brisson managed to illuminate Logan’s weakened state and how Bullseye manages to use his abilities so effectively. It’s probably one of the best close-combat fights I’ve seen scripted, but with a character like Wolverine, even though he’s not at his best, he’s still the best to write. Great action and a great story. 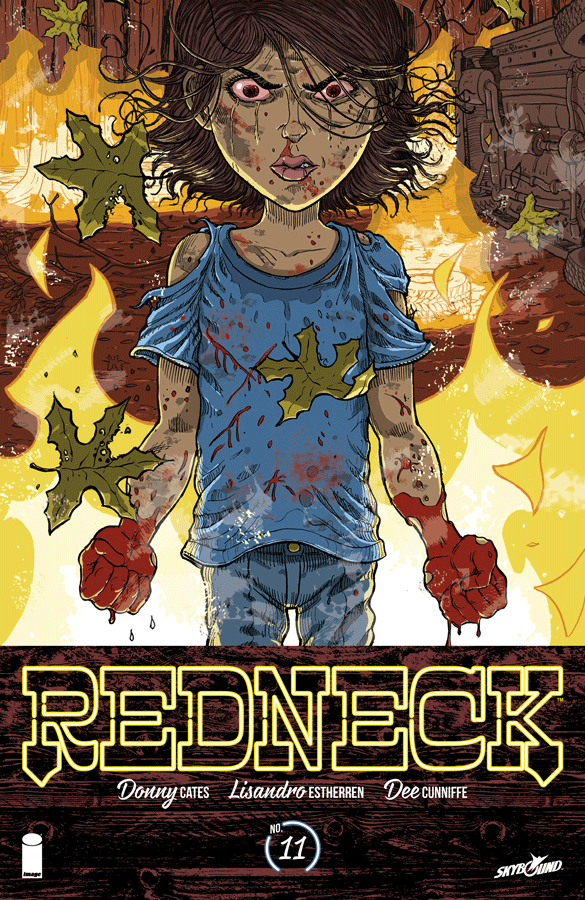 Lots of sadness in this title. I mean, it’s hard to jump in at a later comic. You really need to know the dynasty of the backwoods, country-holler vampire family that Donny Cates has created in order to fully appreciate the significance of this issue. When you have a character questioning his beliefs and his faith in his family at the very beginning of the story – and to see those hopes and dreams literally raped from him – then you get an idea of the amount of character dynamics in this book.

And it all falls back on family.

Sometimes family lies to protect itself. Sure enough, we see the uncovering of a lie in this story that will have drastic repercussions for the rest of the series. It’s a very emotional story when you get to the bottom of it, but I have to say, this would be a story that’s best appreciated in a hardcover collection in order to accept the full value of its emotional impact. 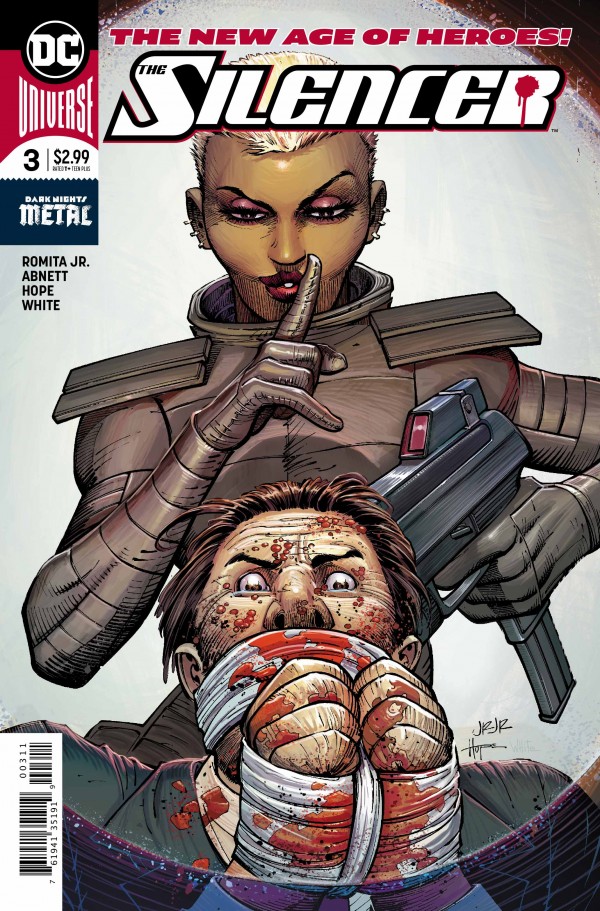 A tale of a mother’s love. In this case there’s no way that this mother would ever abandon or turn her back on her kid, but the fact that she finds herself embroiled back in the life she thought she had left behind may let her kid down regardless.

The Silencer is an action-packed offering from Dan Abnett and John Romita, Jr. that is a pretty damn fascinating hi-tech ex-mercenary story. The fact that it’s also featuring a female lead makes it a book that will definitely get some interest from some television executive hot to jump on this new emerging trend in comic-inspired television.

Definitely worth the trip to the LCS. Oh – and you have to love the cameo appearance of everybody’s favourite super-powered DC merc! 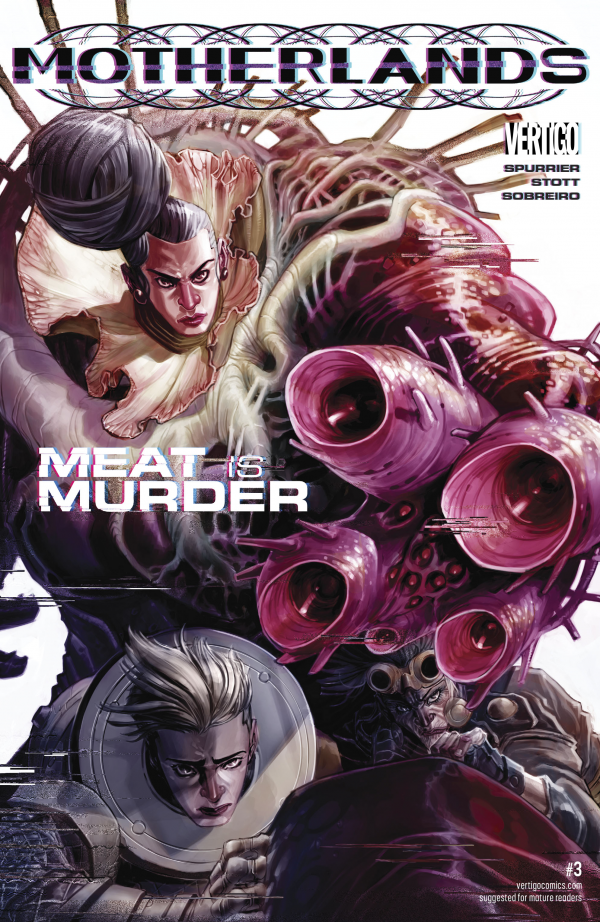 Just a thoroughly outstanding and unique book from Vertigo. I’m loving this story, not only for its immersive fantasy but also for its irreverence in humour and character relationships. This is a complex story between a resentful daughter and her washed-up superstar mother. Set in a science-fiction setting that’s right out of Moebius, this book captured my attention from the get-go.

As Tabitha and her mother continue their search for their missing brother and son, not only do they reconcile their past with each other but they also see new abilities in each other they didn’t see before. It’s a new phase of respect and though they are painfully aware of how they let each other down, it’s brilliant piece of character writing. Si Spurrier and Rachel Stott have a winner in this book that’s destined for some hardcover glory. This would be a beautiful one to collect.

I have to make this one the Pick of the Week. It’s not just a great story, but it’s also one of redemption. I really believe that our friends can let us down. Speaking form personal experience, but at the same time I also have to believe in forgiveness. It’s a hard concept for me though, growing up in a Scottish household where the worlds “they’re dead to me” often factored in navigating relationships. But we are told we should aspire to forgiving, and this story shows us the harsh pathway to that state of mind.

Heh … I can’t do it. I get that from my own mother who could be just as hardbitten as the Sylph.

But in the end, we have to be prepared to run the risk of out friends disappointing us in order to achieve that higher state of being.

Of course, I think it’s just easier if I just don’t let my friends down, and expect them to do the same by me.

That’s just me though; hope I haven’t disappointed anyone.

Pick of the Week: Motherlands #3