You ever felt like you can’t possibly meet all your deadlines and you have too much on the go? The overwhelming sensation of having too much to do and not enough time to do it is a major cause of stress in our house, and this week in particular is one in which I am cramming a tremendous number of things in before Toronto Comic Con this weekend and a trip to Ottawa and Orlando. Yes, you can’t two locations that are more diametrically opposed in nature and location, but this is the challenge for this week! So, of course, I am keenly looking forward to reading this week’s selection and sharing it with you. So, without any further delay, let’s get to the list before I pop a blood vessel! 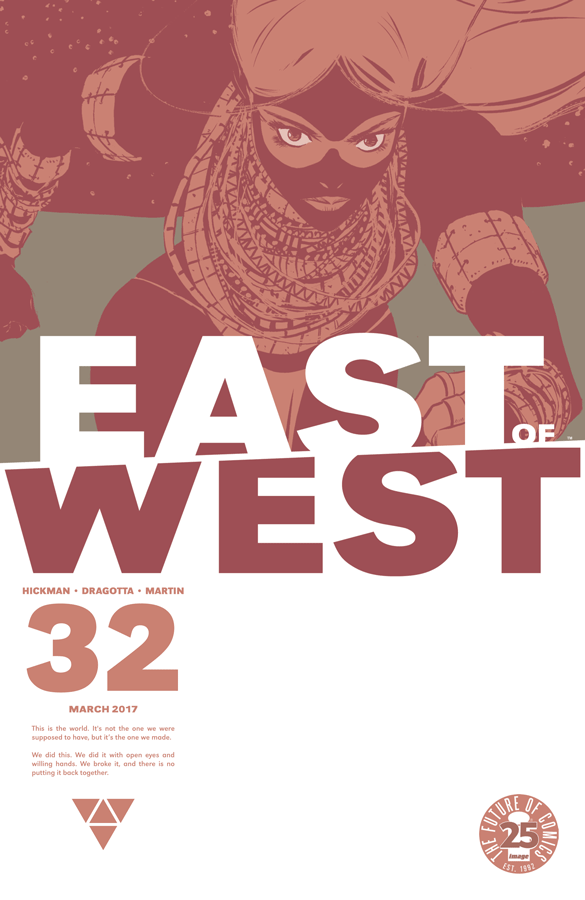 What a chill I got from reading this issue!

If there is anything that I admire about Jonathan Hickman and Nick Dragotta’s magnum opus is the extremity of the characters they have created. These are creatures who have sold their souls for a slice of power in this fractured world they have warped. Everything is corrupt, including history, but the leaders of this deviant society are so frighteningly realistic that the detail compels the reader to pore over each frame with rapt attention to see what is so different from our own society.

This issue is a wonderful spotlight on President Archibald Chamberlain, the puppet master President of the Confederacy where we get to see him openly pulling the strings of his puppets and setting machinations to work. He is a devilishly cruel politician and the description applied to him by King of New Orleans, “who would ever believe that the most dangerous shot around would turn out to be an even deadlier politician?” fits him perfectly. Talk about a full schedule …

The sense of danger and evil that emanates from this character is enough to run shivers down my spine. I’m dying to see the resolution of this series, but I have to confess, I also don’t want to leave this twisted carcass of a world for fear of seeing what other evil Hickman and Dragotta have in store for us. 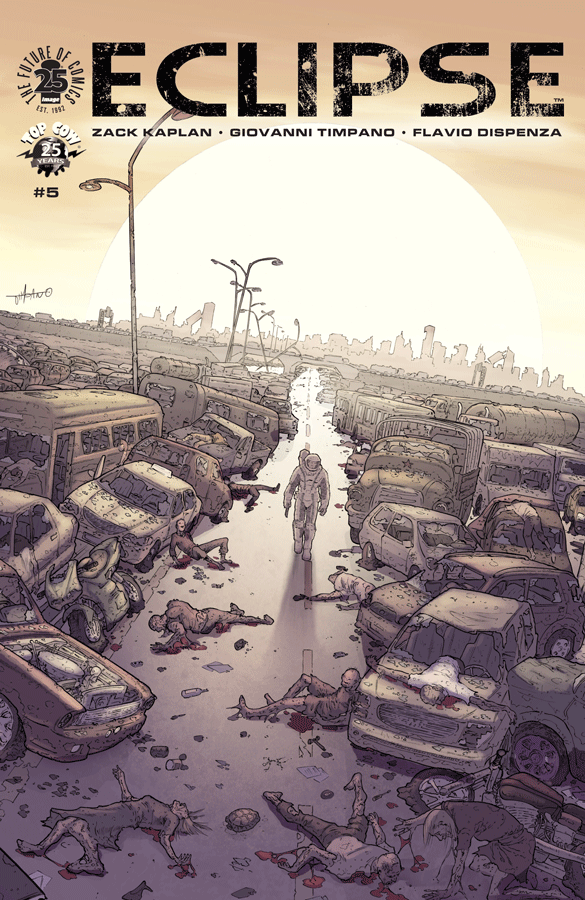 Zack Kaplan’s storytelling takes on a new perspective in this issue as we begin to uncover a new layer in this post-apocalyptic world. After the threat of the sun-immune priest has been put down, there is a new mystery to solve, namely: where did he come from?

It’s a new arc and it while starts off a little bit haltingly as we become more familiar with Cielo/Rose. However, Eclipse wasn’t meant to continue a second arc as Kaplan explains in a column at the end of the issue; more that it was meant to be a mini-series. However, the fans provided enough support to be heard and we have a new arc.

It’s a fascinating premise to see how humanity can survive when the source of life itself, namely the sun, is now the very thing that threatens all life on Earth. Kaplan has a clear vision in which this story can take place and does an excellent job of describing it for us Reinforced by Giovanni Timpano’s ethereal artwork, it’s a great pleasure to read this book. 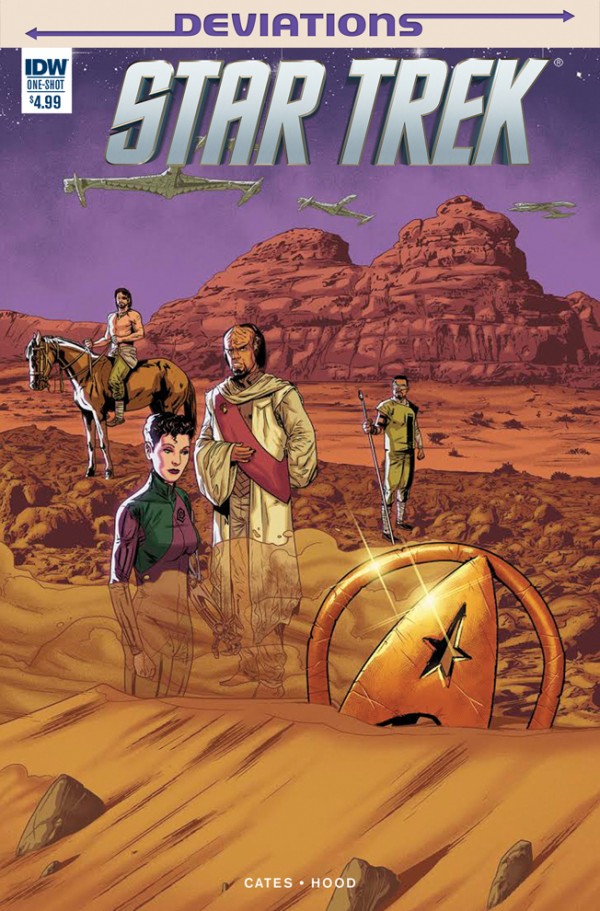 Nobody loves alternate universe storylines than me and this one is a fun one. Now to be honest, I have to admit that I’m a bit jealous over this one. Editor Sarah Gaydos has given writer Donny Cates a chance to pitch a story about an alternate universe of Star Trek. I don’t know how what bribes were offered or what small animals were sacrificed to make this happen, but I confess to wanting to know the secret behind it … so that I can take it for myself.

I need to explain this one briefly. Think about an alternate version of the The Next Generation in which the Romulans made first contact with Humanity instead of the Vulcans. Got your attention? Good, because then the premise of the Next Generation becomes one of resisting Romulan oppressors and Humanity reclaiming its place amongst the stars.

It’s dirty, gritty and Will Riker looks like Snake Plissken from Escape from New York, but damn, it’s a lot of fun. It’s an amazingly fun storyline and Cates does a great job of presenting to us an alternate universe that we can have fun with.

Josh Hood provides the artwork for this book. At times, the character proportions seem a bit off – like it needed a little more editing, but it’s serviceable and his depiction of starships and other mechanical objects and technology that die-hard Trekkies would recognize is spot-on.

But again, I’m jealous. It’s a unique story angle and a lot of fun; it’s something that I would have loved to play with, myself. Damn it, Sarah Gaydos – when’s it going to be my time? This one definitely gets my honorable mention for this week. 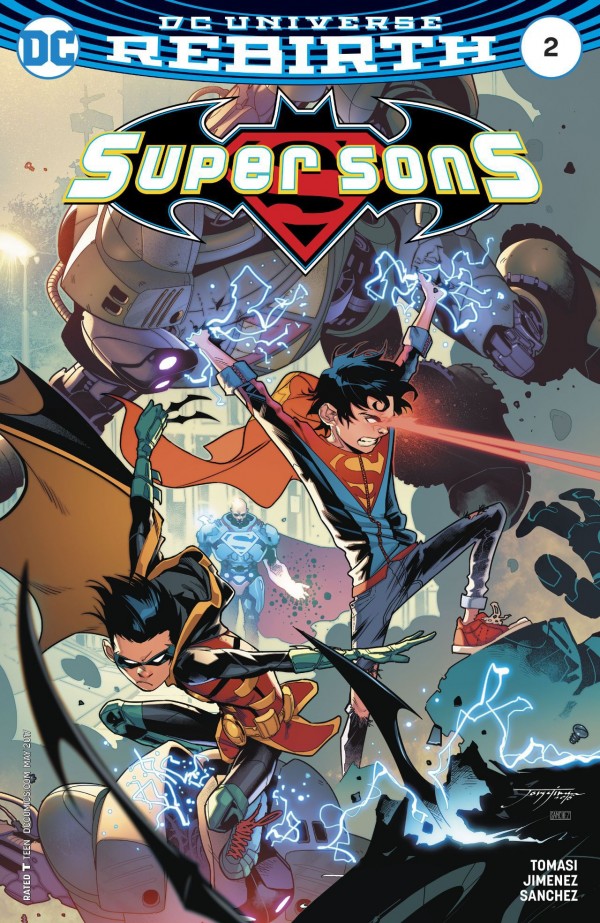 Wow … it’s a clear reflection of my age that I’m loving this book. To be honest, the Rebirth version of Superboy really didn’t do much for me, and neither did Damian Wayne. But in this context, together in a partnership, this book has a heck of a load of appeal for me. Maybe it’s the fact that I’m a parent and to see the sons of the World’s Finest work together, albeit reluctantly, has the recipe for a really cool story.

The aspect I like about this though is that it has the potential for a really good friend story. Think of this as a super-powered “Tom and Huck” story for the 21st century. Both are cagey and smart kids, in their own way but to see them overcome challenges despite their irritation with each other’s less-than-amiable qualities is actually quite light-hearted and enjoyable; particularly when one of those obstacles happens to be Lex Luthor.

Actually, the scene where Damian Wayne is able to hack LexCorp security and protocols, I had to admit to a bit of approval. After all, who do I hate more – Damian or Lex Luthor? Yeah, it’s that type of dynamic that makes this book work quite well and Peter J, Tomasi and Jorge Jimenez have done an excellent job of storytelling with this book. 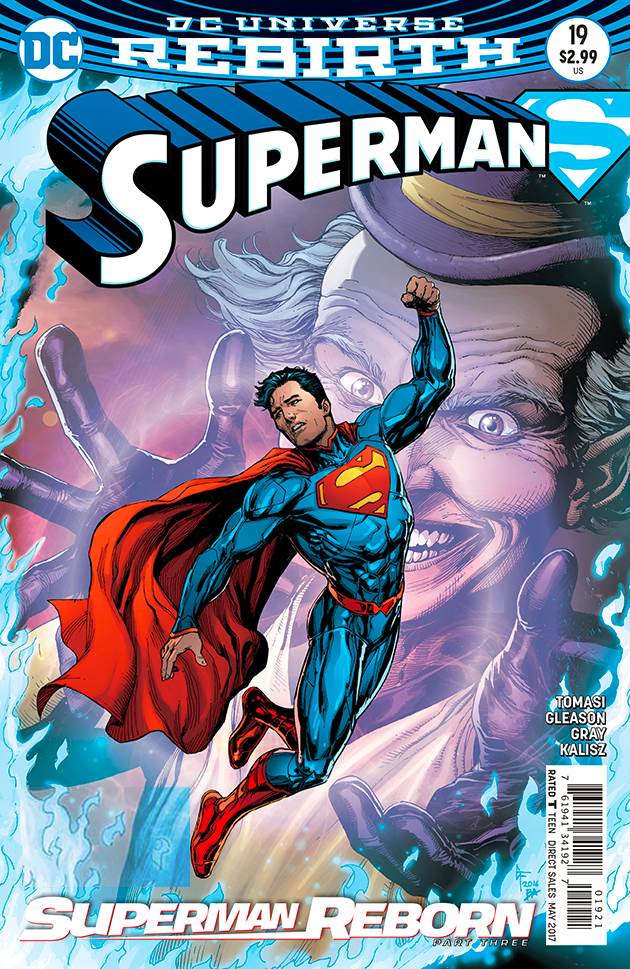 Tomasi and Patrick Gleason team up for this one. This issue also has Tomasi focusing on Superboy and he managed to tap into that parent vein again with the worry that every parent has about protecting his or her child.

I can’t say I was overly fond of Gleason’s artwork. It’s not like I can put my finger on it, but I found the art somewhat reminiscent of Chuck Jones from Looney Tunes. Does that make sense? While it’s fine, workable art, I just didn’t think it fit the emotional nature of this story.

The surprise reveal of an unexpected guest villain in this story was also a plus for me. I haven’t seen this little imp in a long time and of course, it totally fit what was going on in the Superman universe! I was just disappointed with myself in that I forgot to think about it. 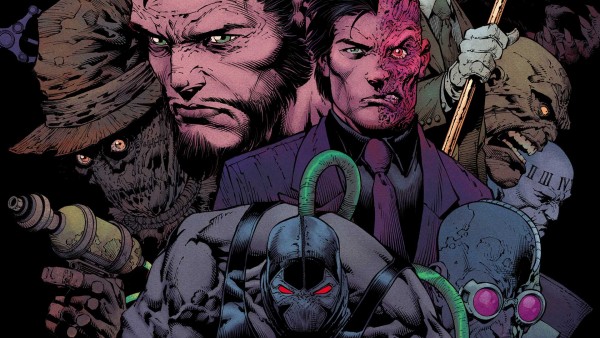 … And the epic struggle continues in “I Am Bane”!

Just when you think that the contest of wills can’t get any more intense, Tom King ramps it up … JUST … ONE … MORE … NOTCH!

Nothing is going to get in the way of Bane as he makes his way through the maze of Batman foes to get to the Psycho Pirate. But Batman puts a few more obstacles in his way; to say: releasing and arming every criminal currently in residence!

This is a gripping, penultimate issue leading up to the final confrontation between Bane and the Bat. The story proceeds at a breakneck pace as Bane literally pummels his way through the book. It’s a very powerful and intense storyline that’s made better by the graphically raw talent of David Finch. Muscles bulge, teeth are clenched and readers can feel their heart rates accelerate as they turn the page until they finally see … well, let’s just keep that surprise on the backburner until folks have had a chance to read it for themselves. Suffice it to say, that there is a real power behind this book and King and Finch have made it one that can’t be ignored.

Of course, it should be no surprise that Batman #19 is the pick of the week for this week’s review! I am loving the intensity of the story along with the very frightening possibility that Batman might have discovered his limitations in this encounter. While we saw in the last issue that both Bane and Bruce Wayne had comparably similar stages of development, but evolved into completely opposite results. Bane is raw power personified while Batman is intellect. The ultimate contest of brains versus brawn will be decided in next issue, and I, for one, cannot wait for the outcome.

That’s it for now! It’s been a busy week, but an exciting one! Hope yours isn’t more than you can handle!