Time … it hold its own rule and it waits for no-one. We only have so much of it throughout the day. My time is taken up with getting my kids ready for school in the morning, working for the bulk of the day and ten coming home to the warm bosom of my family. I learn about my kids’ days, I touch base with my wife and then we have supper together. In the evening I take my oldest to her karate class and also make sure that I read to my youngest and tuck her into bed.

When do I read my comics? Usually between 9pm and 1am. Yeah … I write my reviews in that time and I can be honest … though I do it for the love, it’s still time that I could use to grab an early night!

Still – let’s take a look at the titles that are keeping me from sleep tonight! 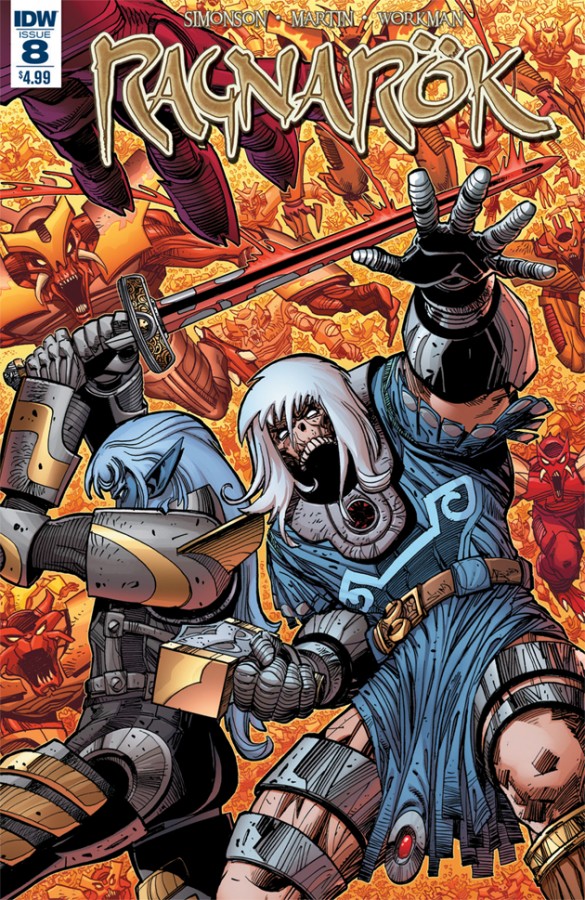 Action-packed and mythologically proportioned. It really is the stuff of legends and is one of the few books I start drooling over whenever I hear it’s one of the Wednesday titles I get to look forward to reading.

I’ve always been a Simonson fan. I wish I could declare myself his number one fan, but the truth of the matter is there are fans out there who are more devoted than I am. Still, I buy his books and write nice things about him; I figure that’s the best I can do.

Hey – my daughter also loves him too and a child’s devotion is probably the most honest criticism available!

This has to be the best issue I’ve read so far. Everybody likes a team-up and Regn and Thor join forces to defeat a legion of Fire-Demons … it’s nothing short of spectacular, filled with all sorts of Simonson trademarks: the explosive effects, the onomatopoeia and the one hero who embodies Norse heroism. Of course, Simonson’s a master and this issue demonstrates why. 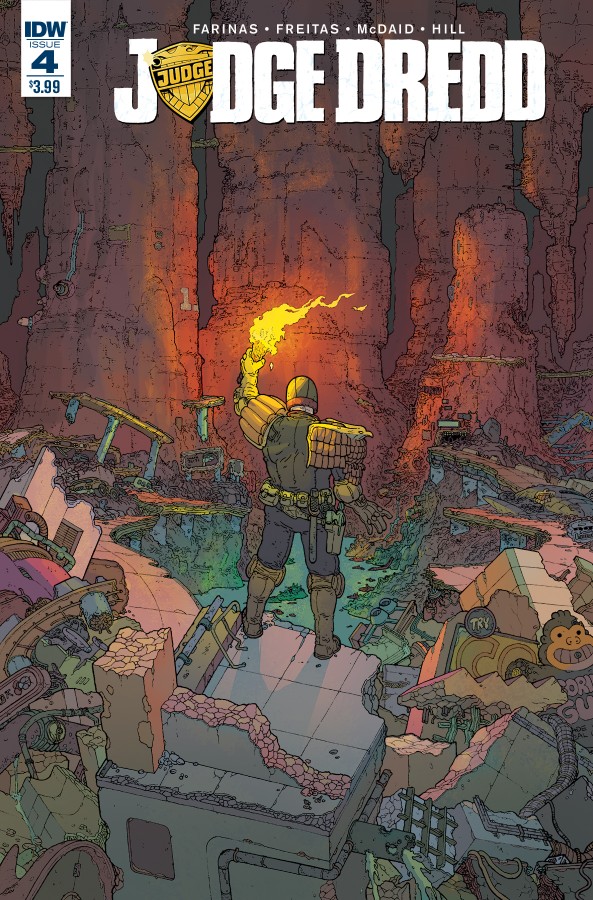 It’s an interesting idea: take the judge out of the city and see how he fares. Of course, Judge Dredd has been out of the city before – in the Cursed Earth. The problem with a limited worldscape like Dredd’s is that everything pretty much has to happen within the city – unless you want Dredd traversing throughout radioactive desert for about five or six issues. Oh wait – they did that already back in the 80’s.

Of course, writers Ulises Farinas and Erick Freitas and artist Dan McDaid have clearly already remembered that storyline and have taken it one step further and advanced Dredd in time. Well, if it hasn’t been admitted yet, then that’s where it clearly is. Four issues in, if that hasn’t been understood, then at this point that’s where we are.

Dan McDaid is a fellow Scot, so I’m obliged by Highland Clan duty to pay heed to him. He has Dredd qualifications so I’m inclined to acknowledge his work in that it’s very inspired by the 2000 AD books that I grew up on. Dan McDaid … you and I probably went to the same type of school.

Anything Dredd is good. I’m happy to see Dredd appear in another form so this is welcome to me. 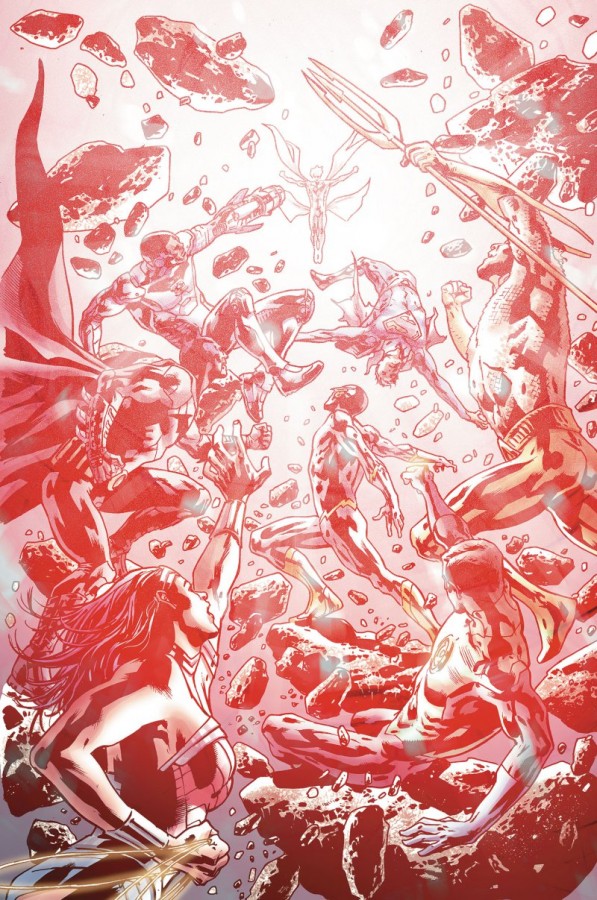 Why am I still reading this? With no dialogue in the first five pages, this is like a Zack Snyder-lite, with the clash of gods.

Still, this is eight issues too long to get to this point. Rao is a typical over-powered villain who has a connection to the followers he has managed to beguile. The objective is simple: remove the link, and you have him. To be frank, there’s really nothing surprising about this storyline. I will ask the question though: what happened to Green Lantern? He’s still stuck in Krypton’s past. Did I miss an issue?

Hitch does need some acknowledgement in scripting and pencilling a comic by himself but this is has been a pretty banal treatment of the Justice League. In fact, with the Rebirth event coming, do we even need this title? As soon as this arc is finished, I’d be surprised if it even continues. 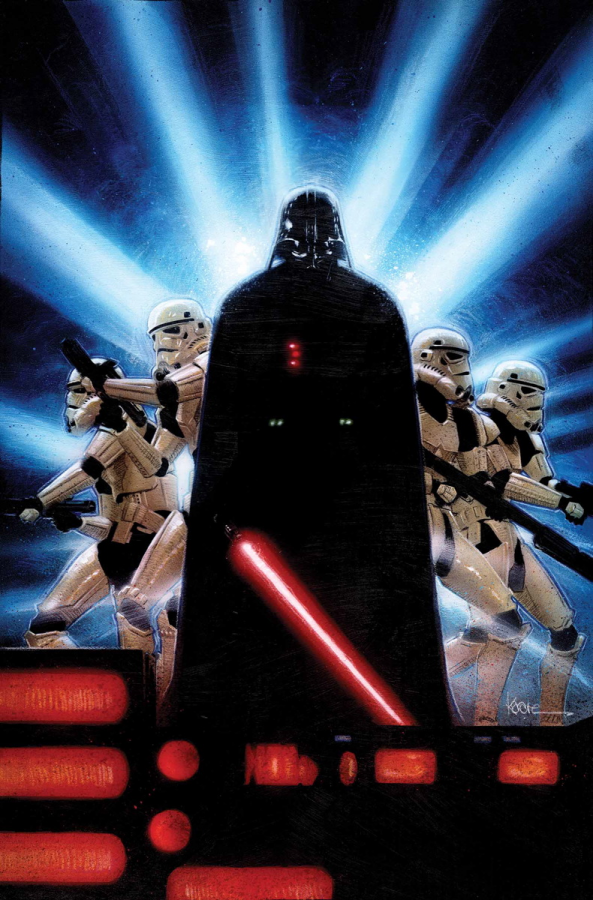 Duplicity reigns supreme in this issue. Wow … the fact that Vader has to consider the tenability of his position always fails to escape me whenever I read this book. However, that’s the dimension that Kieron Gillen never forgets. In all seriousness, writing a comic about one of the greatest fictional villains in the 20th and 21st centuries has to have that political dimensionality in mind. The man is always thinking about living to outlast his competition – which is the way to earn the Emperor’s respect in the long run. It’s a side of Vader that I tend to forget about – as does his opposition.

Gillen remembers this – which is why this guy should NEVER leave this title.

The Pick of the Week: Ragnarok #8

Is it any wonder that the honour for this week go to Walt Simonson’s Ragnarok #8?

Look, Simonson is a legend. He’s a creator that not only has the historical investment to his name but also has the talent to back up his reputation. Ragnarok is a masterpiece-in-development and we are fortunate enough to see it grow before our eyes. Literally, this is comic history being made and his unique perception of the Norse myths and the creative energies to drive his vision forward is nothing short of amazing.

What frustrates me is the length of time between issues. Yeah … I’m vulnerable to the trend of immediate gratification that has deluged this generation of binge-watchers in that I want the story next week, but great art takes time. I am wont to remind my own students that in order to appreciate something, it takes time and you have to let things happen in their own time. It sucks to be on the other side of the coin, but the truth of the matter is: I just have to be patient. When this story happens, rest assured I’ll be right there, buying my copy.

Still – that’s what keeps me up at night: the promise of a good book. I don’t think Walt gets the sacrifice that is involved in the appreciation of his work. But at the same time – it’s a sacrifice that is willingly given. As soon as something as good as his work comes out, you want to talk about it immediately. This is good stuff – it’s probably in the top 5% of the best comic work out there (at the very least) and IDW is lucky to have it.

If this is the type of thing that keep s me up late at night, then it’s definitely worth your while as well. Do yourself a favour: pick this book up; it’s the type of reading that you will love losing sleep over.