I love how comic books have the capacity to evoke entertaining and fun memories of times past. Some comics take me right back to where I was and simply because I was reading the comic, it makes me feel good.

It’s the case with the comics I’ve chosen for this week’s list. Some are actually comics from those years past, but others are new titles that simply remind me of the books that I used to enjoy reading – and that’s a quite a feat.

We take solace in those stories we loved reading then, but we also seek out newer things that remind us of those times past.

Star Trek: The Next Generation – First Contact #1 – ONE SHOT 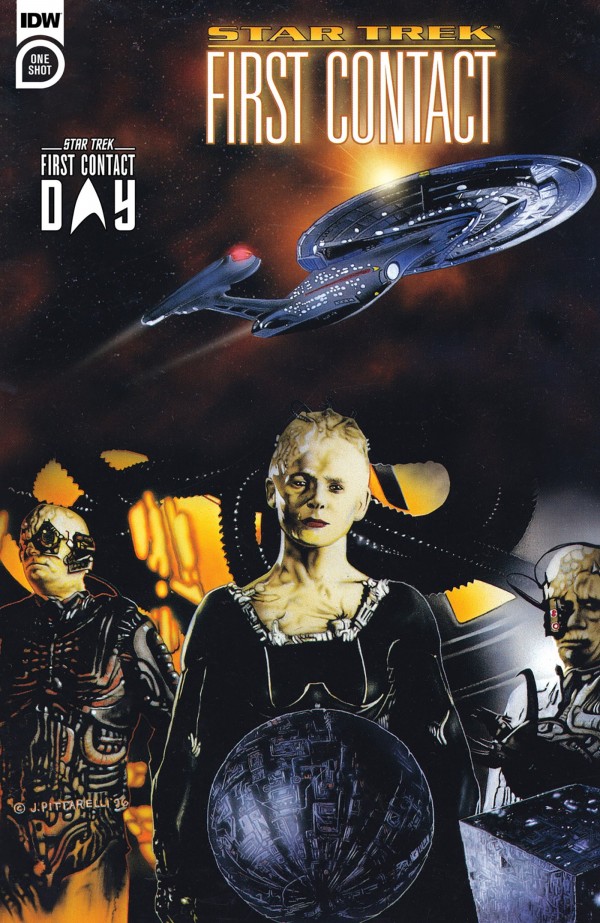 Now this one that takes me right back. First, this is a reprint of the Marvel Comics adaptation of the 1996 Film First Contact, one of the few STAR TREK, non-Captain Kirk films that I love. While I am still a TNG fan, I still can’t discard the memory of seeing the team of James T. Kirk, Commander Spock and Doctor Lenard McCoy in action. They were my heroes and I took every chance I could to record their episodes, play them back and learn the lines myself.

Not so with TNG though. I was older, less given to what might have been perceived as childish pursuits in my awkward teen years.

Now, I just watch and re-watch films over again.

That can be said for this film. It was a TNG film that definitely captured the sense of abandonment that the crew of the USS Enterprise – D felt when they learned that they had been forced back in time to stop the Borg from assimilating the Earth and altering the future of the Federation forever. It was a story of desperation that captured Picard’s sense of violation and this brought the captain and crew of this iteration of the Enterprise back to a more relevant understanding.

Gene Roddenberry had a vision that humanity could better itself by the 23rd and 24th centuries, but if Shakespeare has taught us anything, it’s that Humanity doesn’t change. I think this film made the Federation a little more accessible.

The comic is true to the essence of that story. John Vorhnolt’s writing is spot on in terms of culling the necessary dialogue to fit the scene. Writing for comics is a more precise type of writing than screenplay writing and while he had a script to work from, it’s integral to the flow of a comic to fit the words to the relevant action. Rod Whigham and Terry Pallott have a lot to offer in their rendering of the film’s action as well. Likenesses are difficult, but the essence of the characters’ personalities are present in this adaptation and 1996 doesn’t seem so far away. I enjoyed reading this version of the film back then and what a great memory the re-printing of this book was.

Star Trek – The Next Generation: The Gift #1 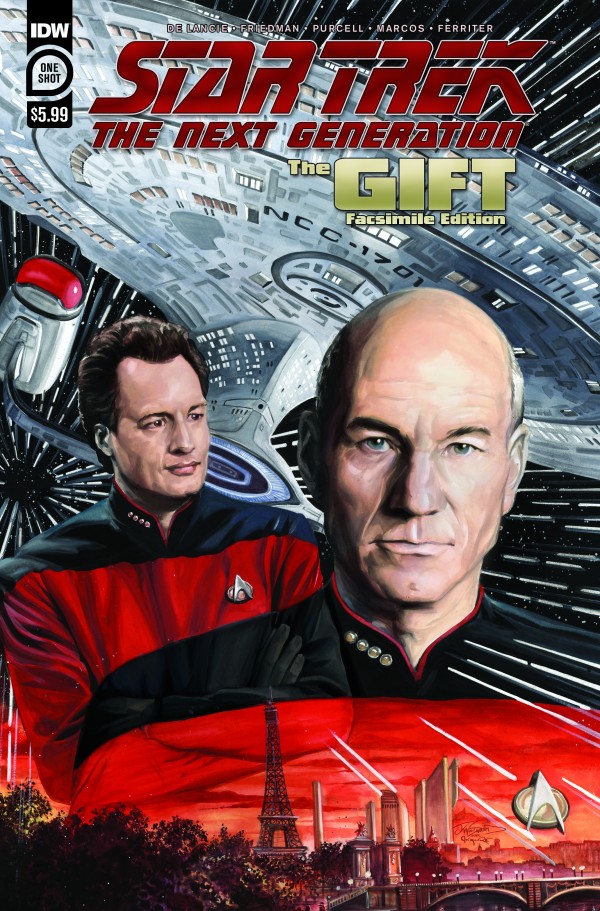 Another facsimile issue but this time of the DC Comics Star Trek: The Next Generation Annual #1 that was originally published in 1990 and featured the writing of Q, himself, John DeLancie.

I’ve met and interview DeLancie and to be honest, that he wrote this issue, that features Q as the antagonist in the story not only brings back memories of watching on television but also recalls the time when he and I (and Q2, Corbin Bernsen) sat on the same stage, entertaining questions from an audience of over three hundred people.

However, it was the pleasant memories of John treating my youngest daughter with such consideration and thoughtfulness that really stands out for me.

Like I said, comics have such a great power.

In this issue, Q manages to wipe the debt clean he resentfully feels he owes Jean-Luc Picard by showing him the value of past losses. While we are fooled into thinking that Q doesn’t understand the threat he poses to the integrity of Earth’s history, he actually shows Picard the fallibility of human passion in making decisions on this magnitude. In the end, he gives Picard the gift of knowing he made a correct decision. Freed form his past, Q believes the debt is paid.

Id love to go back into the offices of DC and ask my friend Robert Greenberger what it was like to work with John DeLancie’s writing – and Michael Jan Friedman’s contributions as well. What a trip down memory lane that would be.

Of course, I would be remiss if I left out J.K. Woodward’s incomparable homage to the original cover of this book done by another J.K. – J.K. Moore, in fact.

In the end, IDW has given its loyal cadre of Star Trek fans a gift in itself by presenting these two wondrous stories. Of course, with First Contact Day on the calendar for this week, I couldn’t think of better gifts than to bring these stories and the work of their creators back to a contemporary Star Trek comic-reading audience. 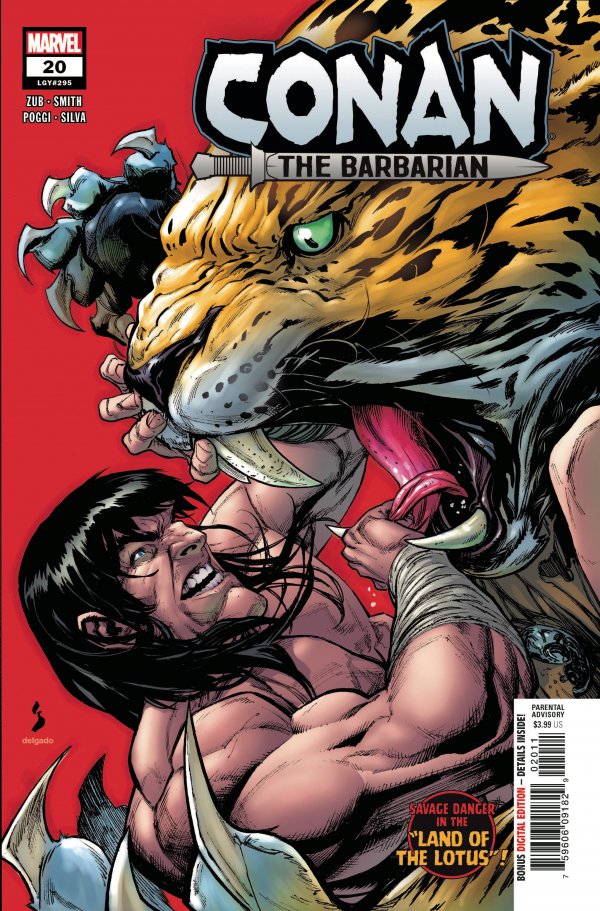 Then there’s Conan. Though this is a new story, Jim Zub was probably like me: a fan who grew up on the pulp-era adventures of this iconic character, and others like him. Zub has effectively captured the essence of those times and made them relevant for a modern comic audience.

The story so far: Conan has found himself in the wilds with his now-fugitive ally, the scholar Meiwei. Escaping from the guards who were to take him to his death, he now finds himself in the camp of the rebels led by Heng the Insurgent. What will the future hold for Conan and Meiwei now?

I used to devour Howard’s Conan with a weekly passion. Finding a new story, though it had been written decades before I was born made me feel like I had discovered a hidden treasure that few other people were aware of. Conan, John Carter of Mars and John Norman’s Gor series all featured heroes who were definitely larger than life and made a ten-year old’s reading experiences not only rich but privileged. I feel like Zub has captured that spirit in his presentation of Conan.

Cory Smith’s work is immaculate. Clean, clear and full of action and intensity – it’s the right work for this savage hero and I can’t wait to see more of it in the next issue.

This may be a new book, but it brings back a lot of memories for me.

It’s my pick of the week. I enjoyed the nostalgia it brought back to me and it’s a pretty good example of the power of comic storytelling in that we can rediscover our heroes, though their stories may be retold by new creators, the essence of what that hero stands for is pretty universal.

We share that common experience and it’s good to revisit our heroes, even though they may be at a new address.

Conan the Barbarian #20 is the pick of the week.

Memories … am I right?

Pick of the Week: Conan the Barbarian #20