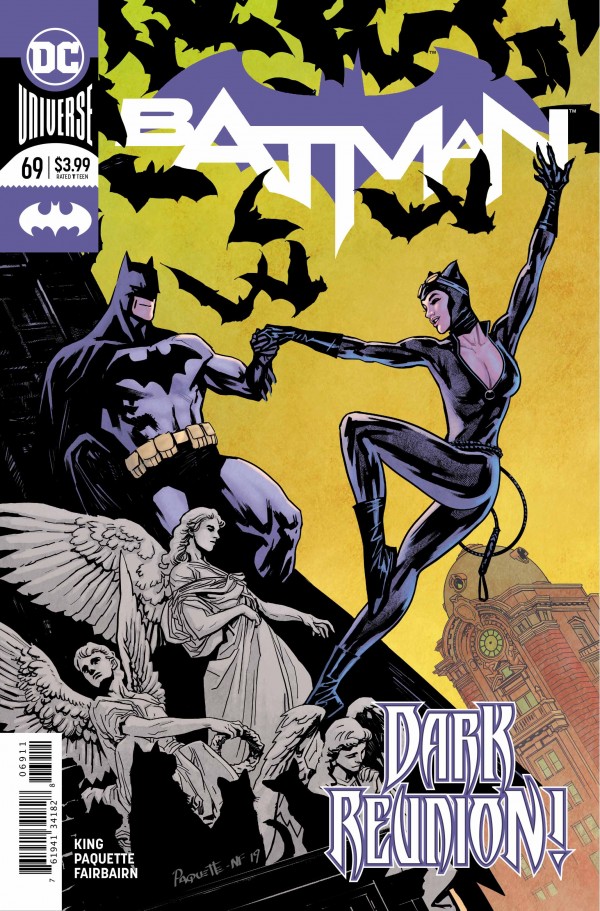 We’re finally seeing the picture of Batman’s state of being coming together with this latest installment of ‘Knightmares’. Strangely, it’s the side of Batman that can’t afford to love anything but being the Batman that is his unlikeliest ally.

We also learn who is behind this assault on Batman’s mind and it’s a curious alliance of his greatest enemies and their abilities. Bane, the Scarecrow’s toxins and Bruce Wayne’s own father from another timeline are the unlikeliest collection of foes that could have been assembled, but Tom King collects them not just for their abilities but for the combined effect of their abilities.

Bane has control of Arkham and is able to provide a resource base of Batman’s greatest enemies. The Scarecrow has a uniquely new formula that presents itself as a penetrating attack that pierces the Batman’s senses and has rendered him Bane’s prisoner. But, it’s the mastermind influence of Thomas Wayne who cheats to win that really makes the difference in this story.

I like that Tom King thinks about the abilities needed to present a challenge to the Batman instead of the individuals. His story isn’t so much about characters as it is about character. In this tale the Batman not only has to face enemies but the sad truth about the failed wedding. It’s not only the worst fear he has had to face but it’s also his only hope of escaping this trap.

Great story and I really have to love the unique and unlikely dynamic behind its construction.

Tom King and Yannick Paquette make a great team and I’d really like to see more of their collaboration in the future. 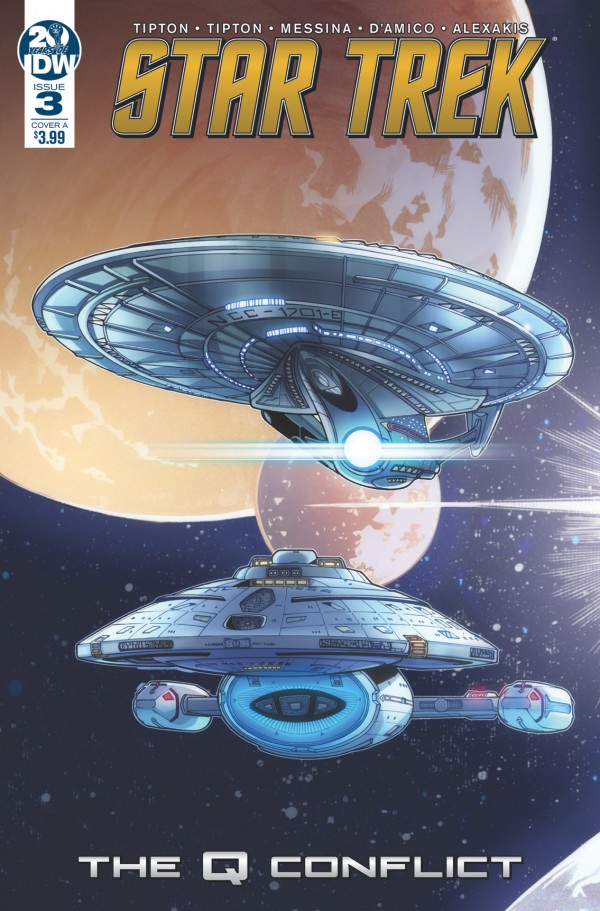 Scott Tipton, David Tipton, David Messina have already proven themselves a formidable storytelling team in previous Star Trek works, but, the last two issues are also an excellent example of taking traditional allies and shifting them around in new relationships in response to the strangest collection of unlikely allies in the Star Trek universe: what I like to call the “Infinites”.

Q, Ayelborne, the Squire of Gothos and the Metron are all beings with infinite capabilities and the latter three present enough of a threat to Q that an outside contest is required to settle their differences.

In this issue, Trelane, the Squire of Gothos, decides upon a battle of wits in the form of “Capture the Flag” amongst starships. However, given Trelane’s usual immature petulance, this game isn’t enough to settle his urge for competition and needs to up the ante by adding the presence of a planet killer from the epic TOS episode “The Doomsday Machine”.

It’s a very entertaining story to see the four starship captains combine their tactical abilities in a showdown confrontation with such a memorable and deadly foe from one of the best episodes of any Star Trek. I’ve always wanted to see a re-match with one of these devices and the Tiptons have an immeasurable repertoire of Star Trek stories and knowledge to draw on and combine to create a story exactly like this. 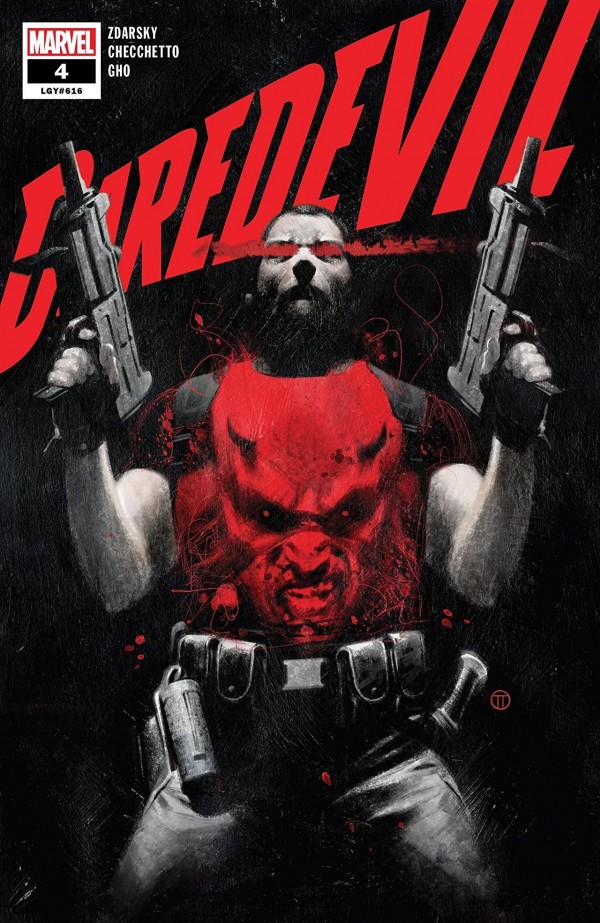 Chip Zdarsky and Marco Checcetto have the Daredevil pegged perfectly in this rebuilding story that rivals the David Mazzucchelli and Frank Miller “Born Again” run, in my opinion.

It’s the unlikely appearance of the Punisher who saves the weakened Daredevil from arrest in the previous issue. While the Daredevil is no friend to the Punisher, he still serves as a moral point of comparison and while Frank Castle may underestimate the Daredevil and see his refusal to kill criminals as a sign of weakness, this story serves to remind us of exactly how super-powered he really is.

The Punisher is relentless in his pursuit of vengeance but the Daredevil’s greatest fear is falling into the same mode. Still, Matt Murdoch needs to be reminded of this and Castle’s presence is that reminder.

But, Detective Cole North, despite his aim to bring the Daredevil in for murder, has all the signals of being one of Matt Murdoch’s greatest allies. It’s a very clear intention but it’s time Daredevil has a new police ally. This type of character arc is very similar to the early Batman stories when the Batman was a vigilante wanted by the Gotham police force. However, Zdarsky is building this type of an arc upon the foundation of an already-existing character who has had – and lost – good police relationships.

It’s an ambitious intention, but it’s also a very entertaining one. I foresee it being a very successful and satisfying one when it runs to its eventual conclusion. 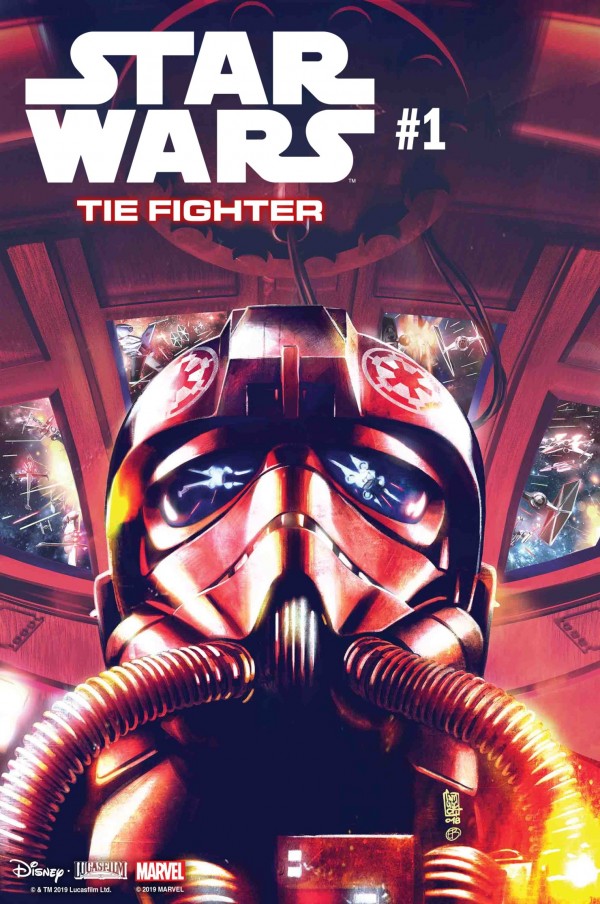 Jody Houser, Michael Dowling and Roge Antonio bring us this unique and exciting look at the men and women who make up the Empire’s corps of starfighter pilots.

Every loyal Star Wars fan knows that the survivability of an unshielded TIE Fighter pilot is extremely low. Depending on agility and maneuverability, the TIE Interceptors are extremely fragile and require great numbers to survive starfighter conflicts. But their pilots are of a different breed, possessed of resolve, daring and even honour – and that’s unlikely to find in the service of the Empire.

This is a story of the people behind those black helmets.

… and it’s one that needs telling. Soldiers are soldiers but despite their different backgrounds they have commonalities that bind them together. Despite social classes, religious beliefs, gender or other characteristics that set people apart, their enemy is what makes them unlikely allies and brings them together.

… But I couldn’t help but notice that the pilots of Shadow Wing were designated TIE Fighter pilots when we could easily see they were piloting interceptors. Little things, but fans see them.

However, shared conflict, even if they are the aggressors and the perceived “bad” side, still brings forth a nobility of sorts. Jody Houser manages to allow us to see the honour amongst the members of Shadow Wing Squadron as well as their character. This reminds me of Joe Kubert’s “Enemy Ace” in which a WW1 German fighter pilot was still the enemy, yet possessed a forthrightness that was admirable despite being on the villainous side. I anticipate more stories of this type from this title, limited as it is in its five-issue run. They are heroes – unlikely heroes, to be sure, but characters still deserving of a good story.

That’s it for this week. Here’s hoping that you receive help from allies in your week, even if they’re ones you don’t expect!