I just did an interview with the propmaster of Star Trek: Discovery for another website today. What I got from that interview was the importance of a love of details. Props are important in conveying ambience and mood, and that’s why details are so important. We’re looking at detailed craftsmanship this week, folks, so without any further delay, let’s get to the list! 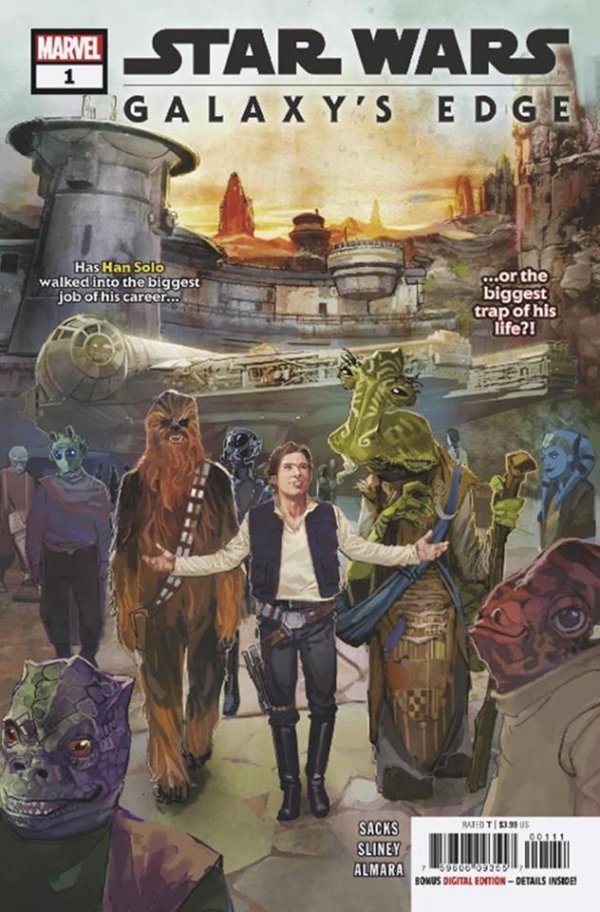 Clearly a pump for the new Disney theme park, the Black Spire is a trading post that hosts the best – and worst of smugglers, rogues and all sorts of rogues.

I thoroughly enjoyed this story from Ethan Sacks and Will Sliney. After all, you can’t go wrong with a Han Solo and Chewbacca story. Great action, authentic dialogue and seeing these fan-favourite characters portrayed with every conceivable nuance a loyal fan could think of is enough for any lover of this franchise.

However, I have a slight caveat …

This isn’t supposed to be their story. While we are briefly introduced to Remx, Dok-Ondar, Kendoh and Wooro, who expertly fit the Star Wars mould, we really don’t get a chance to see them in action, learn more of their backstory or just find out why they’re together in the first place. In fact, the bulk of this book is about a story in the background of one of the supporting characters that just so happens to involve Han and Chewie.

There was something like a 1980’s television series spin-off vibe to this book. You know, when you turn on your favourite show only to discover that it’s about some new characters who are vaguely connected to the mainstays in some way? While you feel like you’ve gotten a good story, you’re not really interested in the guest stars for some reason.

However, in this case, the guest stars are Han and Chewbacca, which is a redeeming factor. Like I said, I enjoyed the book immensely; it’s an incredibly good mini-adventure that allows the reader to spend time with old favourites, but I have to confess that my curiousity about the new characters for this title just wasn’t given the attention they deserved. After all, this is their show. 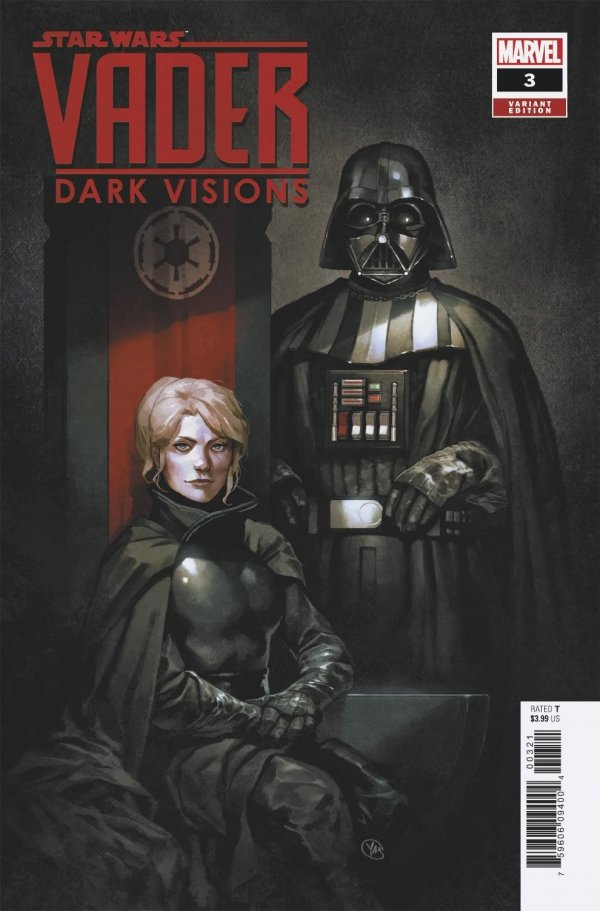 Definitely the most enjoyable Star Wars comic aside from the main title. This book from Dennis “Hopeless” Hallum, David Lopez and Javi Pina gives us yet another insight into the way that the Dark Lord of the Sith has touched the lives of those around him.

In this case … it is through infatuation in this story titled “Tall, Dark and Handsome”.

Who would ever have the lack of awareness to believe that Vader was capable of love? Of course, there’s a great deal of dark humour to this story. It’s an extended tale that is given to rise with a near-psychotically fixated nurse who believes that she and Vader are meant to be in love … together. Her devotion is simple and almost sweet if you deluded yourself into believing that the possibility could happen.

However, the ending is deliciously sweet … and simple. There is an intricate detailing of the responses that Vader would have for this woman and it is a great enjoyment to read. 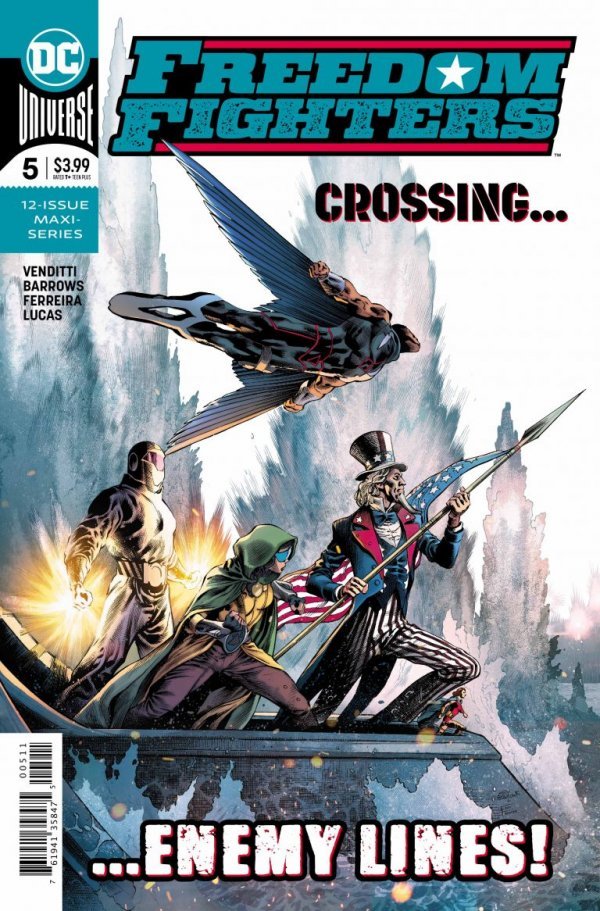 Robert Venditti and Eddy Barrows bring us back to Earth-X, where World War Two ended with the United States occupied by Nazi Germany.

But, of course you know this … you’re comic readers.

However, it takes real skill to imagine the United States of the 21st century in the hands of a megalomaniacal dictator who wishes to quash the rule of law, have underlings declare personal loyalty to him and even circumvent the rule of law.

Yeah, that was a political joke.

In all seriousness though, there’s a time for this book. It’s a reminder about what’s good in America. The return of Uncle Sam to the Freedom Fighters is a turning point in the story because it represents hope against overwhelming odds.

It’s romantic fun and it brings back an enjoyable comic title that saw a great deal of appreciation back in the 70’s and a resurgence during various Crisis incarnations. 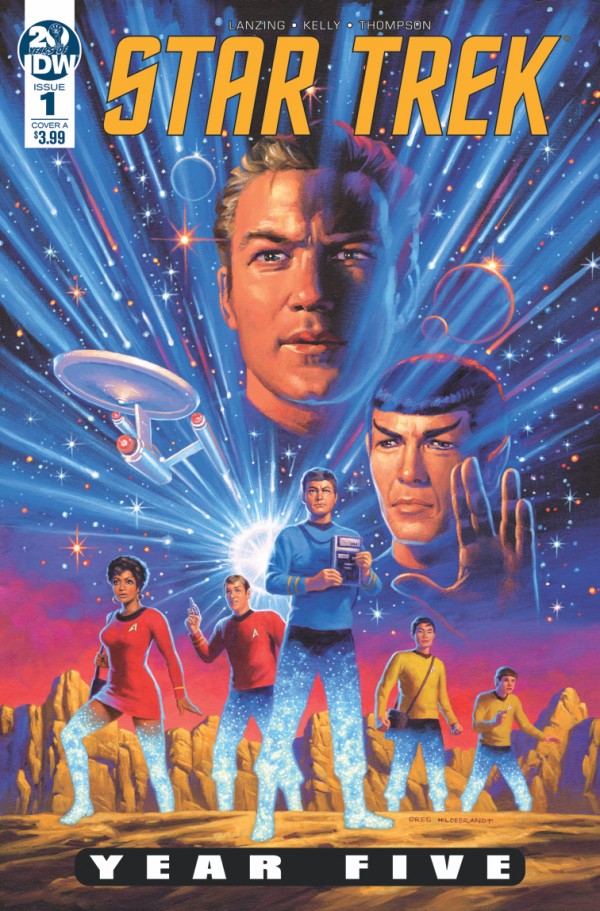 You can’t help but be struck senseless in awe of the cover for this book. Not only are we treated to another Star Trek title from IDW, but three of the five covers are by the legendary Greg Hildebrandt. Jackson Lanzing and Colin Kelly provide us with a script that is phenomenally rich in the texture and content that would be expected from a Star Trek episode script in the last of its five-year mission. Of course, the scintillating artwork from Stephen Thompson is a true pleasure to discover as well.

However, it’s the mood that has been expertly captured in this story. It’s present in McCoy’s exuberance, Sulu and Chekov’s banter, Spock’s elongated, overly logical statements and Kirk’s private, deeply brooding moments. Lanzing and Kelly’s dialogue precisely portrays the right dynamics amongst the characters and even their decision-making process is well-reflected.

This comic is a sheer work of genius art in that it collects the essence of the matured third-season Star Trek that made it such a memorable show.

In this issue, Kirk and crew are coming to the end of their mission and are about to be recalled. Their last scientific mission is interrupted by a distress call. Meanwhile, while all of this is happening, Kirk is pondering being offered an Admiral’s posting when he returns home. Of course, the major dilemma is: he doesn’t want to go home.

It’s a thick and juicy Star Trek story that begins with an event that clearly is at the end of this story arc. Given that this is a regular series and not an abbreviated mini-series, it’s a book that holds a great deal of promise for fans of this franchise. I’d recommend that you adjust your orders wherever you purchase your comics for this one.

It’s the pick of the week in my estimation. Not only is it a work of comic art, but it’s one that holds a great deal of detailed work, and that can only come from creators who not only love the story material they’re writing about, but love intricately crafting the stories.

Until next week, may all that you love to craft bring you the same happiness.