There’s a distinct human theme in this week’s pulls. Humanity in all its various incarnations reflected in art makes for a joyous theme of discovery when reading; so why should comics be any different?

Fantasy makes us take a real look at ourselves and our dreams. Without fiction, how would we know truth? Comics are a perfect medium for my dreams to take root. Every week is an opportunity for my imagination to ignite and yeah – I still get those thrill-shivers up my spine after reading a good comic. So, let’s get to the list for this week; it’s a pretty big one. 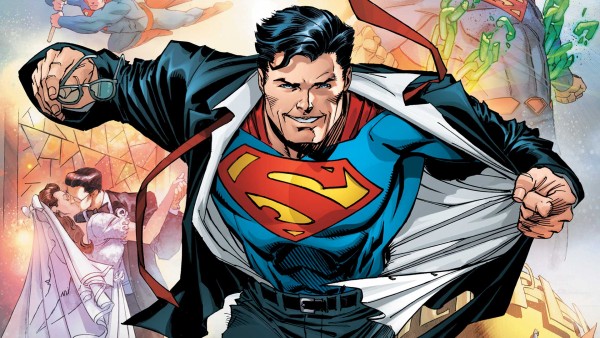 Is there anything more heart-wrenching than watching your family suffer? In this issue, we see Superman try to deal with the aftermath of the Mxyzptlk affair. After all, he DID screw up the Kent continuum, immediately after a major publishing event. Quite frankly I’m surprised the little bugger made off as good as he got!

Andy Kubert’s cover art is simply the right way to start this book.

Superman has a family-guy dimension to his character now. No, not like the Seth McFarlane cartoon, but he’s a husband and a dad now; things like this really have more of an implication and an effect on the Superman story. I mean, Superman hasn’t really had such a meaningful overhaul since the John Byrne days. The New 52 incarnation met with a lackluster reception a few years back, but this incarnation of Superman is a more relatable and enjoyable one. I find myself really enjoying Superman being a dad and seeing Clark Kent impart the wisdom of his father to his son appeals to me on a personal level that is very satisfying. 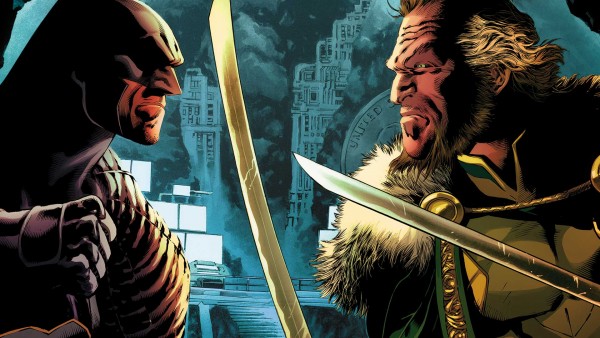 The first impression a reader gets when opening this book by Scott Tynion IV is of a man defending his family. What a powerfully emotional image to start a story with! Though I found the art of Marcio Takara to be a little heavy, but that could be the inking. Still, seeing the Dark Knight facing Ra’s Al Ghul is a daunting image, nonetheless.

Overall, the issue was a little bit of a let-down as we saw the Batcave easily penetrated and Batman a seeming pawn in the machinations of the Grandmaster of the League of Assassins. I had to confess that I felt a degree of disappointment at the apparent passiveness of the Batman. However, I have to take faith that this is a staging issue and the real story is about to come. 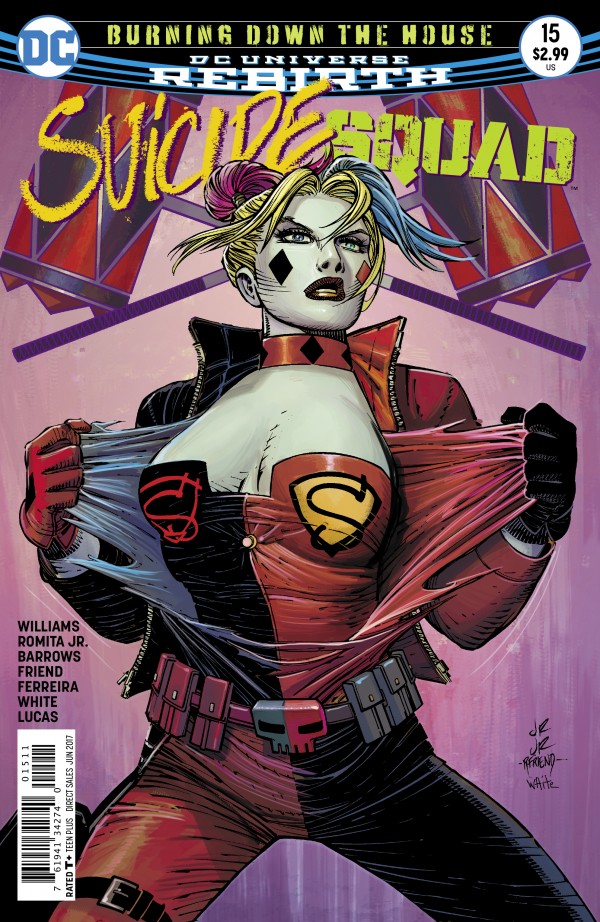 It’s always a great joy to see John Romita, Jr.’s artwork, partnered with Eddy Barrows. It’s also good to see the Squad back in action and for once, on the right side of the fence. A great end to ‘Burning Down the House’ – an engaging arc and one that Rob Williams should be proud of writing. 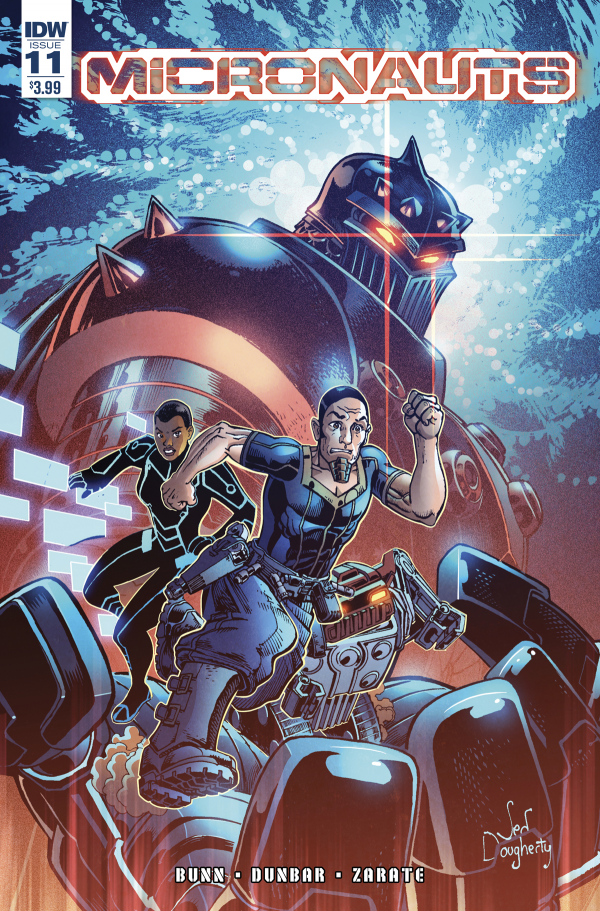 This was the issue in this series that I was waiting for. It’s a great book, and I love the back story that Bunn has been slow-burning, but now that the Micronauts have actually made themselves known to select members of the Macroverse – yeah, this is definitely where this comic is coming to life.

There’s a real sense of growth in the principal characters too. Oz has developed a determination and an acceptance that he is going to have to change his ways if he is to survive this new set of circumstances. Even battle-hardened Acroyear has demonstrated a humanity otherwise not seen in earlier issues. For the better part, I like it.

In as much as this is not the Micronauts comic from the late 1970’s Marvel heydays, it’s cool to see these ultra-cool mini-heroes return to their earlier incarnation of being the minute protectors of the Macroverse. But whether it’s Baron Karza or just some unhinged sociopath who likes to beat on women – these were really cool characters regardless of their toy origins and Cullen Bunn has remembered that, and partnered with Jimmy Johnston and Max Dunbar, have created an original tale that certainly pays homage to the origins of this macro-exciting micro-team.

There’s always room in my reading list for a bad-ass cyborg intent on saving humanity from a threat greater than itself.

Chris Ryall and Christos Gage have scripted a very insightful look into when orders need to be followed … and when they need to be questioned. Of course, the issue of choice is core to the nature of humanity; do we make a choice that ultimately benefits us or do we make one in service of our fellow man? ROM makes such a choice but what’s endearing about this story is the level of believable passion that Ryall and Gage manage to insert into it. Ryall and Gage have managed to transcend ROM’s original dimensions from his earlier incarnation and created a totally novel and exciting character.

I also get my dose of Tony Shasteen’s incredible work on the cover. While I love Tony’s Star Trek stuff, it’s also exciting to see him work on another childhood reminiscence. Where else is this guy going to end up? Fantastic talent.

As an additional note, Bill Mantlo, the original creator who worked on the Marvel incarnation of this title is in a bit of a bad way and could really use your help. If you can, please visit www.billmantlo.com and see if you can help this comic veteran out. It’s the human thing to do. 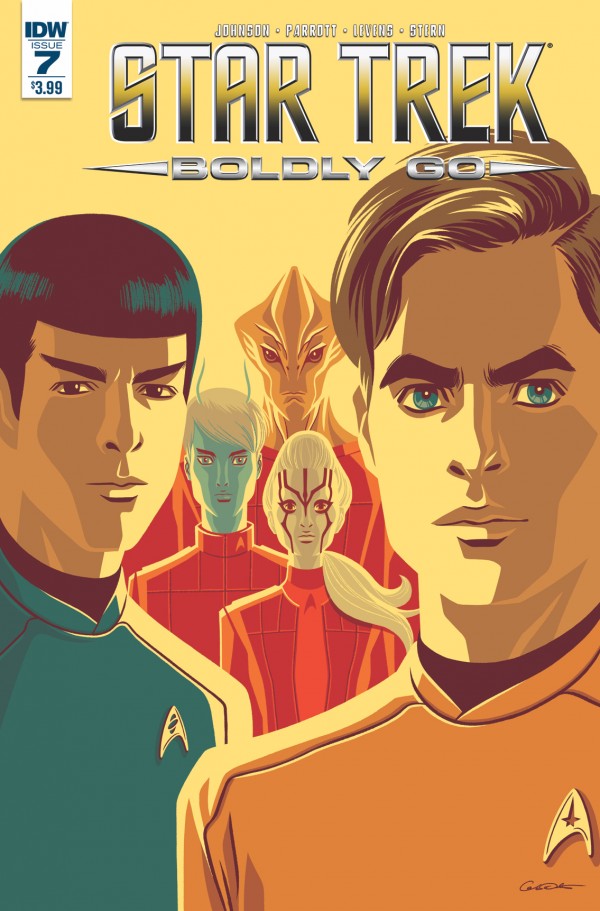 It just feels like I wrote a review on this last week. Oh wait – it WAS last week.

Wow – that was a fast turnaround.

Well, there’s a new artist on this one: Megan Levens. I’m not too familiar with her work, but on first glance, I found it a little too cartoony. Don’t’ get me wrong – it’s not that I don’t like it; but a property like Star Trek has a certain gravitas to it and the art needs to be less informal, if that makes any sense? It needs likenesses and an exact dimension to it. Maybe I’m being too fanboy reverential but that’s just my take.

Still, there’s a lot of meat in this story. Jay’lah makes an appearance as a cadet on board the USS Endevaour (remember her? Probably the most striking part of the third Kelvin Timeline film?) and the idea that the Romulans might be interested in talking peace at the Babel diplomatic world – which is a great throwback to the original series that writers Mike Johnson and Ryan Parrott manage to include for the benefit of the TOS fans out there.

I have to say, that diversity definitely plays a big part in this issue. In terms of races, IDIC, and the number of back-stories that are going on – it’s a pretty extensive story.

It’s hard to overlook the editing mistake though. Apparently, the new communications officer has a bit of diversity when it comes to his name. Lieutenant Murica, or Murcia, as it’s spelled in this issue has an interesting origin as we learned in last issue. It would have been good to see that thread continued but in the context of the larger storyline, I can see that it wouldn’t have worked. Always room for proofreading though.

All in all, it was a passable issue with a tremendous amount of story events and background plots but I am eagerly looking forward to Tony Shasteen’s return to this book.

And then it’s time for Walt Simonson’s mythological take on a post-apocalyptic Thor! Of course, the apocalypse I’m referring to is straight out of the Norse sagas themselves, but the premise posed to us by Simonson is what comes afterwards.

This issue sees a tremendous amount of growth for Thor. Coming to grips with the state of the Nine Worlds and realizing the loss of his family and all that he has known has created a wide distance between Thor and the state of the realms. But the culmination to this second arc shows us a Thor who is looking to restore the worlds as close as he can.

Thor is a forgotten relic trying to reconcile himself to this alien environment. He has been isolated by time and the objects that are of his old life are few in number. So, he forges new relationships with the creatures who now occupy it, brought together by fate and necessity, but in doing so, he also forges friendships and recovers a degree of who he was. The term ‘humanity’ really doesn’t apply to Thor, but whatever it is, new friends and allies have brought him closer to the person he used to be rather than the undead shade he has become.

Ragnarok #12 gets the honorable mention for this week. After all, how does one stoop before the broken wreckage of a life and try to rebuild it? This is a story of loss and reconciliation. After all, the most difficult thing for anyone to do is confront a wrong and try to correct it. Thor has lost everything, but transcends that loss in an attempt to make sense of the new world.

Seeing this husk of a god hug a small child and call her “Snowflake” is probably as human as he will ever be, and it really melted my heart. What an emotional and cathartic end to this story arc, and I can’t wait to see what Simonson brings us in the next one. 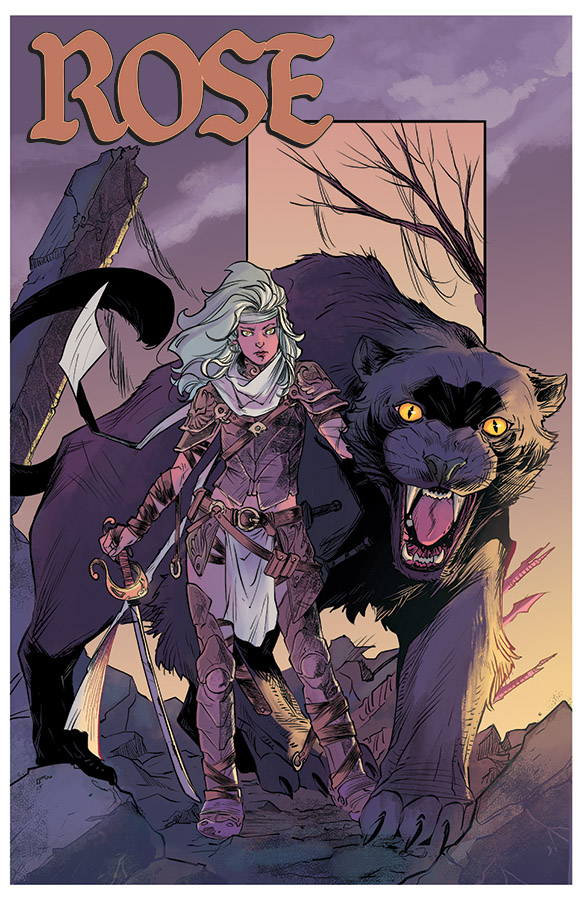 This is the only one on my Image list this week and it’s well-deserving of the solitary status. In fact, Meredith Finch’s Rose #1 is the Pick of the Week for this week’s round-up.

High fantasy combined with classic story-telling and a thoroughly human tale of loss makes this a fable of archetypal proportions. This is the fantasy story you are expecting and want to read. It is well-structured with clearly delineated heroes and villains in a tradition borne out of respected fantasy story-telling.

In this first issue, we learn about the world of Rose; its legacy and rich history. We learn about the world, the way it was in the heroic age of Guardians and their Khats and of the place that magic held in it. In a very neatly structured package, Finch sets up the origin story of Rose and shows us loss on a personal and world level. While Rose loses her family, the world has lost its magical heritage to the whims of an evil sorceress queen that holds the kingdom in thrall.

Ig Guara’s art is completely delightful and, for me, a new pleasure to discover. Finch credits Guara’s art as breath-taking and emotional, along with her colourist, Triona Farrell’s work. This book is clearly a labour of love for Finch and she wastes no time in recognizing her partners, along with editor Andy Schmidt, for their part in this book. Finch’s passion for her work is abundantly present and it is admired.

Finch describes herself as a “slow-burn” writer but I didn’t find anything slow in this first issue. It was the perfectly-paced, beginning what promises to be a well-crafted tale of heroism and rebellion, and those are human elements definitely worth story-telling. We need more good stories in this world and I’m looking forward to seeing this one develop in all its dimensions and am very excited to see this success story grow.

That’s it for this week. In the meantime, enjoy more comics and discovering more about the reality around you.