Comics are cyclical, like everything under the sun. It’s important to remember that. Sometimes the writer has a good arc and then there are bad ones. Good reincarnations of titles occur and then are ones that force you to wonder just what the writer had for breakfast that morning.

There are some titles like that this week. I guess you have to just channel “The Facts of Life”, sing the theme song and delve right in. 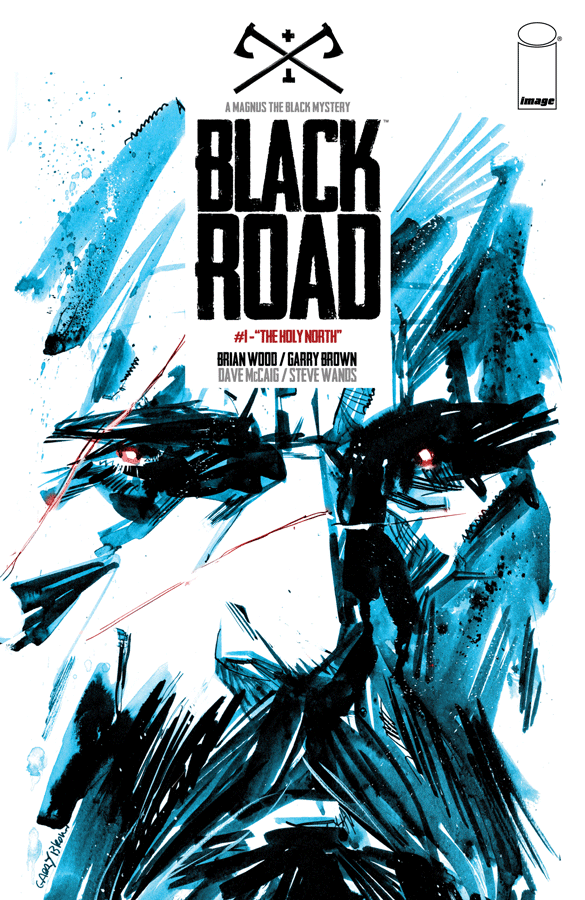 This story really took me by surprise. Written and Drawn by Brian Wood and Garry Brown, it’s a tale that hearkens back to the time between Christianity and Norse Paganism. The Christians have started to acclimatize themselves to this new world and need to work within its constraints. Of course, in comes warrior, Magnus the Black. A mysterious back story in his wake, Magnus sells his sword to a Christian cleric seeking to walk the Black Road.

It’s a real tale of old-world barbarism with compelling characters and a setting that really attracts a reader’s interest. I was immediately drawn to this story and if you’re a fan of ‘Vikings” or “Game of Thrones” then the visceral nature of this story will definitely appeal to you as well. 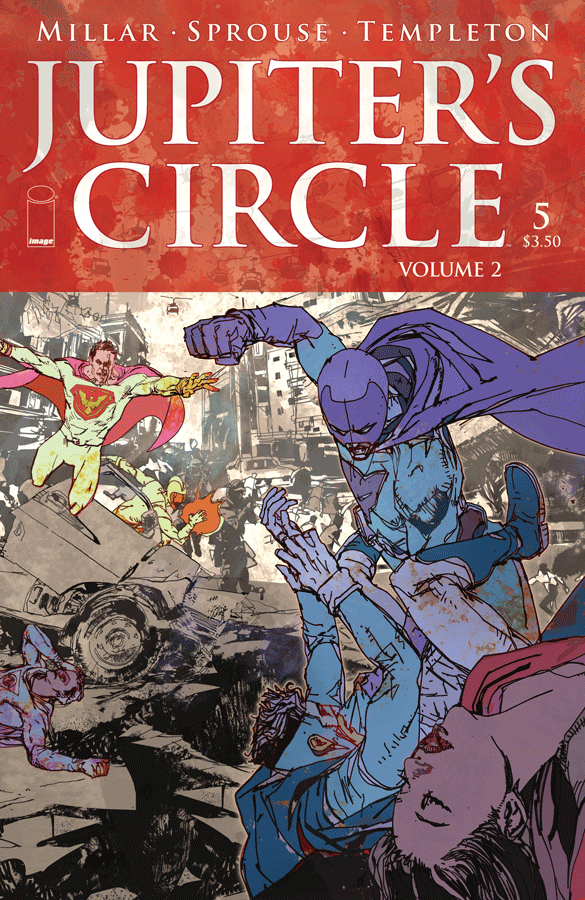 Wow … the dramatic intensity of this book really picked up in this issue. It’s the tempo of this story that really strikes me. It has a variance that’s really astonishing to see develop and it’s so different from any other of Millar’s stories. For instance, in this story, it begins fairly benignly and even has a heartwarming, reconciliatory tone to it, but as soon as you get to the middle of the book: whammo! With just one emotional trigger, the story accelerates not just plot-wise but emotionally. It’s really something to look at and Millar never fails to surprise.

Mark Millar – it’s not just the Scottish heritage we share. Why am I not writing with you?

The division of art responsibilities between Chris Sprouse and Ty Templeton is interesting. It’s a bit jarring but it serves to illustrate two definitely distinctive styles and I am curious to know why that happened. While it is somewhat abrupt, with two really talented guys on this book, Millar is certainly cornering the market on excellence. However, it is good to see Templeton’s stuff getting some love these days. He’s a talented guy and we need to see more of his work. Have to say, I know Quitely is coming back but Mark Millar should really consider working with Ty. He’s a great guy who encapsulates commitment and talent. If you’ve ever attended one of his comic writing classes, you’ll get what I mean. Sorry to see Chris go, though. 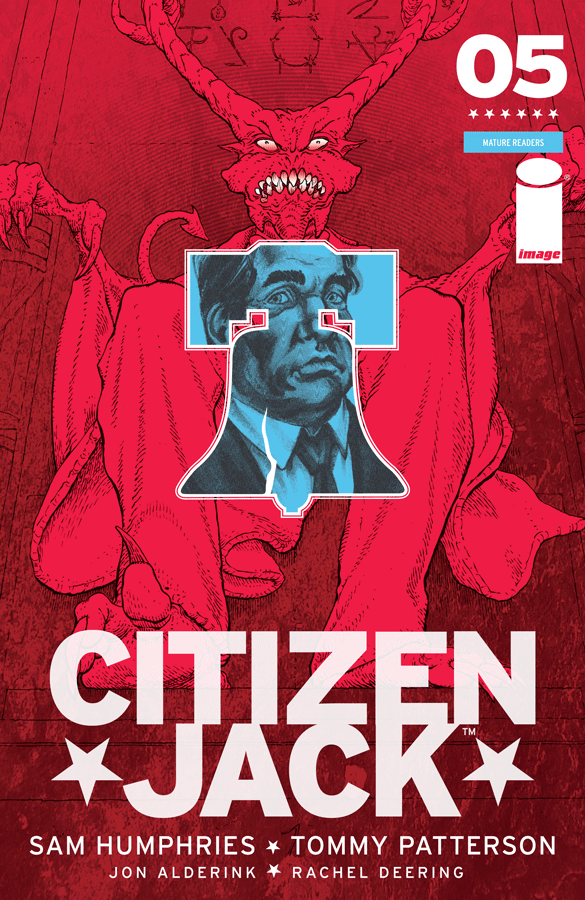 Okay … this is getting sillier. Look, I get satire – I’m a teacher; but this story has now gotten to a new level of ridiculousness. I hate to say this – especially with a dolphin as a main character, but this comic has jumped the shark.

Maybe I’m all “Donald Trumped out” but I think I’m a little tired of the extreme nature of American politics. I live in a country that has three main political parties along with a variety of minor fringe ones. We have choices in Canada that roughly equate to left, right and middle of the road. I don’t see that in the American system, so perhaps that might be influencing my perception of this book. In any rate, I’m a little tired of it now. 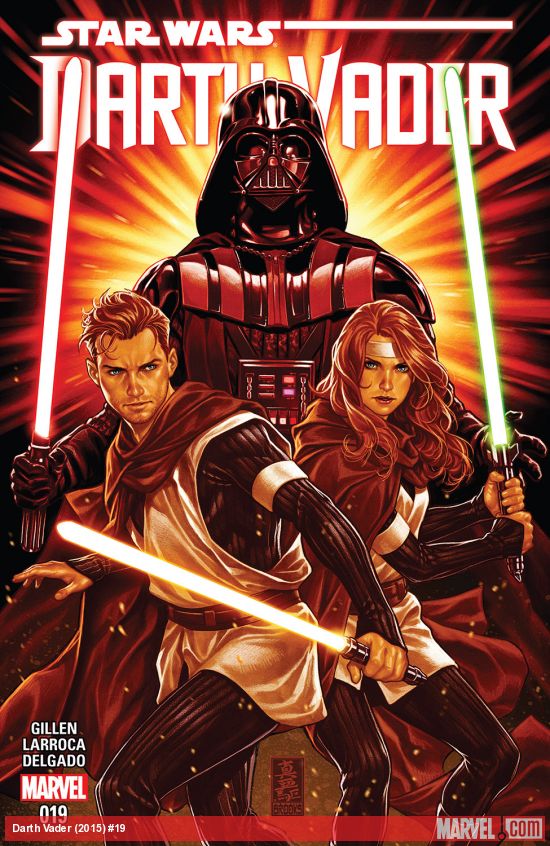 Is it wrong that I am respectful of evil? It’s gotta be the comic because I’m really a nice guy, honestly! Even in my regular Friday night gaming sessions I can’t sneak attack someone and my pals know that I’m just such a softy that I pretty much always lose on that basis.

Yeah … I can’t win a session of Game of Thrones because I’m too nice of a guy and I get royally taken advantage of.

Maybe that’s why I’m loving Keiron Gillen and Salvador Larroca’s Darth Vader. I mean, perhaps it gets to the core part of my character that wants to be bad, because damn, this was good.

From the comic relief-tinged dialogue from Triple Zero (you know, the evil C3P0?) to the traitorous Morit – there was even a nod to Anakin’s transformation to Darth Vader. It’s filled with all sorts of political manoeuvrings worthy of the Dark Lord of the Sith. But what’s really great is the ending. In order for Vader to continue being the villain we love there has to be more to his exile and fall from grace and Gillen still has more surprises in store for us.

What was wrong with the last reboot?

Native Toronto-boy, Jeff Lemire (who lives in my neighbourhood, I’m pleased to say) and Greg Smallwood team up to deliver the first issue of their envisioning of this awesomely dark character.

With this first arc titled ‘Welcome to New Egypt’ I have to say that I am suitably impressed. Lemire is a better writer than artist and I have to confess that I am enamoured with his treatment of the mental instability angle of this character. Lemire delicately dances around Marc Spector’s perception of the world around him in a way that the reader is drawn into his vision and, like Spector, questions if it is all real.

Delusion is a powerful force in a story and Lemire reminds us of this power in a visceral way. It’s almost as if the reader is a part of this story.

So what was wrong with the last reboot? Nothing, but Lemire has certainly read it and thought about ways to improve on it. I look forward to the next issue.

Harley and Her Band of Harleys #1 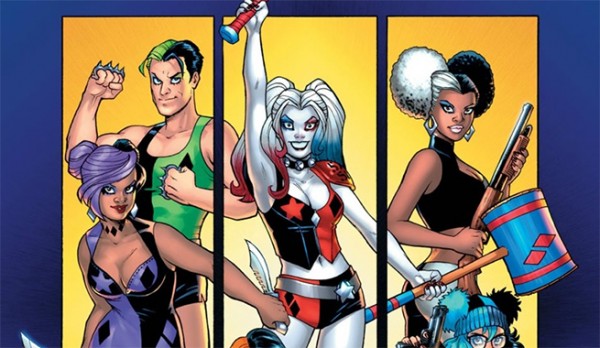 Jimmy Palmiotti and Frank Tieri team up to share writing duty on this book about the Clown Prince of Crime’s love-squeeze. Mauricet pulls pencils and inks duty and is definitely Amanda Conner inspired.

The storyline felt a bit rushed. There was very little introduction to Harley and the gang who were instantly thrown together. Still, I loved Mauricet’s work and there were definitely some funny moments as the Harley wannabes clowned their way around the city in an attempt to find their nutsy leader-chick. 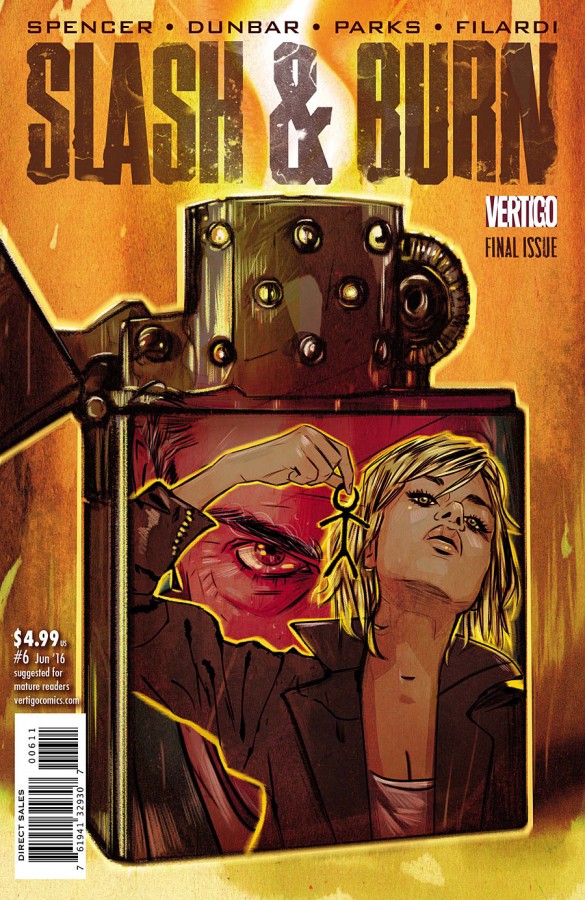 This was a real thinker of a story. I had to read it a couple of times to see if I had missed some details. Very cerebral and introspective but there’s a real mystery going on and it takes the mind of a pyromaniac to figure it out. You have to love the way that the perceptions of the different types of firebugs is introduced in this series. I was really fascinated by interplay between the different types of pyromania. I’m really curious to see what the hardcover will look like.

I have to go with Jupiter’s Circle V2 #5 for this week.

Despite the artistry shift in the middle of the book, it’s the emotional tempo of the book that really struck me. We tend to forget about the human dimension to super heroes and that they are still vulnerable to the pitfalls of human dynamics and personal relationships. You can equate these susceptibilities to the same political limitations as regular people and this is what makes this story so compelling.

The sixties is also a “coming-of-age” period for Western society. If you assign super powers to a person living in this time, they are still constrained by the social limitations of the 1960’s puritanical culture they live in. Despite their abilities they are still constrained by the moral and social perceptions of that time. It’s really intriguing to see those heroes still affected by what society expects them to be and how that informs the generation of people and heroes to come after them.

In short – I love this book. Millar knows what he’s doing and the diversity of his story-telling never fails to entertain.

To continue on with the original premise of this piece, I have to say that Millar never seems to have bad days. If he does, I wish he’d share them with us. They’d probably still be more entertaining than our regular bad days and they’d probably sell more comics.